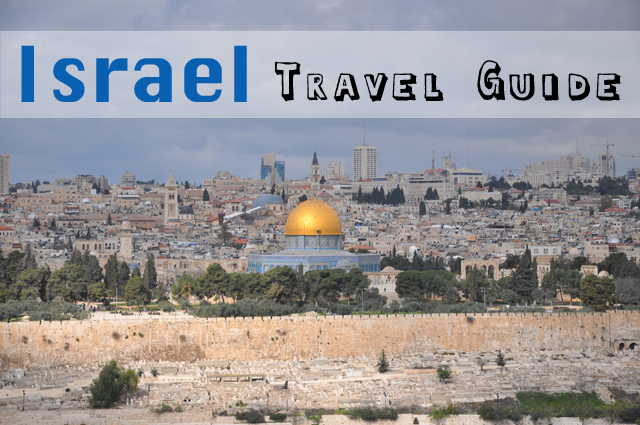 Israel is like nowhere I had previously been before and I loved it so much that I wrote a post about it being my best adventure yet. Not only is it a sacred place for Jews, Christians and Muslims, it also has an incredible landscape with deserts, craters, oases, beaches and geological wonders. If you’re after a relaxing beach holiday you can stay in the resorts of Tel Aviv or Eilat, or float in the salty waters of the Dead Sea. Adventure-seekers can ride camels in the desert, try rappelling in the Mitzpe Ramon crater or endure the hike to the top of Masada. For a small country there’s a lot to do in the Holy Land, with lots of historical and religious landmarks to see.

Read on for my Israel travel tips.

Languages: Hebrew and Arabic are the official languages, but English is very widely spoken. Almost every highway sign is written in English as well as Hebrew and Arabic, plus English language books, magazines and newspapers are readily available.

Beers: Goldstar and Maccabee (there are also lots of microbreweries and pubs brewing their own beer!)

Israel: My Best Adventure So Far

What to Wear in Israel in March

Where to Party in Jerusalem

9 of My Favourite Things To Do in Tel Aviv

Will they stamp my passport?

When I arrived at the airport I was asked if I would like my passport stamped or not. I’m told having in Israeli stamp in your passport can make it difficult to get into some Muslim countries, so if you travel a lot, I would advise you to say ‘no’. They’ll give you a card with a stamp on it and you must present this at your hotel or accommodation in Israel. You could get the stamp if you like collecting stamps but generally it’s probably best not to.

The national carrier of Israel is El Al but there are a few budget carriers that fly to Israel’s Ben Gurion airport from Europe. I flew from the UK to Israel with Easyjet. I suggest you check Skyscanner to compare flight prices and carriers for your chosen dates.

I found getting into Israel to be quite straight-forward, but leaving the country was a lot more complicated. We left our hotel in Tel Aviv four hours before our flight was due to depart and this was for good reason. Security people approached everyone in the check-in queue, asking for information about where they’d been, where they’d been staying and what they’d been up to. Being a blogger, I was actually pulled out of the line and questioned for a good 30 minutes.

Israel gets very hot in the summer months from June- September, when temperatures in Eilat can soar over 40 degrees. Generally it’s a dry heat though and there are predictably sunny, cloudless days. If you want to cool off in these summer months, Jerusalem and more elevated areas aren’t as hot.

The shoulder seasons of April-May and October-November tend to be the best time to visit Israel, when the weather is good but a little milder. Winter (November to mid-March) can get surprisingly cold- Jerusalem has been known to experience snow and coastal areas such as Tel Aviv can experience some rain. In this low season you can benefit from cheaper hotel prices, but remember to pack a coat!

I visited Israel in March and Jerusalem was bitterly cold at night, but mild and sunny in the day. The temperature was perfect for hiking to the top of Masada and doing activities in the desert, but Tel Aviv was rainy. If you visit Israel during Jewish religious holidays, be aware that accommodation costs can double and businesses will close.

Israel is a small country and therefore it’s quite easy to hire a car and drive yourself. Driving is on the right and road signs are usually written in Hebrew, English and Arabic. It’s not necessary if you’re sticking to one of the major cities such as Jerusalem or Tel Aviv, but it’s very handy if you wish to explore lots of different places in Israel. You won’t need an international driving licence, but you will need your home licence with you to be able to rent a car. Most international car rental companies have offices in Israel and there are some Israel-based companies too. You can hire a car at Ben Gurion airport or in most major cities.

In addition to ordinary private taxis, there are also share taxis called Sheruts. These are shared mini-vans that can usually fit up to 10 passengers. The sherut is one of the best and most affordable options for getting around and the destination is usually displayed on the dashboard (signs tend to be written in Hebrew, so if you’re unsure where it’s going, just ask). You can take a Sherut within a city, from city to city, or from Ben-Gurion airport to Jerusalem and Haifa. You can wait at the pick-up spot or hail one down and either hand your money over as you get on to the Sherut, or take a seat and pass your money down to the driver. Best of all you can ask to be dropped off anywhere on the pre-determined route, or just get off at the end destination.

The railway system in Israel is good and an easy way to travel between major cities, but be aware that trains don’t operate on Saturdays (Shabbat). For more information about schedules and fares, you can visit the Israel Railways website.

The bus network in Israel is extensive and you can buy tickets at the city’s bus station, or purchase one from the driver. However, they don’t operate on Saturdays (Shabbat). See the Egged website for routes and timetables.

Two big hotel chains in Israel are Isrotel and Dan Hotels. The best and most iconic hotel has to be the King David in Jerusalem. Hotels in Israel aren’t cheap and the prices increase during the summer months and religious holidays. If you want to save some money, travel to Israel in the low season. If you’re visiting Israel when temperatures are warm, make sure your hotel has a pool or by the sea.

For something more affordable, you might consider an apartment rental. AirBnB is great for booking holiday rentals and accommodation. There are also a number of hostels and budget accommodation options in Israel; take a look at Hostelworld. Here’s a list of some of the most popular hostels in Israel:

Is Israel safe to travel?

When announcing I was going to Israel, some of my friends responded, “Is it safe?” While Israel has a turbulent history and Israel-Palestine conflict still exists today, what you see on the news isn’t representative of what you’ll experience as a holidaymaker. I felt no less safe than I would walking through the streets of London or anywhere else in the world. I felt safe as a solo female traveller and enjoyed every minute of my trip.

However, I’m aware travel in places near Gaza and the West Bank poses more risk. I haven’t visited these areas, but the UK government website advises against all travel to Gaza and says, “Be extra vigilant and take great care when travelling anywhere in the West Bank, particularly in areas close to refugee camps, in and around Israeli settlements across the West Bank and in the cities of Jenin, Nablus and Hebron.” As a tourist you can book tours to these areas- Green Olive Tours are very popular- but generally it makes sense to monitor local media reports and avoid protests or demonstrations.

For up to date information on safety in Israel, you can read the info on the UK government website.

In the summer pack light clothing- bathing suit, short-sleeved shirts, vest tops, shorts, dresses and sandals. Pack something more modest for visiting religious sites- perhaps a long sleeved top and long skirt or trousers. It’s also a good idea to bring a light jacket for the evenings because nights in more elevated areas can be cool.

If you’re visiting Israel in the winter, be prepared for cold weather and rain. While the climate is still much milder than many places in Europe, it does get wintry. Take jeans, sweaters, a coat, scarf, gloves and umbrella. If you’re visiting in the shoulder season when the weather is changeable, read my post on what to wear in Israel in March.

Many cities in Israel, including Tel Aviv, Haifa and Eilat are modern and very westernised, so anything goes when it comes to clothing. However I dress a bit more modestly in Jerusalem and be respectful when visiting religious sites, ultra-Orthodox Jewish neighbourhoods or Arabic neighbourhoods.

I absolutely loved the food in Israel. The best meal of the day is definitely breakfast and I found the self-service breakfasts in Israel to be extensive, with mainly cold options like cheeses, smoked salmon, salads, vegetables, hummus, tahini and baba ganoush. Eggs are also made to order.

Try a shawarma for lunch and stop for a glass of the most amazing fresh orange juice you’ve ever tasted. When visiting the markets, you can purchase some halva– a sweet snack made from sesame. While Israel doesn’t have an official ‘national dish’, many consider it to be falafel….mmmm…falafel.

While foods such as pork and shell-fish are restricted because they aren’t kosher, you can occasionally find these things on the menu in non-kosher restaurants, particularly in the cosmopolitan city of Tel Aviv.

Wi-Fi is available in many cafes and restaurants. You can use Wi-Fi in hotels, but I found many of them charged a fee by the hour or per day, which can add up. For more information, I highly recommend you read these Israel Frequently Asked Questions.

Things To Do in Israel

There are so many amazing things to do in Israel, but here’s a rough outline:

Did you like this guide? Bookmark the page and check out some of my other guides!