When I announced I was visiting Los Angeles for the first time, all of my Californian friends insisted “you’ll need to rent a car.”

The reason for this is Los Angeles is a sprawling city with lots of neighbourhoods and suburbs, plus the public transport system isn’t as efficient as somewhere like New York. Most people use a car to get around so it’s considered kind of weird to see Los Angeles without a car. 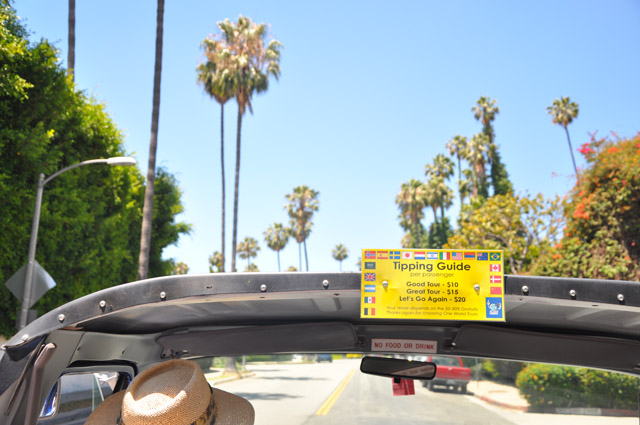 I have never driven on the other side of the road, and I wasn’t sure I was ready to do it in LA traffic. You can get some good rental car deals from the airport so it’s fairly inexpensive, but I felt really anxious about navigating my way around LA.

Was I crazy to even try to get around LA without a car?

As it turns out, it was easier than I thought. I successfully spent 5 days staying at USA Hostels Hollywood and used a mixture of transportation methods to get around.

Here is how you can see Los Angeles without a car:

When you land at LAX and walk outside arrivals you can catch one of the Super Shuttles into the city. You can make a reservation online, or you can simply pay the driver like I did. The cost is $16 one-way or you can get a discount on a return ticket. It’s a shared van service so you will visit various locations dropping people off, but it will drop you off at the door and is excellent value for money. Try one of these discount codes if you want to save a little bit more.

Since hotels in Los Angeles are very expensive during the summer months, plus I was traveling alone, I stayed at USA Hostels Hollywood, which is right off Hollywood Boulevard. This set me back about $50 per night. I would recommend either staying in a hotel in the Hollywood/Beverly Hills area (think the W Hotel, The Hollywood Roosevelt or the Beverly Wilshire) or down at the beach in Santa Monica or Venice.

I love to walk as it allows me to stay in shape on the road. I actually walked from Hollywood Boulevard all the way to the Hollywood sign in the hills because the buses were on strike that day. I waited at the bus stop for around 45 minutes until eventually a guy waiting at the bus stop suggested walking there. I ended up getting my exercise for the day as it was all uphill, and I made a new friend.

In LA the distances are pretty far, but it’s pleasant to walk around if you stick to a particular neighbourhood. My hostel ran various walking tours, including a walking tour of the celebrity homes. There are lots of open top buses that will take you to see the celebrity mansions, but by walking you can get right up to the gates to take a look.

I walked a lot around the Walk of Fame area, and I also walked between Santa Monica and Venice Beach.

If you decide to stay down in Santa Monica or just visit for the day, you can rent bicycles and bike along the beachfront between Santa Monica and Venice. For more information about biking along the coastal path, visit the Santa Monica Bike and Park website. 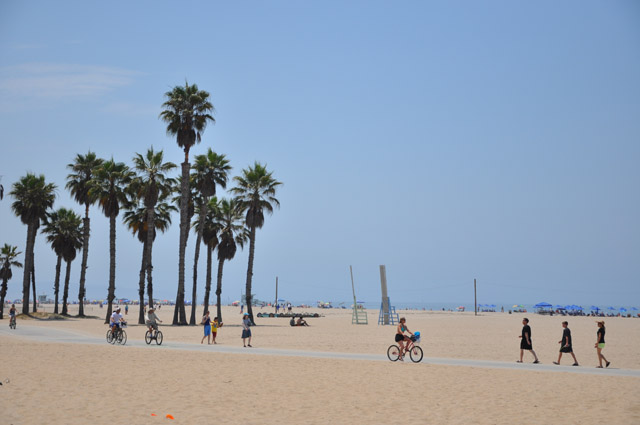 When I arrived at my hostel they gave me a sheet of paper with directions to all the major sights by public transportation. It IS possible, but the problem is it takes a long time. You will often have to switch buses 2 or 3 times, but the fares are cheap at $1.50. You can pay for it in cash (must have the exact fare) or you can buy a plastic TAP card in the metro stations and preload it with money so you can pay-as-you-go. Various people had told me that the buses in LA are full of crazy people and weirdos, but I didn’t find it to be a bad experience at all. I took two buses to get from Rodeo Drive back to Hollywood Boulevard; they were both fine and practically dropped me door to door.

The Hostel Hopper really, really rocks. But it’s not like taking your average taxi or some shared shuttle ride, oh no. It’s kind of like getting a ride with your best mate or your relative. One of their super fun drivers stops by the hostel to pick you up in a new 7-seat passenger car equipped with Wi-Fi internet access and an iPad for choosing your own music! 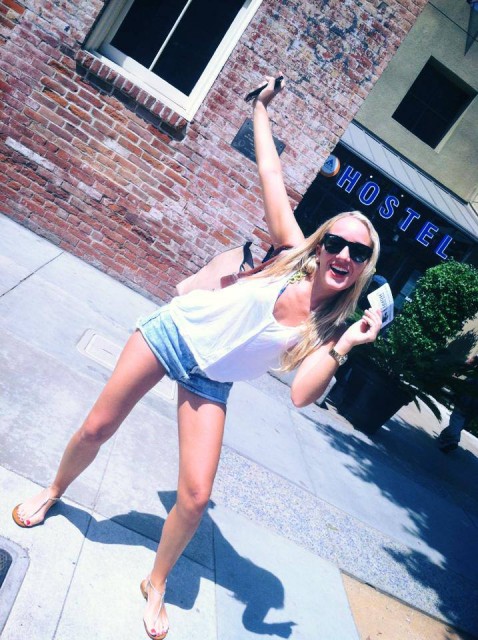 I used this service twice to get from Hollywood to Venice Beach, and at $15 round trip it is worth every penny. The second time I used Hostel Hopper my driver was Lauren, the owner of the company. She and her husband Rafa met in a hostel in Uraguay believe it or not! After several years working in tourism in Southern California, they came upon the sweet idea of Hostel Hopper, making it easier for backpackers to get around. You can tell they are really passionate about working with travelers and they have so much energy.

On my first trip to Venice Beach I spent the entire time talking to the driver and getting her recommendations for what to do in LA. She took me on a quick detour to see some of the beautiful tree-lined neighbourhoods and she even called her friend to ask the name of an old-school cinema I should check out.

The drivers are super flexible too; you just tell them which time you would like to be picked up from the beach (there is a choice of return times), and they will be there! If you change your mind you can just give them a call and let them know. Definitely my #1 choice for getting around.

I barely used the LA metro because it didn’t seem to take me to any of the places I needed to go, but I did use it when I needed to go downtown for the BET experience. I bought a TAP card and a day pass for $5. The metro was pretty much like every other metro I’ve experienced in the world…a way to get from A to B underground.

If you visit the Walk of Fame in Hollywood there are lots of people selling tickets on these open-top bus tours that visit the celebrity homes. I was walking down the street with a girl I met in the hostel and we were offered huge discounts on these tours. That’s because we weren’t really interested so we carried on walking. Eventually we were offered such a ridiculous price for the tour that we did it, and we asked to get dropped off on Rodeo Drive on the way back!

So moral of the story, pretend you aren’t interested, walk away and they will lower the price.

Getting out of LA

If you are heading up to San Francisco then the cheapest option is taking the Megabus. I have taken the Megabus many times and find it to be far superior to the Greyhound. Not only is it super cheap, but it is much more efficient, has free Wi-Fi and is WAY nicer.

Alternatively I would take the Amtrak train which offers scenic views of the coastline. The Pacific Surfliner will take you to San Diego and the Coast Starlight can take you as far as Portland and Seattle.

Alternatively Hostel Hopper do a door to door shuttle service between LA and San Diego for $40 each way.

Have I missed anything? Have you used public transportation in LA? What did you think of it? Leave Your Comments below!

19 thoughts on “Seeing Los Angeles Without A Car: What You Need to Know”