For my A to Z of Barbados challenge, my Barbados flights from Manchester to Bridgetown were with Thomas Cook Airlines. I’ve flown lots of airlines over the years but this was my first time travelling with them, so I’ve documented the whole experience in this flight review. 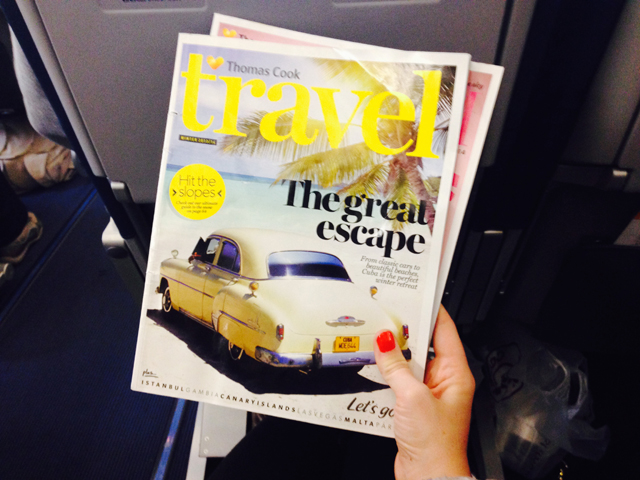 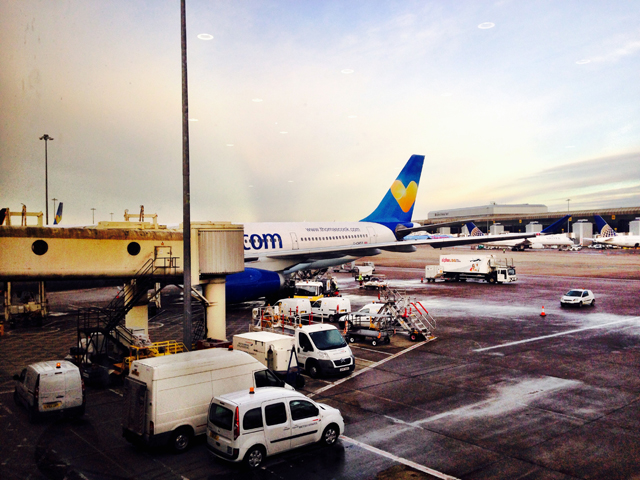 The check-in experience at Manchester airport Terminal 1 was a breeze. There was a bit of a queue, but once we made it to the check-in desk we had our boarding passes in a matter of minutes. The flight boarded and took-off on time, so everything went very smoothly.

A note about baggage and seat selection:

If you wish to select a seat you will also have to pay a fee to do so; the price varies according to whether you would like a standard, extra legroom or front row seat. If you wish to save some money, you can now purchase a bundle deal, which consists of 20kg hold baggage, in-flight meals and seat assignment. 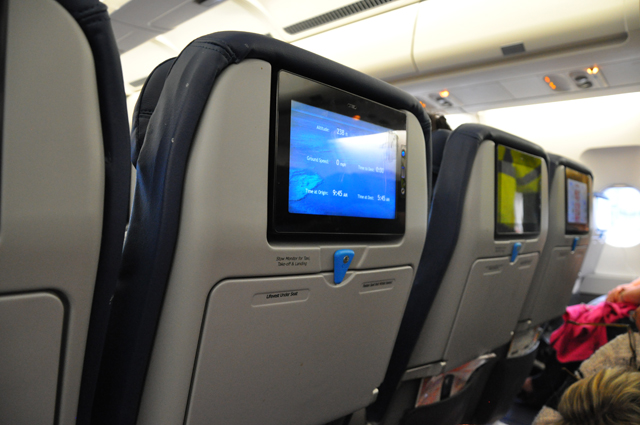 On the Airbus A330 to Barbados we were sitting in the front section of the aircraft in seats 6D and 6E. These seats definitely felt more roomy than the seats further back in the aircraft (we experienced these on the way home) and I could stretch out my legs easily. I’m told that actually all the seats on this aircraft have 33inches of legroom but because of the design of the seats, the living space is much more than you’d expect, so the perception is that it’s a larger legroom pitch.

The aircraft is all one class at the moment- Economy- but Premium Economy is to follow later this year. 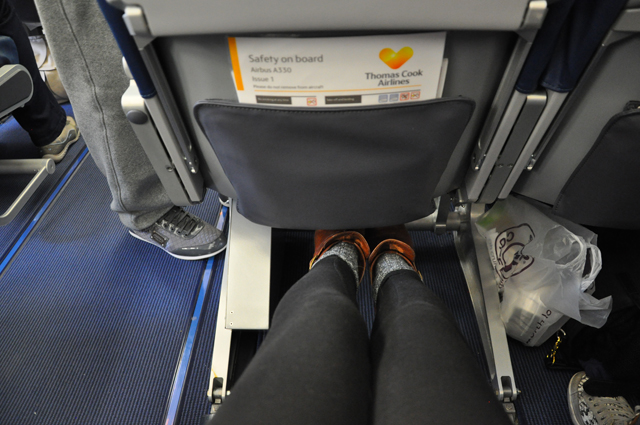 On the return leg back to Manchester we were positioned further back in the aircraft. This time we had two seats by ourselves, so I had the aisle and my friend Elle had the window.

I like to get comfortable on the plane but we weren’t provided with any pillows or blankets, or a little amenity kit with flight socks, toothbrush, toothpaste and earplugs. This is something I have come to expect from long-haul flights and I would like to have seen these available on the flight. A representative from Thomas Cook Airlines tells me that they are looking at a more scheduled service as a result of similar customer feedback, which is good. Luckily I had packed my own little in-flight kit and some extra layers in case it got cold, but I would recommend you bring an inflatable pillow in your bag.

On the outbound journey I spent a good few minutes examining the seat to see if there was any way to get the seat to recline (there is usually a button in the armrest), but I had no such luck and I didn’t spot anyone else with their seat reclined. It was only on the return journey that a gentleman across the aisle pointed out that he had discovered a lever under the seat that makes the seat recline, and gradually the word spread!

You must pay for the snacks and drinks onboard the aircraft and to be quite honest, I always resent paying any extra on any airline, so I brought my own bottle of water and snacks from home. When flying long-haul I am used to being able to take advantage of a free bar and maybe the odd glass of wine, but in this case I didn’t purchase anything when the trolley came round. You can see what is available in their magazine- ‘Cafe Cloud- Bar & Bites’.

When it comes to meals, Thomas Cook Airlines’ flight-only fares do not include an in-flight meal, but you can purchase meals for an additional cost, starting at £6.00 per adult per flight on short haul flights. When on a package holiday you should check your invoice to confirm whether in-flight meals are included.

I’ve stated many times before that I am not a fan of airline meals (neither is my best friend Elle who was travelling with me), but we both agreed the inflight food on Thomas Cook Airlines was rather good! The meals are created by celebrity TV chef James Martin and come in a box bearing his portrait and the words, “Good, satisfying comfort food made with quality ingredients.” 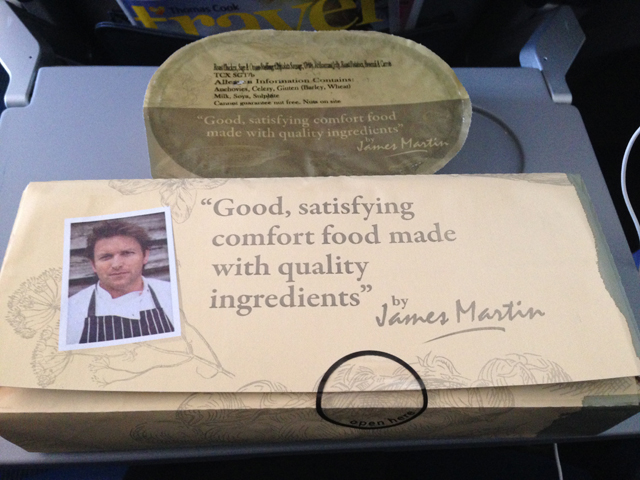 There was a choice of inflight meal (chicken or beef) and I opted for the roast chicken with sage and onion stuffing, chipolata sausage, broccoli, carrots and gravy. The chicken was nice and juicy and nothing was overcooked- it was tasty! The meal came with a packet of cheese and crackers, and I was surprised to find one of my favourite cheeses inside- brie- along with ‘Butler’s Secret’ special reserve cheddar! This just made my day as usually you just get a stick of cheddar and a couple of biscuits. Throw in some brie and a tub of fig and date compote and you have something a lot more gourmet! There was also a Belgian chocolate mousse with banoffee and crumble, a bread roll with a little portion of lurpak butter, and a Lily O’Brien’s miniature chocolate. Afterwards the cabin crew served complimentary tea and coffee as part of the meal, so I took advantage of that. 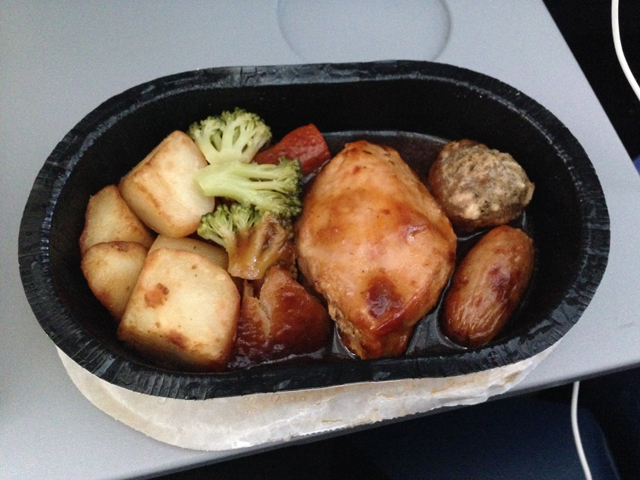 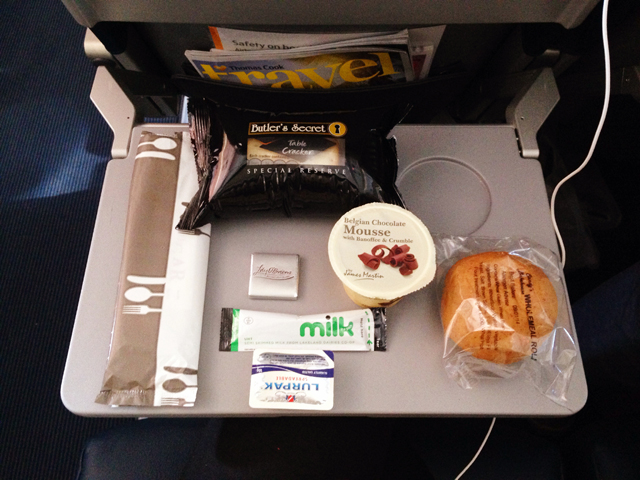 The second snack served to us before landing in St. Lucia was a cream tea, with two little sandwiches, a sultana scone, jam, clotted cream and tea or coffee. Again this was a very satisfying afternoon bite to eat and consisted of quality ingredients, which makes a huge difference. 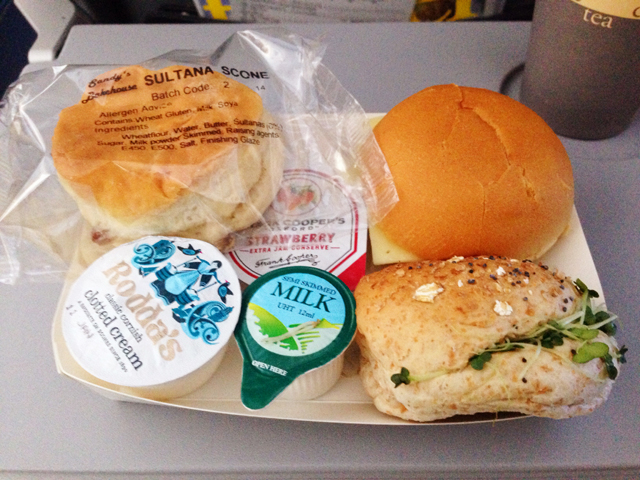 On the return overnight flight from Barbados to Manchester we were given an evening meal before bedtime, then breakfast just before landing. The breakfast included a tub of pure orange juice, a fat free yoghurt, a muffin and a cup of tea or coffee. 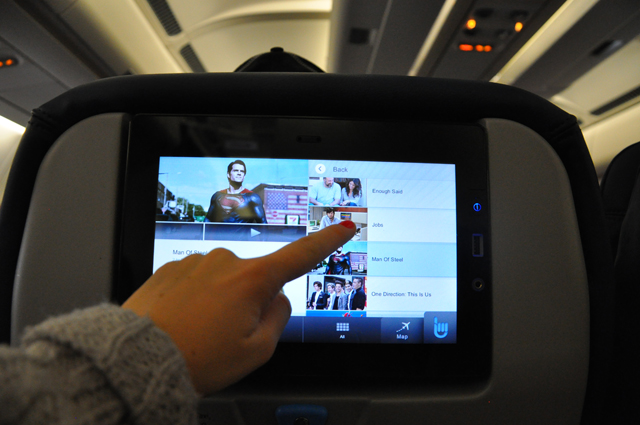 All the seats on the A330 are fitted with seat-back entertainment systems that allow you to see details of the flight, listen to music and watch movies or TV programmes.

I loved the modern, up-to-date touch-screen interface and this was better than many of the entertainment systems I have seen on long-haul aircraft. Unfortunately there wasn’t a huge selection of movies or TV shows, but I did find something I wanted to watch- Jobs, the life story of Apple boss Steve Jobs. I brought my own earphones, but if you don’t have your own there are headsets available for purchase. There is also a USB port to the side, which came in useful for charging my iPhone using a USB cable.

When flying with Thomas Cook Airlines the Economy Class was a good experience in terms of seat, friendliness of staff and quality of inflight meals. However, I have become accustomed to things like blankets, cushions, a complimentary mini-bar and meals on long-haul airlines, so I would point out that you have to pay extra for things like snacks, drinks and headsets on this particular airline. If you book a flight-only ticket, expect to pay an additional fee for seat selection, meals and checked baggage. The flights from Manchester to Barbados are cheap great value  though, so that’s clearly how they keep the fares low; by offering a service where you can tailor what you want.

The flight itself was on time and the cabin crew were very friendly and helpful. The highlight of the flight was definitely the inflight meals by James Martin, and this was definitely some of the best food I have tasted from any airline. For Economy Class the seats felt spacious, and the entertainment system was very easy to operate. All in all it was a pleasant flight and I would fly them again to get to the Caribbean as they seem to offer cheap fares. Best of all, they fly out of my home city!

You can see a video of my experience on Youtube below:

My flights were complimentary, provided by Thomas Cook Airlines for the A to Z of Barbados Challenge with Travel Supermarket. All opinions expressed in this review are my own. For more information about holidays to Barbados, you can visit http://www.thomascook.com/