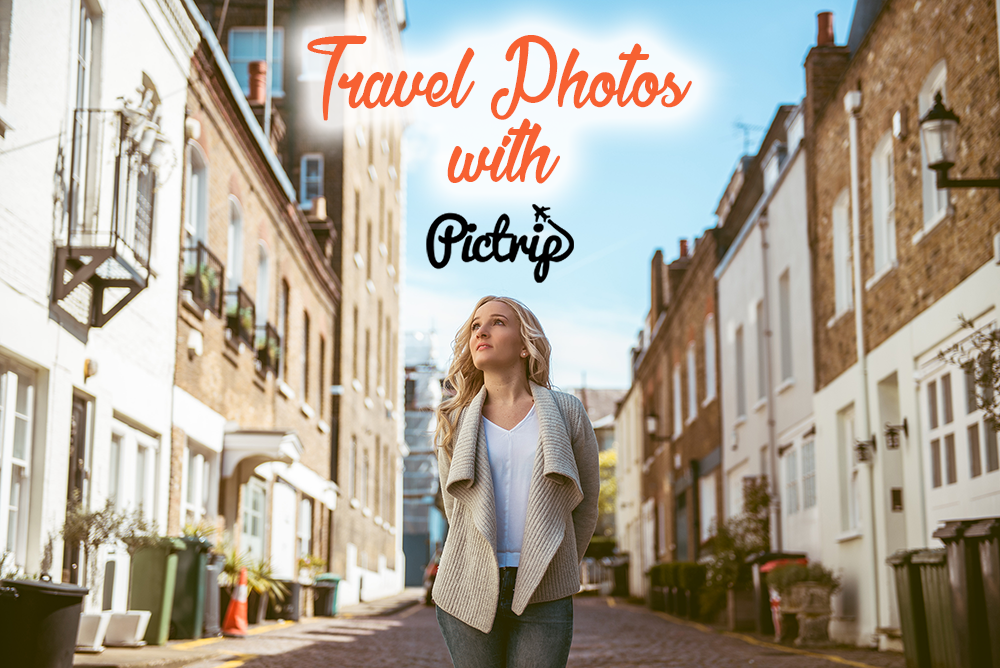 09 May Pictrip Review: Vacation Photos Taken by a Professional

Even though I’ve travelled to countries all over the world, I don’t have many great pictures of myself.

I ask a passer by to take a photograph of me but end up with my feet chopped off or something poking out of my head.

I repeatedly try to take the perfect selfie, which is usually grainy from the quality of the phone camera anyway. 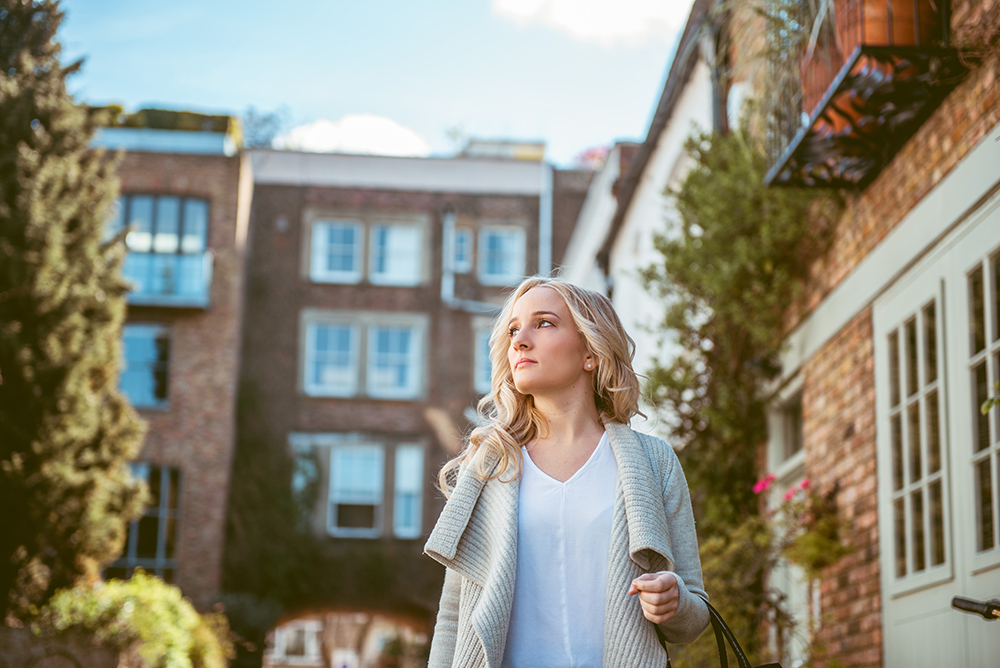 I’m constantly scrolling through Instagram and see bloggers who look perfectly groomed, immaculate and just damn incredible and I think ‘How on earth did they do that?’. I can imagine they either spend a lot of time with a tripod and timer, or they have photographer friends/boyfriends who take pictures for them. As a solo traveller, sadly I have no such travelling companion.

Hence why the idea of a destination photographer is such a good one.

With the advent of apps and new technology, there are numerous platforms popping up that are designed to make our lives easier, including our travels. There’s Air BnB for accommodation, Uber for transport and now there’s the whole concept of a vacation photographer too.

Lately I’ve seen more and more of my friends on Facebook getting engaged abroad and hiring a local photographer to capture the moment. It’s a fantastic idea really.

Destination photography isn’t just for proposals and anniversaries either. You can use a destination photographer to get some great family shots to frame and keep, or just some beautiful portraits of yourself, which aren’t taken against a stuffy corporate-looking setting. 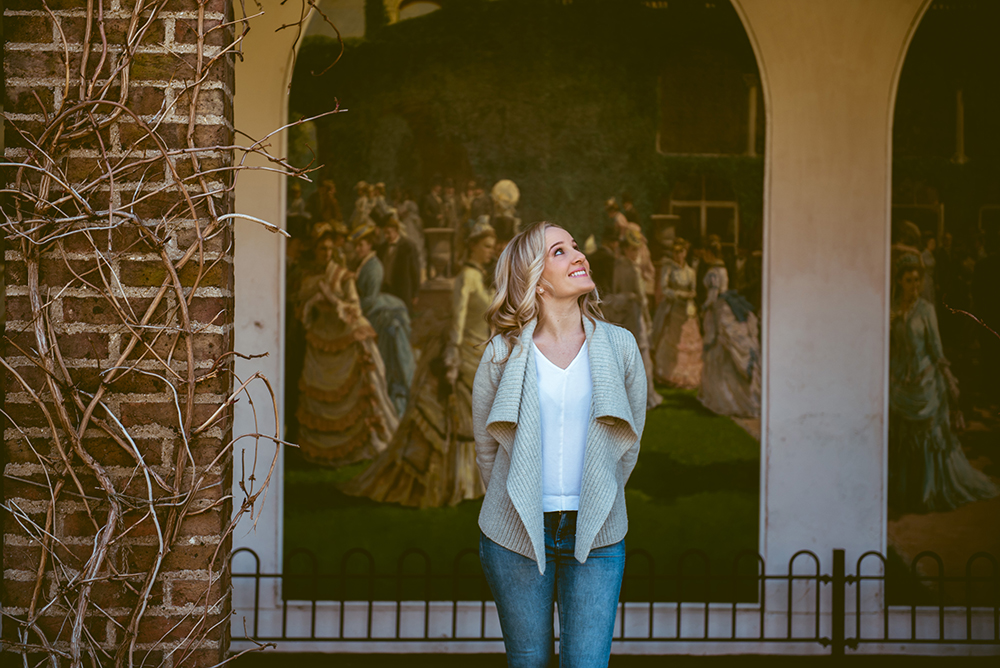 PicTrip is a new company based in the UK that pairs travellers with local photographers in cities all over the world. They’re a growing company but current destinations include places like London, Paris, Nice, Rome, New York, Toronto, Dubai, Sydney and Melbourne. Last week I tested out PicTrip in my home city of London, which is where I’ve been living for the past 8 months. I’ve had headshots taken before but I’d been longing for some relaxed-looking, professional shots showcasing my surroundings as well as myself.

The concept is simple. You submit an inquiry online and where possible they will chat with you on the phone to gauge exactly what you’d like. They then organise the photographer and the shoot, so all you have to do is show up on the day, in the right place. Simple! 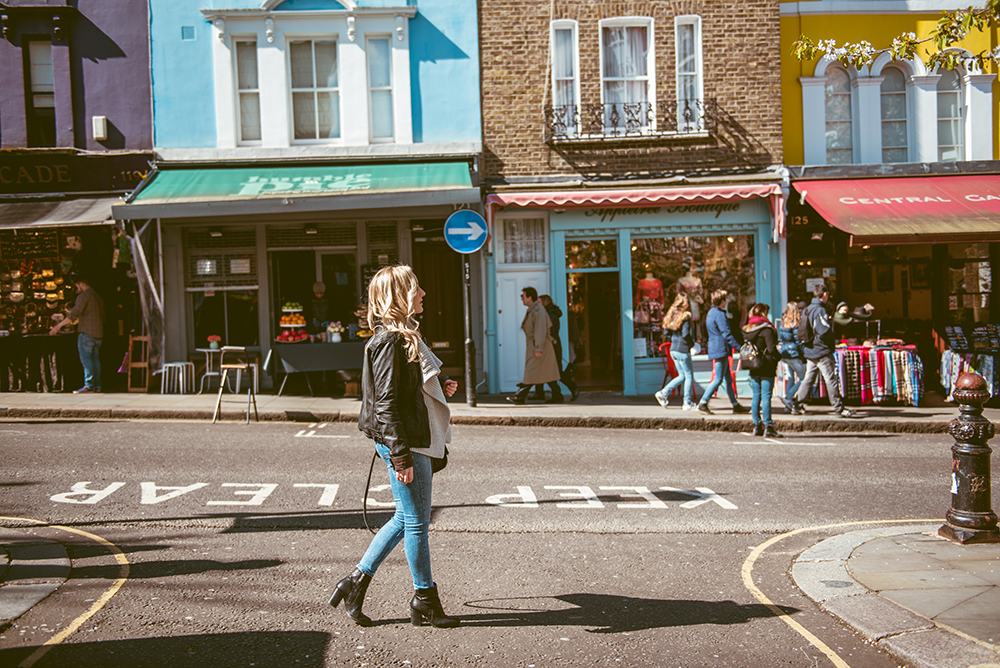 Prior to the trip we had a quick telephone conversation to establish where I would like the shoot to take place. If you have some particular landmarks in mind, such as Big Ben or the Eiffel Tower, then you could choose those, or you could go for something a little more off-the-beaten-path, like I did. If you really have no idea what you’d like, then the guys at PicTrip have some common photo walks and routes they know of, so you could leave it up to them to choose.

Since I live in London, I told them I wanted my photos taken somewhere colourful and picturesque. I love my city and there are so many pretty streets and secret places that I didn’t want anything too touristy. They suggested Holland Park, so in the end we came up with a walk that would take in vibrant Notting Hill as well as the park. I received a confirmation email with a photo of my photographer, her telephone contact information, full details of the walk and a map of our meeting point for the start of the shoot.

We scheduled the photo shoot for a Tuesday but as it’s London, we kept an eye on the weather. Soon it became apparent that the changeable London weather was threatening to dampen the shoot and with rain forecast for the Tuesday, they contacted me to re-arrange to a Thursday. I appreciated the flexibility, so we could get the best weather for the day.

Our walk around Notting Hill

On the day of the shoot London was alive in glorious sunshine. I decided to get my hair blow dried so I booked a quick appointment at Dry By in Fitzrovia. This was only my second time ever having my hair professionally blow dried but it was so worth it. With several looks to choose from I had trouble deciding but in the end my Italian stylist Francesco recommended ‘The London’ but with a little hint of ‘The Rio’. In 45 minutes my messy bedhead locks were transformed into beautiful, sleek waves. 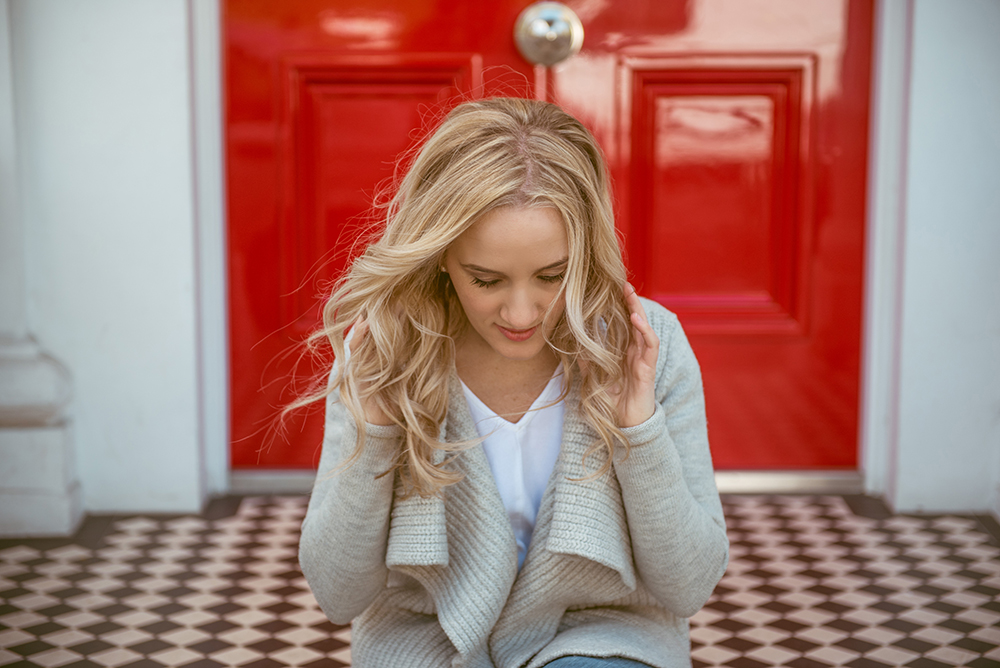 With my hair now looking bouncy and full of life it was time to head off for my photo shoot, which was booked for 10am to avoid the crowds. I met my photographer Laura in a stunning mews in Notting Hill, called St Lukes, which makes a regular appearance on Instagram feeds. London is full of these little quiet mews, which are basically rows of houses built on a pedestrian alleyway.  St Lukes Mews boasts one of the prettiest houses in London – a pink house covered in foliage with a matching pink bicycle outside. 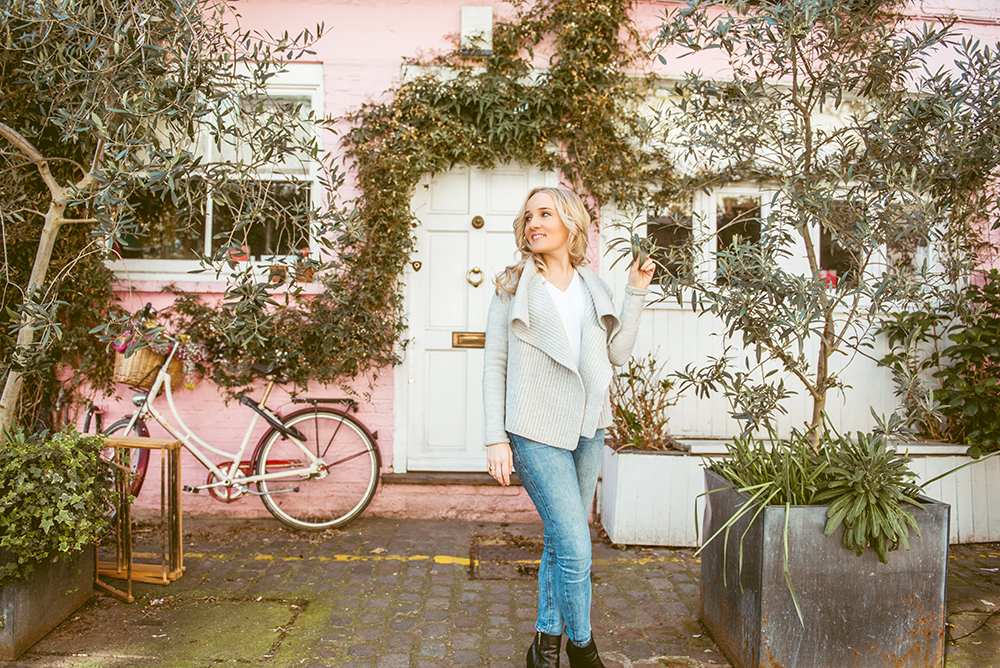 After a quick chat to introduce ourselves, we quickly got down to the photo shoot. As I’m no fashion blogger and this was my first ever shoot, I had no idea what to do with myself, but Laura gave me some useful directions. For instance she would ask me to walk down the street looking up at the houses, left and right, or she would ask me to stop and inspect a flower. 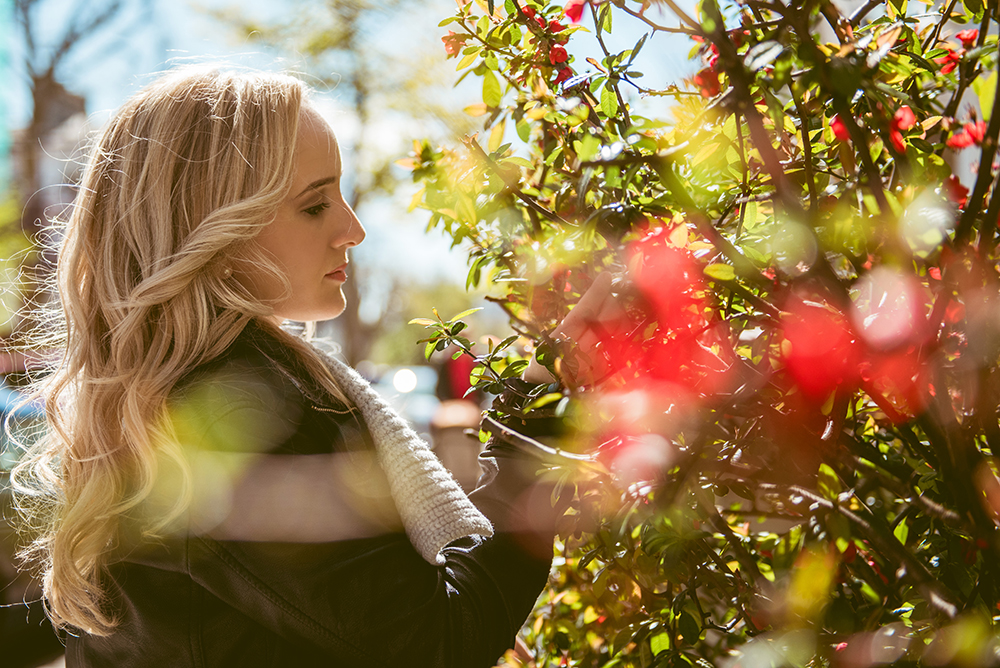 Instantly I felt at ease and comfortable, even though I was having my photo taken in the street. From the mews we walked towards Portobello Road, stopping to take pictures in front of more colourful houses. I soon forgot that people could see me, since we were having so much fun chatting and looking at the surroundings. We strolled along Portobello Road market, where I stopped to look at some stalls while Laura snapped away on her camera. With so many antiques and trinkets for sale on the market stalls, it made for some great pictures. 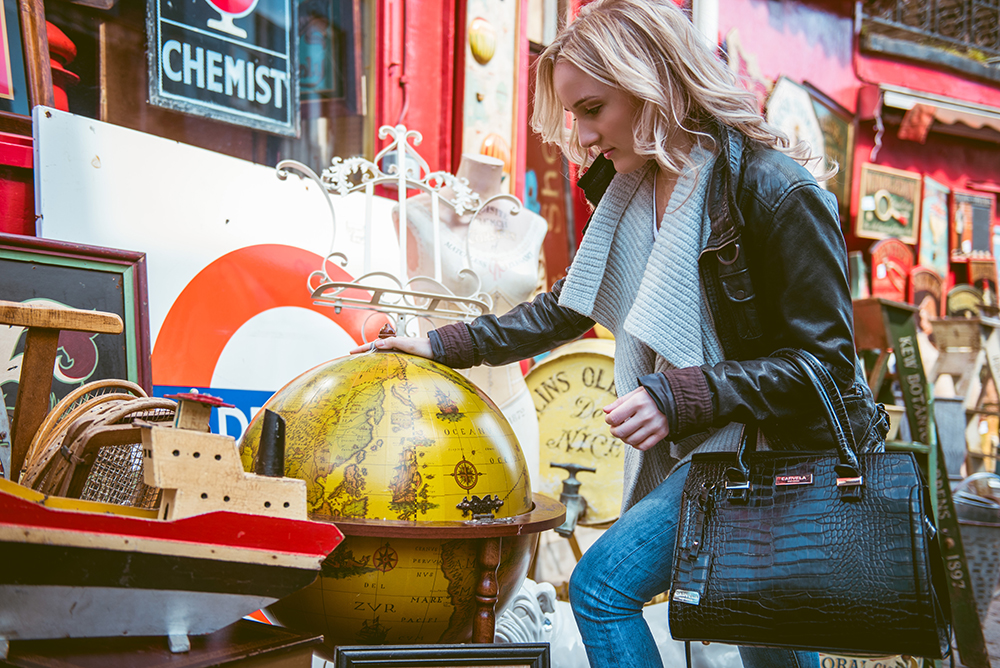 One of my favourite photos is this one, where Laura asked me to lean up against a bush. I got so many bits of flower stuck in my hair but she was right, it was totally worth it for that one perfect shot! 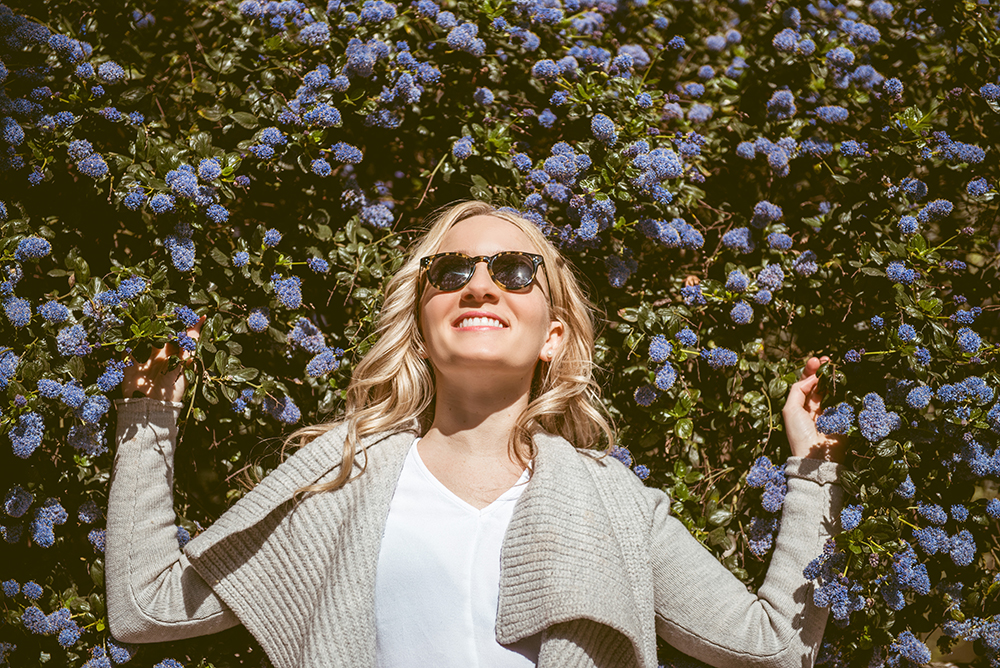 We finished up our walk in Holland Park, which features a Japanese ornamental garden. Spring was such a beautiful time of year to have my photo taken as all the tulips and blossom trees were out in full bloom.

The two hours went by really quickly. We walked, we talked and by the end of the shoot, I felt like I’d made a new friend. We talked about Laura’s photography, my blogging and about her upcoming trip to California. It was a lovely morning and I left feeling very excited to see how the photos would turn out. 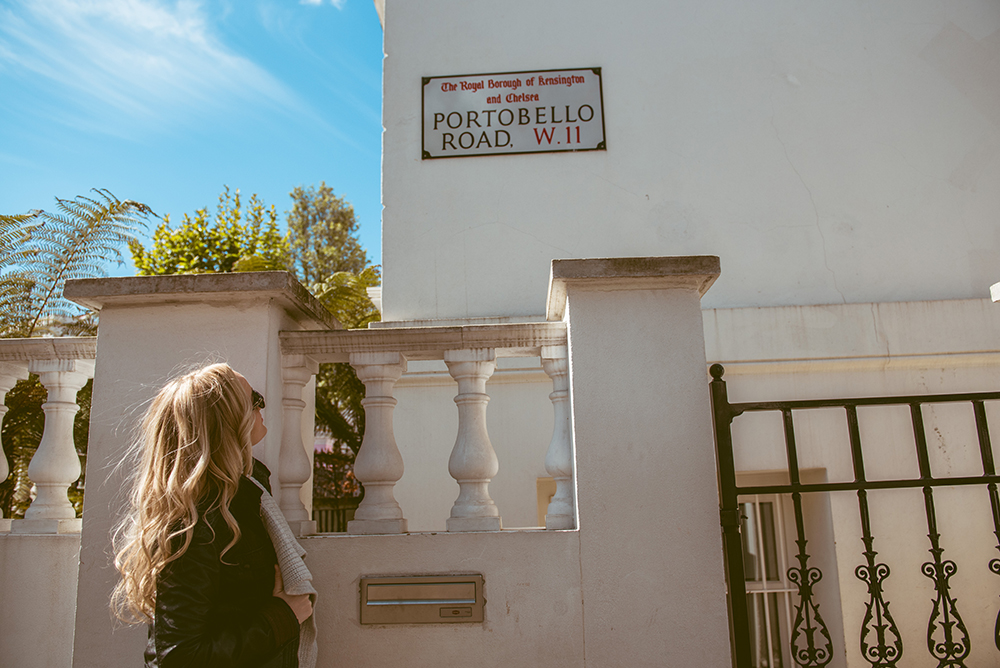 And they turned out better than I could ever have imagined. When I received the link to my online gallery 4 days later, there wasn’t one image I didn’t like. They were beautiful, like something out of a magazine! I love the way Laura played with light and flowers to get a range of pictures that really showed off the beauty of London.

The online gallery is very well designed too, allowing you to share it to Facebook or Twitter, or copy the link to email to friends. It was easy to download each photo individually, or export the whole gallery to my computer as a zip file. Photos are password protected so you’re provided with a login to access them.

Packages start at £220 for the FlyBy package and range up to £480 for the City Trekker package. I realise for some travellers this would seem like a large sum of money to spend on some holiday photos, so it’s likely this would be a special treat. But for a professional shoot, this is quite competitive with other London photographer rates. While this can be quite a large additional expense to your holiday it’s really great if you’re looking for some professional shots that aren’t taken in front of a blank screen. PicTrip is particularly great if you have a special occasion to celebrate, such as an engagement, anniversary, valentine’s trip etc, you and your loved one can even use intention bracelets to commemorate the occasion and make the photos even more romantic. It’s also the perfect treat if you just want to have some pretty pictures. I had a really enjoyable day and as you can see from the results, the photos are of great quality and properly edited. I’d love to use PicTrip again for more cities in different destinations!

Disclosure: PicTrip provided me with this service complimentary so I could test it out and share it with you. It’s important that I’m honest and I wouldn’t write such a glowing review if I didn’t really love the product.