01 May Living on the Edge: Hiking to Pulpit Rock in Norway

Pulpit Rock, the Preacher’s Pulpit, Preikestolen- whatever you want to call it- is mind-blowing. Travel writers often talk about scenery taking their breath away, but seriously, Preikestolen tops anything I’ve ever seen. Don’t believe me? Check out these 15 mind-blowing images. 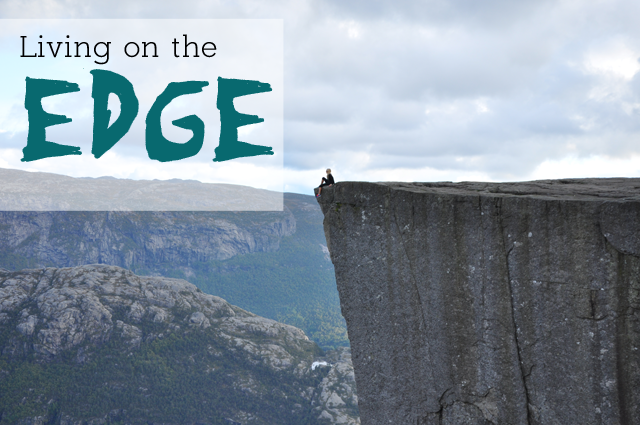 Acrophobia is its name, and for anyone who fears the edge, Preikestolen is a test of this fear. This massive granite cliff towers 604 metres over the Lysefjord in Norway, making you feel like you could almost reach to the heavens, or tumble down to the depths below.

I had seen its awesomeness through photos scattered about on the web, but wasn’t quite sure whether I would make it there on my trip to Norway. For a start I wasn’t quite sure how to get there, plus it was the end of September and I wasn’t sure if it was still even possible to do the hike. Plus it’s just not the same doing a hike like that on your own.

But when I arrived at my hostel in Bergen I soon got chatting to a couple of English lads and one of them- George- told me he was off to Stavanger to do the famous hike to Pulpit Rock. After chatting about it a bit more, I decided I had nothing to lose and would meet him there to join in this little expedition. That’s the brilliant thing about not making too many plans- you can change your mind at the last minute when you make new friends.

I took the bus from Bergen to Stavanger and a ferry over to Tau- you can read all about it in my article on getting to Preikestolen.

Where to stay at Preikestolen

There are basically two accommodation options- if you’re broke because of Norway’s expensive prices, go for the Preikestolen hostel (10% discount too if you’re a member of Hostelling International). If you have the money to spare, opt for the Preikestolen Mountain Lodge. You actually check in to the hostel at the mountain lodge but you stay in a separate little farmhouse building just a stone’s throw down the hill. The mountain lodge is open all year round, but the hostel is only open for part of the year from April to around the end of September/October. 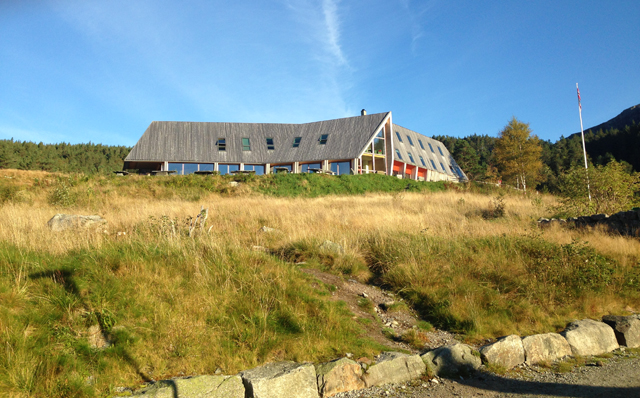 The setting is absolutely beautiful- it’s surrounded by mountains and forests, with a view of Lake Refsvatnet. Waking up to that view was definitely not a bad way to start the day! 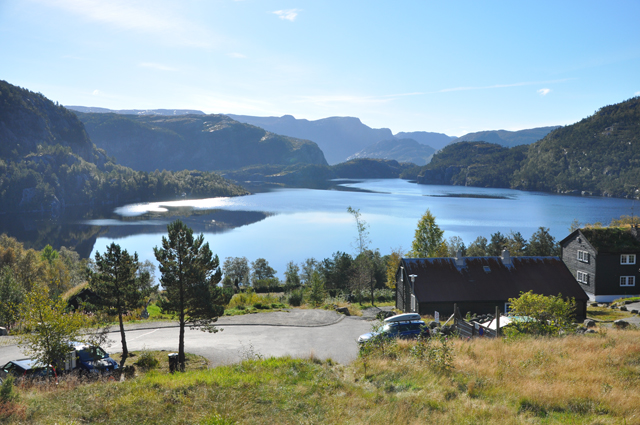 Designed by Stavanger-based company Helen&Hard, the mountain lodge is quite futuristic looking and features a restaurant, reception, conference room, a lounge and 27 rooms with private bathrooms. The restaurant is outstanding and serves a complimentary Norwegian breakfast every morning to provide both hostel and hotel guests with enough fuel to hike to Preikestolen. In the evening I also tried out their 3-course set menu as a treat after the long hike- totally worth it! 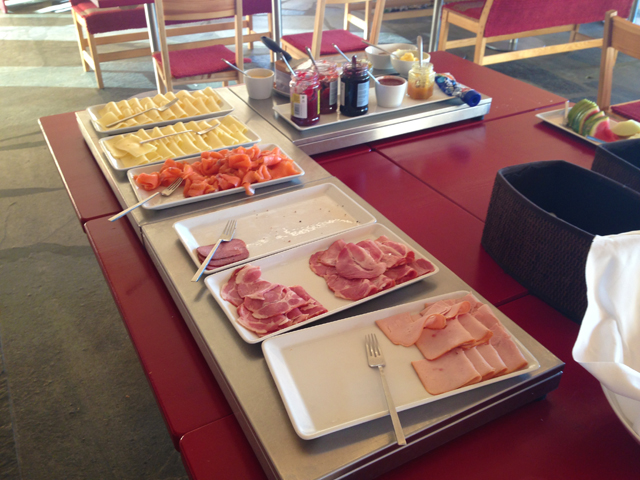 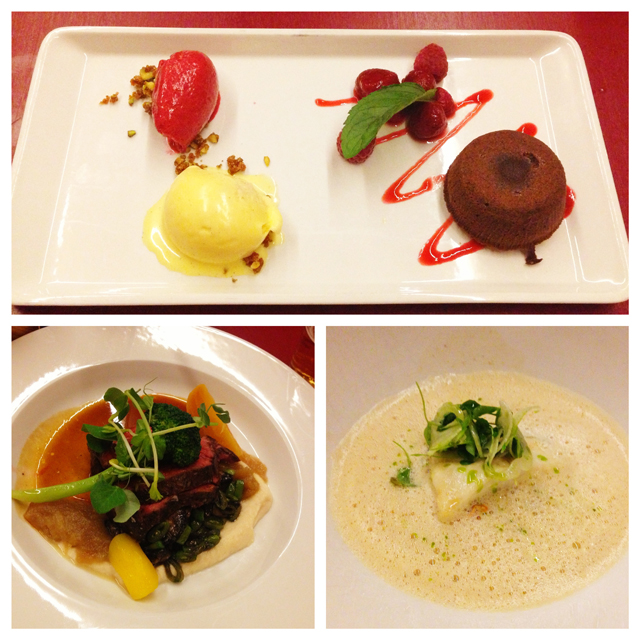 At the breakfast buffet the boys from the hostel told me I simply must try the ‘brown cheese’ aka Brunost. I didn’t quite believe them about this brown cheese at first, but it does actually exist and it’s probably one of the weirdest foods I’ve ever tried. Brunost is basically a caramelised whey cheese with a sweet taste and a texture a bit like plasticine. In a word, it’s weird. 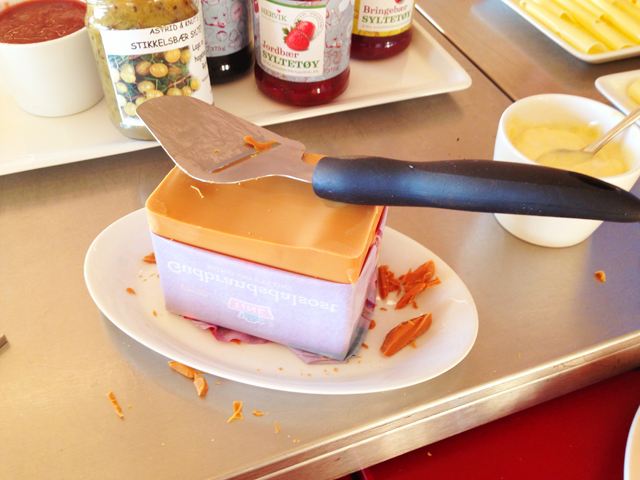 I stayed in the Youth Hostel in a dormitory since it was cheap for one night and I wanted to meet some new people. It didn’t feel like a hostel though, more like a house with a lovely kitchen and a room with a few bunk beds. There’s an indoor toilet, but you have to go outside to a different building for the showers. Since it can get pretty cold in Norway I was pleased to discover the hostel was nice and toasty with central heating. There was a mixture of nationalities staying there- Australian, Kiwi, English, French etc- and everyone hung out in the kitchen for a chat. 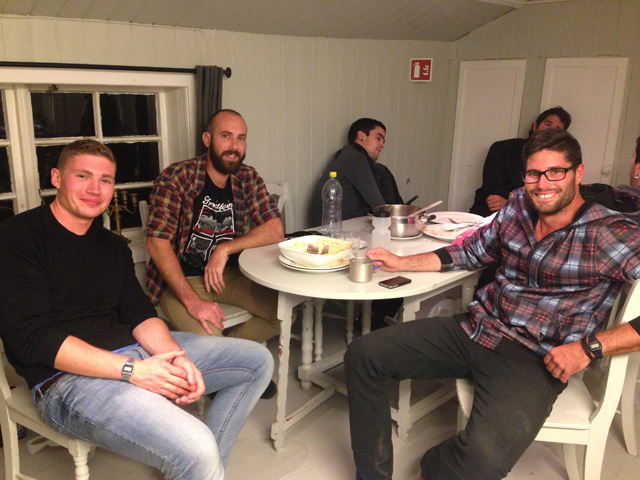 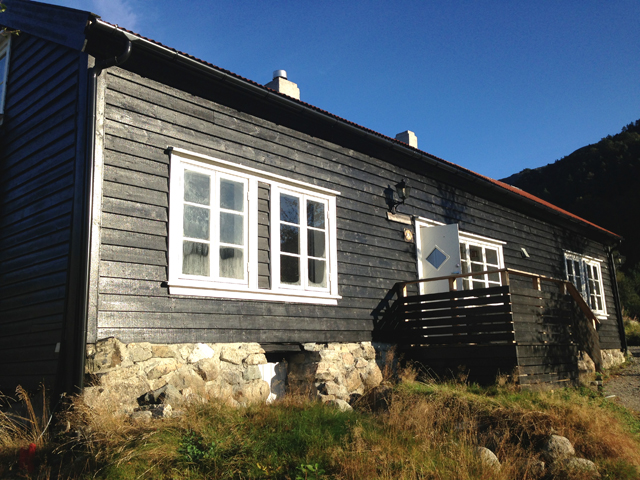 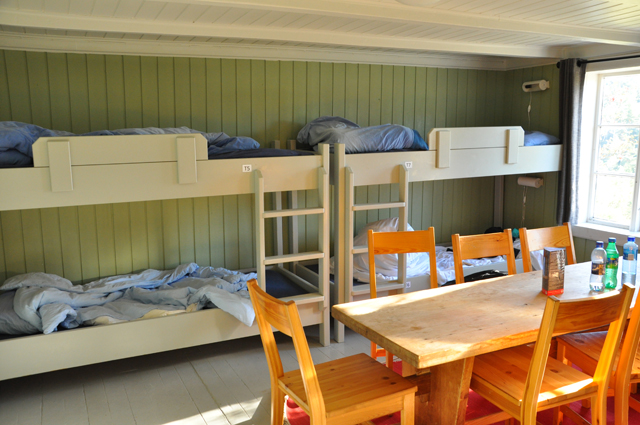 What to wear for hiking Preikestolen

Websites will tell you to wear hiking boots and all that sort of gear, but I’ve never been the ‘prepared for the outdoors’ sort of type. I wore a pair of Nike trainers, my leggings I wear for the gym, a T-shirt, a sweater and a bodywarmer. That’s all you really need- so don’t worry if you’re not carrying a load of hi-tech gear. On the way up we passed a group with hiking poles and all that kind of equipment, but we overtook them, so that says a lot really. On the other end of the scale I actually saw someone trying to do it in ballet flats- possible, but not really recommended. 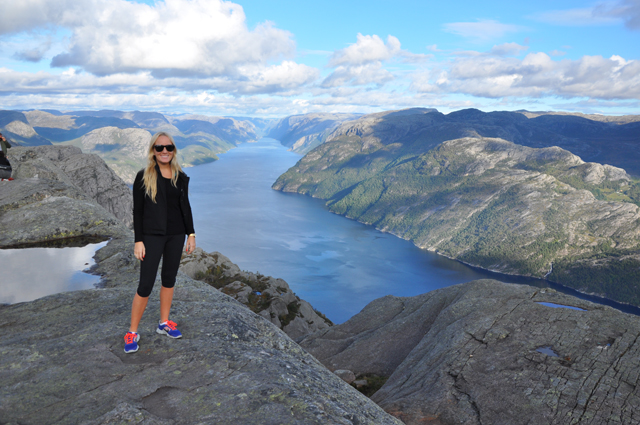 How long is the hike to Pulpit Rock?

Obviously since it’s so ridiculously awesome that doesn’t include the amount of time you spend up on the rock. If you eat lunch up there and take a gazillion photos, you can be up there for hours just gazing out at the view. 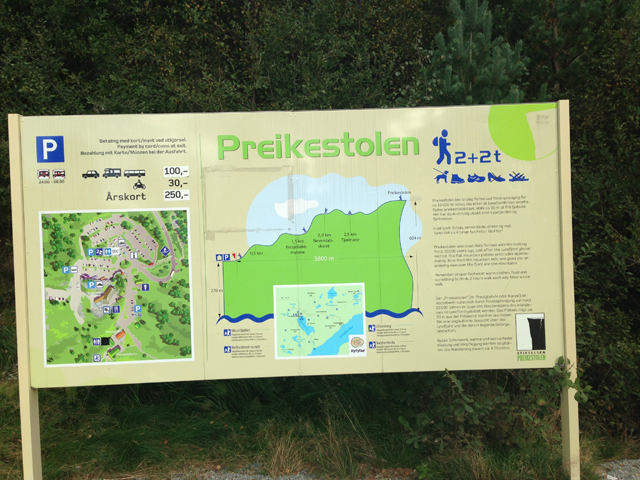 I didn’t find the hike too difficult and and afternoon in the great outdoors certainly beats the monotony of going on the stairmaster at the gym! 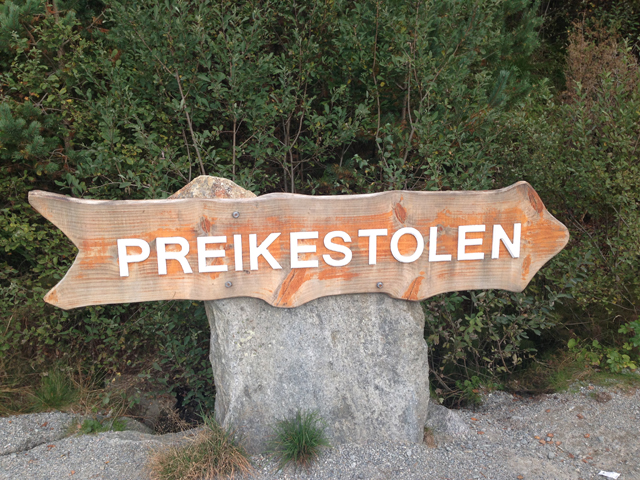 The route is well signposted with lots of red painted markers, follow these and you should be fine. 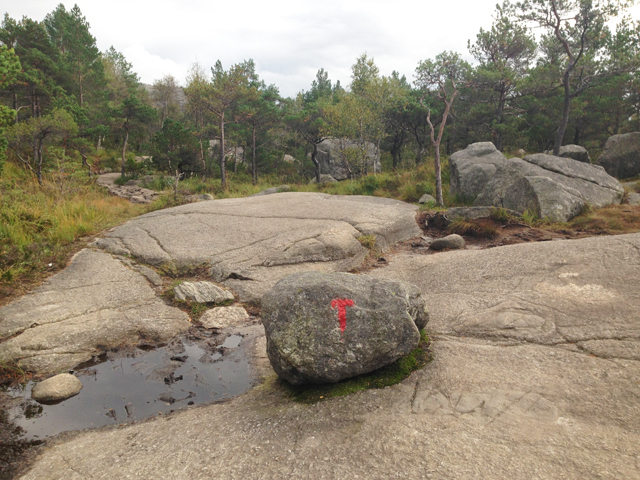 Obviously you’re climbing up hill to get to the top of Preikestolen, so it’s quite challenging but I saw a huge mixture of people on the hiking route, both young and old. The hike has some steep inclines where you’ll be climbing up over rocky boulders- this is when you really feel the thigh burn and will be most out of breath. However this is also broken up with boardwalks, gravel pathways and natural terrain. Around the halfway point it settles down a bit and you’ll be walking over much flatter parts, with incredible views and a small lake which looks incredibly inviting. 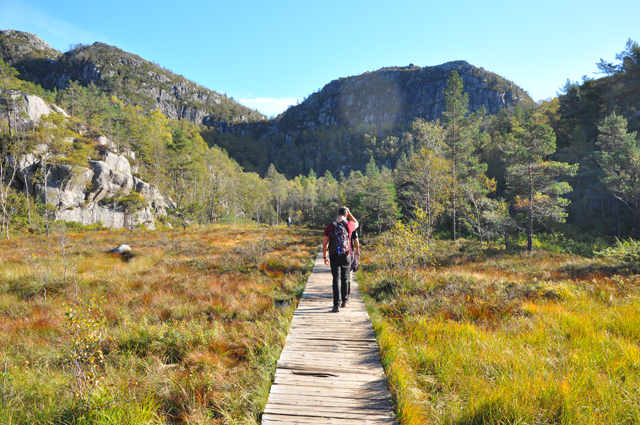 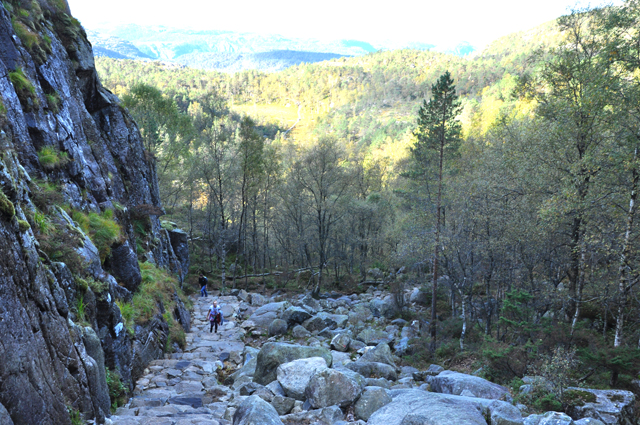 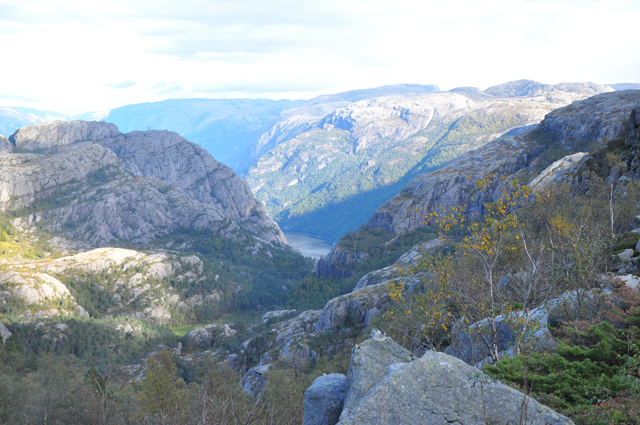 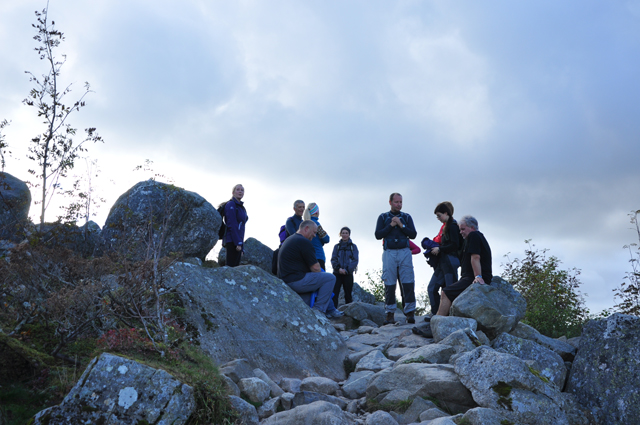 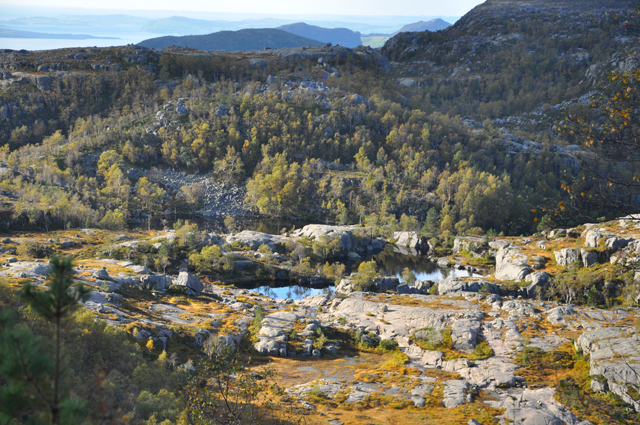 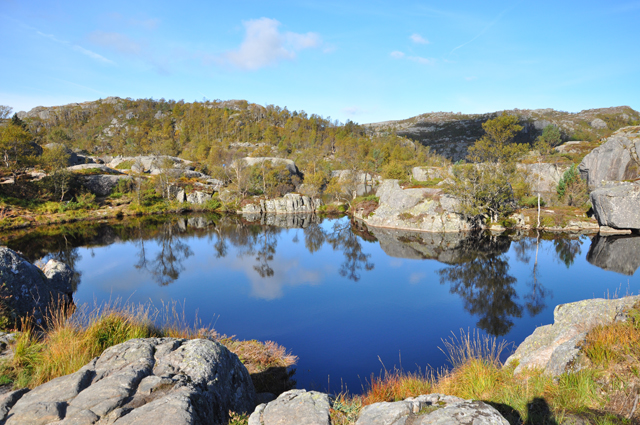 After all that there’s one last push to get to the top of Pulpit Rock!

The top of Pulpit Rock

When you get to the top you are rewarded with phenomenal views over the fjords. I think the photographs speak for themselves! 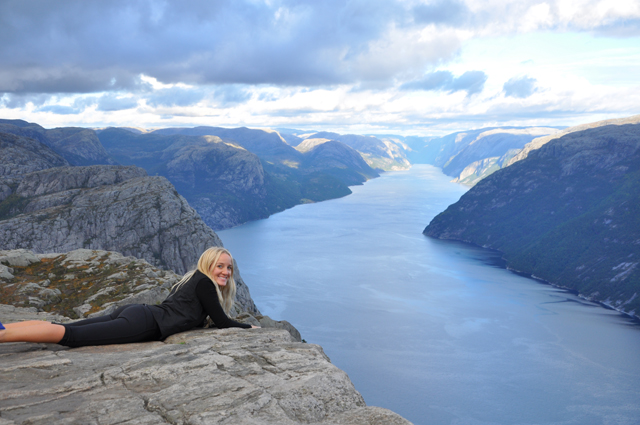 The rock itself looks like it has been hand-carved by the gods. It has a 25 metre by 25 metre flat surface, providing the perfect rest stop for lots of weary hikers. Of course you could spend all day here just getting creative with photography, but with lots of tourists around you have to take it in turns to pose for photos on the edge. 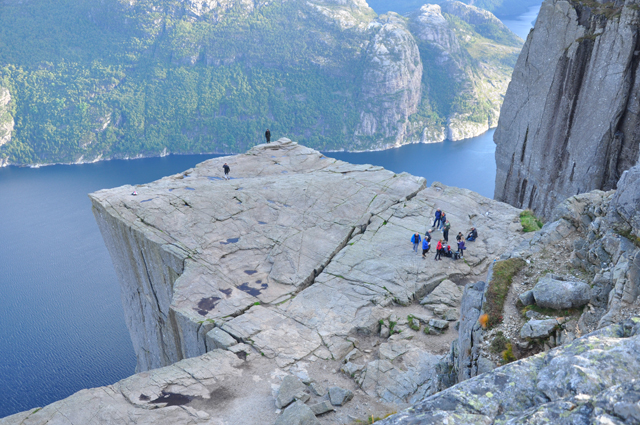 Despite my fear of edges, I couldn’t leave without getting photographs. At this point I was glad to have George with me to hold the camera and take photos from different angles. Even with the best camera and tripod, you couldn’t really do it on your own. The weather was a bit cloudy, which was a shame for the photographs, but it didn’t detract from the view or the experience. 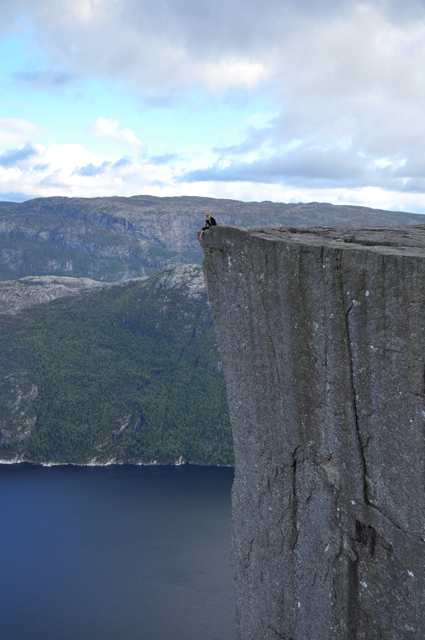 I shuffled to the edge of the cliff face and dangled my legs over the side, being careful not to look down. I stood up, looking out over the fjords. But I didn’t have the guts to jump up and down near the edge like some people do. The cliff has a sheer drop and must be respected- there are no barriers here to save you. There have been incidences where people have fallen off Preikestolen and some have hiked all the way up here just to commit suicide by jumping off the edge. 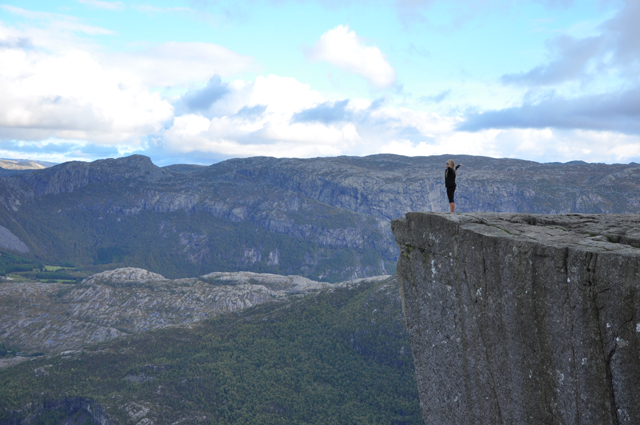 I was reminded of this when just before sunset, a mountain rescue helicopter flew right up to the cliff and a man on a speakerphone told everyone to get back from the edge. At the end of every day, the helicopter does a sweep of the area to make sure there have been no casualties that day- scary I know! At this time you have to do as they say and begin the hike back to base camp. 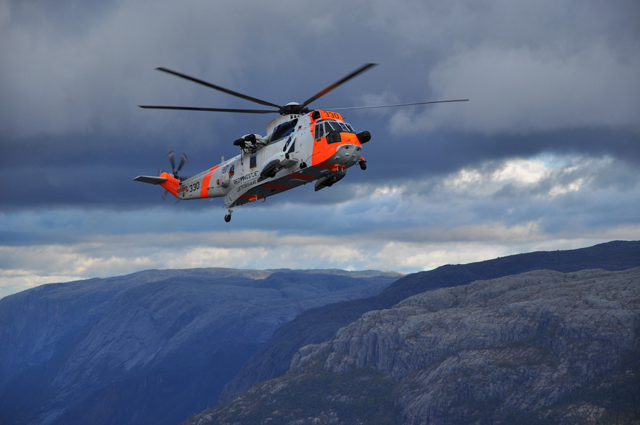 By this time I’d caught the bug for the great outdoors. I was so in awe of Preikestolen, I hiked it the next day too because the weather was so gorgeous. The perfectionist in me wanted the best possible photographs of Pulpit Rock in the sunshine. This was the result… 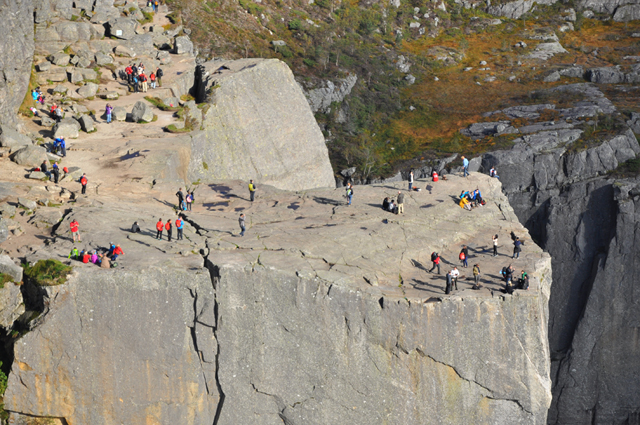 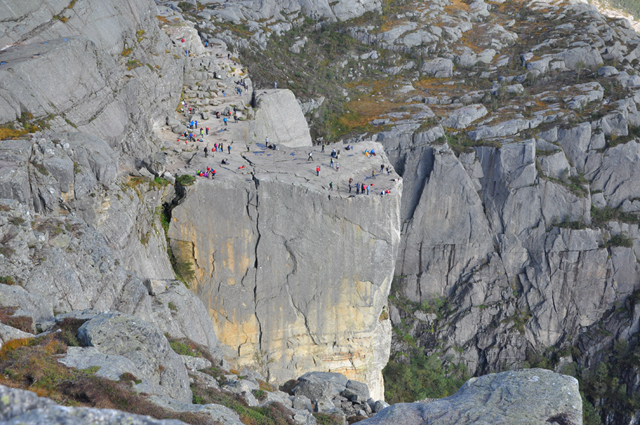 Some tips for hiking Preikestolen 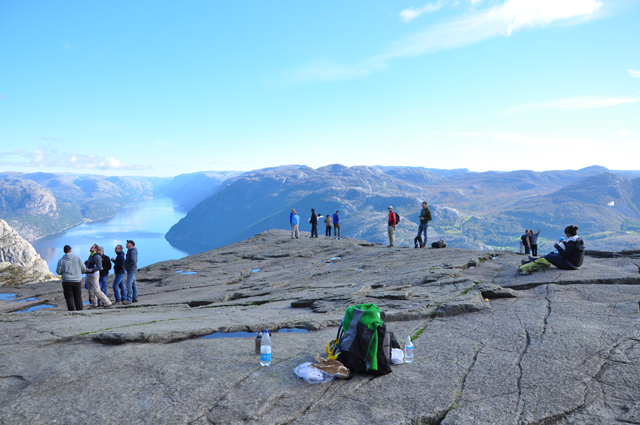 Hiking to Pulpit Rock is one of the best things I’ve ever done and this is something you cannot miss when visiting Norway!