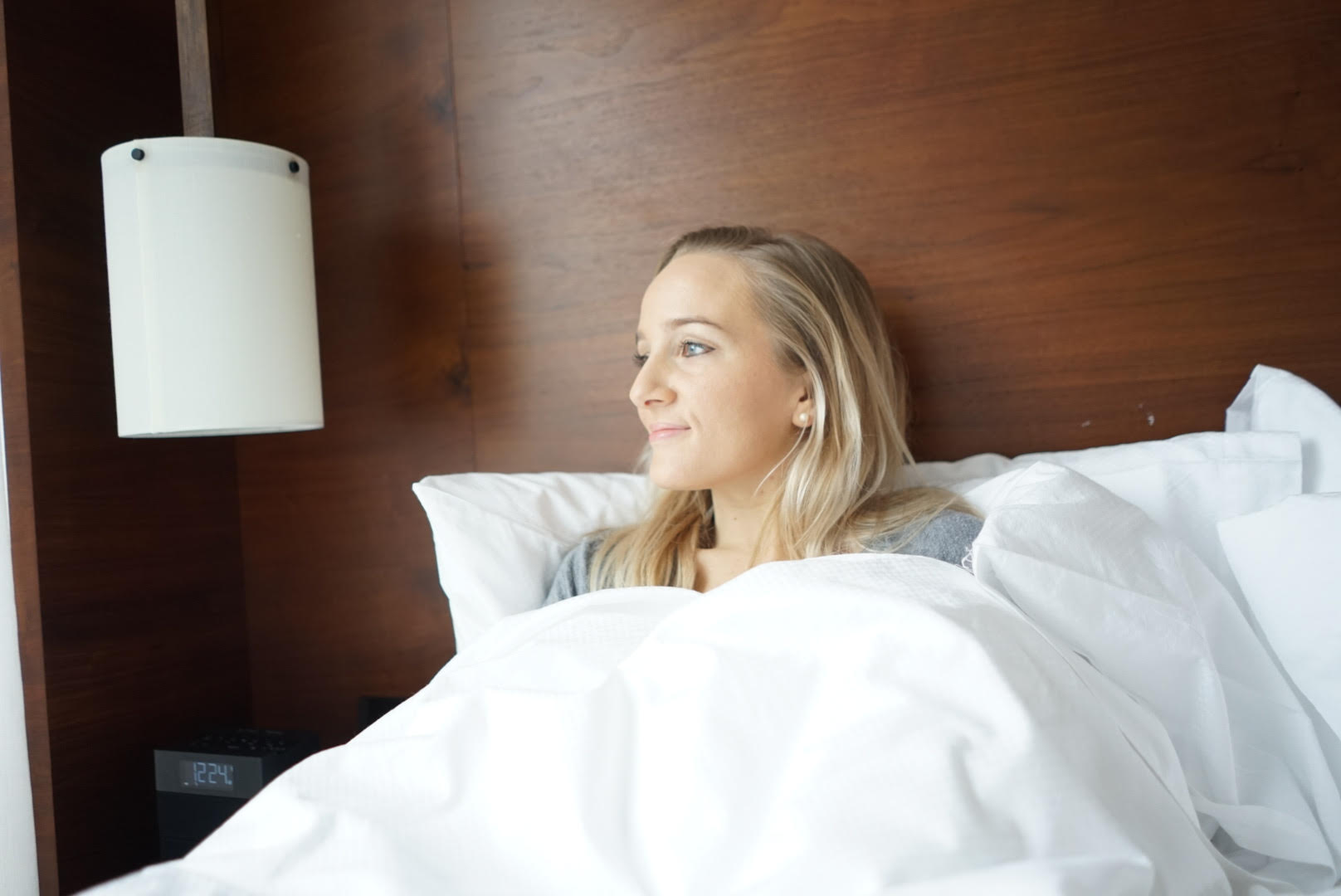 Posted at 14:35h in Blog, REVIEWS by Victoria 0 Comments
Share

It’s a well known fact that hotel rooms in New York are often small and poky. I’ve stayed in a few boutique hotels in New York City because I prefer something a little more unique than the standard chains, but a lot of them can feel quite dark with very little in the way of sunlight. Not the Arlo Nomad.

This modern hotel opened its doors back in 2016 and occupies a prime location in Midtown, with incredible views of the Empire State Building and the whole of Manhattan. The common areas are trendy and modern, while the rooms are light, airy and well-designed. Best of all you’re within walking distance from Penn Station if you’re coming from the airport, plus you’re close to all the major tourist attractions such as Grand Central, Top of the Rock and Times Square.

To me this really is the best place to stay in Midtown New York. Here’s why: 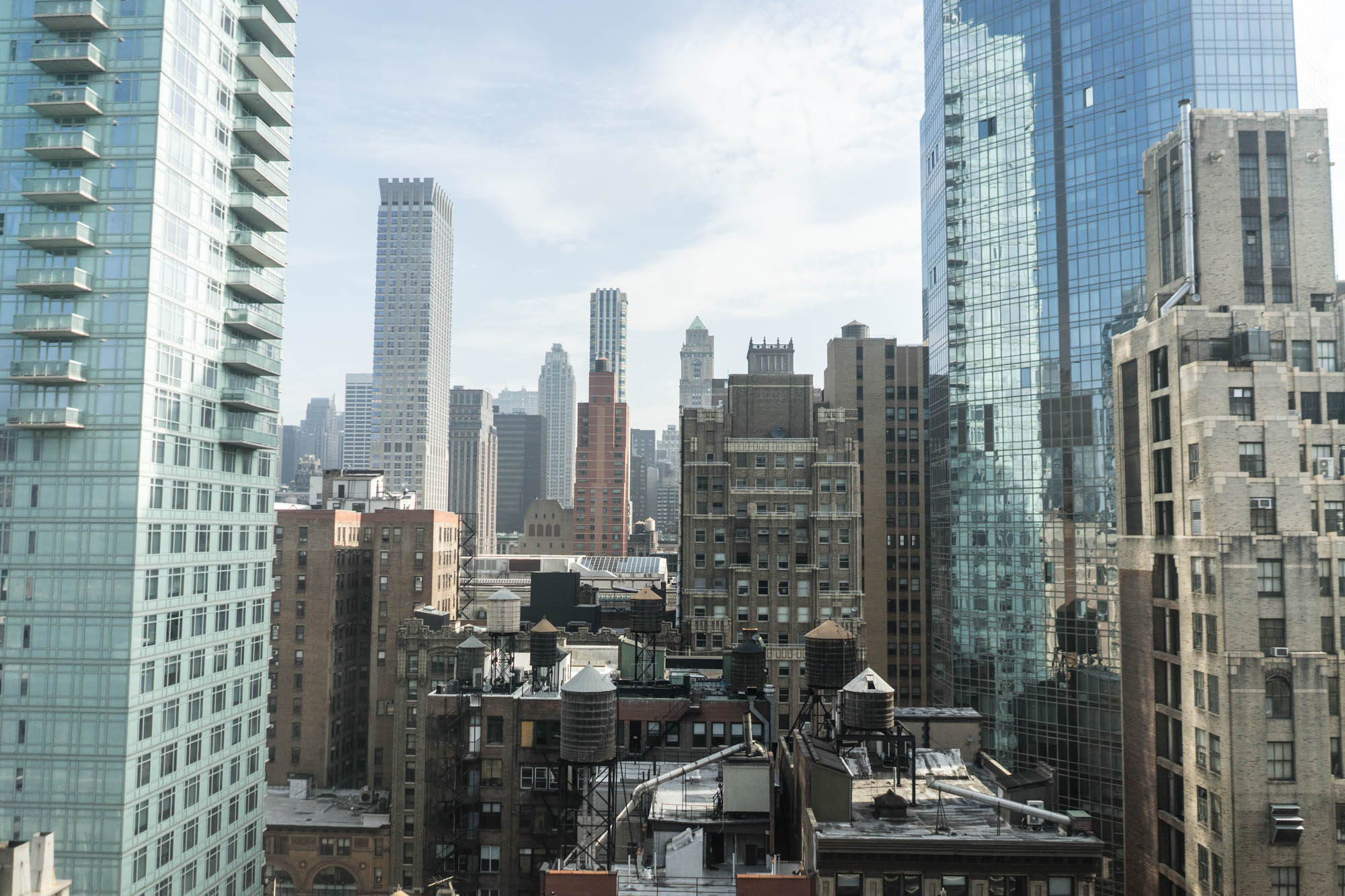 I booked my stay with roomsXXL because they offered the best price when I looked on Trivago and they offer low rates on hotels throughout the world. Check-in was super easy – I didn’t even have to show the receptionist a confirmation because everything was in the system. I just needed to provide my passport ID and credit card for incidentals. Everything else was prepaid and there were no hidden taxes to be charged, which can often be the case if you book with other websites.

I can’t speak more highly of the staff there. They really go out of their way to make you feel welcome, which is always important when you’re staying in a hotel. When I arrived I’d come on an overnight flight from Seattle, which meant I landed at 7am in the morning. By the time I got to the hotel it was 9am but this was still long before check-in time, which is 3pm.

The gentleman on reception told me “I have good news and bad news. Your room is almost ready but you’ll have to wait about 5 to 10 minutes while they finish up.”

“Oh that was the bad news” he said.

It certainly wasn’t bad news to me! I wasn’t expecting to be given a room this early in the morning so that was a welcome surprise. He even handed me a Fiji water while I waited in the lobby. 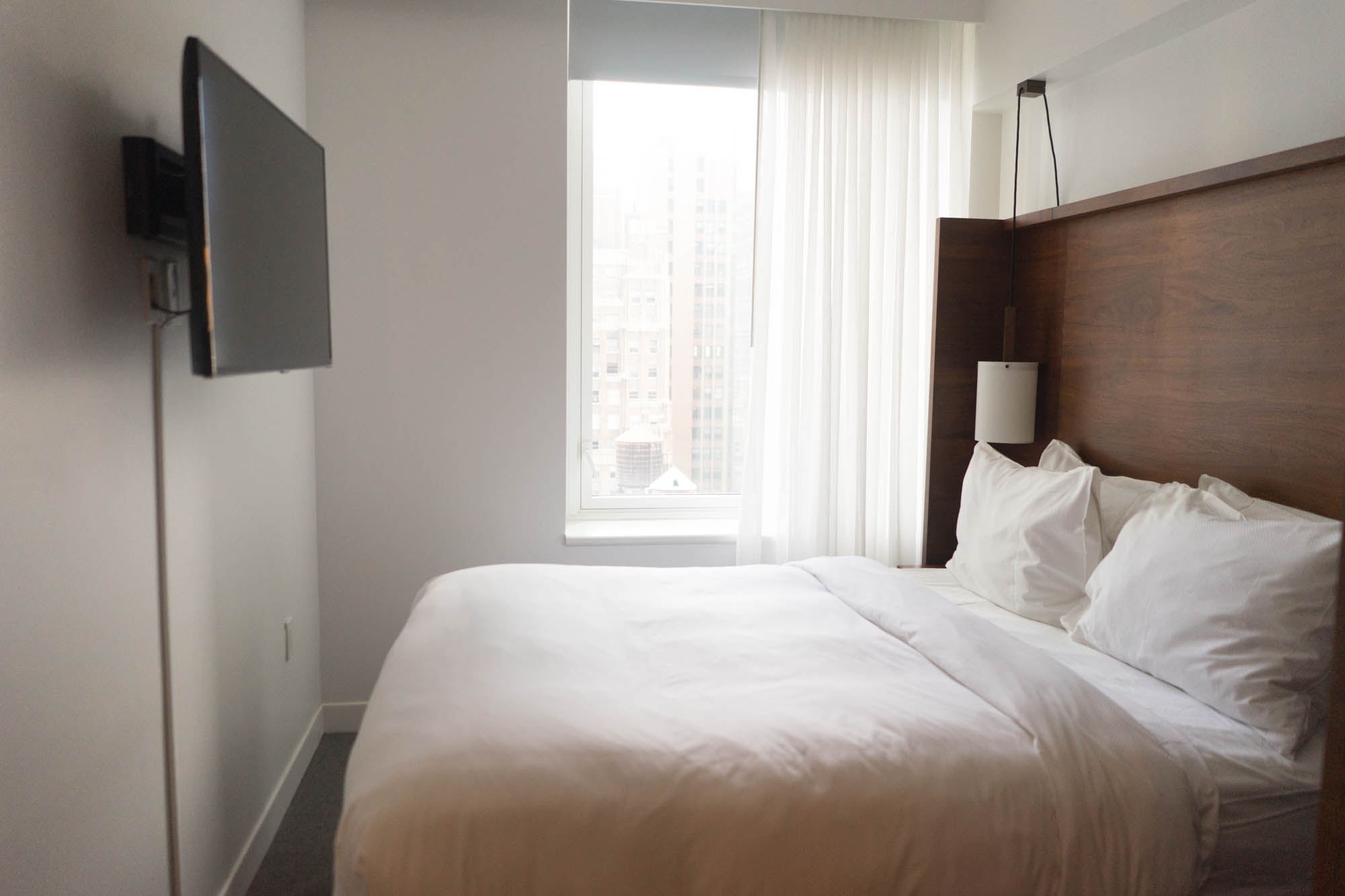 My room was one of the queen rooms on the 21st floor, so I had a view of the Empire State Building. The rooms are described on the hotel’s website as “thoughtfully designed micro rooms” – they’re compact (this is normal in New York) but they’re incredibly well-designed. 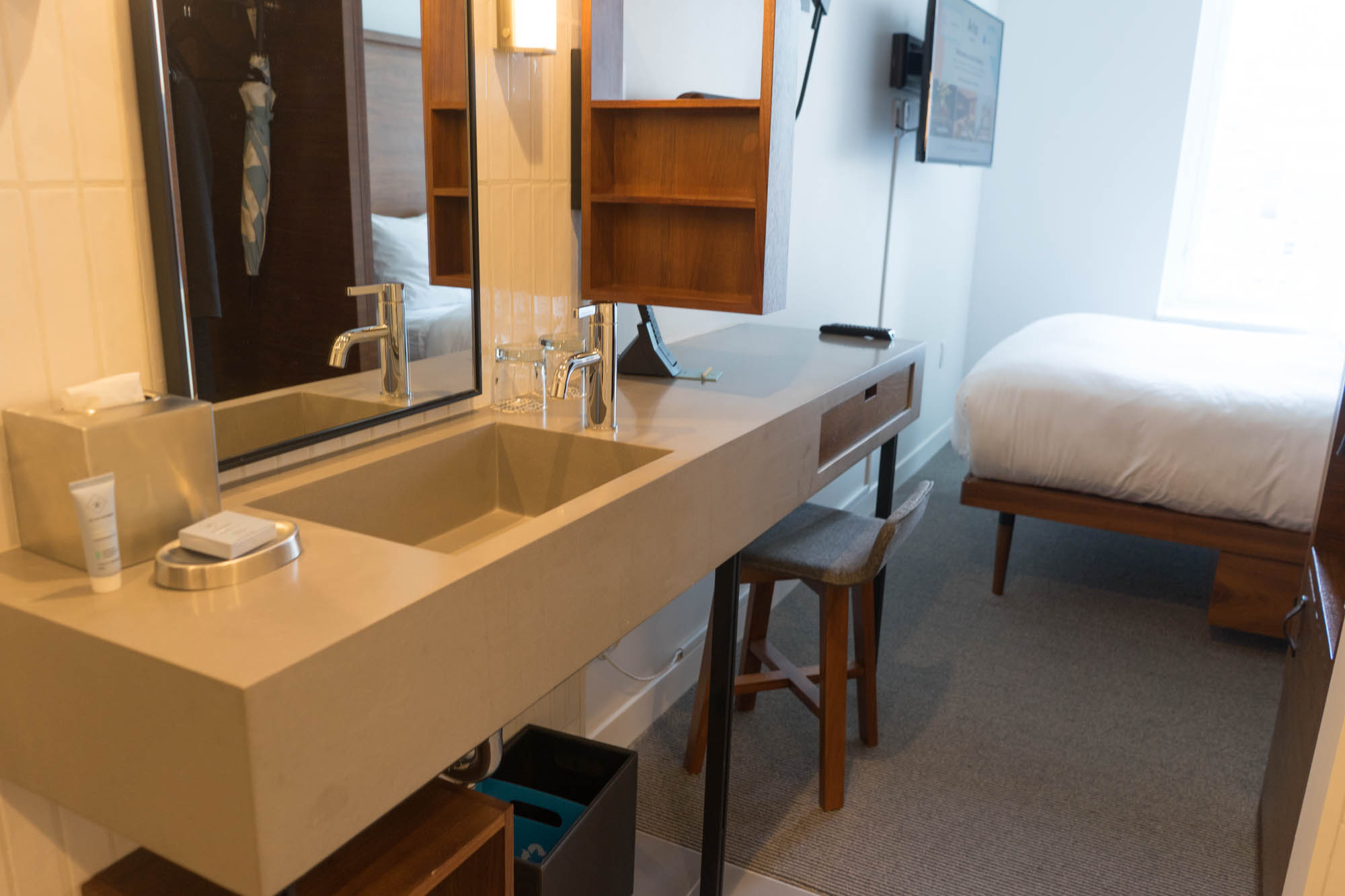 The space is utilised in such a way that you really don’t feel cramped at all – you have everything you need right there.

My bed had a super thick mattress and was one of the comfiest I’ve ever slept in. I also loved the little touches, such as the “Home” and “Here” clocks next to the bed. 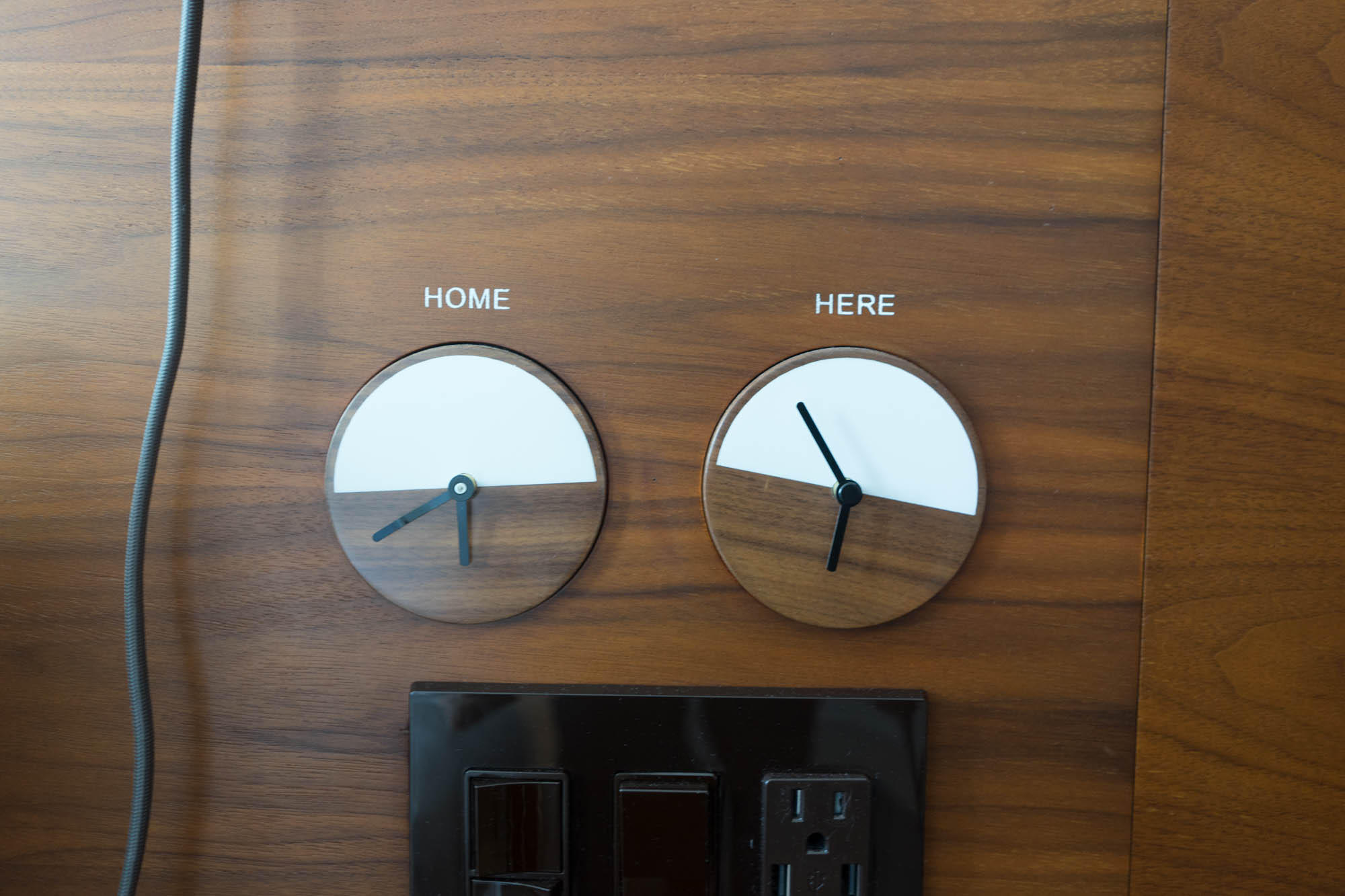 Features inside the room included: 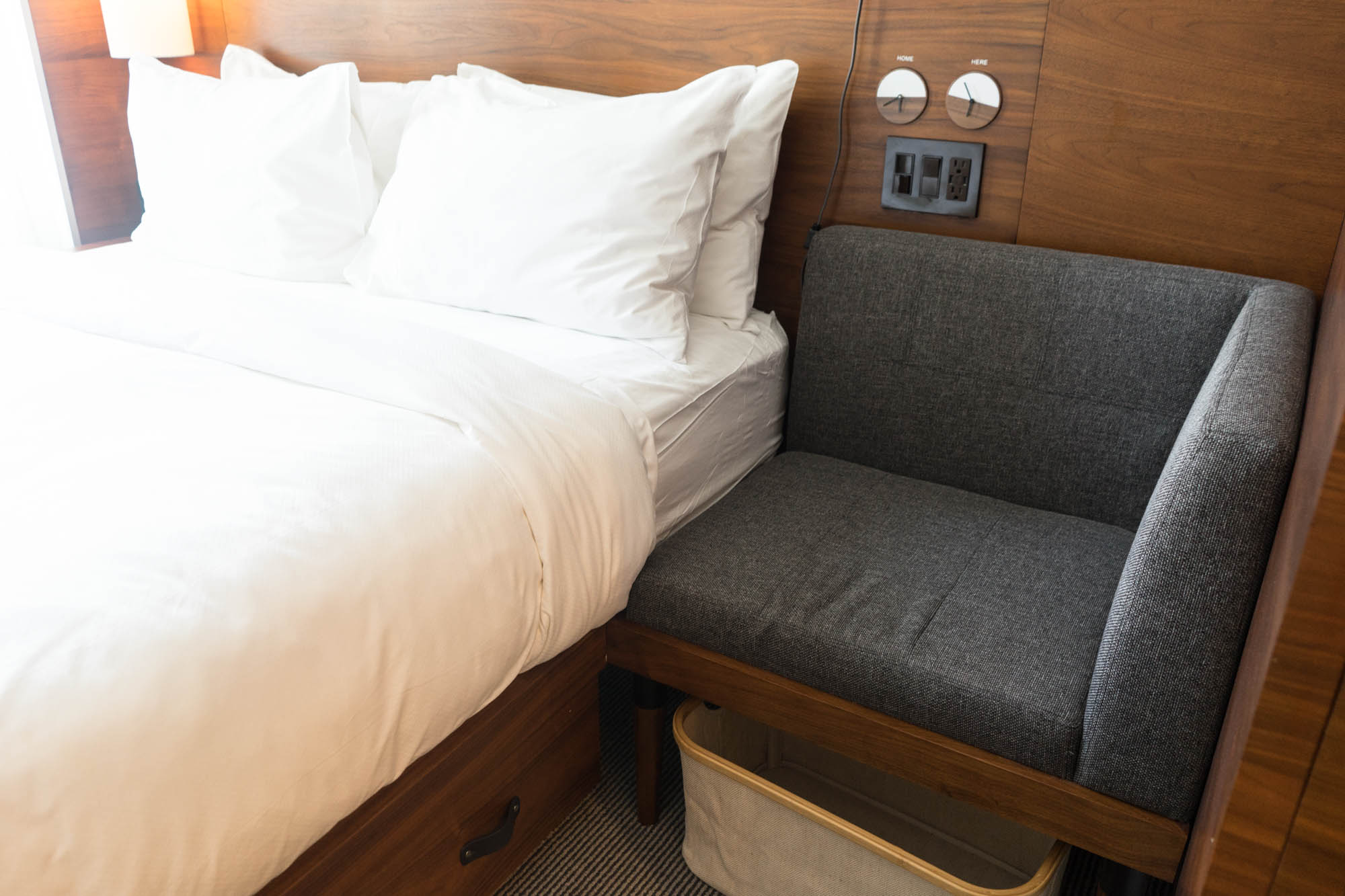 I loved the white bedding, the light colours and the walnut furnishings – it really reminded me of some of the Scandinavian hotels I’ve stayed in. Everything was super clean and it was so nice to shower under a rain shower after my flight! You can also tell a good hotel when there are giant bottles of shampoo and conditioner in the bathroom instead of those little mini ones that never have very much in them. 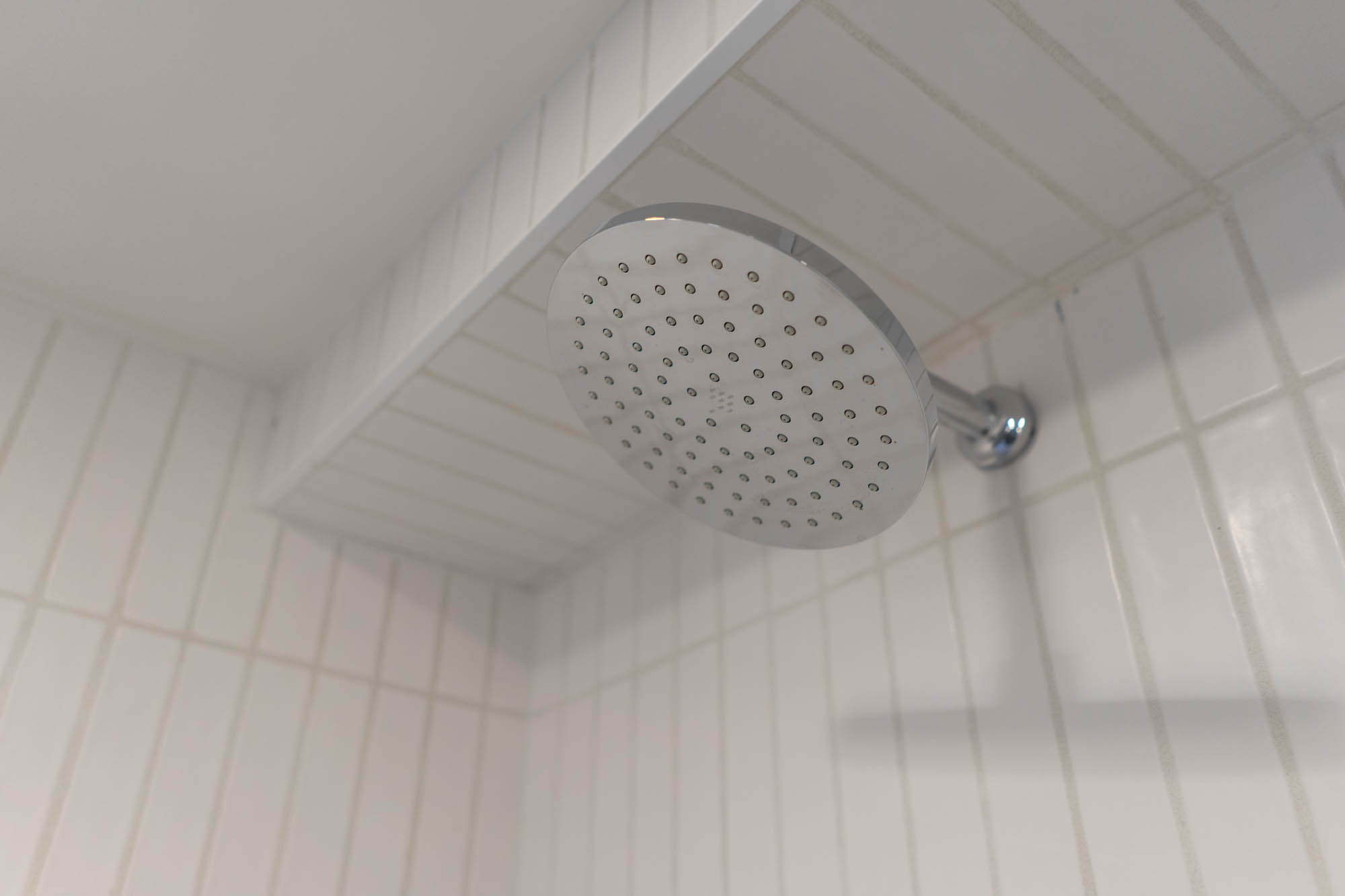 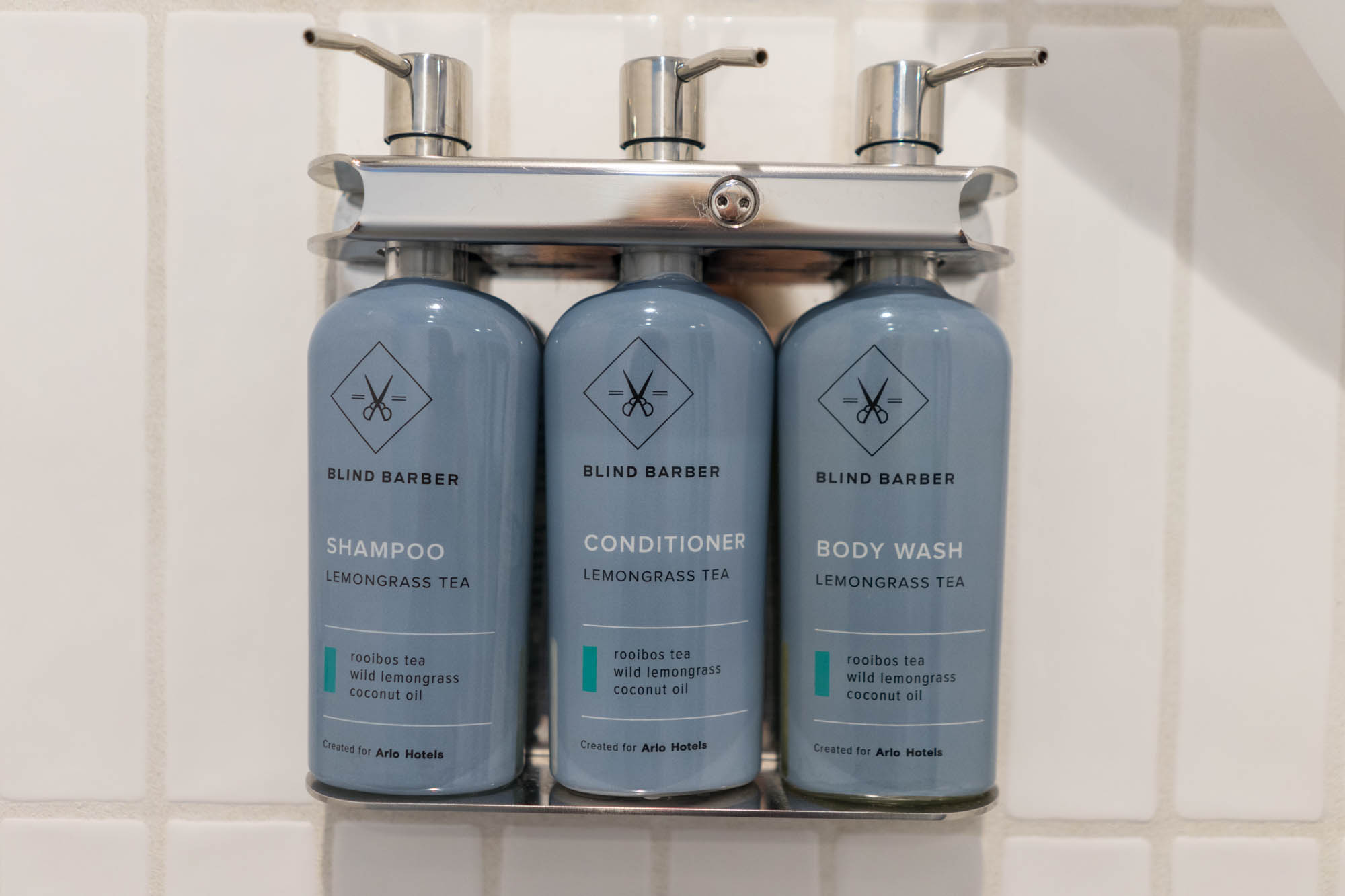 As a blogger it’s also great to have free Wi-Fi and an abundance of plug sockets so that I can get along with work. All in all it was a great room and somewhere I could happily stay for a week or two feeling completely at home. 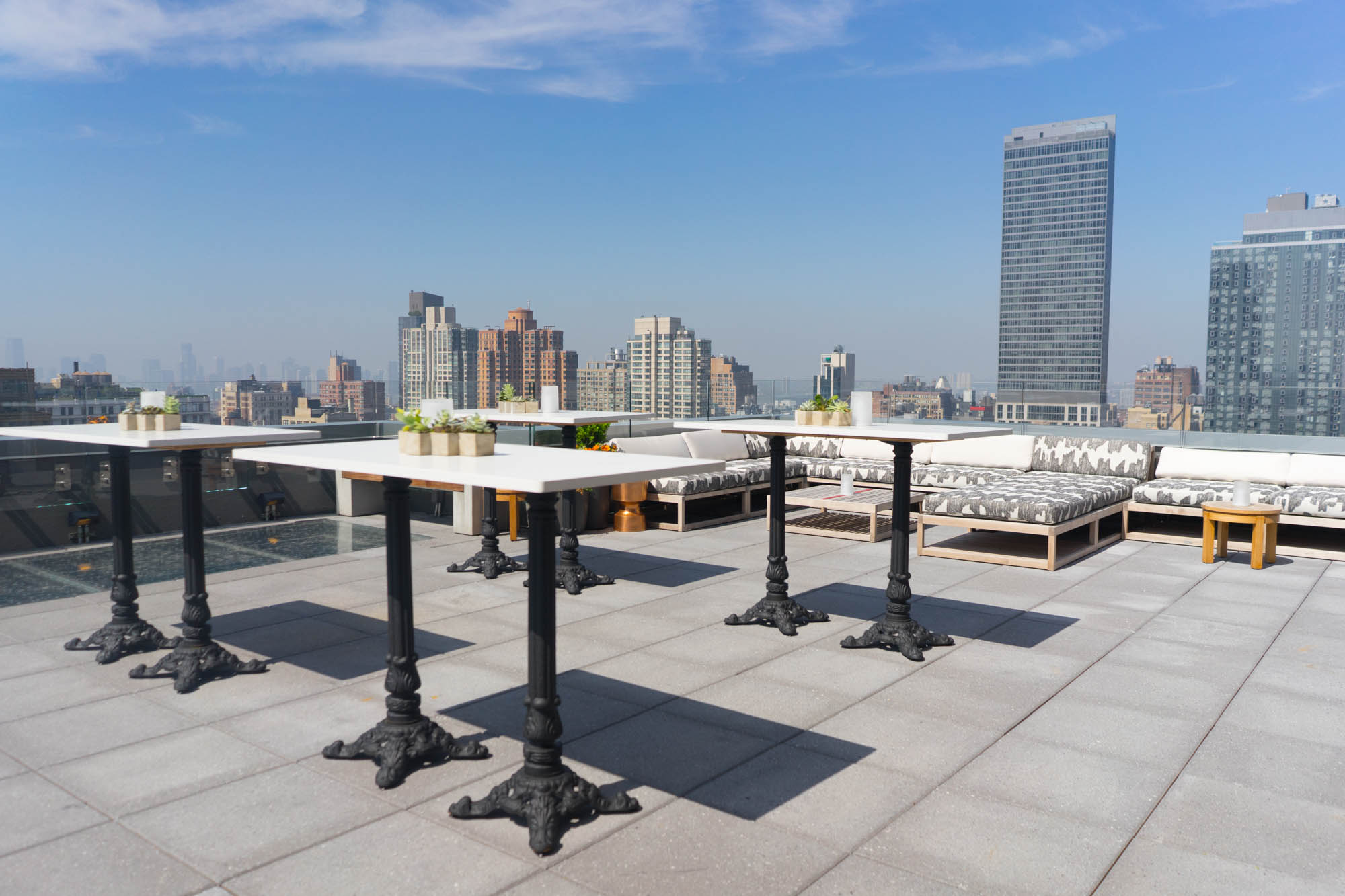 One of the highlights of the Arlo Nomad is definitely “The Heights” rooftop bar on the 31st floor. Do not miss this! I’ve been to a few ‘rooftop’ bars in New York but they tend to have obstructed views, whereas this one has 360 open views all around!

The rooftop is great for taking pictures or enjoying a cocktail in the sun after 4pm. There’s even a glass floor feature that enables you to see the city streets below – maybe don’t stand there if you have vertigo! 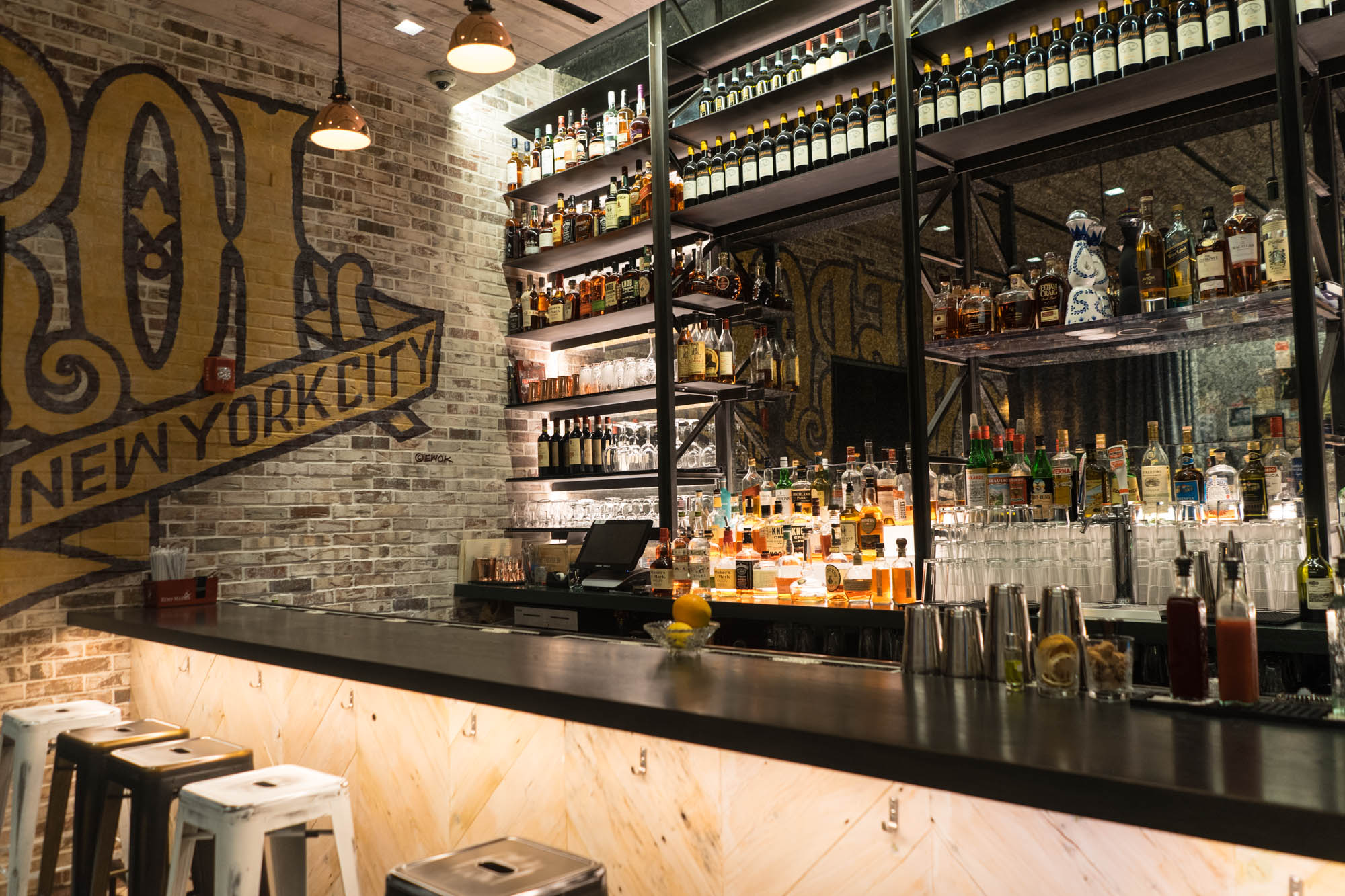 The rest of the hotel is very tastefully designed with plenty of common areas where you can sit with your laptop, charge your phone or just read a magazine.

On the second floor you have “The Studio”, which shifts from a co-working space during the day to hangout space in the evenings. There’s also BARlo, where you can sip on a cocktail and chat to your friends or fellow guests.

On the ground floor you’ll find a restaurant called MASSONI, which serves breakfast in the mornings and Italian-style cuisine by Chef Tale Dale throughout the day. If you’re short on time and you just want to grab a snack before sightseeing, then definitely pick up something from “Bodega” which is a 24-hour pantry serving sandwiches, pizza slices and coffee to-go.

The Best Place to Stay in Midtown

The Arlo Nomad is in the ideal location in Midtown – away from the overcrowded streets of places like Times Square. I loved the service, the stylish common areas, the food and the rooms – there’s really nothing I could complain about. Hotels in NYC are never cheap but this is definitely one of the most affordable boutique hotels that’s perfectly designed with the modern-day traveller in mind.  Arlo Nomad also has a sister property in Soho called Arlo Soho, and I’d happily stay at either one next time I’m in New York City.