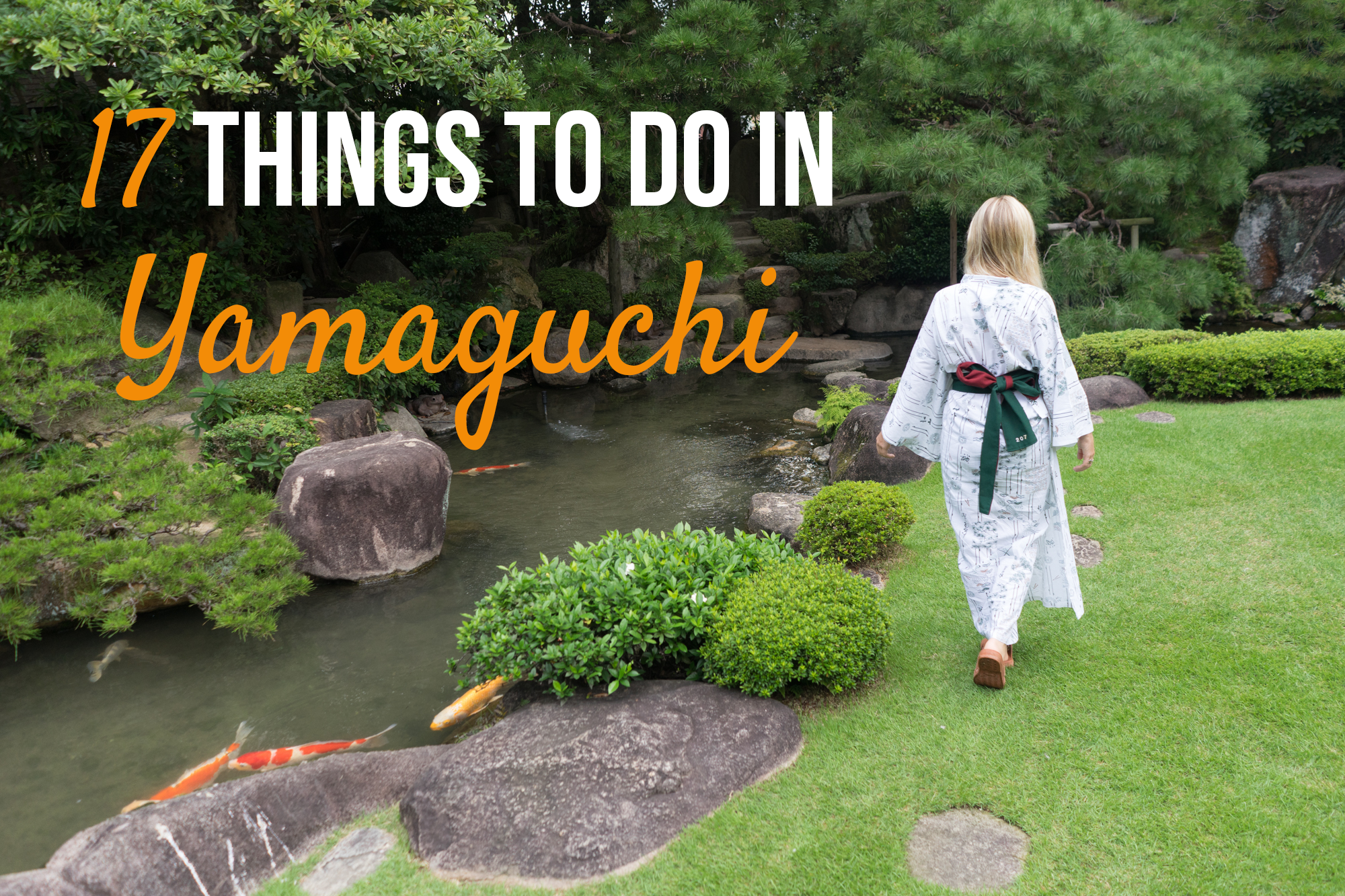 18 Oct 17 Things to Do in Yamaguchi, the Japanese prefecture you haven’t heard of

When I told my friends I was visiting Japan for the first time, most of them immediately started talking about Tokyo, Kyoto, Osaka – the usual ‘first time’ Japan travel destinations. So when I mentioned that no, actually I was visiting Yamaguchi, they looked quite puzzled. “Where’s THAT?” they asked me.

Yamaguchi is is a prefecture in the Chugoku region of the main island of Honshu. If you look on the map it’s basically the westernmost prefecture of the main island and you can get there by bullet train or a short flight from Tokyo. Over my very busy three days in Yamaguchi I discovered that this is a destination explored mainly by people living in the prefecture and sometimes even people in Japan don’t know much about it. The tourism board would however like more foreign tourists and Japanese people to visit the area, hence why I was invited there to discover everything it has to offer.

I love to visit destinations that are a bit more off-the-beaten-track and Yamaguchi is definitely the place to visit if you want to go somewhere less visited by tourists. Coming from the hustle and bustle of Tokyo, it was really interesting to see the contrast from big city to rural, countryside Japan. I felt like I’d been transported to a different world. If I had to some up Yamaguchi I’d say it’s the ideal place to relax, unwind and experience a traditional Japanese onsen (hot spring) but there are so many sights in the area too.

Here are some of the top things to do in Yamaguchi prefecture: 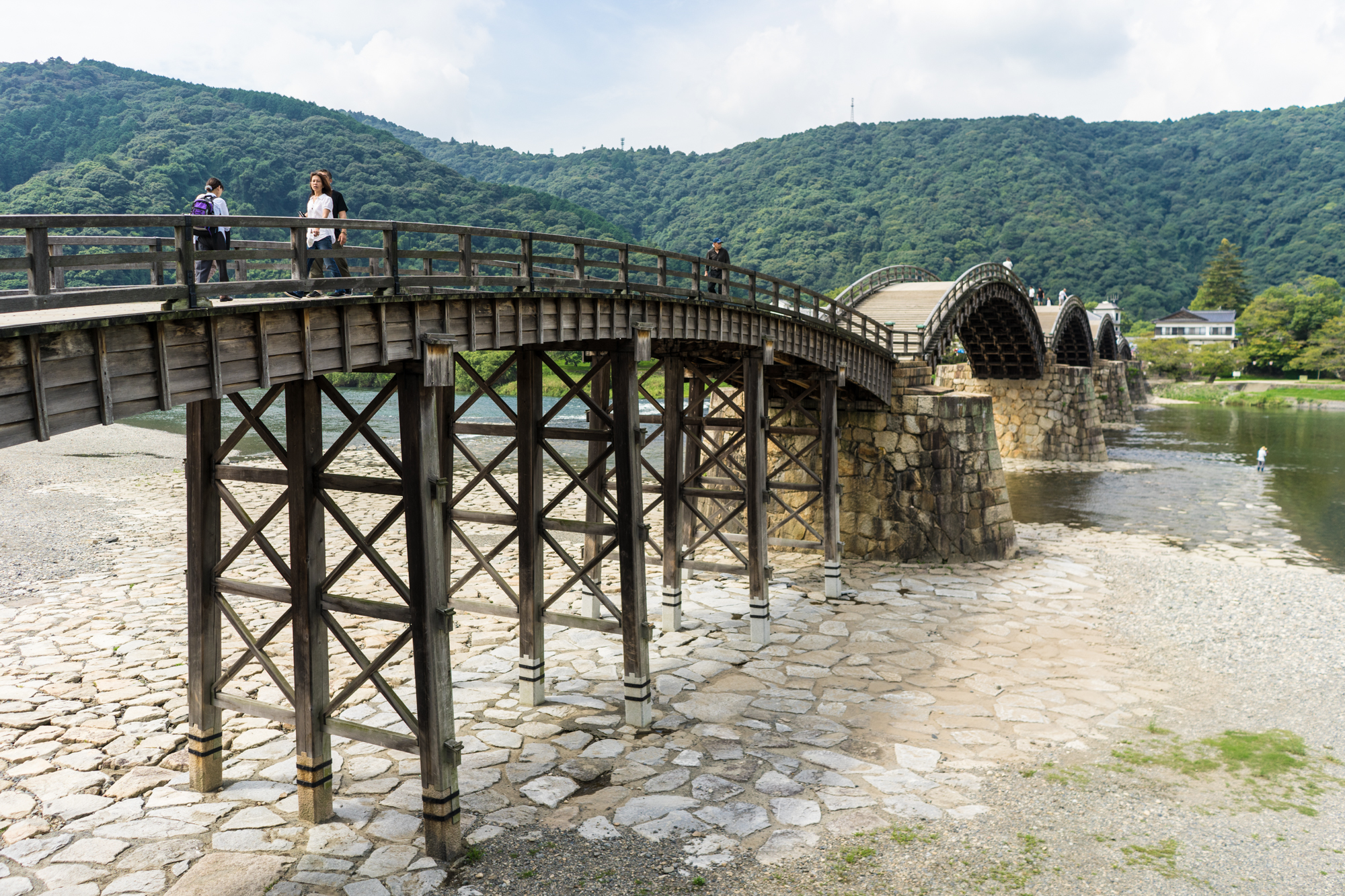 The Kintaikyo bridge is an iconic structure in Iwakuni, with distinctive curved arches stretching across the Nishiki River. The scenery here is really beautiful and varies according to the seasons, with cherry blossoms in spring, golden leaves in autumn and snow capped mountains in winter. After crossing the bridge we watched fishermen catching their last cormorants of the season, before visiting the Iwakuni Shirohebi museum, where we learnt about the white snakes that inhabit the area. We then met the owner of the Iwakuni Art Muesum, who has collected a huge number of samurai swords, helmets, armour and weaponry from auctions around the world. 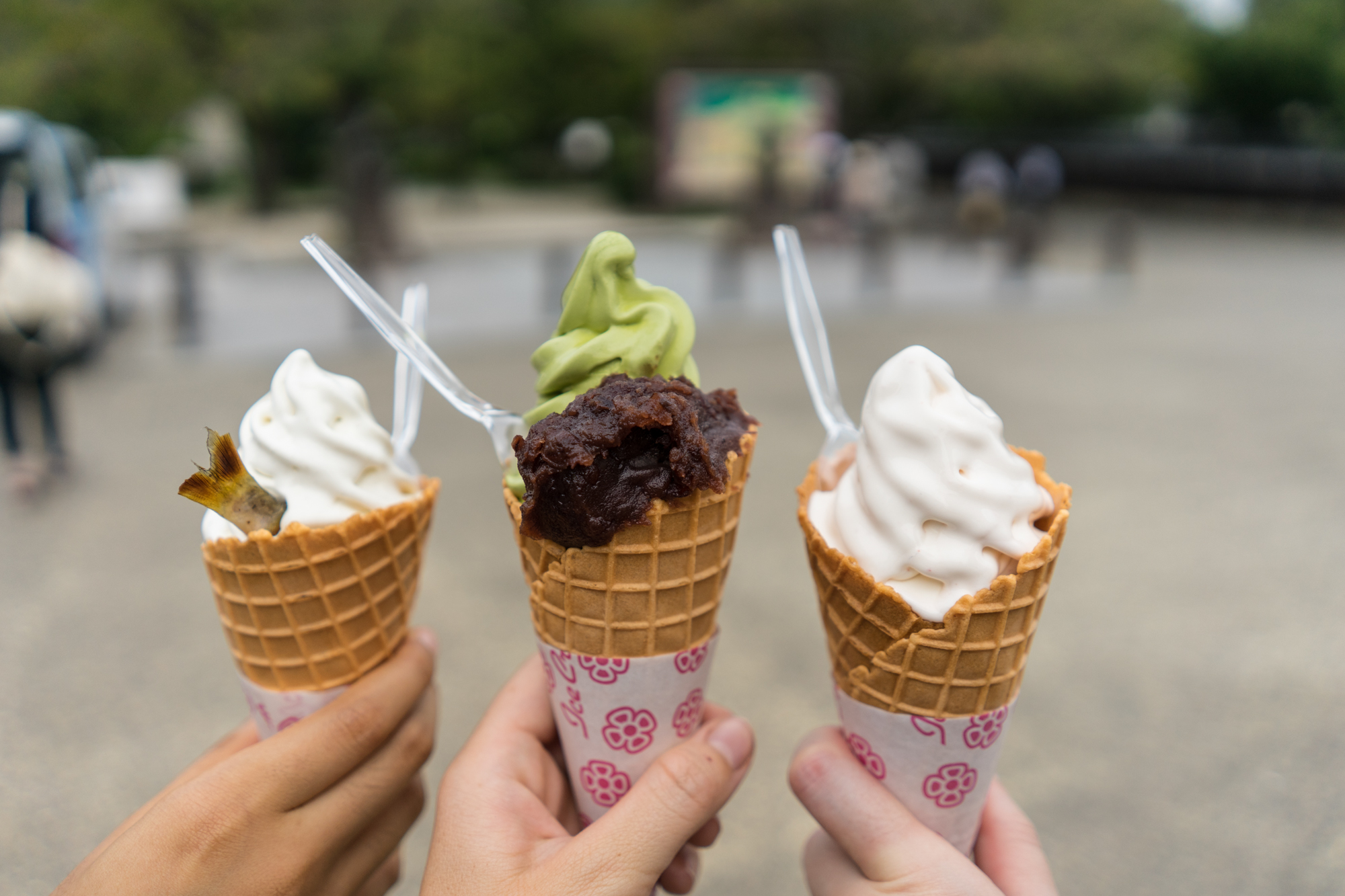 You may have heard stories about fugu, which, if not prepared correctly, can be fatal. Well in Shimonoseki you’ll have plenty of opportunity to try fugu and you don’t have to worry about being poisoned because establishments have to have a licence to sell it. You’ll often see the fugu sashimi laid out on plates in beautiful petal patterns – they look so pretty! I tried fugu at Otani Sanso and I did not die. #Winning.

When you visit Iwakuni you’ll want to try a speciality called ‘Iwakuni-zushi‘, which can be prepared for as many as 150 people at one time. Across the Kintaikyo Bridge you can also visit the ice cream shop which boasts over 100 flavours of ice cream, including strange flavours like garlic and sweetfish,since the Nishiki River is known for its sweetfish! 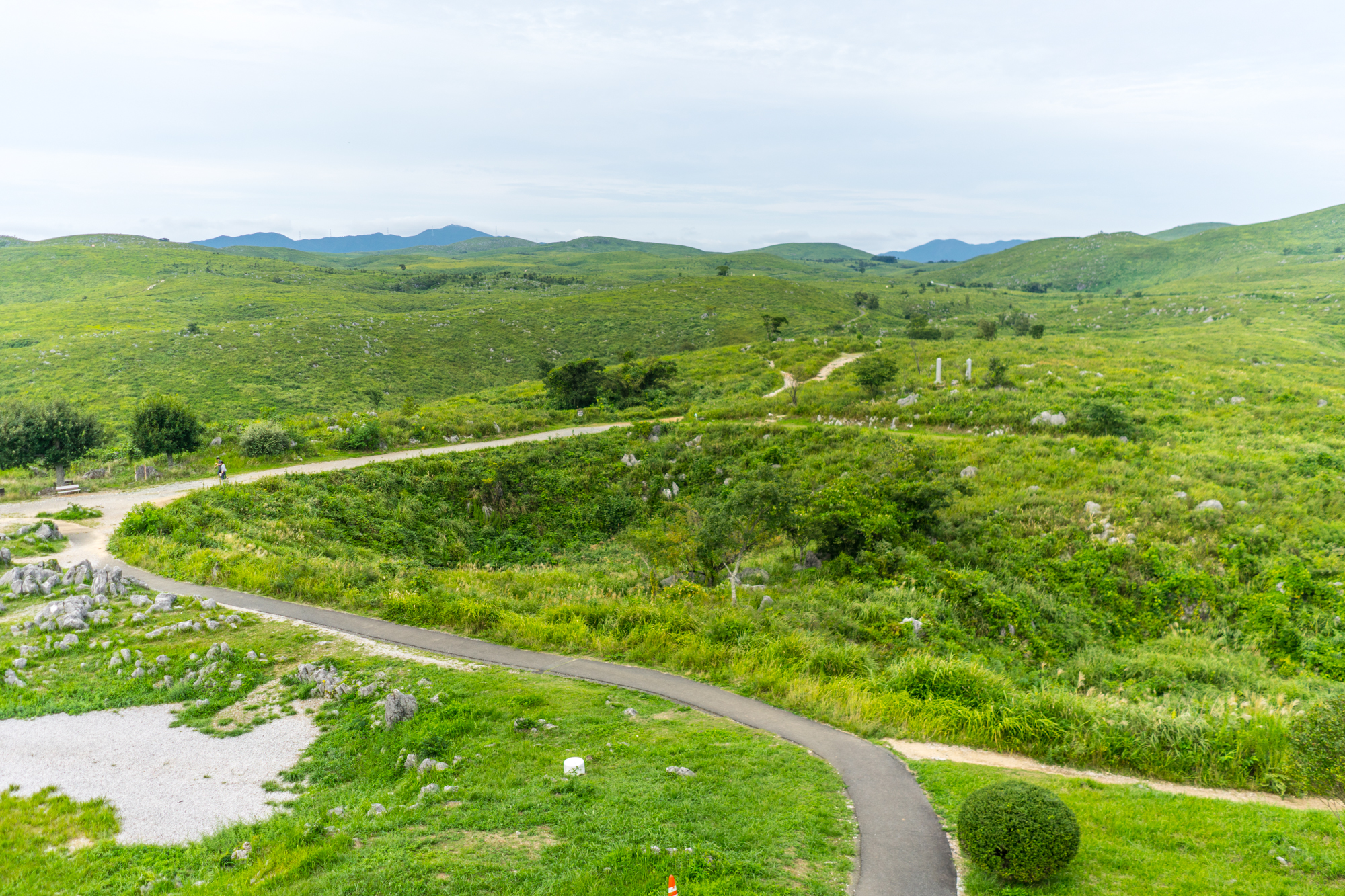 One of the first things you’ll notice about Yamaguchi is the mountains and greenery. Akiyoshidai is Japan’s largest karst plateau – a vast, green, grassland sprinkled with white limestone spreading as far as the eye can see. After admiring the scenery from the lookout point we then visited Akiyoshido, which is one of the largest limestone caves in Japan. My favourite features of the cave were the “Golden Pillar” and “One Hundred Plates”, which has hundreds of dishes filled with water. If you’re feeling adventurous, you can also go spelunking inside the cave!

4. Bathe your feet at Yuda Onsen 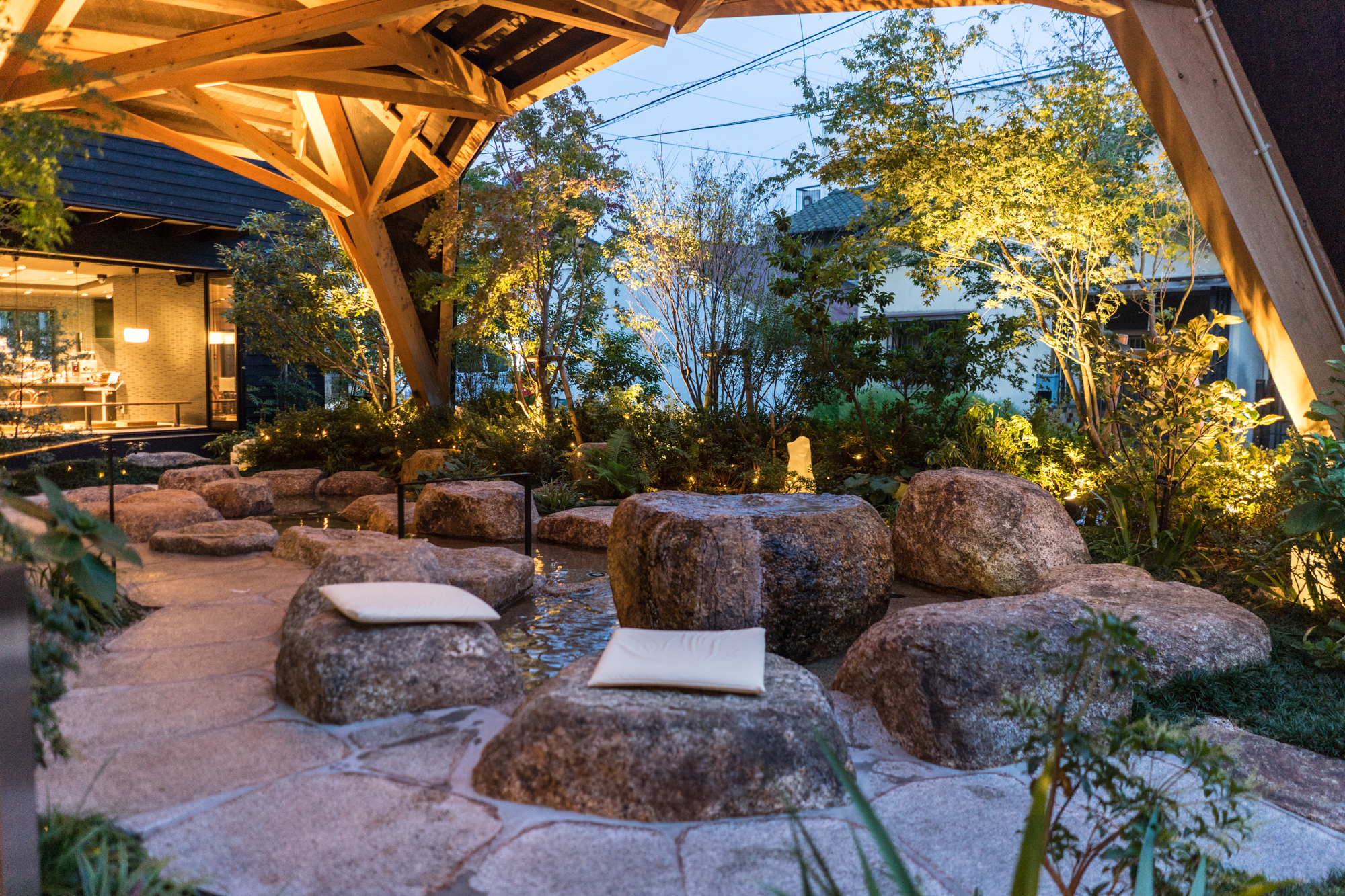 Yamaguchi is an amazing place for spa activities, so after a long day of sightseeing it was nice to pull my shoes off and bathe my feet in a natural hot spring. Sitting on a cushion surrounded by twinkling fairy lights, I soaked my aching feet in the water and instantly felt a lot more relaxed. Legend has it that a spiritual white fox came to Yuda Onsen to nurse his wounds and was discovered there by a Buddhist priest, so there are fox paw prints embedded in the stone. 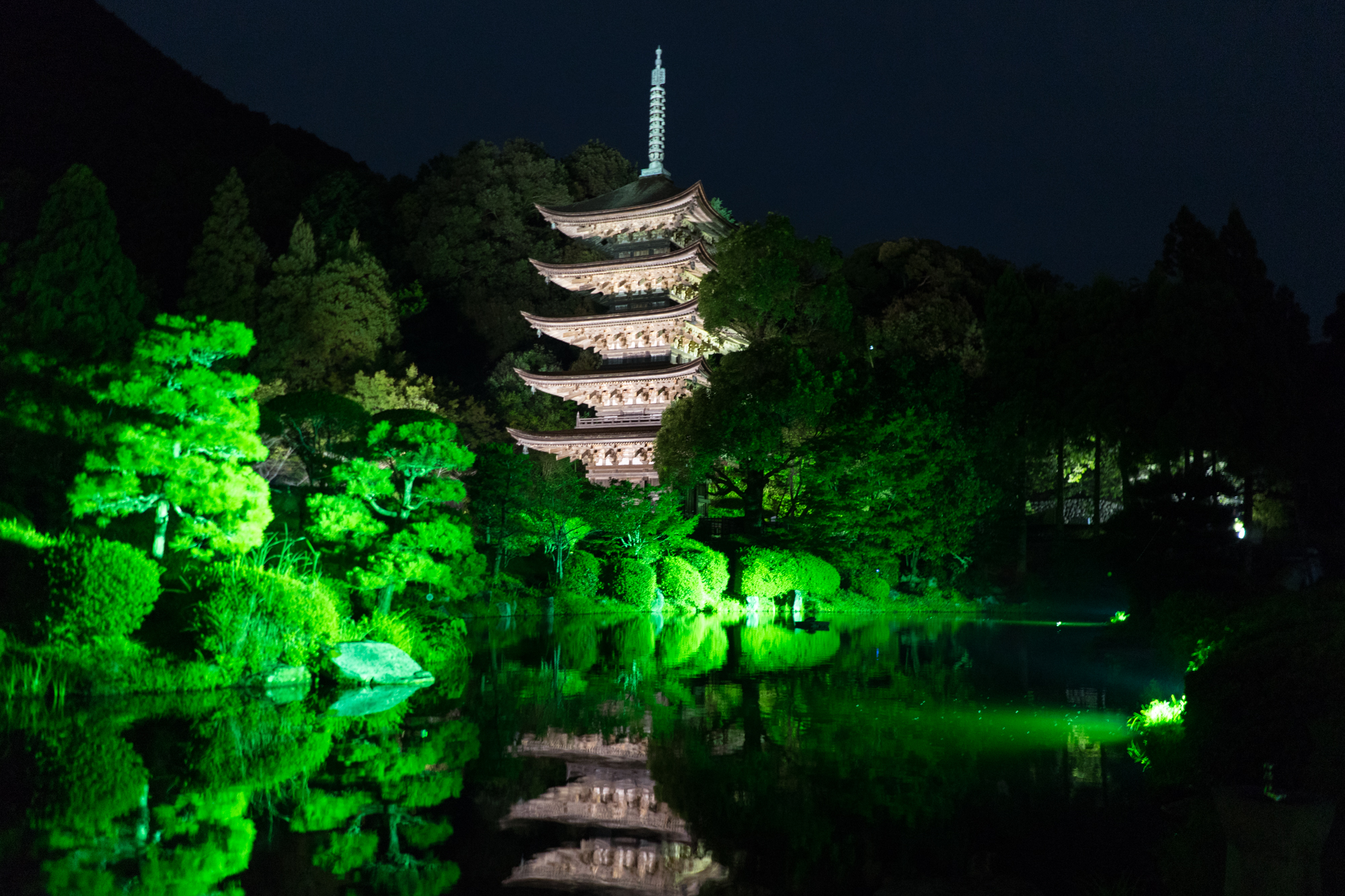 Following dinner at an Izakaya (Japanese style pub) in Yamaguchi city we visited the Rurikoji Temple, which is illuminated at night from sundown until 22:00. This five-storied pagoda is known as the ‘national treasure’ and is really quite stunning when you see the beautiful green colours reflected in the water.

6. Sleep in a Ryokan 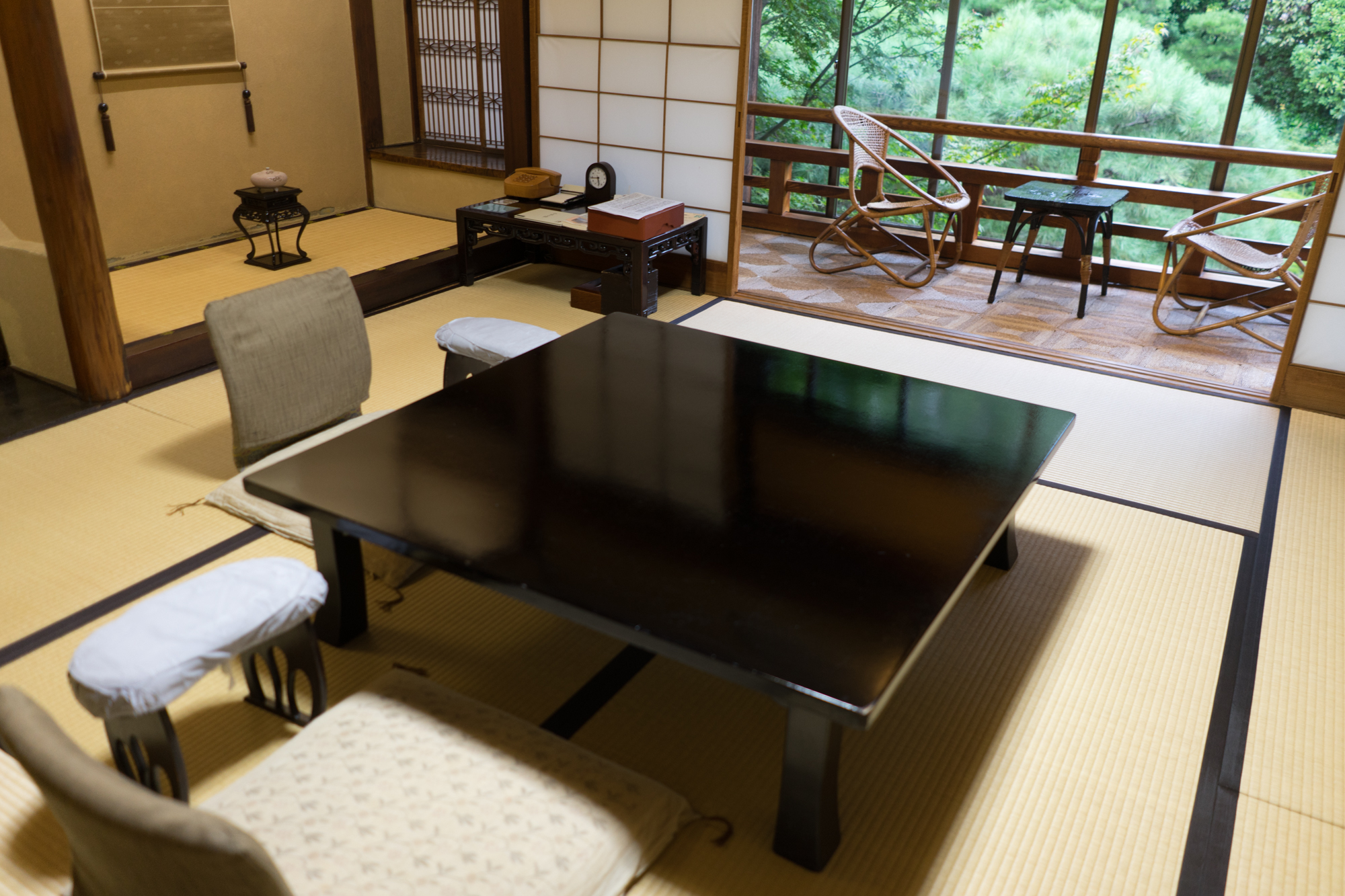 Ifyouwant a true Japanese experience, then stay a night or two in a Ryokan. These traditional inns originated in the Edo Period and are typically located in more scenic areas like Yamaguchi. I spent one night at Matsudaya Hotel and I had one of the best sleeps I’d had in a long time! The floors are covered with tatami matts so I had to take my shoes off before entering, and I was surprised to find no bed inside, just a living area. When I came back to my room after dinner I discovered the owner of the hotel had moved the table aside and laid out bedding on the floor, along with yukata (Japanese pyjamas) to change into. I had the best sleep I’d had in a long time! My room looked out onto a peaceful Japanese garden, so the whole experience was incredibly peaceful and a great way to disconnect the outside world. 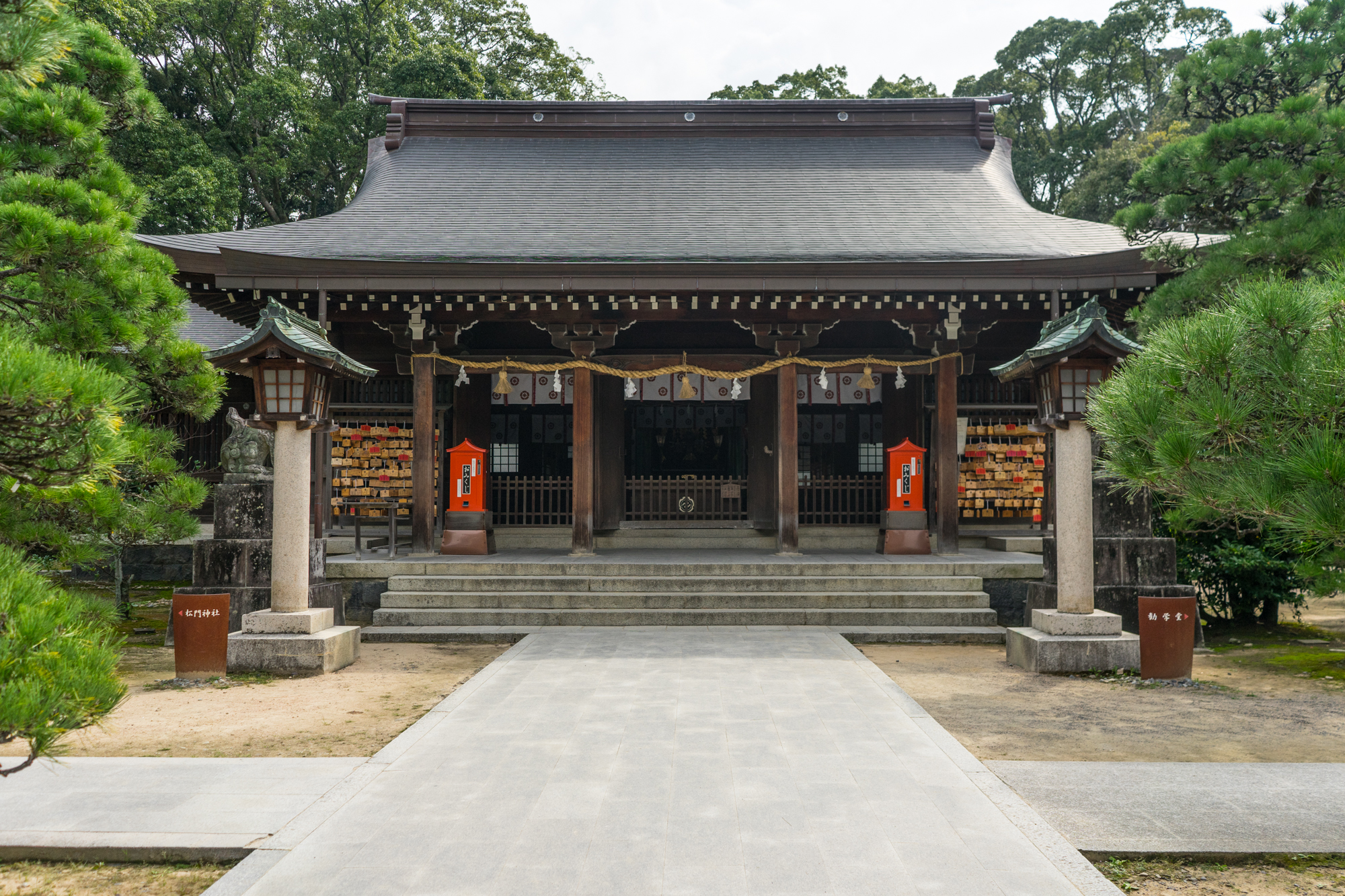 Once we arrived in Hagi we visited the Shoin-jinja Shrine which is dedicated to the important historical figure Yoshida Shoin. Here we saw Sokasonjuku Academy – a private school where he taught students for more than 2 years, producing great talents who made major contributions during the Meiji Restoration. 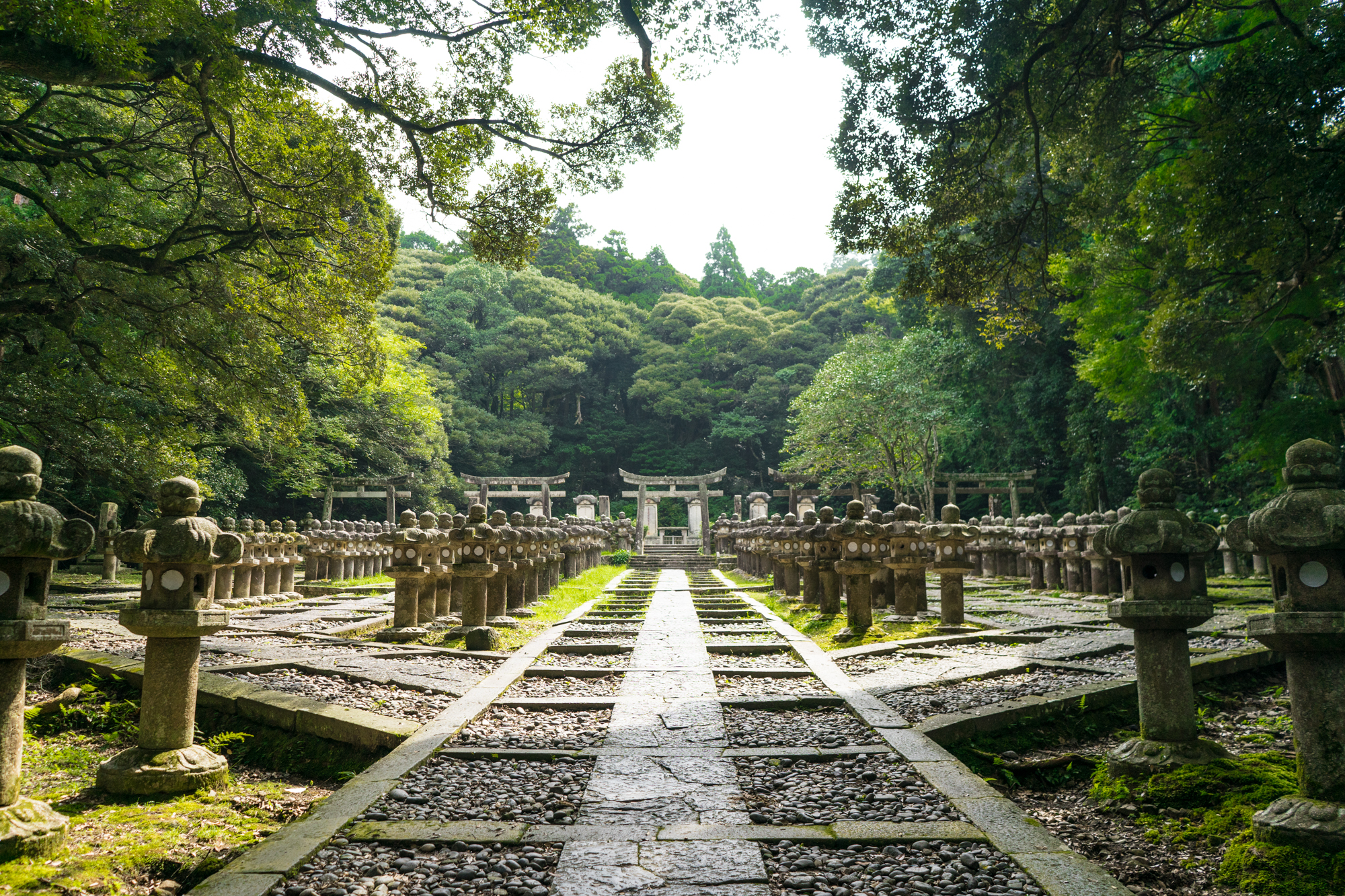 Toko-ji temple in Hagi is one of the family temples of the Mori clan and it reminded me a little bit of Tomb Rader and Angkor Wat. Constructed in 1691, it features over 500 stone lanterns and hosts the graves of the odd-numbered Mori Lords. This ancient temple is covered in green moss and is definitely impressive to look at. 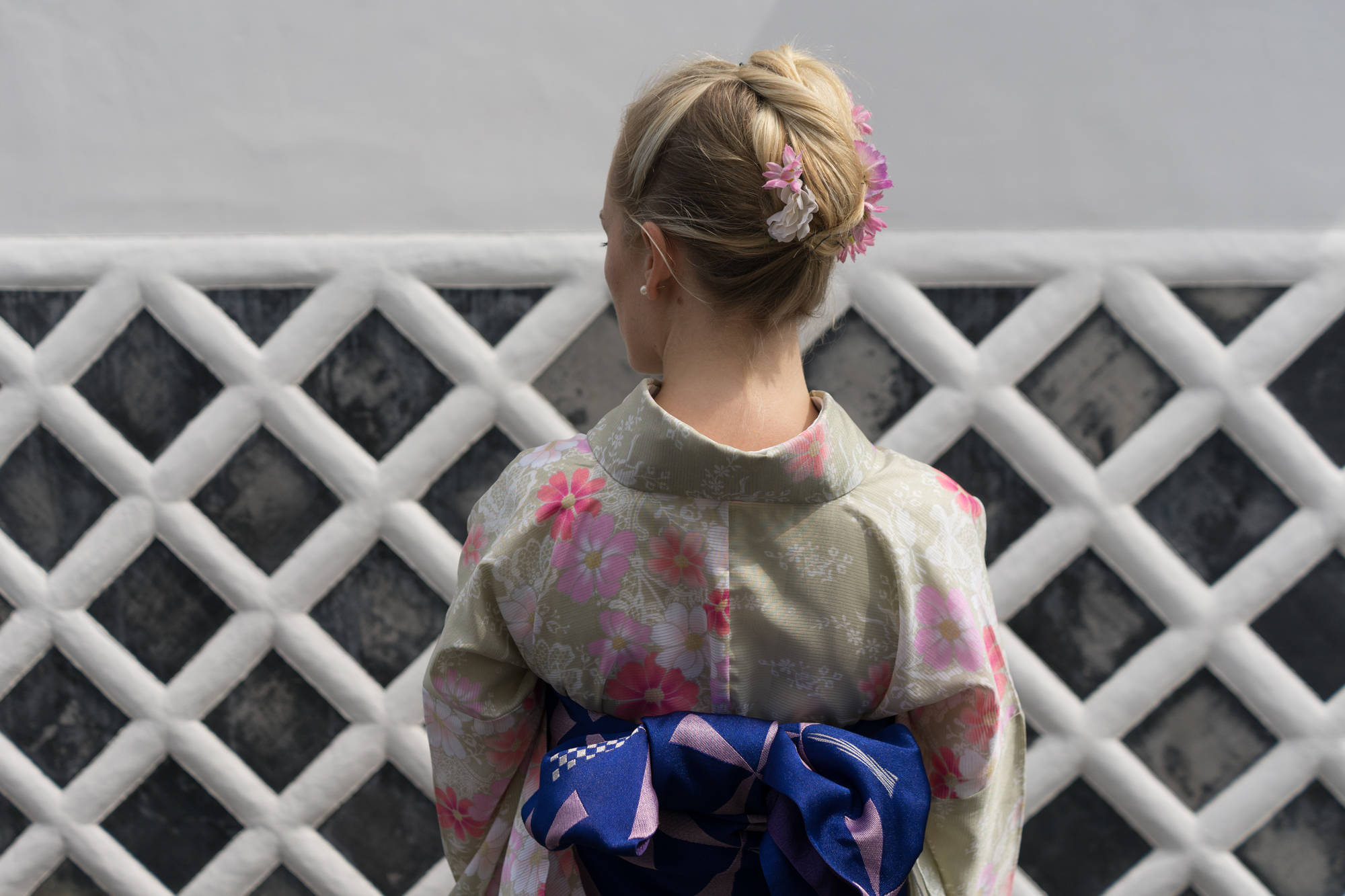 When I go travelling I really enjoy experiences as opposed to sightseeing. Trying on a kimono was really interesting experience for various different reasons. The shop owner chose colours that suited my skin tone and hair colour, then we went into the dressing room to put it on. There were so many layers and she had to pad out my body to make sure that I had no curves – just a completely straight body shape. It was interesting to see how she chose the colours of the belt to match my kimono and she put my hair up into a beautiful bun with flowers. Walking in a straight line in the kimono was a little bit difficult since it is so restrictive but it was definitely good for my posture! We walked down the street to a Japanese garden to take some photos, then enjoyed a cold refreshing drink afterwards. It was certainly nice to dress up and experience the Japanese culture through fashion. 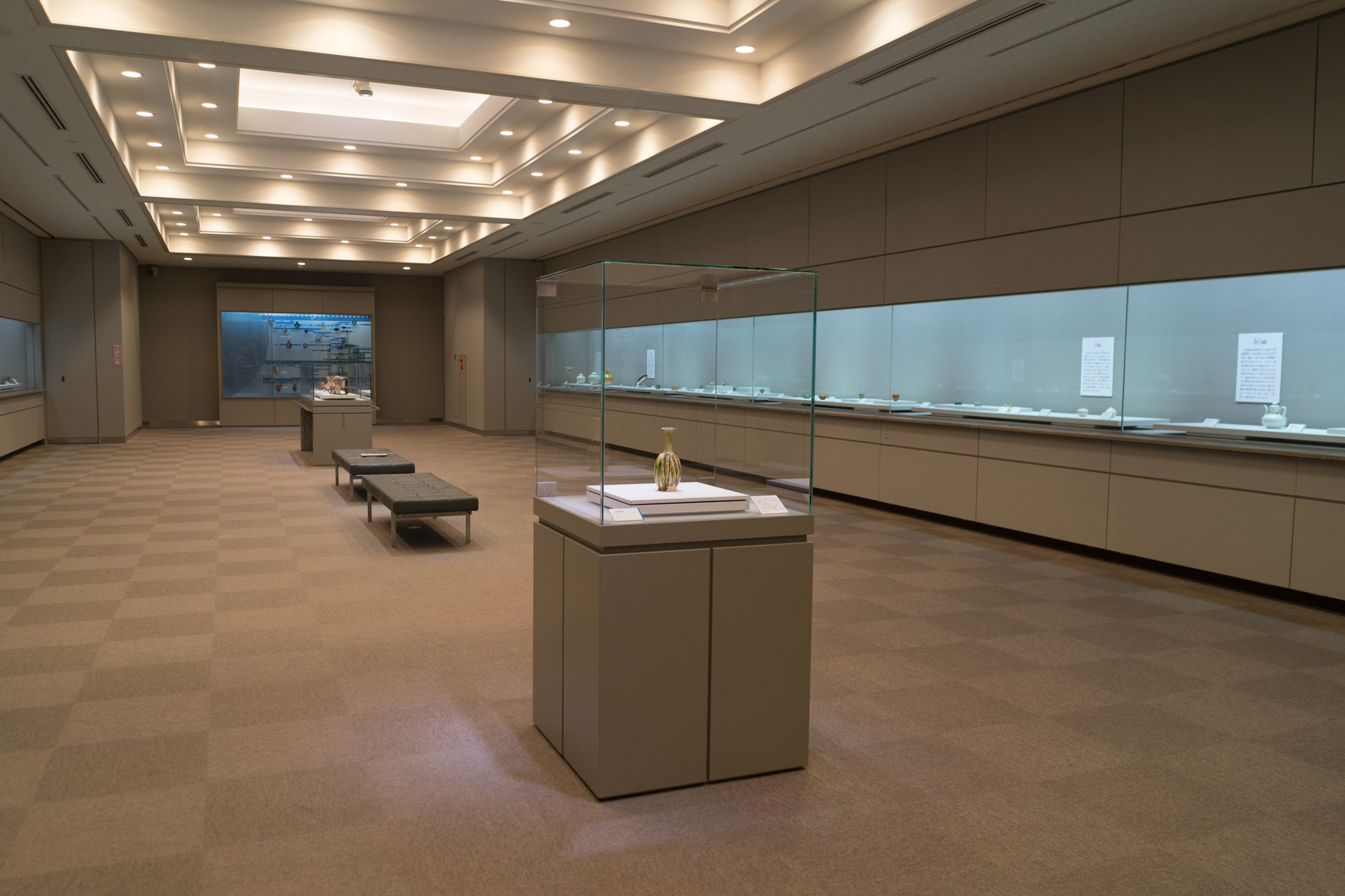 Inside the museum we saw a number of ceramics and Japanese prints in an exhibition called ‘Crazy about Ceramics, Excited about Ukiyo-e’. The highlight for me was the section featuring wood block prints by Utagawa Hiroshige and Katsushika Hokusai, with my favourites being ‘The Wave’ and three scenes from the ’36 Scenes of Mount Fuji’. It was really interesting to learn that the prints are displayed for one month then stored for years, to preserve the colours. 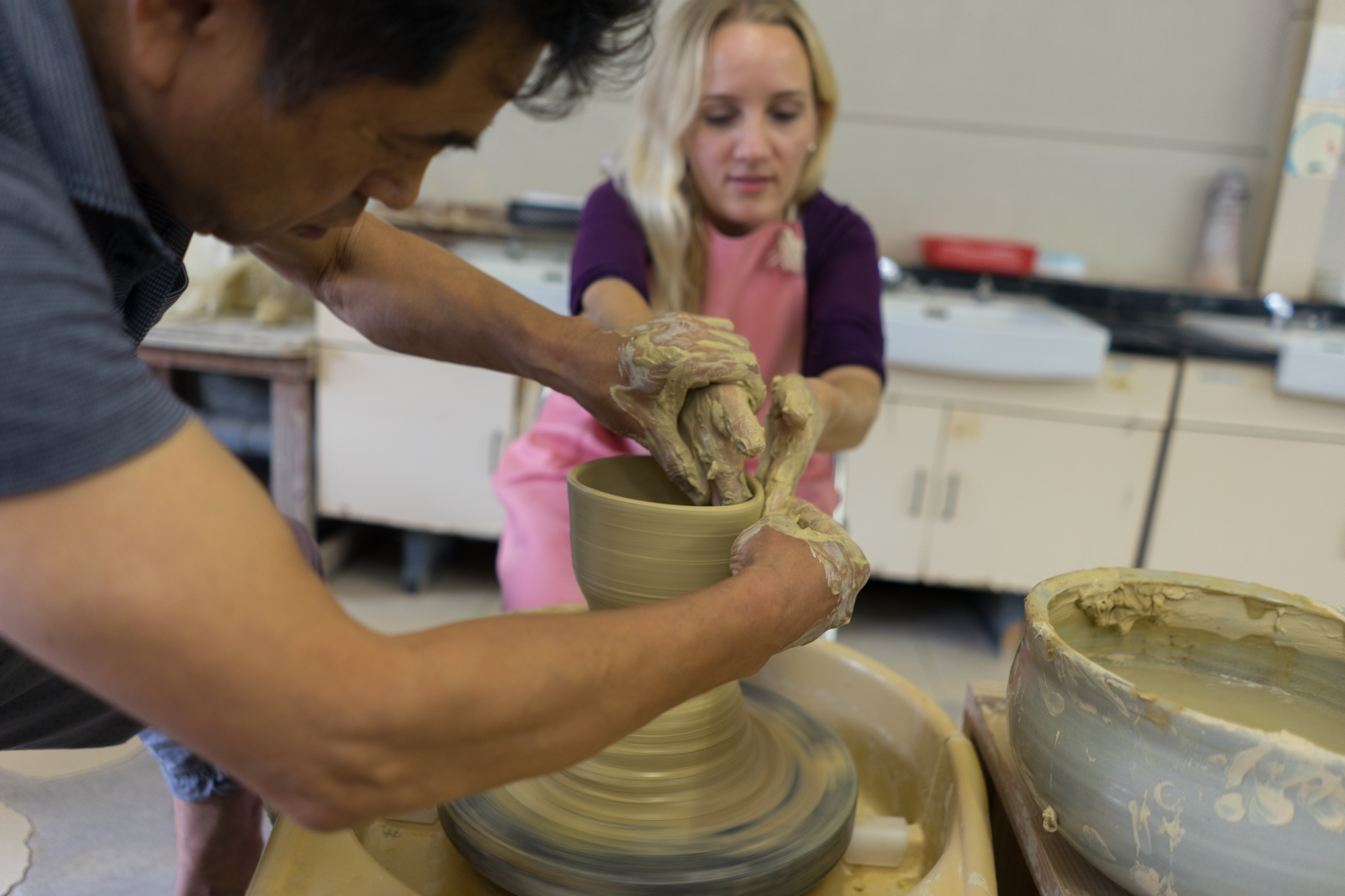 Hagi is known for its pottery so we had a go at making our own, with the help of a professional. I chose to create a bowl for serving food in, so the man showed me how to guide the clay into the right shape and give it a ‘Hagi’ style by pressing my thumb into it to make an imperfection. Best of all, they offered to deliver my bowl to the UK, so I’m just waiting for it in the mail!

Visiting the ‘onsen’ (Japanese hot springs) is an interesting experience for foreign tourists, mainly because it involves get naked, so if you’re not used to it this can be a little bit awkward. I had my first onsen experience at Otani Sanso – a large, luxury hotel with incredible rooms that are available in both Western and Japanese style. You sit on a little stool and wash thoroughly before you get into the baths, then wash again upon leaving, so as you can imagine I was the cleanest I could ever possibly be! 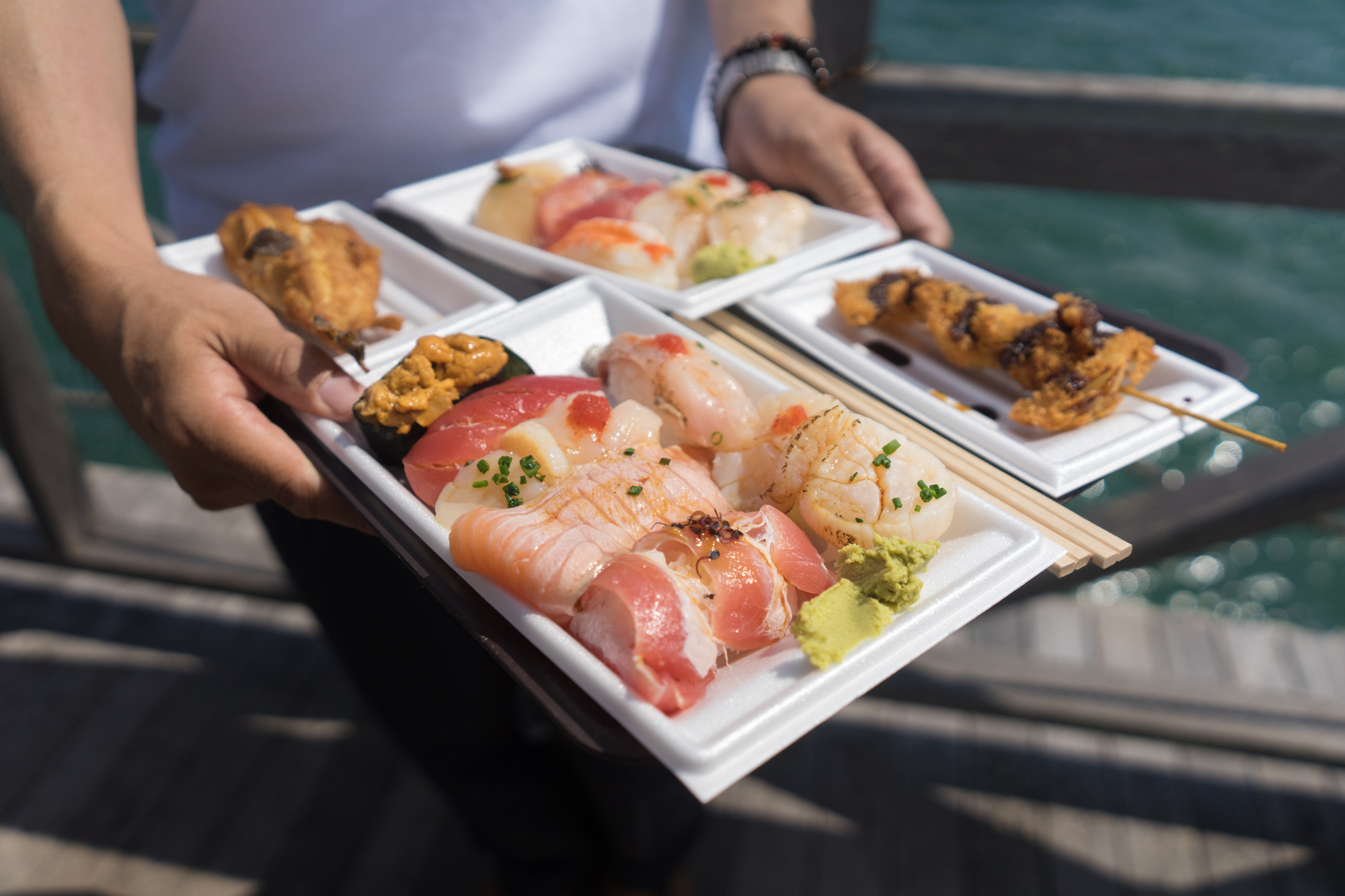 Do  you love sushi and raw fish as much as I do? If so, Karato Fish market is going to be your Disneyland. The market is jam-packed with people all jostling for food at the many sushi stands. The fish here is really fresh and colourful, so I couldn’t help but pile my tray high with food. There’s a seating area above the market which offers great views from up high, or you can sit outside and enjoy your sushi next to the ocean. The entrance is marked by a giant puffer fish, which is the symbol of the Shimonoseki area. 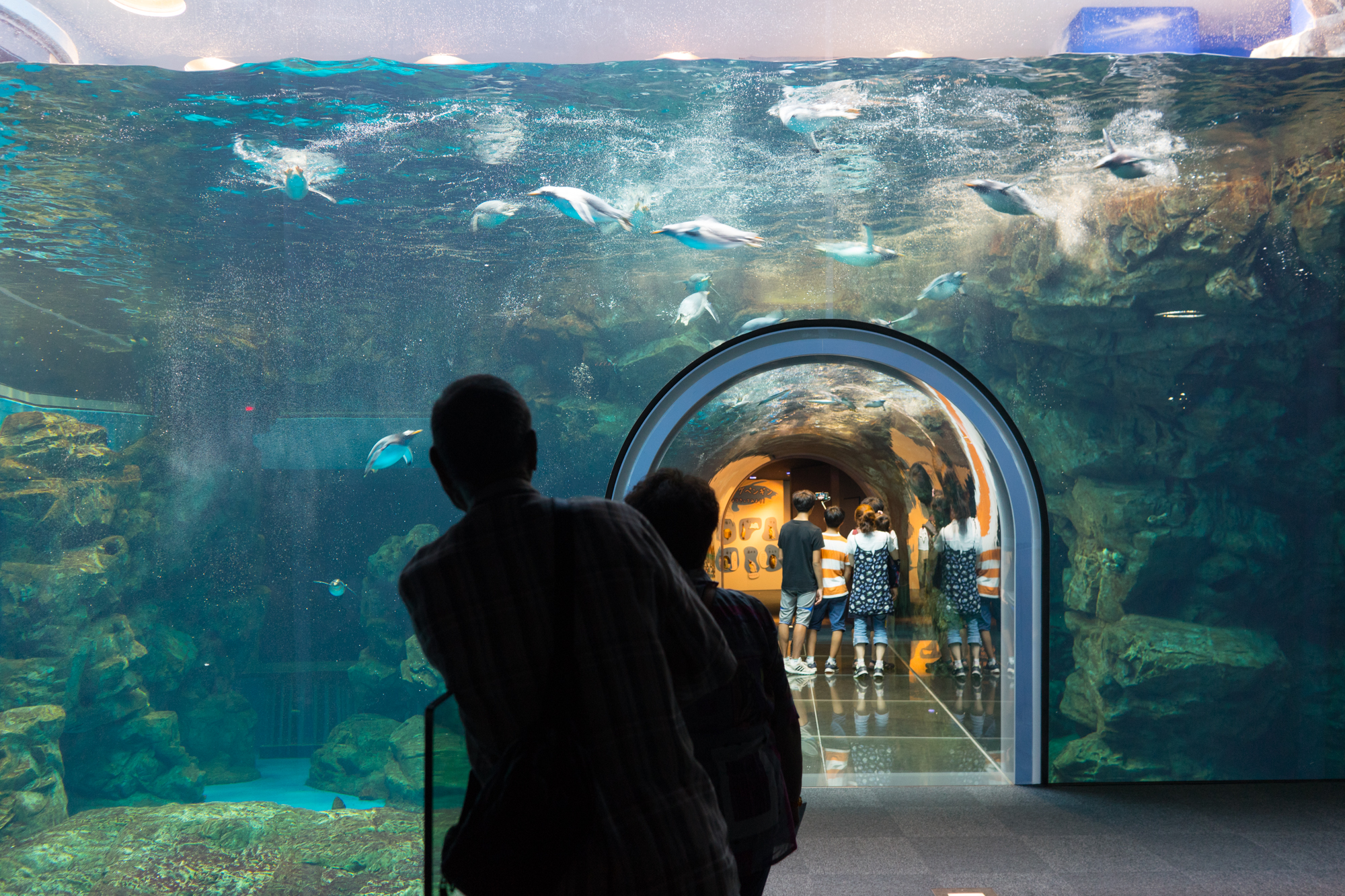 I really enjoy visiting aquariums and the Shimonoseki Aquarium was filled with all sorts of marine life from jellyfish and turtles to seals and penguins. Since Shimonoseki is known for its fugu, you can also see around 100 types of puffer fish swimming around in the tanks. The penguin exhibit is really cool because you can watch them swimming around on the surface of the water, before walking through a tunnel to see them swimming around from below. There’s also an enormous blue whale skeleton on display, which is the only one of its kind in Japan. 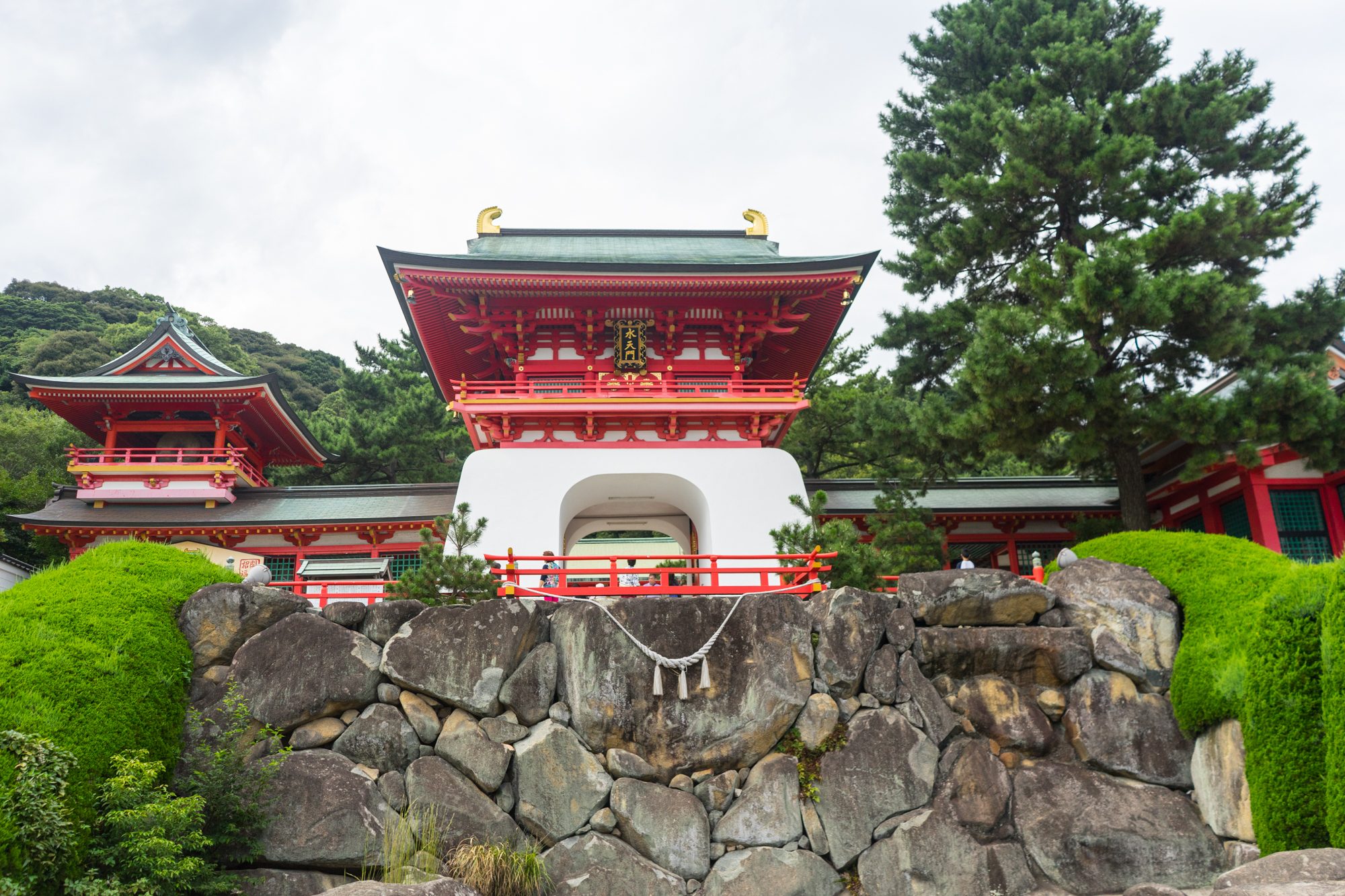 Akama-Jingu Shrine has a beautiful red and white colour, with magnificent red and gold gates. The shrine is dedicated to Emperor Antoku, who drowned himself after the defeat of the battle that divided Japan into two around 820 years ago. To get to the shrine you have to climb some stairs, so there are some brilliant reviews from the top. 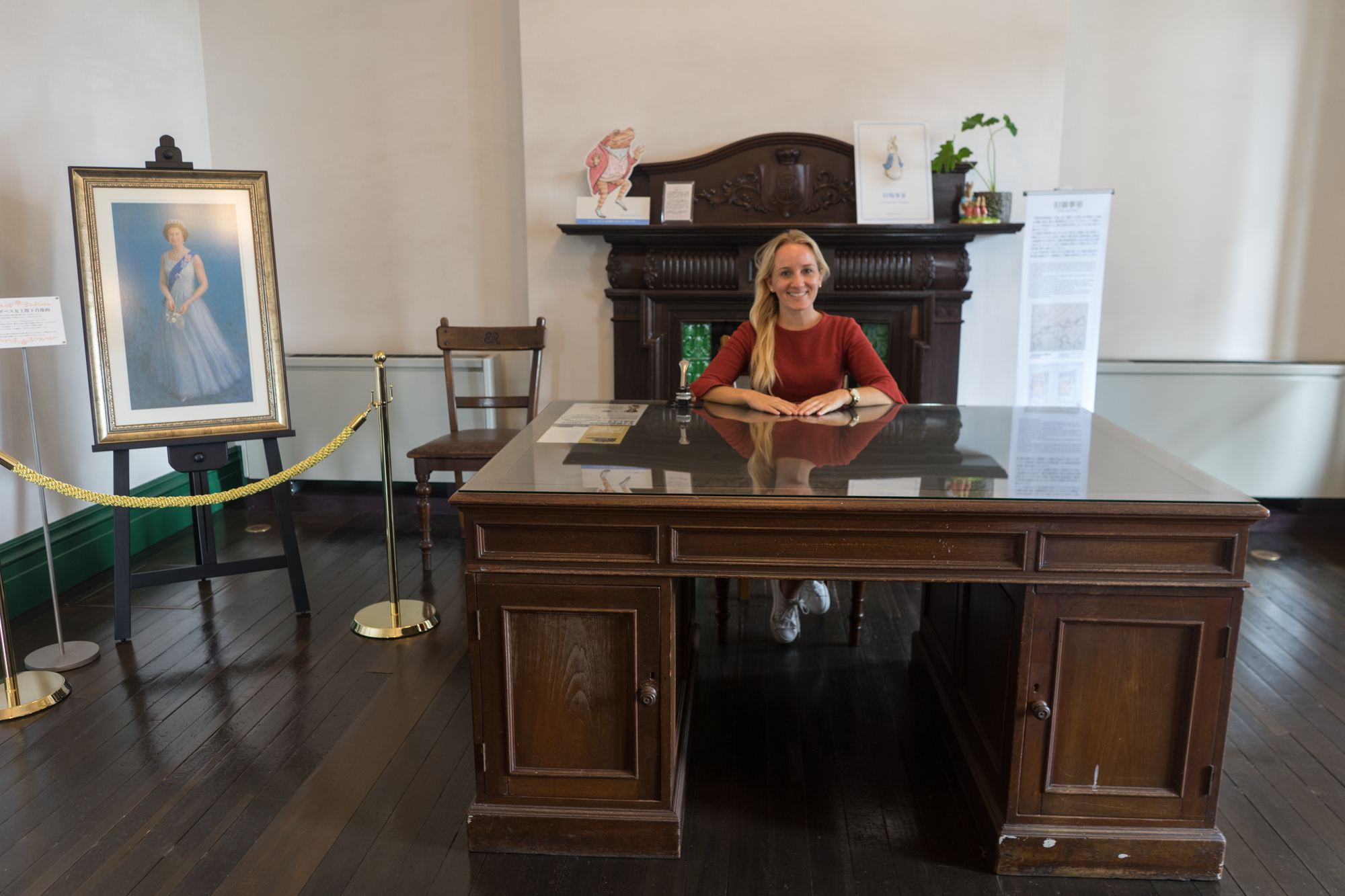 It was really strange to see the British Flag and Beatrix Potter in a place like Yamaguchi! The Former British Consulate was built during the Meiji era in 1906 but closed towards the end of 1940. Over the years it was used for various purposes, becoming a police station and an archeaological museum, but today the building has been restored and designated as an Important Cultural Property. Inside the building on the 1st floor there is a portrait of Queen Elizabeth II and a reproduction of the former Consular Office, where you can sit down at the desk and have your photo taken. If you are feeling hungry there is a cafe upstairs where you can enjoy lunch or some tea. 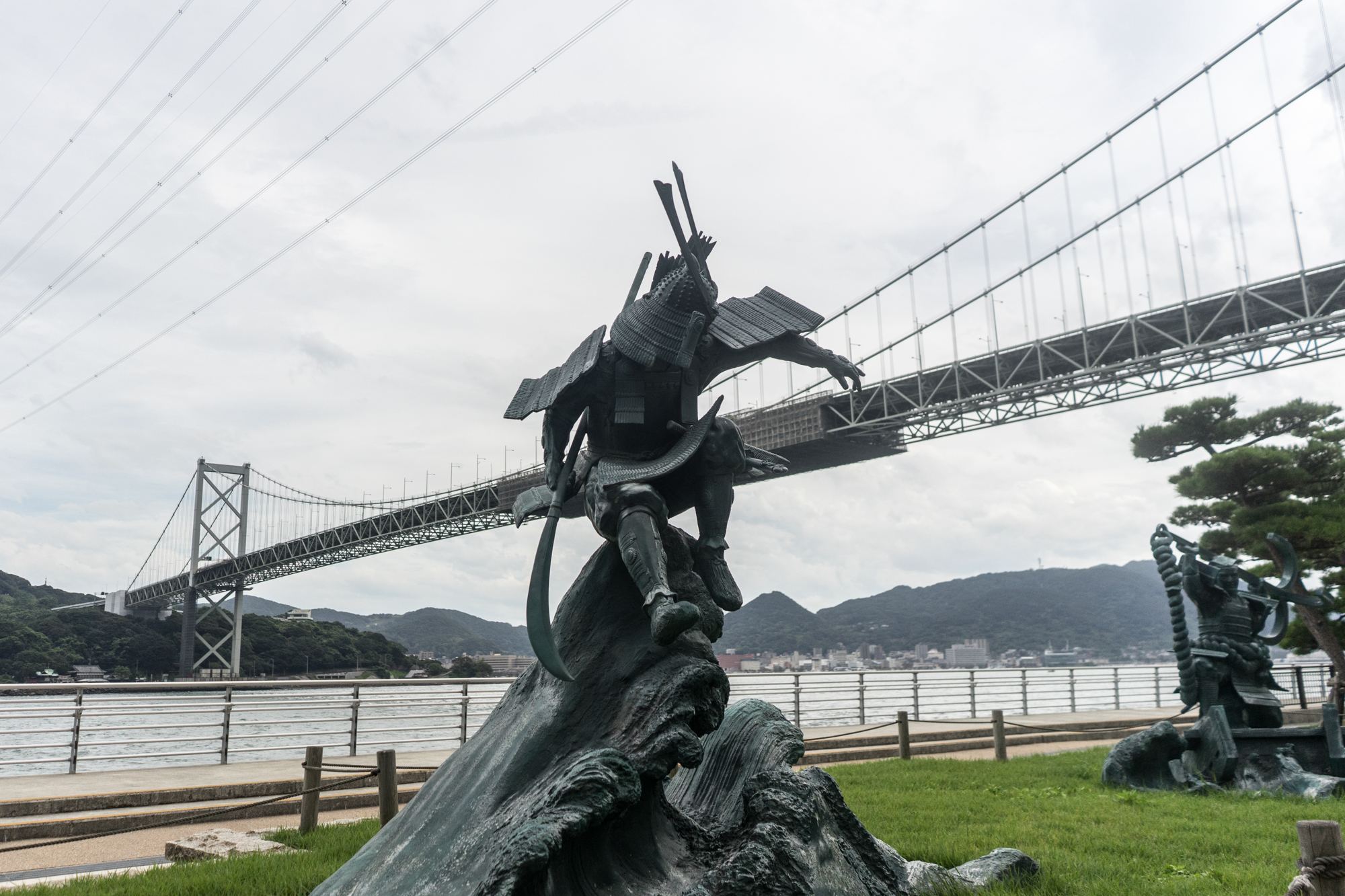 If you like learning about the Edo period, Mimosusogawa Park has a replica of the Choshu canon alongside statues of military commander Minamoto no Yoshitsune and Taira no Tomomori. The park is located on the waterfront in Shimonoseki, offering spectacular views of Kanmon Straits Bridge. It is located very close to the Kanmon Bridge entrance, which connects Honshu Island and Kyushu Island.

japan, things to do, yamaguchi