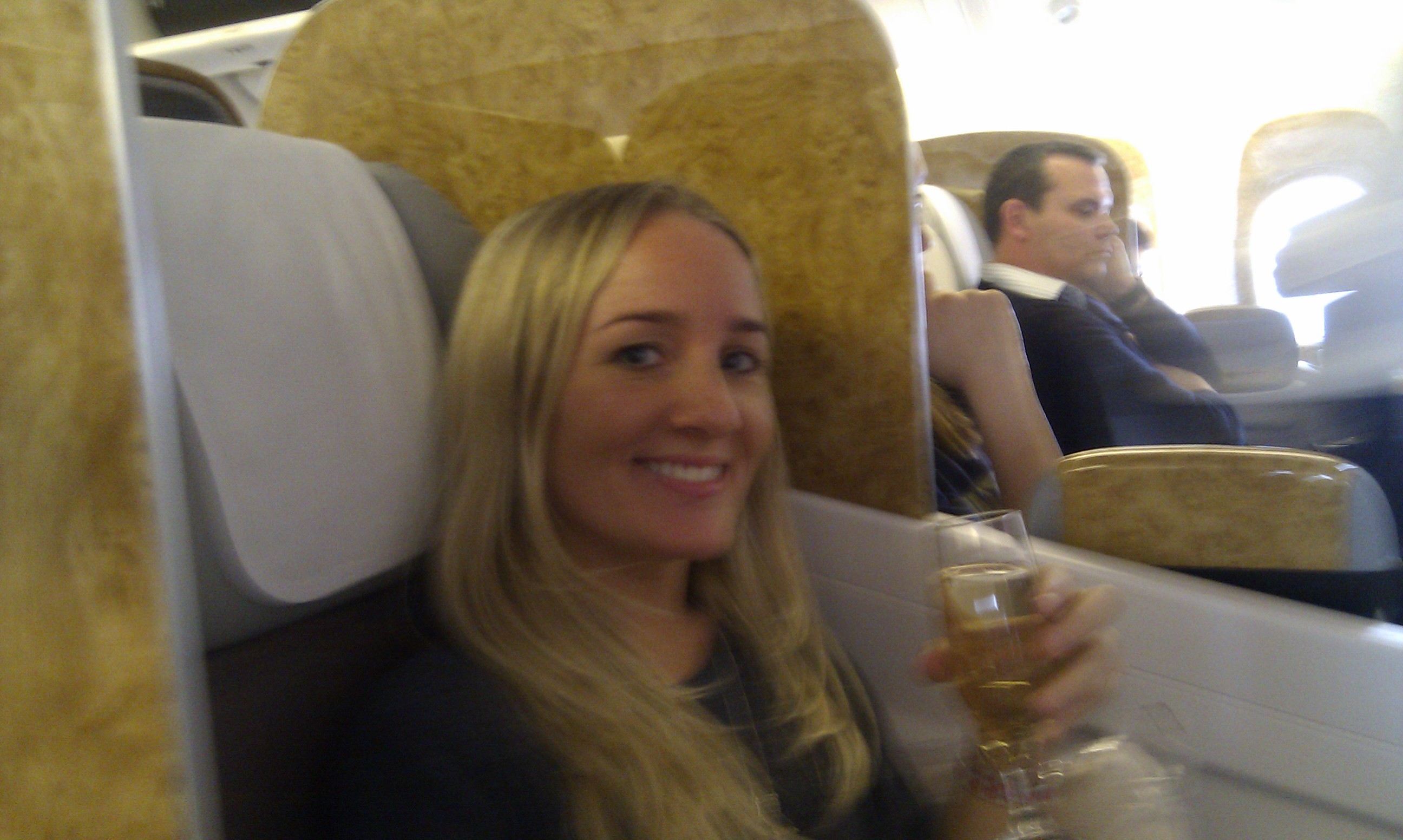 Posted at 16:40h in Blog by Victoria 14 Comments
Share

On my flight to Australia with Emirates, I got upgraded to Business Class! Yep I got a free upgrade and I even did a little dance in my seat. For 7 hours I was the happiest girl alive…it’s a shame I was flying Economy on the way back!

How to Get Upgraded to Business

Apart from accumulating air miles or actually buying a ticket, it’s really just all luck getting upgraded to Business Class on a long-haul flight. I remember once I was flying home from Bangkok on Etihad and it was my 21st birthday that day, so I tried to flutter my eyelids and get a free upgrade, but was unsuccessful.

When we landed in Singapore I thought we would be able to stay on the aircraft, but we were all ordered to get off, presumably so they could clean the cabin for the new passengers joining us from Singapore. We were told we had about 30 minutes before we could board the aircraft again, so I went to the bathroom to brush my teeth and freshen up.

I returned to the gate but I was near the back of the queue, and when I finally presented my boarding card, the lady said; “I’m sorry but I have to move your seat.”

“Is that a window seat?” I replied.

She scribbled out my seat number, and changed it to 6E. Now I naturally assumed that this was situated in the first few rows of Economy, and was a bit peeved that I wouldn’t be able to rest my head against the window.

Little did I know that I’d soon be curled up on a lie-flat bed with a glass of champagne.

When I boarded the aircraft, instead of pointing me to the right like the cabin crew usually do, they pointed me to the left!

All I could think was that there must be some sort of mistake. This was Business Class!

As it turned out, there was no mistake. Economy was overbooked and a few of us had been bumped up to the Business Class cabin. I was like a kid in a sweet shop, and I felt like I had gatecrashed a very expensive party.

There were three of us in a row who had all been upgraded, so we soon started snapping photos of each other and frantically texting everyone in our phone books about the exciting news.

I’ve only ever flown Economy, and I can see why they say it’s hard to go back to Economy once you’ve had a taste of Business Class.

As soon as I sat down I was offered a glass of champagne, and I started playing with all the functions in my seat. I turned the massage function on, pressed a few buttons on the remote to see what they would do, put my belongings into the storage space down the side and plugged my phone into the plug socket. 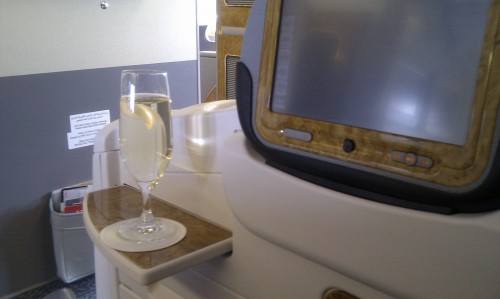 I was sat on the front row between two other seats, and I had heaps of legroom. The remote control for the entertainment system was about the size of the TV screens in Economy, and I was given a noise cancelling headset which really blocks out the cabin noise when you’re watching a movie. The flight attendant also handed out amenity kits containing BVLGARI perfume, creams and other goodies. 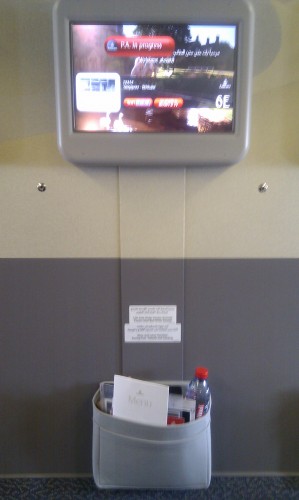 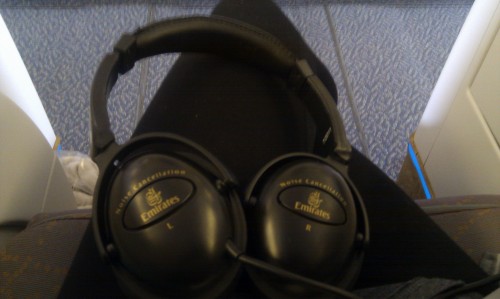 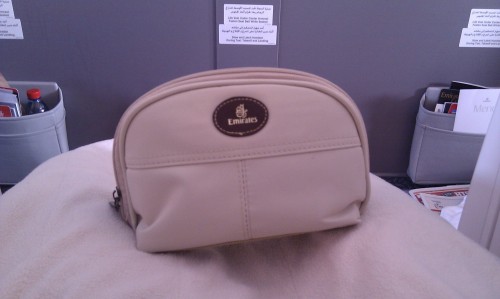 As soon as the flight took off I used the buttons to recline my seat a bit, and a member of cabin crew came around to take our drinks orders. As I sat there with a martini and some nibbles, for the first time I was feeling pretty ecstatic about taking a long-haul flight. I don’t mind flying, in fact I really enjoy it sometimes, but the journey to Australia is SO long. 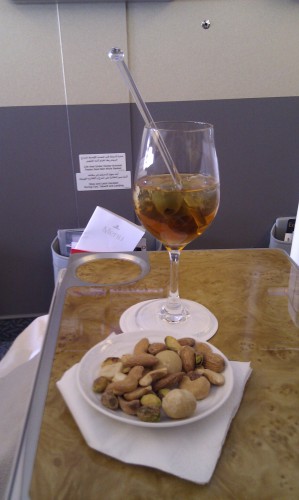 Instead of eating food from plastic cartons on a tiny meal tray, I had a huge table laid with linen, proper silverware, cute little salt and pepper shakers and a large glass of white wine. To start I had some yummy tiger prawns, an artichoke salad and some warm bread with oil and balsamic vinegar. For a main course I had sea bass in a lemon sauce with new potatoes, and then for dessert I had a selection of little desserts with a cup of Earl Grey tea. 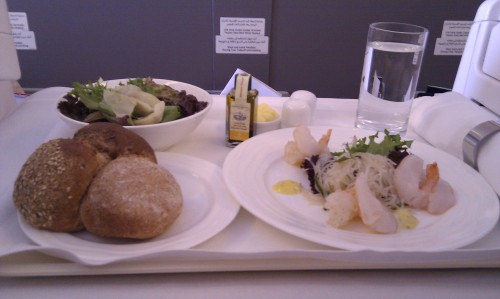 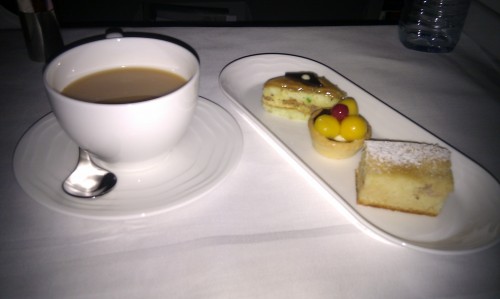 After that I was pretty tipsy by this point, so I put my seat into the flat bed position and had the best sleep I’ve ever had on a flight. By the time I woke up I had just enough time to watch the first half of “Chasing Madoff” and then it was pretty much time for landing.

My Business Class upgrade with Emirates even meant that I was able to fast-track through the Customs and quarantine area when I landed in Brisbane Airport.  They’re really funny with bringing food into Australia, so there’s usually quite a rigmarole having to have your bags scanned on the way in.

One thing’s for sure, I definitely arrived in Australia with a big grin on my face. So the moral of the story? Be late boarding the plane when the flight is oversold and you may get bumped to Business Class 🙂