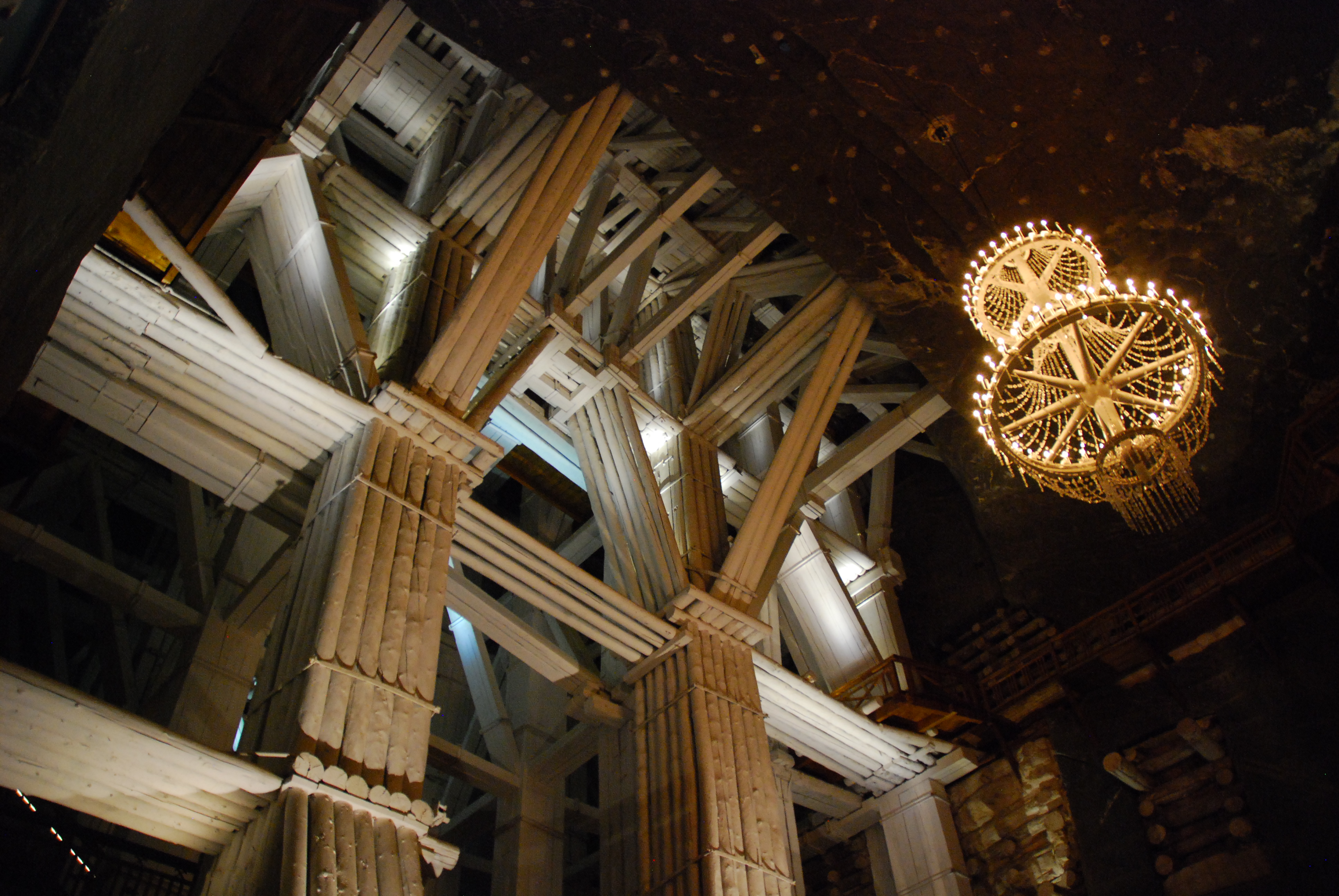 Wieliczka Salt Mine, which can be found 10km from Krakow, is one of Poland’s most popular tourist attractions, yet funnily I was unfamiliar with it before I arrived there.  In fact, the mine is quite estraordinary, and was inscribed in 1978 as one of the first 12 UNESCO World Heritage Sites. 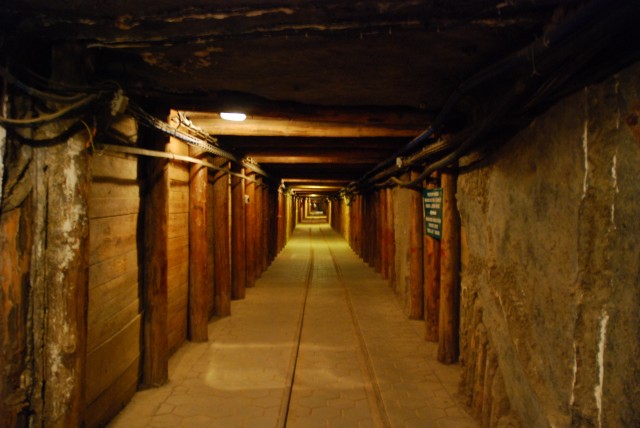 The salt mine is a complex of underground excavations consisting of nearly 2,400 chambers, covering a total length of 24km at levels ranging from 64 to 327 metres deep.

Built in the 13th century, the mine was the only mining site in the world functioning continuously since the Middle Ages. That was until 1996, when commercial mining was stopped due to the low value of salt and flooding problems. 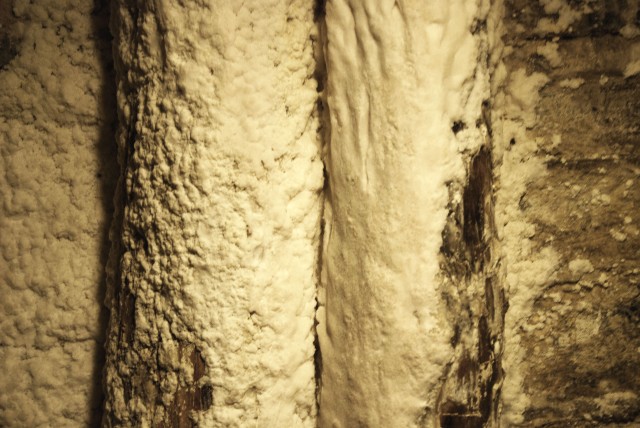 Wieliczka is now used as a venue for organised events such as concerts, conferences, business meetings, banquets, balls and wedding receptions. Due to the specific microclimate in the mine, there is also an Underground Rehabilitation and Treatment Centre 135m below ground where people with allergies, asthma or ailments of the respiratory system can receive treatment.

What’s so fascinating about this mine is that the miners didn’t just mine salt here. Generations of miners left a legacy of magnificent chambers, chapels, statues, and art work that you can marvel at and enjoy today.

At the start of the guided tour we climbed down a steep 380-step wooden staircase until we reached Level 1, which is 64 metres below ground level. I’m pleased to say we didn’t have to walk back up those 380 steps because there’s a 17th century elevator called the ‘Danilowicz Shaft’ that whisks you back up to the surface in 30 seconds! 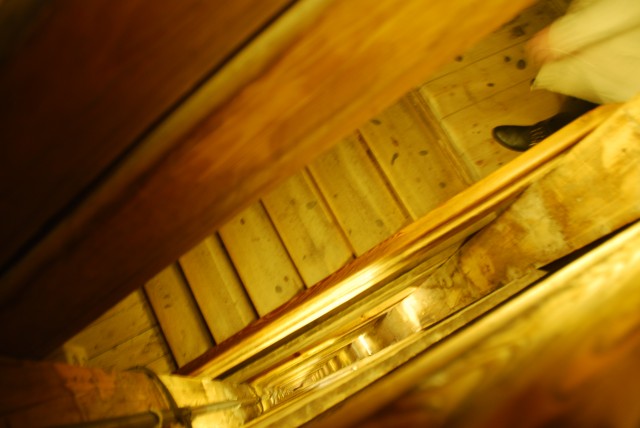 The tour took us through Levels 1 (64m deep) to 3 (135m deep), to see some of the mine’s most exquisite excavations. Walking through some of these incredible chambers, I felt like I was in a scene from Phantom of the Operah, or perhaps a Dracula movie! It’s almost like an entire city hidden underground.

Down here everything is made from salt: from the sculptures to the chandeliers. 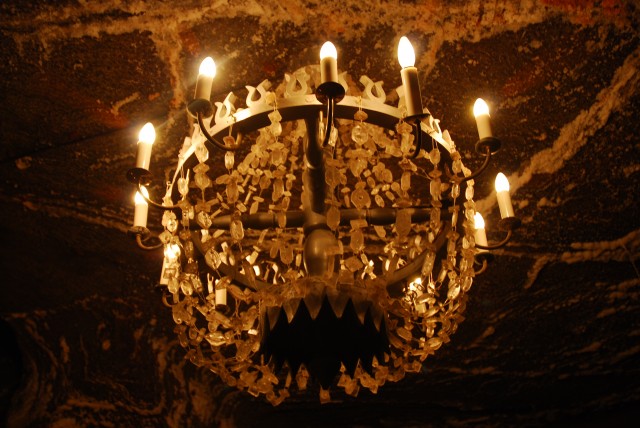 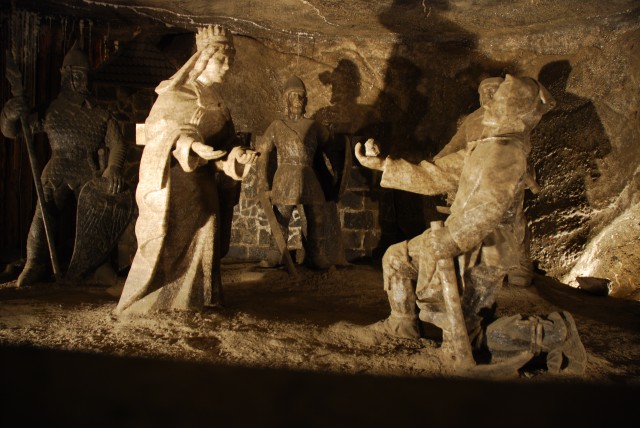 Since the miners were exposing themselves to danger working in the mine, they placed their health and wellbeing in the hands of the Almighty, the Holy Mother of God, and the holy patrons. There are several small chapels throughout the mine, including the Holy Cross Chapel, pictured below. This chapel was constructed as a votive offering for saving the mine from a catastrophic leak in the mid-19th century. 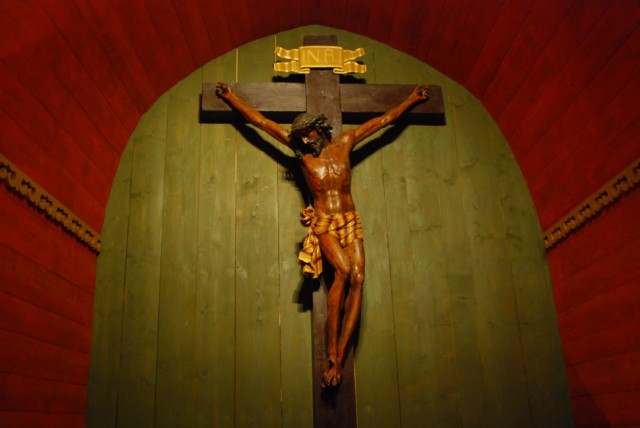 The pièce de résistance, the icing on the cake, is the Chapel of St.Kinga. Imagine being 101 metres underground and walking into an enormous Salt Cathedral with chandeliers hanging dramatically from the ceiling! Because of the nature of the chapel, it is said to have the best acoustics in Europe! 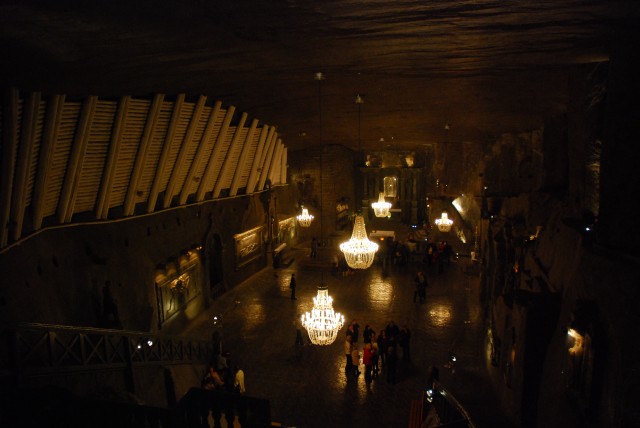 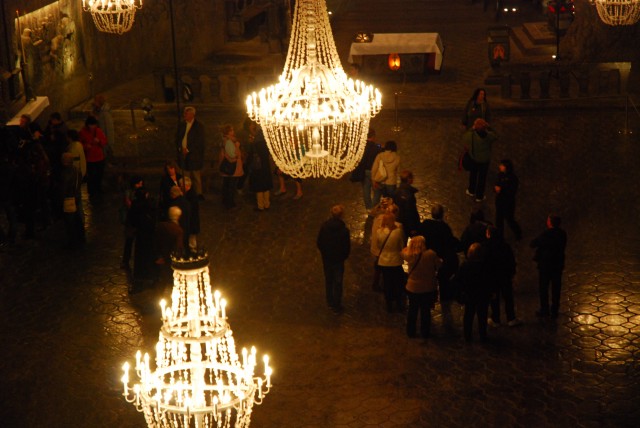 The are lots of salt sculptures and bas-reliefs inside St.Kinga’s Chapel, including this incredible depiction of The Last Supper. If you walk away from it, it appears to get deeper and deeper. 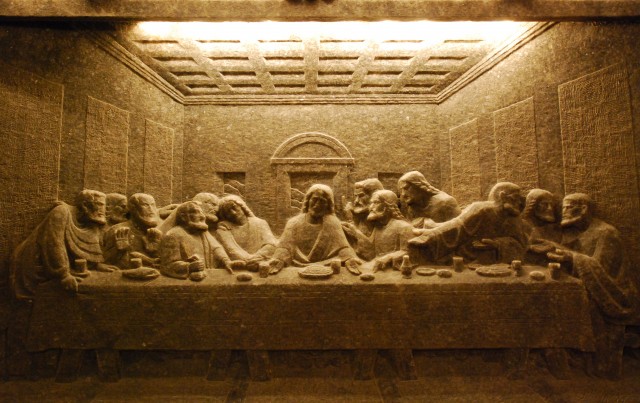 Everything you see in here was carved entirely out of salt by very talented, self-taught miners. I can’t even begin to imagine the amount of painstaking work must have been put into making these incredible works of art. 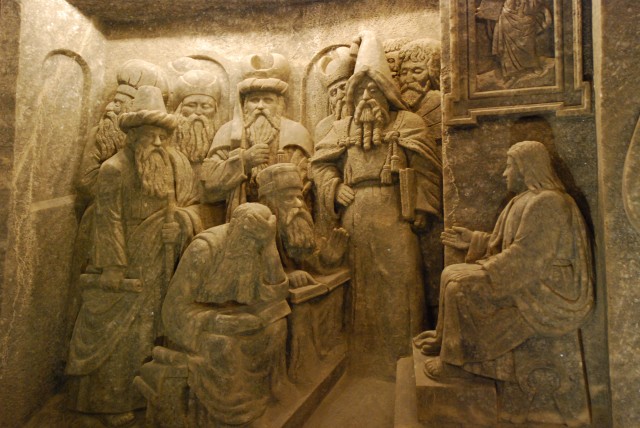 It’s not just all about sculptures though- there are also underground brine lakes. Below is a picture of the Erazm Bar?cz Chamber which features a brine lake 9 metres deep. 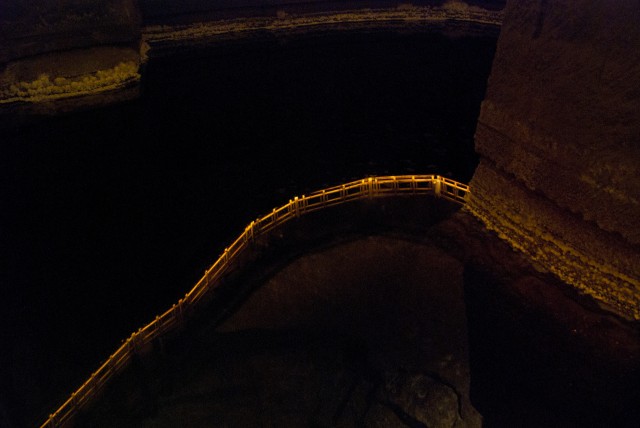 Another very impressive chamber is the Michalowice Chamber, which was worked between the late 17th century and mid-18th century in a vertical block of green salt. At the turn of the 20th century, an impressive wooden casing was constructed in the excavation. 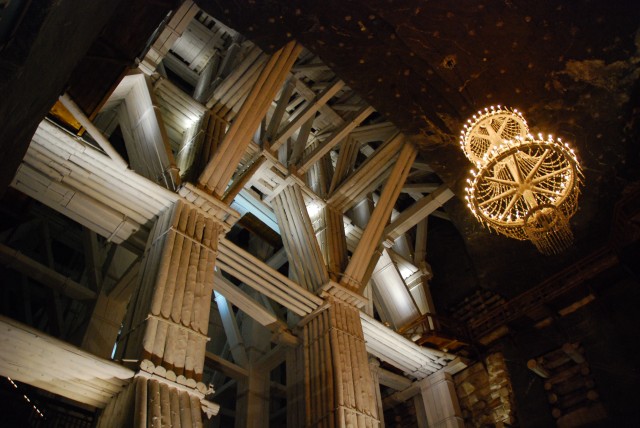 Next we came to the pretty Jozef Pilsudski grotto, which is filled with brine and features a 19th-century figure of Saint John Nepomucene, who was drowned in the Vltava River. Because of the nature of his death, he is considered a protector against floods. 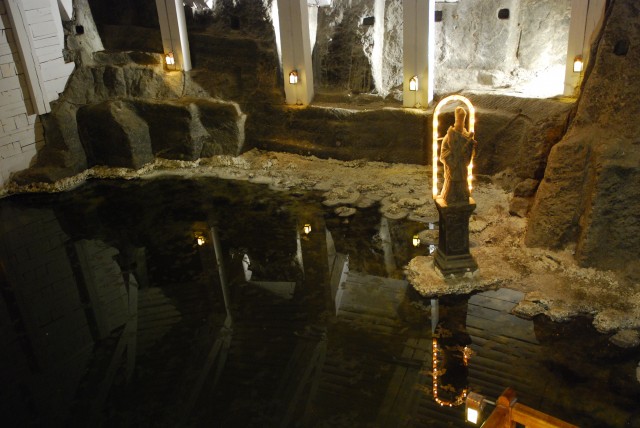 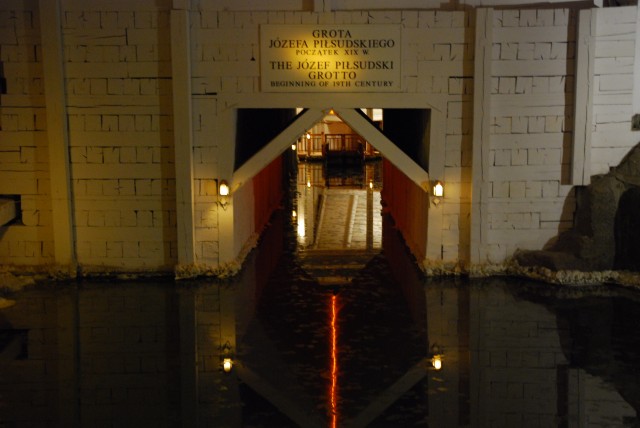 Numerous celebrities have visited the salt mine, including Johann Wolfgang van Goethe, Bill Clinton, Nicolaus Copernicus and Pope Jean Paul II, who is pictured in this school photo below from a visit to the mine in 1930. There is also a huge life-sized salt statue of Pope Jean Paul inside the Chapel of St.Kinga. 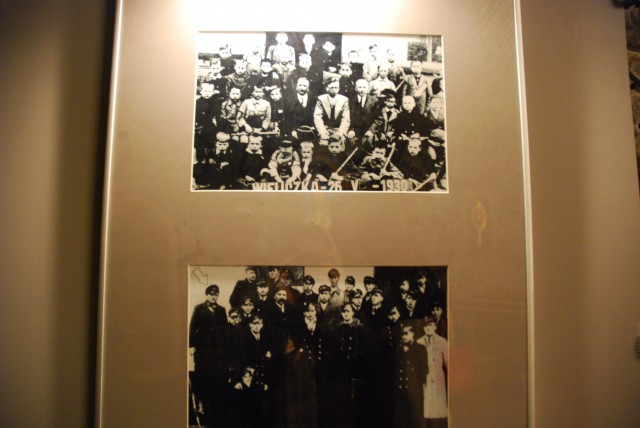 Having done the tour of the salt mine, I can now completely understand why it was inscribed on the first World Heritage list. This mystical underground world is the result of centuries of hard work and labour from very skilled miners, and really is a sight to behold. 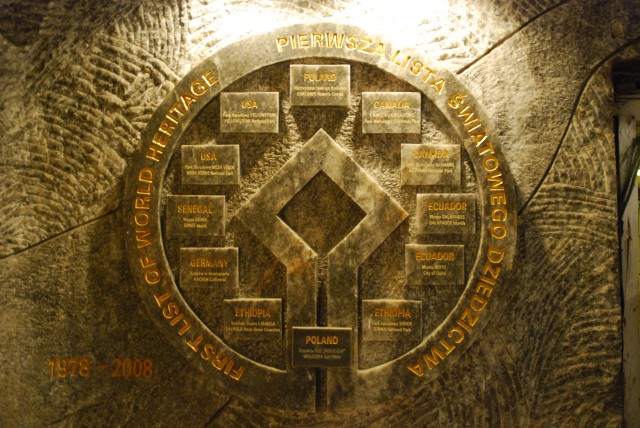 Getting to Wieliczka Salt Mine

Wieliczka is 10km outside of Krakow, and you can take either a commuter train, bus line no. 304 or a mini-van from Krakow Main Railway Station.