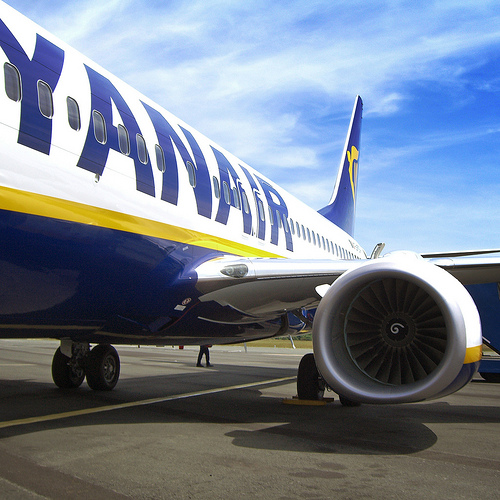 I’ll tell you a little story about my trip on Ryanair if you haven’t heard enough nightmare stuff about them already.

I flew from Bali to London for £230. Yes that’s right, I flew half way across the world, all for two hundred and thirty pounds. If your jaw has dropped in disbelief, this is how I did it. I booked a flight with Air Asia which cost me £50 from Bali to Kuala Lumpur and then I booked a flight with STA Travel from Kuala Lumpur to London for £180 using my International Youth Traveller Card because I’m under 26.

I’d decided that rather than set foot back home in the UK, I would fly straight to Portugal from London Stansted, but the cheapest flight available was on Ryanair. Oh what a mistake I’d made.

Not only did it turn out to be pricey, it was MORE expensive than my trip from Bali to London. Yes my flight from London to Faro was pricier than flying half way across the world. The flight itself was £90 but my bags cost me more.

When I booked my ticket I saw the baggage allowance had gone down from 20kg to 15kg but thought I would just pay the excess baggage, how bad could it be? I had the option to add an extra bag online at the cost of something like £30 but thought I might as well pay the extra kilos instead of going out and buying another backpack.

Two words. Fatal error. Don’t mess with Ryanair, you’ll never win. I worked on my laptop overnight and about an hour and a half before my flight, I went to check-in. It went something like this:

Mean check-in lady with stern face: “Your bag is overweight by 8 kilos, would you like to take something out?”

Me: Errrm no. Not only is my hand luggage full, there’s nothing in there that weighs 8 kilos I can just take out.

Mean check-in lady with stern face: “You can do that, an extra bag is £80”

Mean check-in lady with stern face: “That was online, 2 hours before the flight it goes up to £80”

Me: Where is the sign saying that, I’ve been sat in this airport all night and nowhere does it say that!!!

Mean check-in lady with stern face: “You should have read the terms and conditions.”

I went off in a huff and spent £35 on the cheapest holdall I could find in the Samsonite store to carry my stuff, tipped half of it into the bag and then went back to the desk.

She gave me a ticket to go and pay for my ridiculously expensive bag at a special desk and I stood in the queue patiently realising that it was now uncomfortably close to my boarding time after all this fuss. I couldn’t help but get anxious as others wasted time in the queue in front of me.

Once I’d eventually paid my excess baggage fees, I returned to the check-in desk where mean check-in lady said to me (again with stern face) “You’re about to miss your flight you know.”

A man at security took pity on me and helped me fast-track through, saying to me “You should’ve booked with Easyjet.  They’re much better with their baggage allowances. Never book Ryanair.” He was right, if I’d booked Easyjet I would’ve saved myself a hell of a lot of money, even if the flight was a bit dearer.

Then I made fatal mistake number 2. I legged it through the terminal to make it to my gate, and arrived just in time to board. The unfortunate thing was I still had my laptop in my hand after taking it out for security. There was no-one around, just me left and the woman standing between me and the aircraft.

Boarding lady: “Erm, excuse me but you’re not allowed to board the aircraft with more than one item in your hand. Can you put that inside your hand luggage please.”

I bent down to put my laptop in my hand luggage and she watched me with her beady eyes. When I opened up my hand luggage she saw that I had not only a laptop, but lots of heavy camera equipment.

Boarding lady: Can I just weigh that please?

I put it on the scales and it was 1kg over the 10kg weight allowance. Fuck.

At this point, after 3 long days of transit, and with hardly any money left, I burst into tears. Silly I know, but it all just got a bit much. What frustrated me most was these were the rules, and I had not played by them, but there was no-one around to see her do that, 1kg could have slipped through the net and I’d already given Ryanair an extra £80.

Boarding Lady: “There’s no use crying. Stop crying and pay the fee or the plane will go without you.”

I’m convinced that Ryanair representatives go to some army training boot camp and when they go for interview, they have a “how mean can you be” test. I imagine they pelt tomatoes at them and hurl insults to see who will crack before offering anyone a job.

I know Ryanair would say something like “You should have read the terms and conditions” and I know many of you would say I should have played by the rules. But will there come a day when everyone says enough is enough? It was announced that Ryanair would start charging for use of the toilets onboard but is this taking it a bit too far?

The reality is, when booking a low cost flight, these airlines charge for taxes and bags, plus credit card fees. By the time you’ve paid for all these add-ons, you might as well have flown with an airline like British Airways.

48 thoughts on “Don’t mess with Ryanair, How My Bags Cost me the price of a flight from Bali to London”