19 Aug The Most Beautiful Train Ride I’ve Ever Taken

While I don’t have an official bucket list, experiencing an Amtrak train journey has definitely been on to-do list for quite a while. 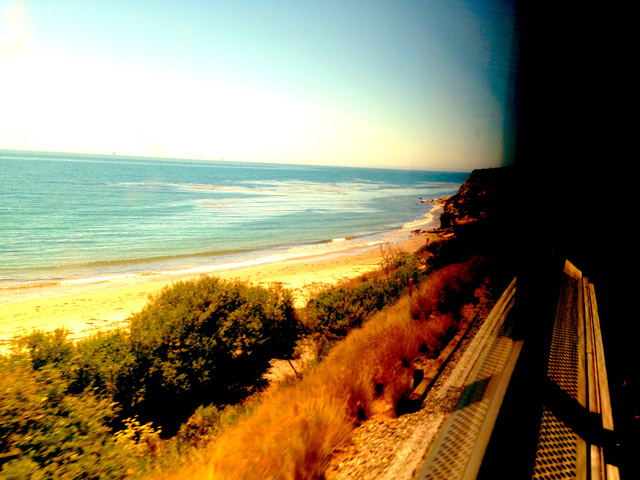 The long-distance Amtrak train routes across the USA offer the chance to see some of the most breathtaking scenery in the world, so it’s definitely something I wanted to try at least once in my lifetime.

I finally got to ride my first Amtrak train a few weeks ago when traveling between Santa Barbara and San Francisco.

I had been staying with my friend Lindsay in Ojai- a picturesque town surrounded by hills and mountains in Ventura Country. Lindsay and I met in Bali several years ago, so I decided to go visit her for a few weeks and see some more of California!

Her closest stations are Santa Barbara or Ventura, so I was searching for the best, and most economical option to get to my next destination- The City by the Bay.

When I looked at getting to San Francisco, I had a few options:

1) Flying: Get Lindsay to drop me off at the airport in Los Angeles and fly to San Fran (this would set me back at least $200 at the last minute and would involve going back down to LA)

2) Bus: Take the greyhound from Santa Barbara to San Francisco (I had heard some pretty rough stories about Greyhound rides but cheap at $43)

3) Megabus: Have Lindsay drop me off in LA so I could take the Megabus to San Francisco. (The cheapest option at $34 but involved going back down to LA)

4) Car: Rent a car and drive up the coast. (This is the most flexible option and you can technically drive up the coast in a day, but I would have wanted to do this with someone else and make some stops at Big Sur etc. I also had to take into consideration the cost of fuel as well as the actual cost of renting the car)

4) Train: Ride the Amtrak from Santa Barbara to San Francisco. ($82 but incredible scenery and more enjoyable experience. It actually would have been $52 but the prices went up at the last minute!)

I ended up purchasing a ticket on the Amtrak Coast Starlight train which starts in Los Angeles and travels right up the West Coast to Seattle. The train is a bi-level superliner so it has two floors; most people choose the top floor as it offers better views.

My train journey began at Santa Barbara train station- a very cute station only a few blocks away from the beaches and promenades. I had the option to check-in my big suitcase, but since I had to catch a bus connection straight away from Oakland to San Francisco, that wouldn’t give me enough time to retrieve my checked baggage. 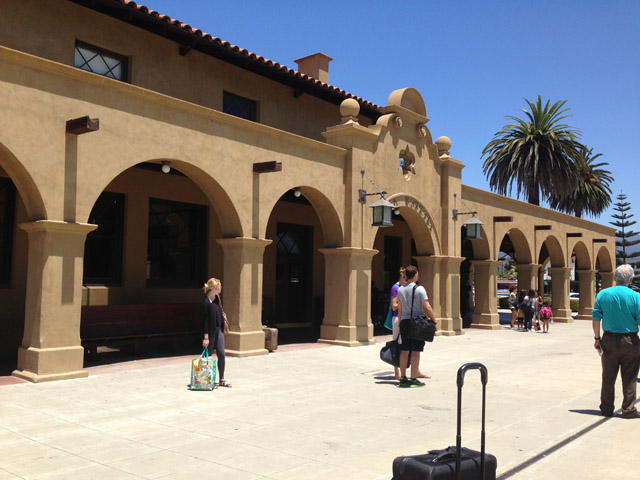 You are allowed to take 2 carry-on bags on the train — 50 lbs. — 28″ x 22″ x 14″ each. I was a bit worried that my bag was slightly too big by an inch but I had no problems getting on the train and there were large baggage areas on the lower level. That was great as it meant there was no need to drag my bags up any stairs or struggle to put them in overhead compartments! 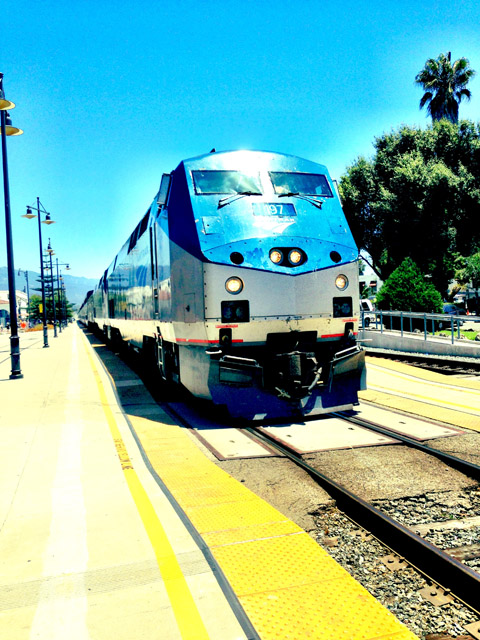 The Coast Starlight hugs the coastline towards San Louis Obispo and then eventually heads inland for good. I disembarked the train at Oakland where I had to catch a short 55 minute bus connection to San Francisco, but the train continues all the way north to Seattle.

The Coast Starlight is without a doubt the most beautiful train journey I have taken.

The scenery along this route is incredible! Honestly I felt like I was ON the ocean as we passed some of the most beautiful beaches in the world. A few of them were so untouched they didn’t have a single person on them. 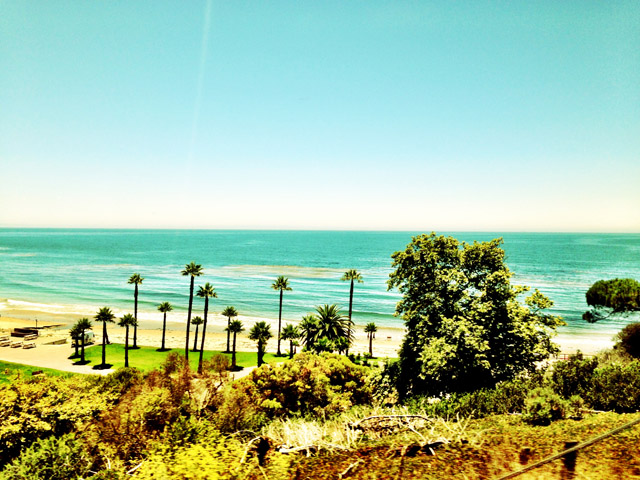 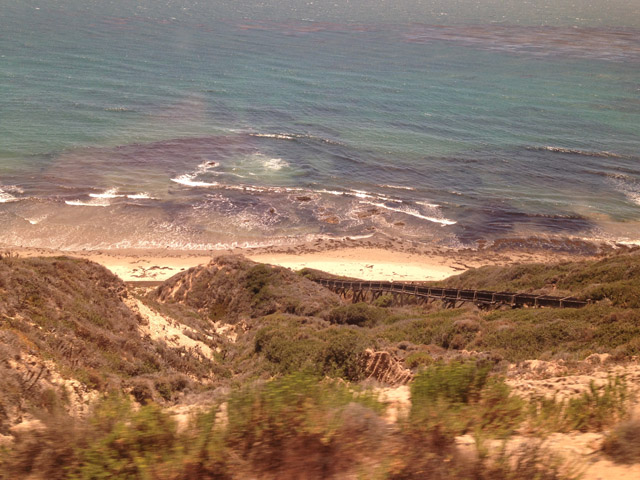 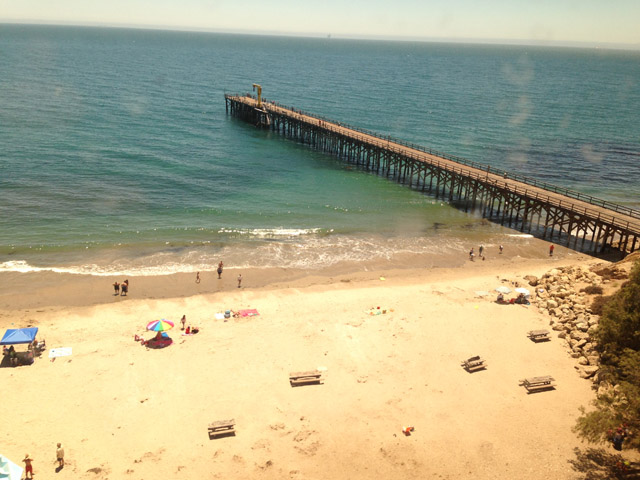 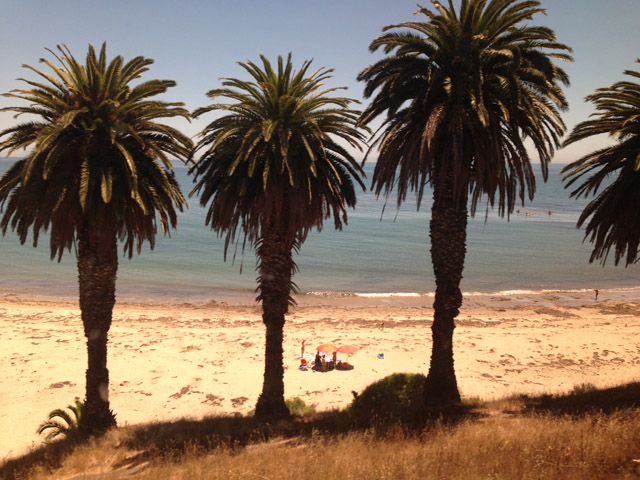 I couldn’t stop looking out of the window and taking pictures! If you want an even better view you can walk to the Viewing Car which has floor-to-ceiling windows and seats facing outwards. The seats fill up quickly but usually people will get up and leave so if you wait around you can get a spot. 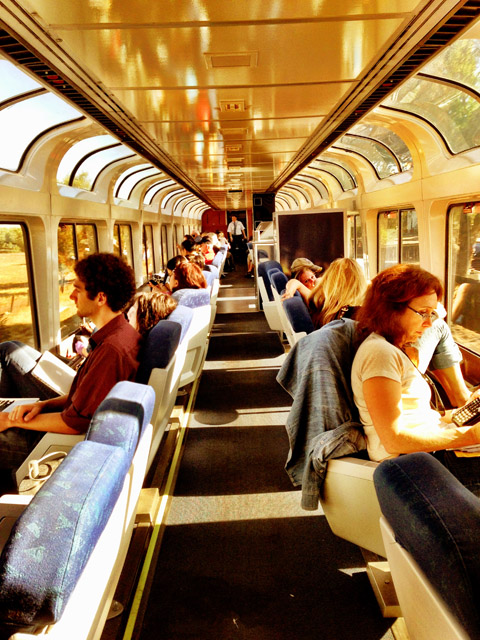 During the train journey a gentleman came around to take reservations for the Dining Car, which serves fresh meals on real china and table linens. I had the option to choose a time slot and then when my time was called on the overhead speaker, I was able to head on over to the Dining Car. 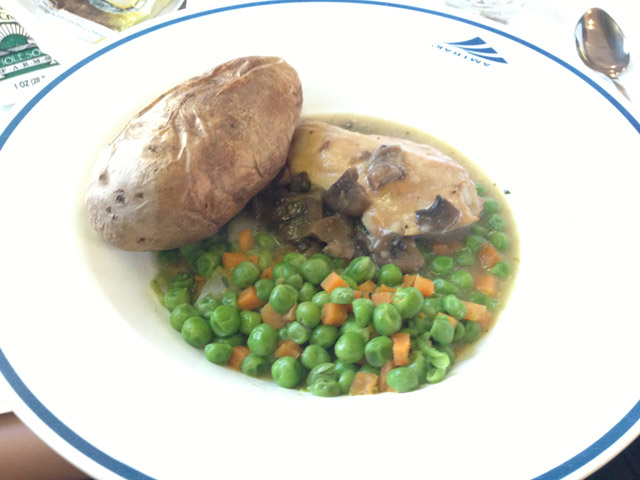 I ordered the “healthy option” for dinner which was chicken with marsala mushroom sauce and a vegetable medley. It was OK but pricey at $16.75. The steak looked pretty good but that was $25 and I wasn’t feeling like splashing out that much!

The seats on the train were very roomy, with 2 plug sockets next to the window for charging electronics. I was surprised at the amount of legroom and the seat reclined pretty far, so I was able to make myself comfortable! 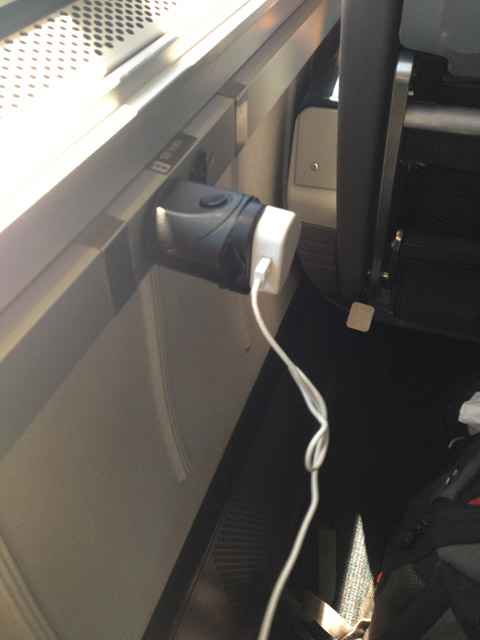 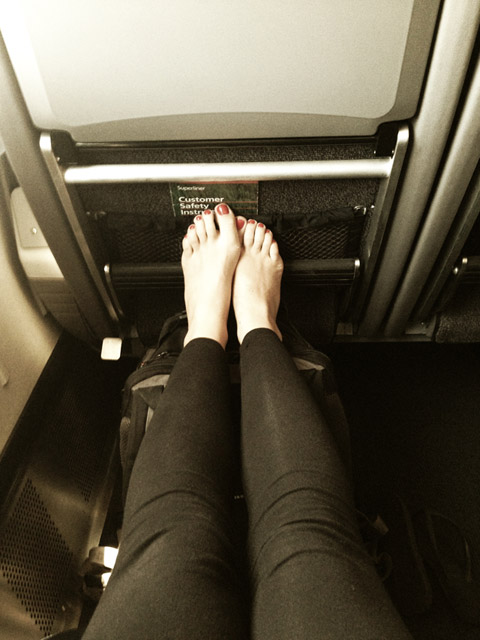 I was actually issued an aisle seat but since the train was half-empty I asked a member of staff if I could sit in one of the empty window seats while the train made its way along the coastline. He said it was fine but I would have to move if anyone else arrived, so I got a few hours in the window before I had to move back to my original seat. 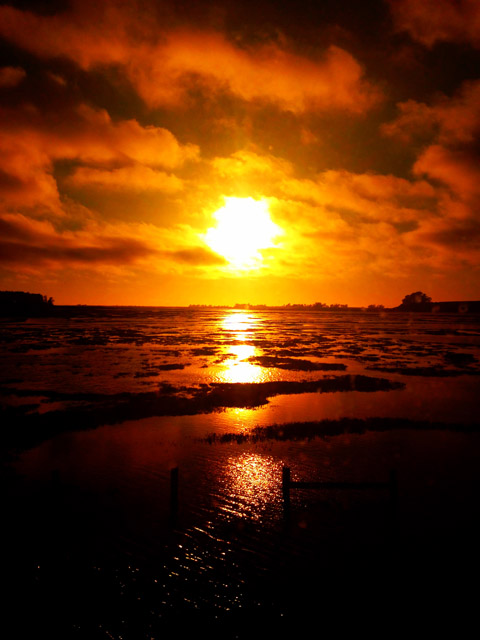 When I disembarked the train in Oakland late at night it was pretty cold compared to the warmth of southern California! The bus was supposed to take around 55 minutes but in fact the journey was a lot shorter, so I was in central San Francisco in no time.

The whole journey was leisurely and enjoyable, so I would have no problem taking an Amtrak train journey again, although I can’t imagine taking a 34 hour journey all the way to Seattle like the girl sitting next to me. My 10 hours seemed like nothing in comparison!

If you’re thinking about taking the Amtrak train all the way to the Pacific Northwest, check out their guide on all the fun things to do in Seattle.

St Louis is also a wonderful place to visit.