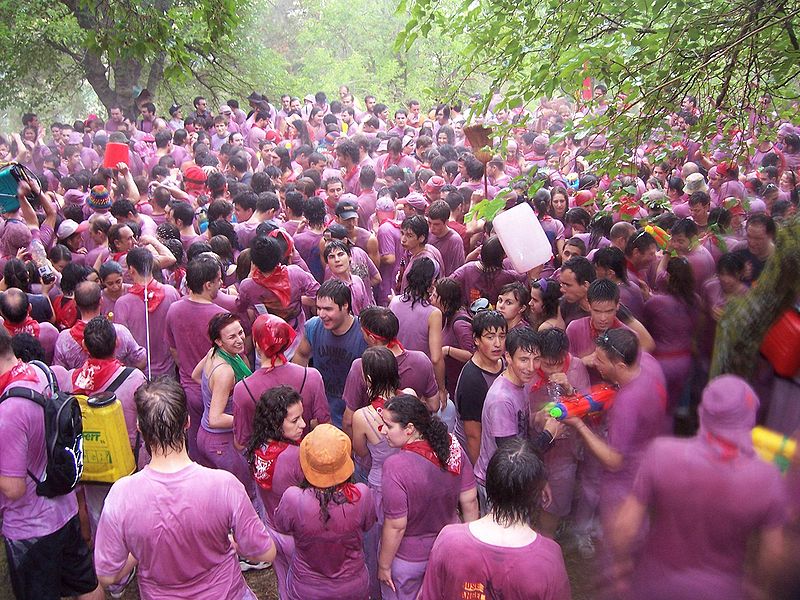 Spanish people know how to party, and it seems like there’s a festival every 5 minutes! Festivals in Spain are a little bit crazy, a little bit nuts, but that’s why we love them…because they’re so much fun!

If you’re visiting Spain on holiday you should definitely try to incorporate one of these 5 crazy festivals into your trip: 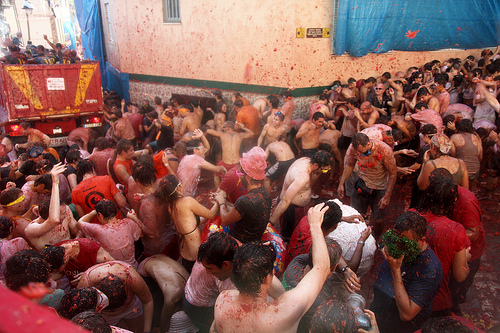 Every year thousands of tourists from all over the world head to Brunol near Valencia to take part in La Tomatina, Spain’s tomato throwing festival. This one day event is purely for fun, and involves participants throwing over-ripe tomatoes at each other in the streets. La Tomatina begins at 11am, when people scramble and fight to get to the top of a greasy pole to retrieve a ham. Only when the ham has been pulled down can the fighting begin. Many trucks carrying over-ripe tomatoes from Extremedura make their way into town, and the fighting begins with the signal of a canon fire. After that it’s a massive free-for-all, and the streets are covered in a sea of tomato pulp. Since the tomatoes are acidic, everyone wears goggles, and the rule is that the tomatoes must be squished before throwing. After a couple of hours, another cannon is fired, signalling the end of the fight, and then the cleanup operation begins! Fire trucks hose the streets down with water, and people head to the river to wash themselves off.

2. Running of the Bulls- The Crazy Bull Running Festival 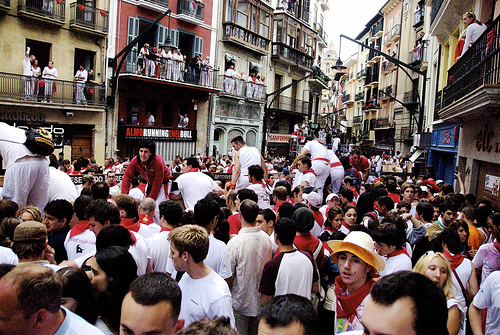 It seems slightly insane to go anywhere near a charging bull, but every year, thousands of brave festival-goers run with the bulls in Pamplona. Everyone dresses up in white pants, a white shirt, a red scarf around their neck, and a red sash around their waist. Early in the morning the runners gather in the street and seek out their position to run with the bulls. At 8am a rocket goes off to signal that the six bulls and six steers have been let out of their corral, and then a second goes off to signal that all the bulls are loose and running. The bulls charge down the streets towards the bullring along an 825m stretch, and everyone goes wild. A third rocket is set off once all the bulls have entered the bullring and the fourth, and final, rocket means that the bulls are now in the bullpen and the bullrun has finished. Every year people get injured, not just because of the bulls, but also through falling and drink-related injuries! 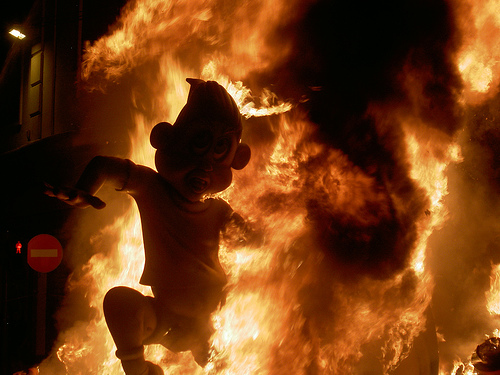 Las Fallas is a pyromaniac’s dream- a crazy five-day festival of blazing fires, fireworks, explosions, music and burning paper mache sculptures. Neighbourhood organizations spend the months leading up to the Festival handcrafting giant lifelike puppets called ‘ninots’, which are placed at key points throughout the city for the beginning of the festival. At exactly midnight on the final day, March 19th, the street lights are turned off and all but one of these bizarre sculptures are set alight and allowed to burn. The days during Las Fallas are filled with exploding firecrackers, and the highlight is the daily mascleta at 2pm- a rhythmic firework show that sounds like music. 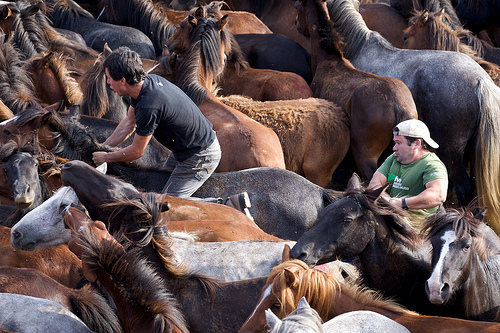 The aim of the game at Rapa das Bestas is to round up untamed horses in a corral, wrestle them to the ground and then trim their tails and manes and brand the foals. This is a test of man vs beast, and the participants are allowed to use nothing but their bare hands. At 7am on the Saturday morning a mass is held, and then the wild horses that live in the mountains of the the Galicia region are rounded up and brought down to the village. Both tourists and locals can be involved in rounding up the horses, but only skilled fighters (aloitadores) are allowed to wrestle them, so don’t get any ideas about joining in! Inside the stone amphitheatre, men grapple with the sea of bucking and galloping horses, often barely hanging on by their fingertips. As with most Spanish festivals, the days activities are followed by more celebrations and a night of partying. On the final day, the horses are sent back to the mountains, where they run free for the rest of the year. The purpose of this 400-year-old festival is to maintain the hygiene of the horses and track the foals, but some consider the Festival to be cruel. I’ll let you decide. 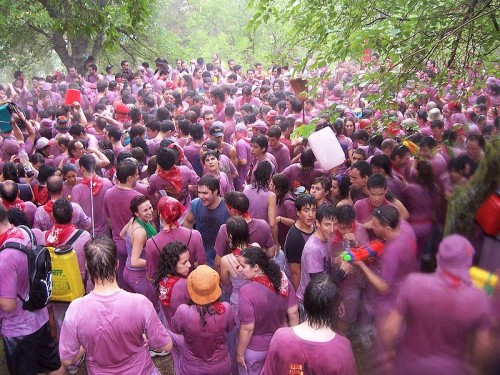 Ever felt like chucking a glass of wine over someone? Well at Haro Wine Festival you get to hurl litres and litres of the stuff at each other! At 7am people of all ages gather in the street dressed in white shirts and red scarves, carrying containers of all shapes and sizes to be filled with red wine. The mayor leads the procession on horseback through the town to the Cliffs of Bilibio, where a mass is held near where I stayed in my “ hoteles en bacalar“. Then the battle commences, and the crowds start tossing buckets of wine until everyone is soaking wet and all you can see is a sea of pink T-shirts. Your weapon of choice can be anything from a dustbin to a water pistol, the choice is yours and everyone is fair game. An estimated 50,000 litres of wine are used in this event- just hope it isn’t the good stuff!