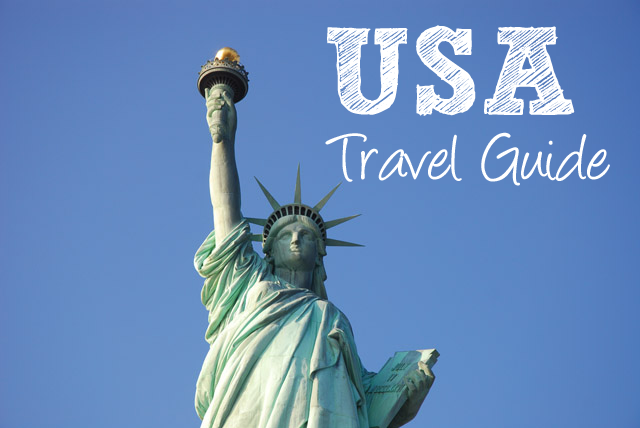 Made up of 50 states, the USA is a vast land area and each state feels like it could be a different country. No wonder many US citizens have never travelled outside of North America- there’s just so much to see and do. One minute you can be sightseeing in the cosmopolitan cities of New York, Los Angeles or San Francisco, the next you can be hiking through National Parks or gazing out over the Grand Canyon. I personally love travelling around the United States and I often go to visit American friends I have met overseas.

Since the US is so huge, most foreigners visit on shorter trips, maybe exploring a single state or one or two cities. Americans travel by car, so if you aren’t driving or flying, it can be a difficult country to get around for the budget traveller. Still, it can be done, and I have travelled solo through the US using a combination of bus, plane and Amtrak train. The ultimate experience though, is the Great American Road Trip, so if you have the chance to rent a car and hit the open road- do it.

The thing that is so refreshing for me is the positivity of the people. Generally I have found Americans to be very friendly, very smiley and intrigued by foreigners. Some people might think it a bit cheesy, but I love this positive attitude.

New York at Christmas: 10 Festive Things To Do in New York City

10 Fun Things To Do in Chicago

Broke-Ass in Los Angeles: How to do LA on a Budget

Seeing Los Angeles Without A Car: What You Need to Know

Broke-Ass Vegas: How to Do Las Vegas on the Cheap

10 Fun Things To Do in Portland, Oregon

Most people in the US either fly or drive when travelling around the country. As a tourist you could rent a car and plan a road trip, but remember that you will be charged a drop-off fee for returning in a different location. In the US they drive on the right hand side of the road and most cars are automatic; something to bear in mind if you’re used to driving a manual car.

If you choose to fly then I highly recommend looking on Skyscanner for the cheapest deals. I also love using Priceline, which allows you to bid on flights.

For backpackers travelling around the USA on a shoestring budget, it’s certainly not the easiest country to get round. However the Megabus network is quickly expanding and offers fares as low as $1. I used the Megabus in 2012 to travel from Chicago to Memphis, Memphis to Atlanta, and Atlanta to New Orleans. I also used it again in 2013 on a bus journey from Dallas to Austin. Your other option is the Greyhound, but I have heard some pretty sketchy stories about these bus journeys.

Alternatively you can travel the USA by Amtrak train. The Amtrak train is much more expensive than the bus, but it’s an experience in itself. You’ll get to experience some of the world’s greatest train journeys and see some incredible scenery. So far I’ve taken just one Amtrak ride, from Santa Barbara in California to San Francisco and I wrote about it being the most beautiful train ride I’ve ever taken.

Hostels aren’t a big thing in the US, but you will find some good hostels in the major cities. My favourite hostels in America are:

I stayed in a couple of dodgy hostels in Denver and Atlanta, but I think the hostel scene is gradually growing throughout the states.

Hotels in cities like Los Angeles and New York can be expensive during peak tourist periods, but hotels in Las Vegas are incredibly cheap because they make money on gambling, drinks, food and other things. I like to use Expedia, Priceline or Booking.com to get some good deals on hotels. The ‘secret’ deals-where you don’t know the name of the hotel but you know the rough area- can save you a lot of money.

Air BnB is also another great accommodation option if you’re looking for an affordable home-away-from-home. People rent out their spare rooms or apartments on this site and it can often work out cheaper than a hotel.

If you’re on a serious budget you can try Couchsurfing, a movement that actually originated in America.

Food is quite reasonably priced in the US, although it depends where you go; you can find anything from snack stalls to high-end celebrity restaurants. If you wish to eat on a budget, your best bet is fast food joints or cheap American diners like Dennys. Mexican food tends to be fairly inexpensive and you can get tacos for just a couple of dollars. Take advantage of any Happy Hour offers and Sunday Brunch with unlimited Mimosas!

I find portions to be rather large in the states, but it is quite normal to request a doggy bag so you can take home what you don’t finish- something we rarely ever do in the UK. The good thing about these large portions is you can get two meals out of it!

If you like healthy food then Wholefoods will be your Disneyland. This store is bursting with fresh produce, salads, sushi and fresh juices- I could spend all day in here. Big supermarket chains in the US also include Trader Joe’s, Walgreens and Walmart to name just a few.

You can really find any kind of restaurant you like in the US- sushi, Mexican, Italian, Chinese…whatever your taste buds desire.

When I first went to America I was a bit confused about tipping etiquette, but soon got the hang of it. I’m from a country where we’re not obliged to tip at all, but if you don’t tip the bartender when you order a drink at the bar in the US, you simply won’t be served again. As a general rule, servers in restaurants are 20% of the bill and bartenders are tipped $1 per drink.