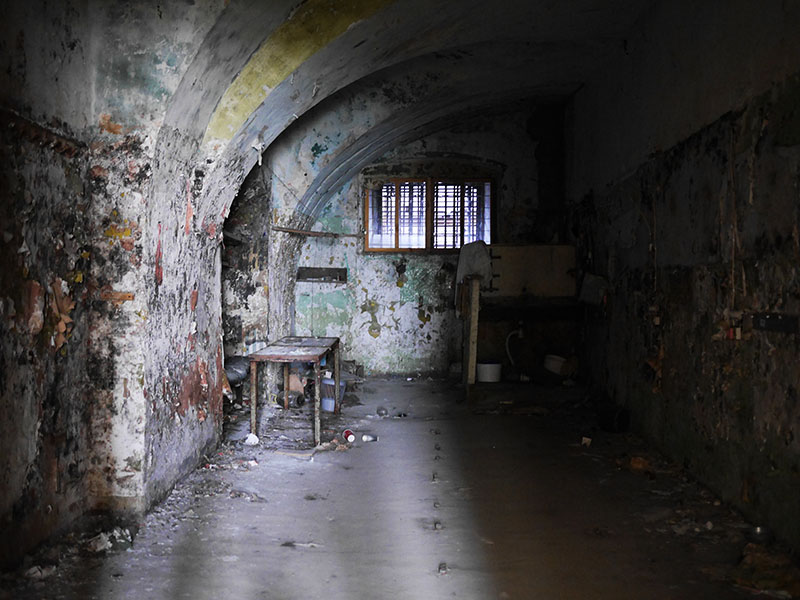 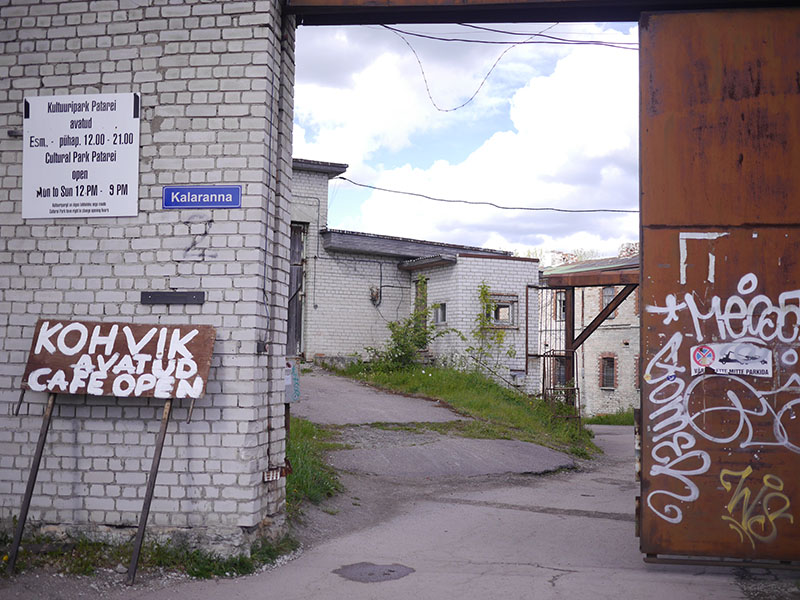 Had I not got chatting to some fellow tourists in DM Baar, I would never have known about Tallinn’s creepiest and most fascinating attraction, the abandoned Soviet prison.

On my first night in the city I dropped by the Depeche Mode-themed bar and when I overheard three girls with Manchester accents, I quickly struck up a conversation. They mentioned they had visited the prison earlier that day, even scrolling through their photos to give me an idea of what it was like. One of the girls said she actually had to stay outside because she found it so depressing but the others said they found it rather fascinating. I was intrigued and needed to see for myself.

The prison is called Patarei vanglamuuseum, in English, “the battery”. The official website refers to the prison as a ‘cultural park’ although I’m not entirely sure what that means. It reads:

“This unique 19th century example of Tallinn’s top architecture has now in the 21st century changed from a longtime symbol of repressions to a favorite place for residents of the nation’s capital and visitors, a multifunctional place to spend free time.”

A multifunctional place to spend free time…OK. Ironic since it was used to incarcerate people. I’m not sure that you’d want to spend more time than necessary in this eery, creepy building. 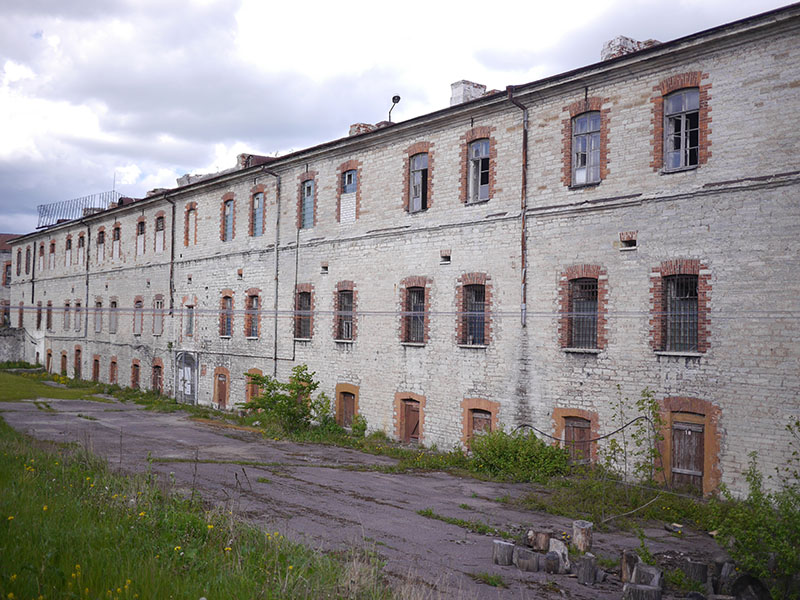 From what I’ve gathered, Tsar Nicholas I of Russia ordered the sea fortress to be built in 1828 and it was finally completed in 1840. At one time it functioned as a barracks and from 1920 it functioned as a prison, until it was abandoned in 2004, the year Estonia joined the EU.

I easily got the directions from Google Maps and made my way there with two girls I had just met on my Topdeck tour. As we left the picturesque streets of the Old Town, I was glad I had some people for company as I didn’t feel 100% sure I would know how to find it. When we eventually came to the red pin on Google Maps, all we found was a closed iron gate. Some Estonian men were hanging about next to their car and just uttered the word ‘closed’ so I made a phone call to the telephone number on the website. The man who answered told me it was definitely open, so we realised we must have come around the wrong side.

Walking Around an Abandoned Prison

When we walked around the corner and eventually found the entrance to the prison, there was a small kiosk manned by an Estonian lady who took our €3 entrance fee and gave us a ticket.

Then we had free rein to go wherever we liked. I’ve been to a fair few ‘dark tourism’ sites such as Auschwitz, the Hanoi Hilton and the S-21 prison in Cambodia but the main difference is this prison is much more recent. There are no audio guides, there are no signs with information, there’s no museum or roped-off areas. Just an abandoned building that looks like it’s been ransacked. 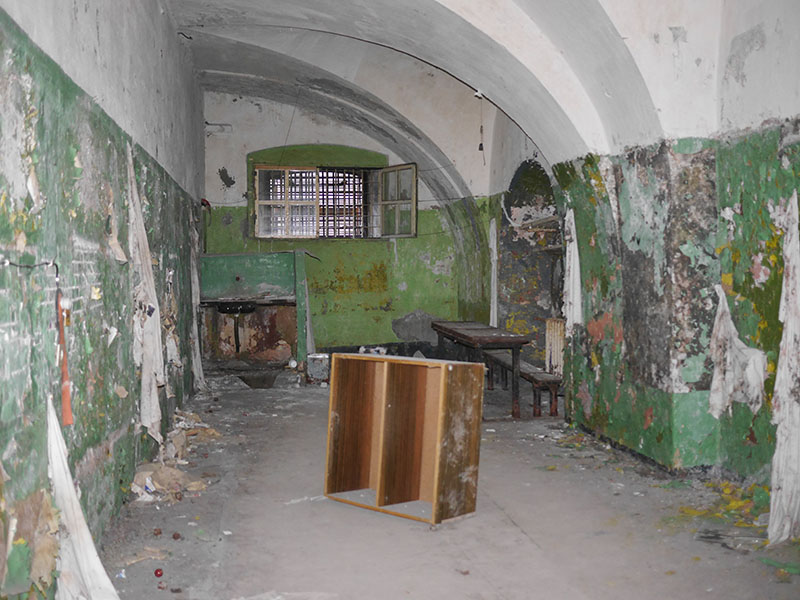 Since the prison was used by the KGB in Soviet times, it’s pretty clear that bad, sinister stuff happened here. As I walked along the corridors of the second floor by myself and peered through some iron bars into a darkened corridor, the sudden noise of a window banging shut frightened me out of my skin. The fact that it was an extremely blustery, windy and rainy day really added to the feeling of gloom, so I quickly ran to catch up with my friends. 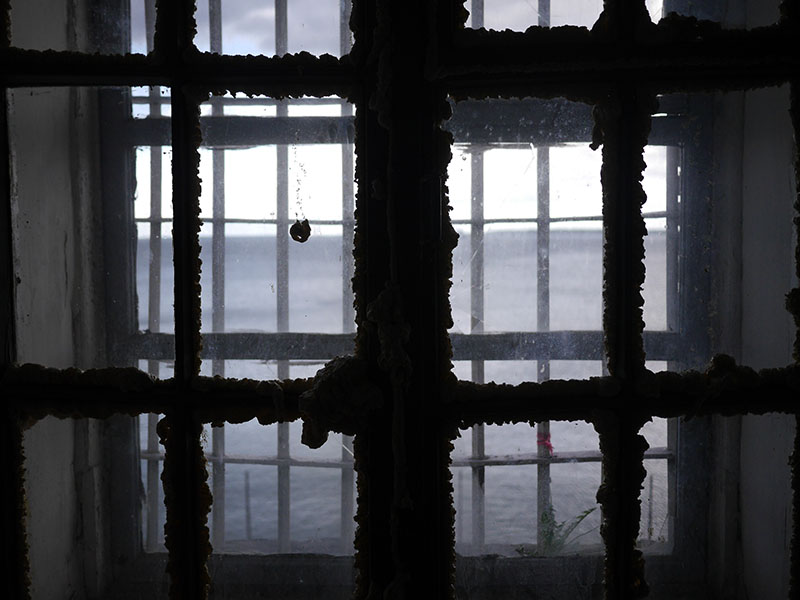 It would definitely make a great setting for a horror movie.

Some of the rooms are pitch black with no lights, so the only way to see what’s inside is to shine a torch or use the flash of your camera and hope a zombie doesn’t come charging towards you. If it’s this scary in the day, it must be pretty terrifying at night and if you believe in ghosts, I’m sure the prison is riddled with them.

This hospital room was the creepiest, with apparatus and equipment that looked like it belonged to a creepy scientist conducting experiments. In fact I’m sure experiments probably happened here too. 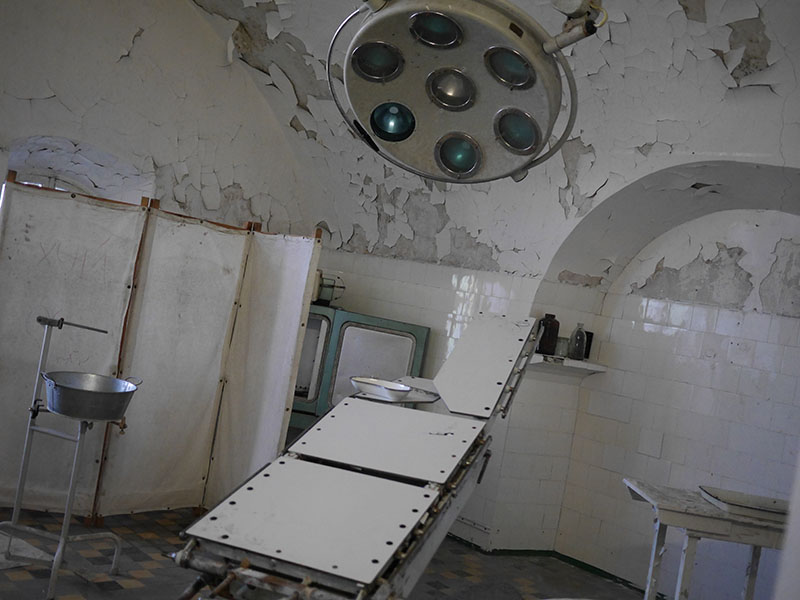 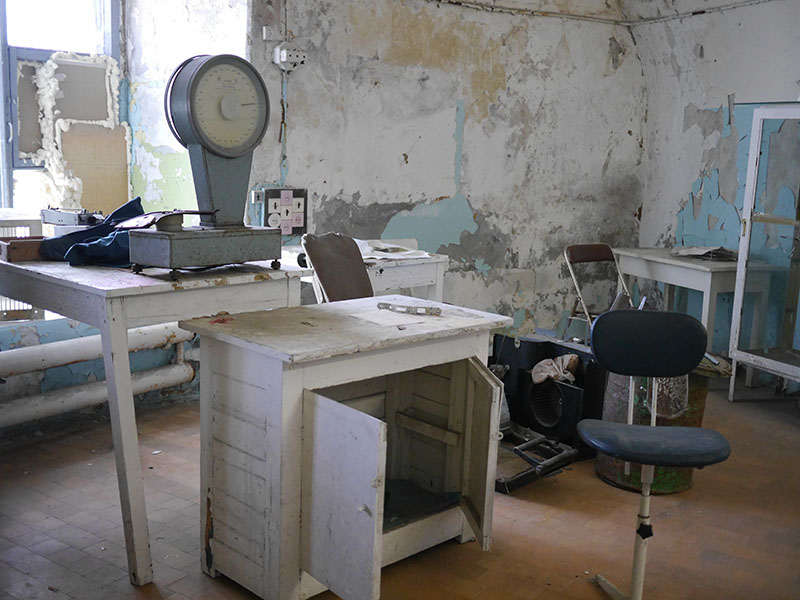 In one cell we saw the images of Demi Moore, Victoria Beckham, Jordan and Lisa from Steps plastered over the walls, indicating just how recent this was. I’m not quite sure how the Estonian inmates even got their hands on a copy of Smash hits magazine but there you go. 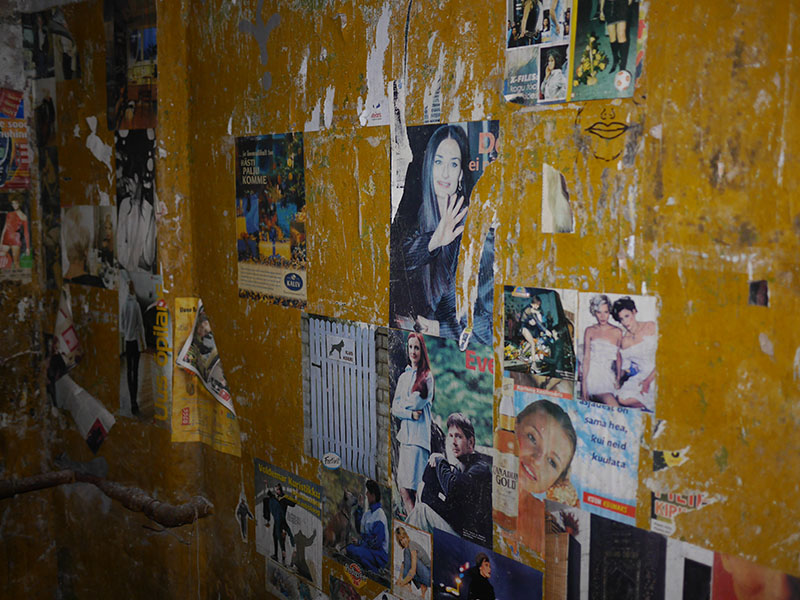 Apparently there’s a room we missed called the ‘Hanging Chamber’, which you can see in this Vice article- Estonian prison wankers. The ladder was used to pick off the noose from the necks of those who’d just been killed, before the bodies were thrown off the cliff into the ocean.

On the ground floor we saw the exercise yard and outdoor cells containing the empty frames of metal beds. I can only imagine how damp and cold it would have been down there. 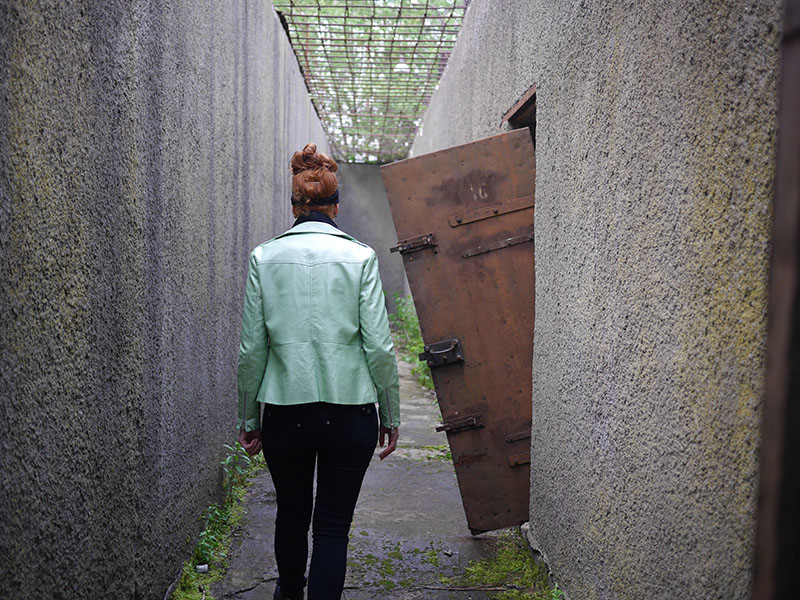 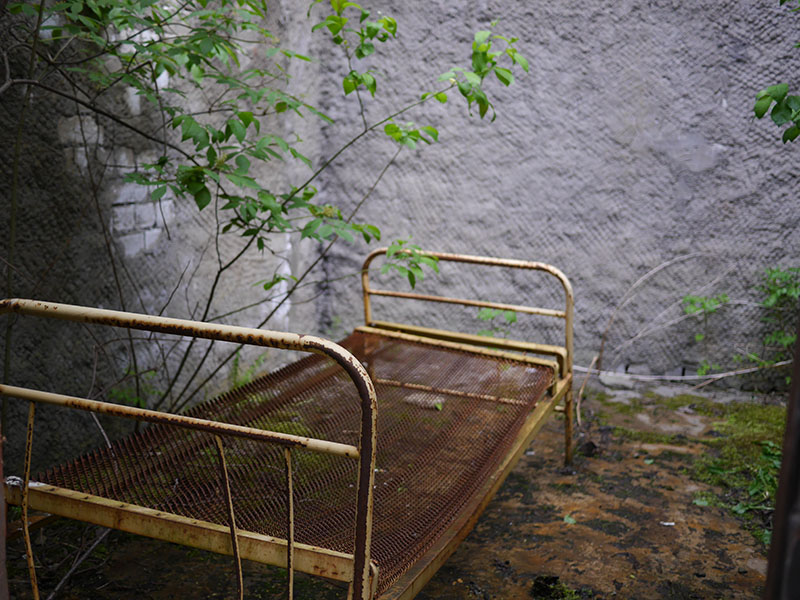 On the roof you can climb the watch tower, although I’m afraid of heights so didn’t go up!

As we ascended the stairs to the higher floors of the prison things seemed to get a little less grim. In fact there is a gallery of grafitti art with all sorts of murals, as well as a library still filled with books. 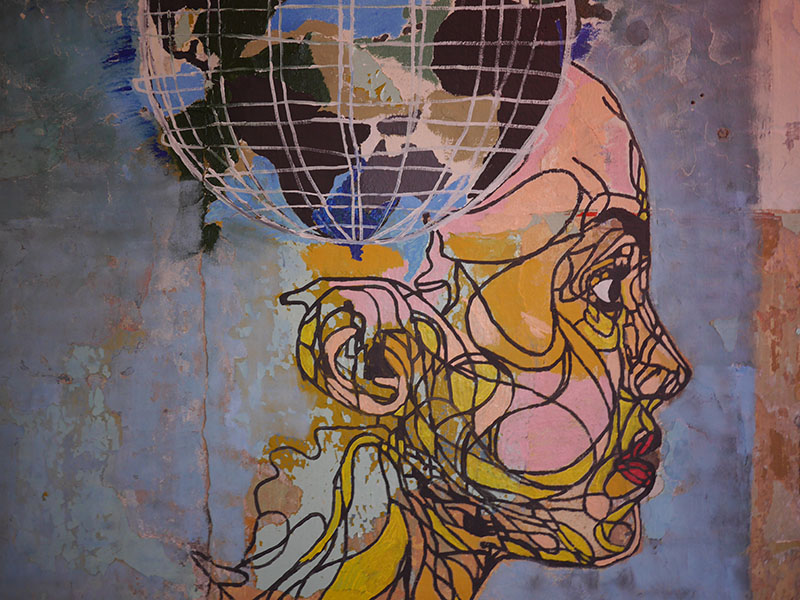 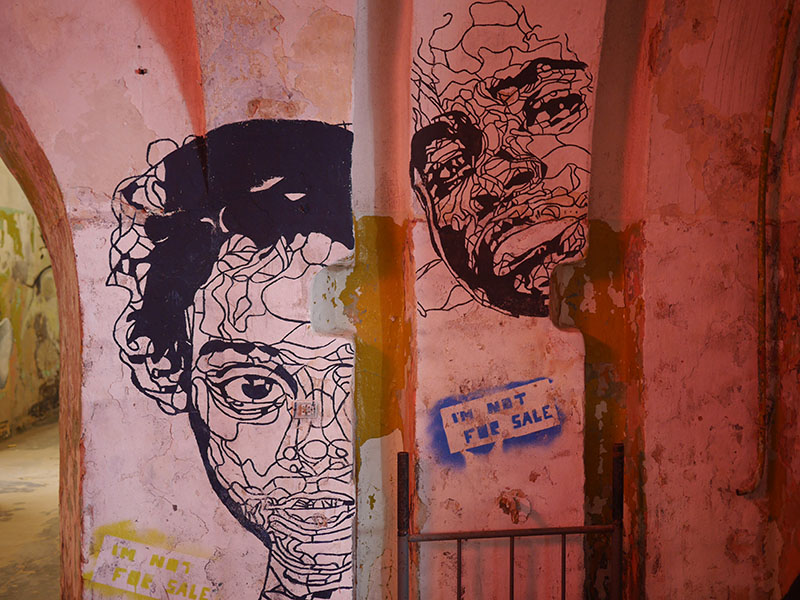 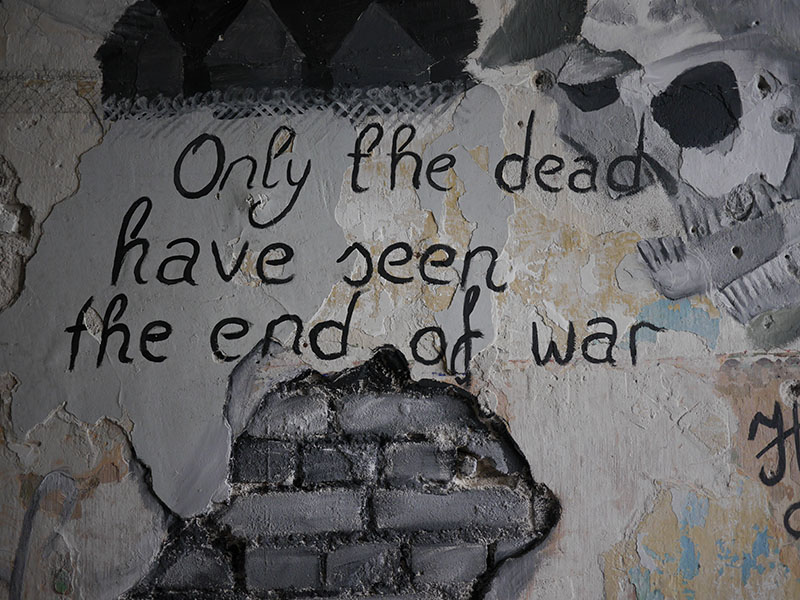 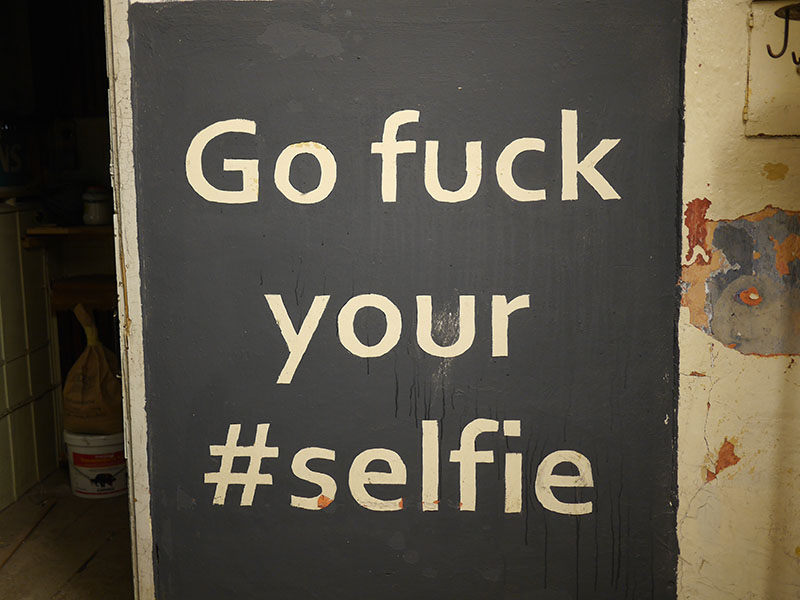 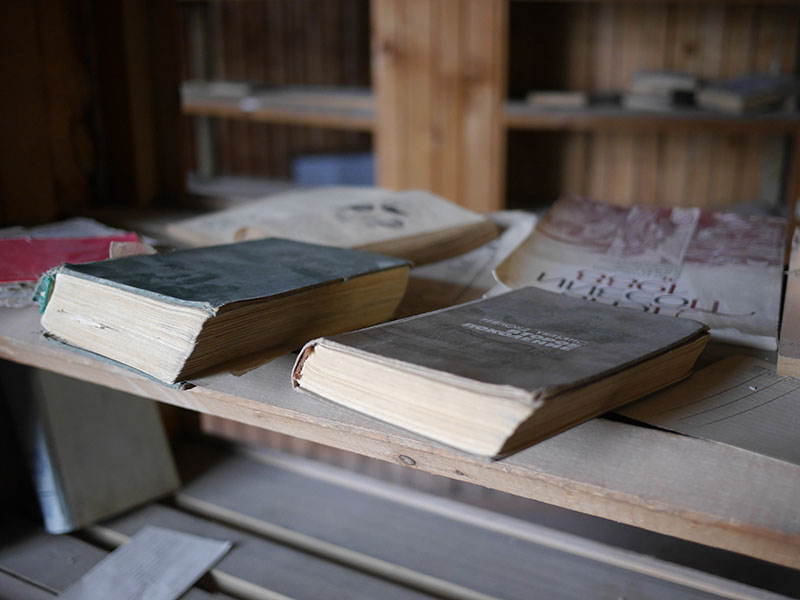 Walking around the prison we spotted quite a few beer bottles- evidence of some of the parties and raves that happen here. Apparently they’ve stopped now, but I can imagine some youngsters probably still sneak in at night.

Patarei prison was definitely my most memorable experience in Tallinn and I highly recommend you visit before they start turning it into a museum, or knocking it down. Apparently there are numerous abandoned buildings in Estonia, so if you plan on venturing outside of Tallinn, you could experience even more of these strange spots. 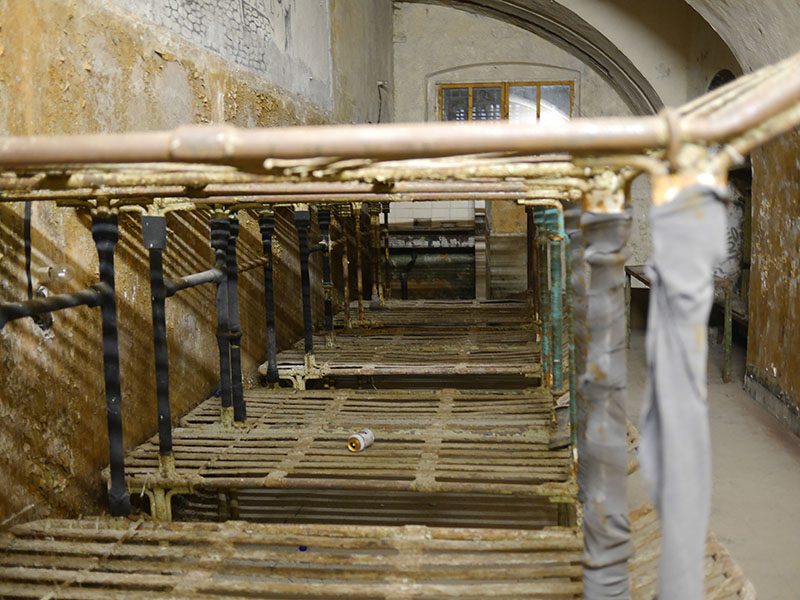 Inside those prison walls we felt a million miles away from the charming streets of Tallinn and I have to say we walked pretty briskly back to civilisation! 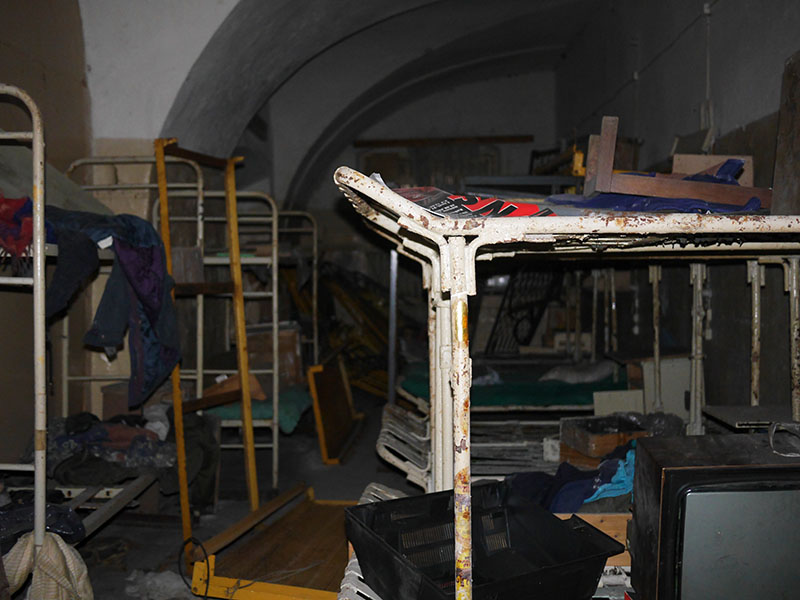 The beach pub is opened 12:00-21:00, or until sunrise. Tours are available for ordering throughout the year.