I’m fortunate enough to have flown the A350 already on Qatar Airways (the first airline to receive delivery of this aircraft type), and this time I was invited to experience the A350 on Finnair – Europe’s first carrier to operate the aircraft. This was my first flight on a Nordic airline, so I was intrigued to see what the service and cuisine would be like.

The trip took me from London to Beijing via a stop in Helsinki.  The first leg of my flight from Heathrow to Helsinki was in Business Class on an A321 aircraft, with perks including complimentary newspapers and magazines, champagne and a hot meal. The seats look like economy seats in a 3-3 configuration, but one seat is left open between each passenger, so you have some space to stretch out. The staff were welcoming and friendly, the food was decent and all in all I had a pleasant journey. 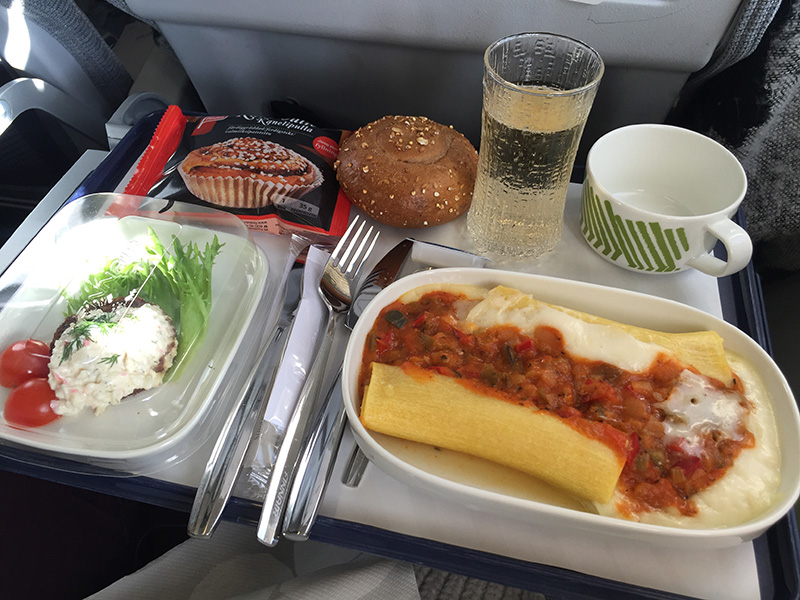 The second leg of my trip was on the inaugural A350 flight from Helsinki to Beijing. The new A350 is the newest aircraft from Airbus, offering bigger windows, newly designed overhead storage bins, less curved sidewalls and LED mood lighting, with more space and light than ever before. Read on for more info about the seat, the inflight entertainment and the onboard cuisine…

Helsinki airport is compact and not too crowded, so it’s a nice airport to transit through. Since all the gates and services are located in one terminal, I didn’t have to walk very far to get to the lounge. In the non-Schengen area there are two lounges located between gates 36 and 37, and I had the opportunity to experience both of them.

The lounge for business class travellers and frequent flyers has a self-service buffet area with snacks, warm meals, hot and cold drinks. There’s a large dining area with tables and chairs, but if you can grab one of the recliner seats that look out onto the runway, these are the best seats in the house. 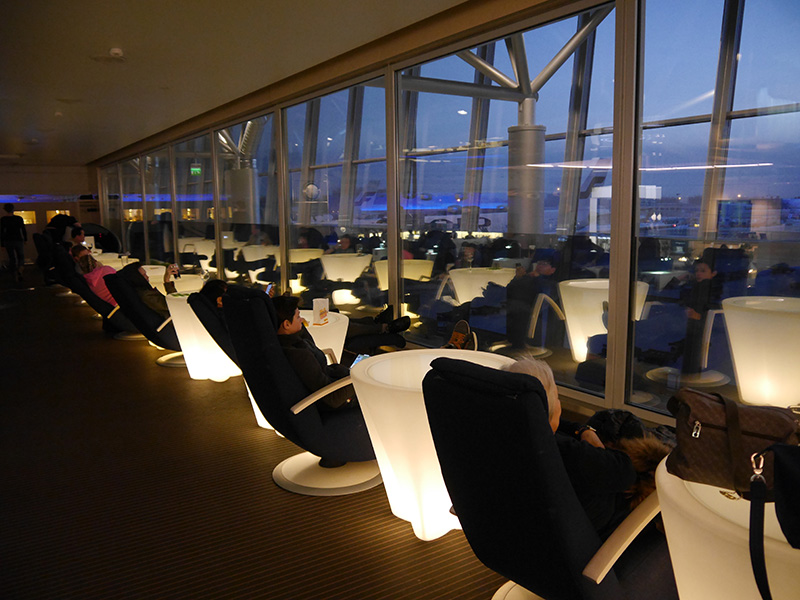 The second lounge – the Premium Lounge – is for Finnair Plus Gold and Platinum members, and oneworld Emerald and Sapphire tier members. It has a smaller and more exclusive vibe than the business class lounge, with an interior that feels a bit like you’ve walked into an ice bar. Our flight was delayed by an hour or so, but Finnair alerted me by text so I was kept well informed. Plus that just meant more time drinking champagne in the lounge, which wasn’t all bad. 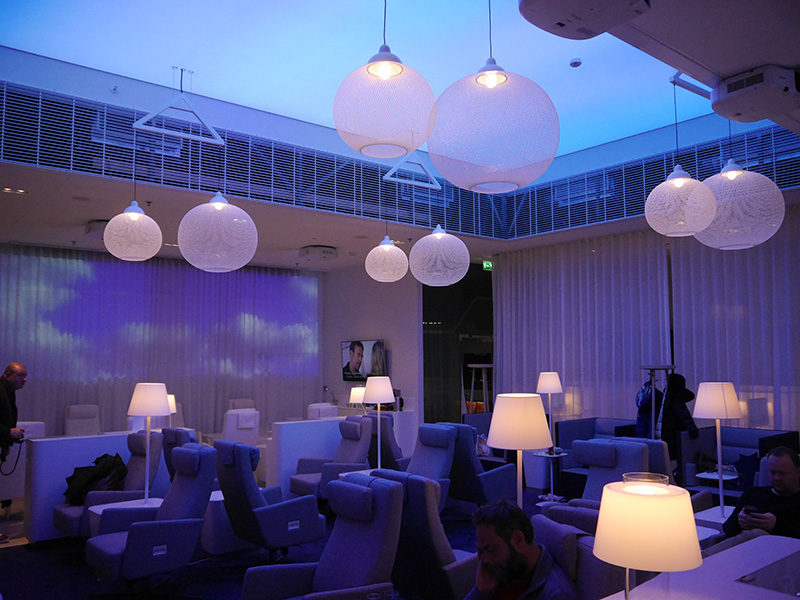 The interior of the Business Class cabin is very light and airy, with light blue upholstery and brightly coloured cushions to add a bit of fun. It feels very Nordic; minimalist, but with a dash of colour. The cabin is divided into two sections – the first 8 rows are located in the nose of the plane, while rows 9-12 are situated behind the galley, and are separated from Economy by a curtain. I recommend sitting in rows 1-8 so you turn left as you enter the plane. If you sit in rows 9-12, you will get the foot fall from Economy passengers as they make their way to their seats. 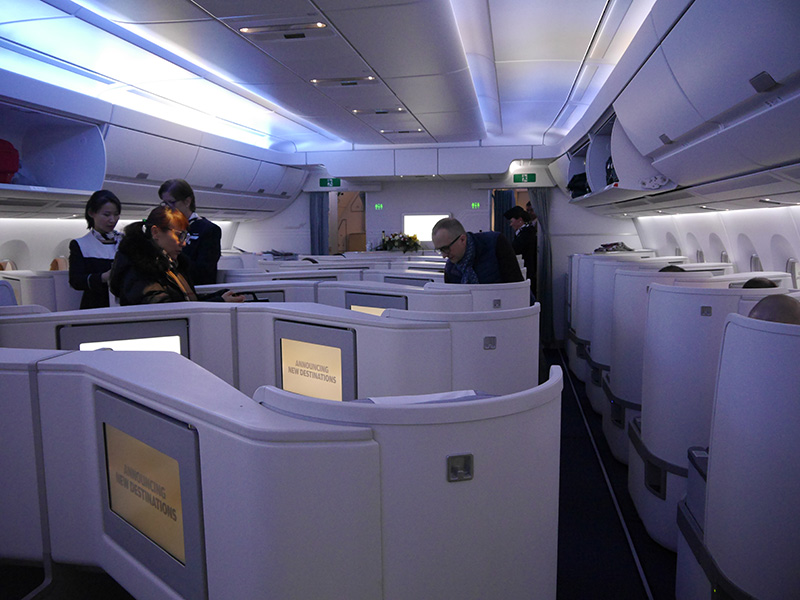 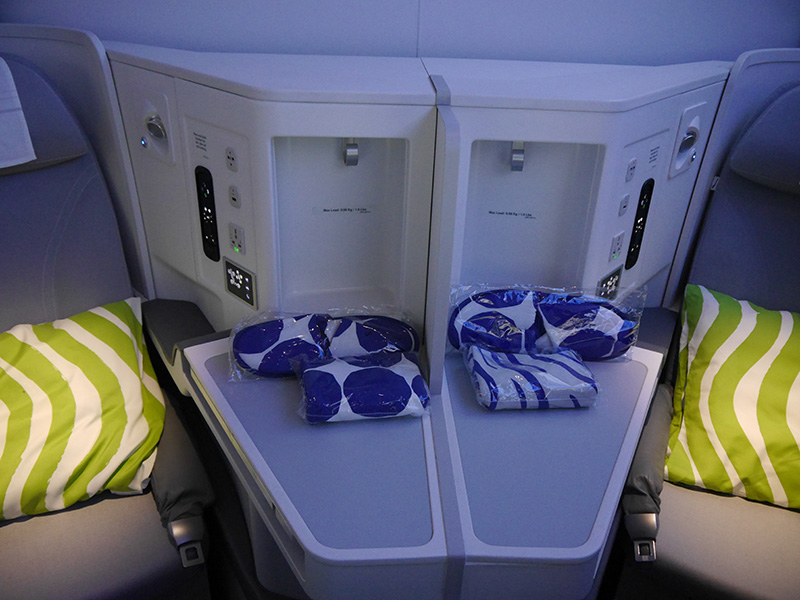 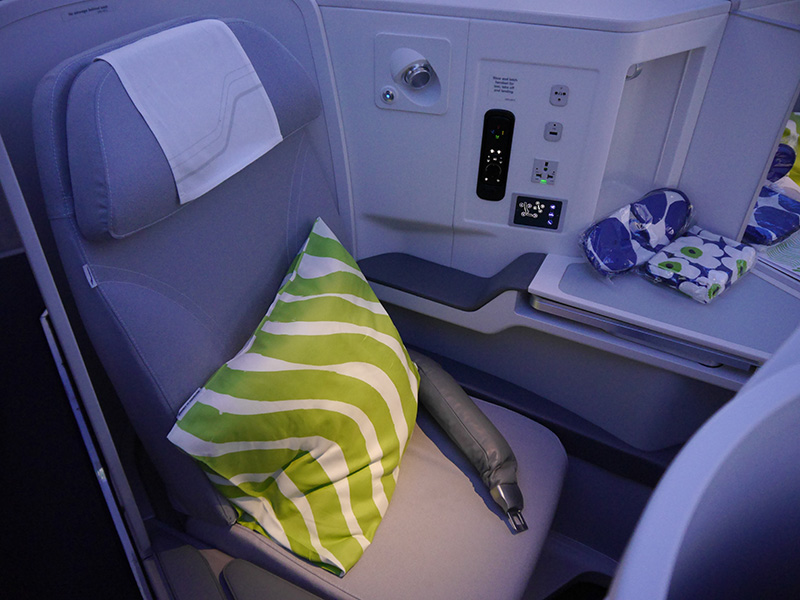 Seats in Business Class are Zodiac Cirrus III models that offer direct aisle access and convert into fully flat beds. To the left of my shoulder was a USB port and plug socket, along with a reading light and a little hanger for my headphones. The seat controls and the remote control for the entertainment system can be found in the central console, along with a fold out tray table and a pocket containing menus and inflight literature. One thing I would have liked to have seen on the A350 is more storage space, as the only storage space is a small compartment next to the arm rest. This was big enough to fit my mobile phone and camera, but not big enough for a laptop, so most of my belongings needed to be stored in the overhead bins. 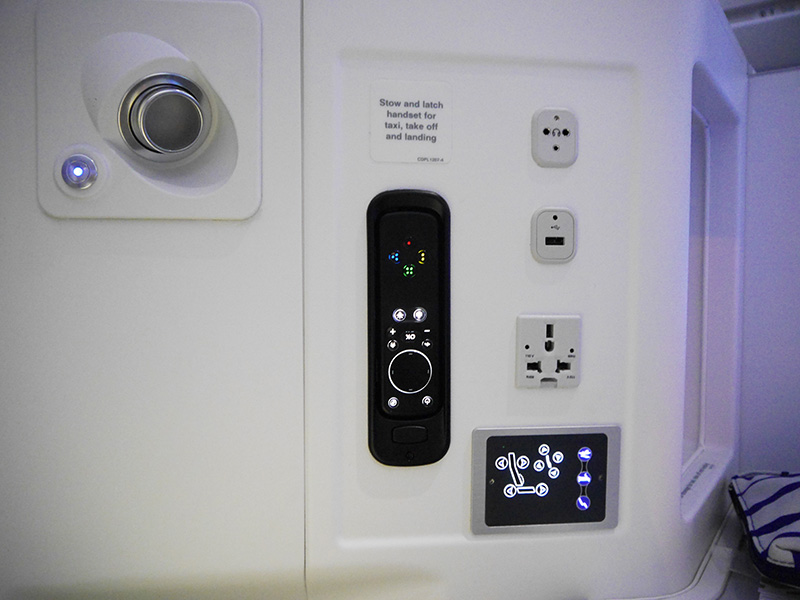 The A350 features a special signature menu by executive chef Kari Aihinen, who is the executive chef of Helsinki’s prestigious Savoy restaurant. His philosophy is to live according to the season, so the meals onboard the aircraft are made with seasonal ingredients and flavours.

It all kicked off with a Nordic-inspired blue skies cocktail, made from Lapponia Blueberry Liquer and Nicolas Feuillatte Brut Grande Reserve. The cocktail is served in an Ultima Thule glass – a Finnish classic that was created for Finnair’s first flight to New York in 1969. 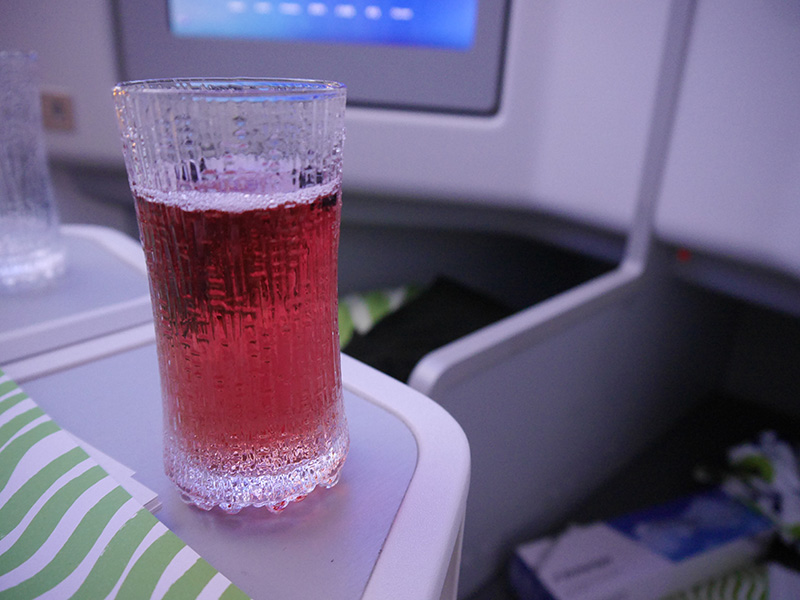 The meal service began with a little amuse bouche of cold smoked Baltic herring and vendace roe. The following course was one of the best things I’ve ever eaten in my life, but sadly I don’t have a picture of it. Yes it was THAT good that I ate it without remembering to get my camera out. The dish was Vorschmack with sour cream, pickled beetroot and cucumber. When I learnt that Vorschmack was essentially a bowl of ground beef I didn’t really feel particularly excited, but it tasted so good I could have had two or three more bowls of it. I just had to know what the beef was seasoned with, but apparently this particular recipe from the Savoy is top secret. Who knew ground beef could taste so good?! 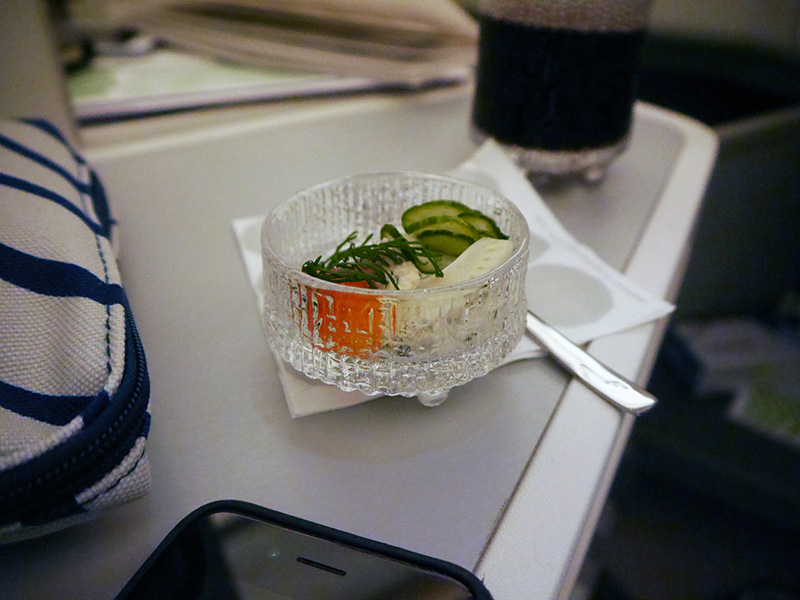 For my main course I ordered the slow cooked reindeer entrecote with Jerusalem artichoke puree and dark sea buckthorn sauce. It was my first time tasting reindeer and I thought it was incredibly tender and full of flavour. All courses are served on Marimekko for Finnair tableware. 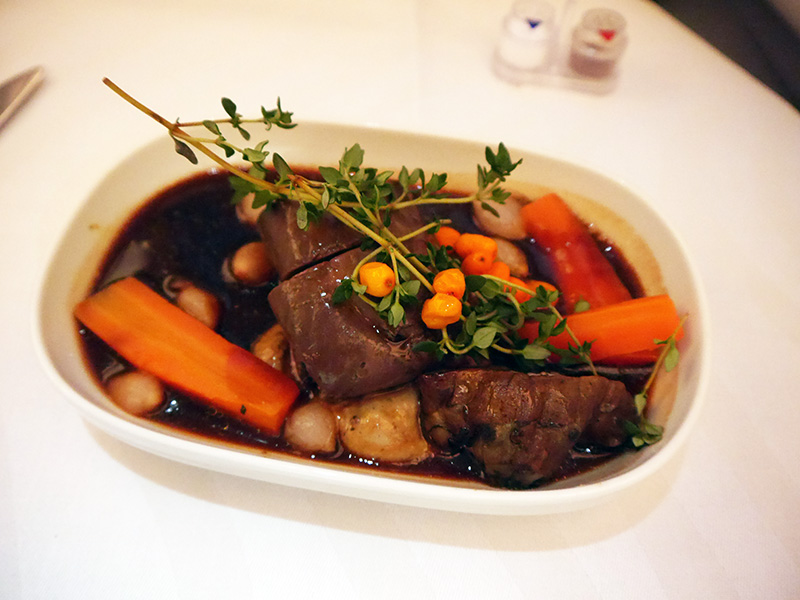 To end the meal I was served a cheese plate from Finnish small producers, followed by an apple cake ‘ala Marski’ with cinnamon mousse and warm caramel sauce. By this time I was practically in a food coma and it was time to convert my seat into a fully flat bed. 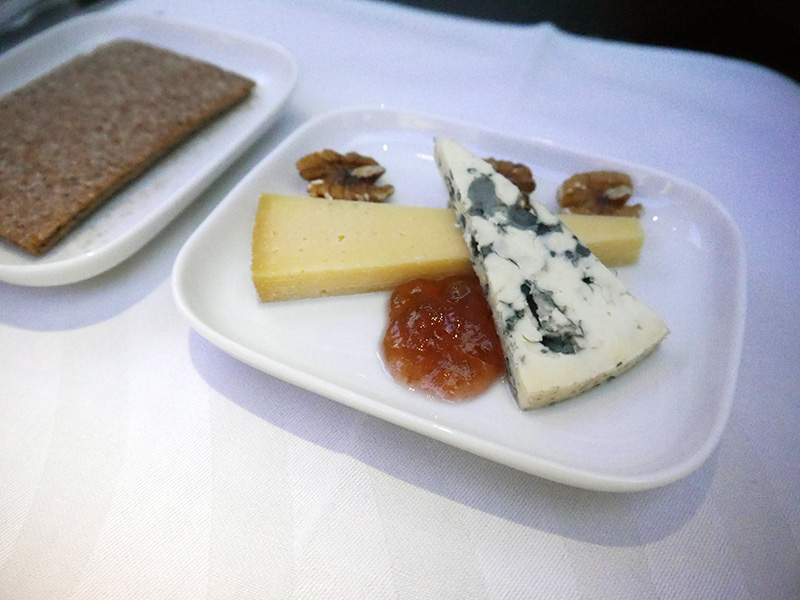 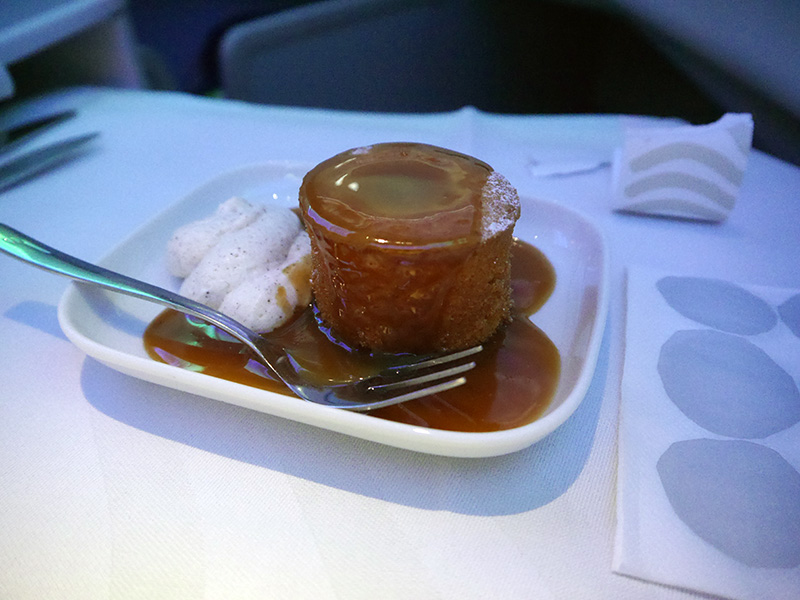 Since our flight was due to arrive early in the morning, we were served breakfast 90 minutes before landing. There was a choice of an American Breakfast (omelette with smoked salmon) or a Chinese breakfast, and since I’m not into typical breakfast foods, I opted for the Chinese version, which consisted of seafood noodles with prawns and bok choi.

You can fill in your order on the breakfast card just before you go to sleep or you can let staff know if you don’t wish to be woken up. If you’d like to squeeze in a few extra minutes snooze time, you can also opt for a light breakfast 60 minutes before landing. 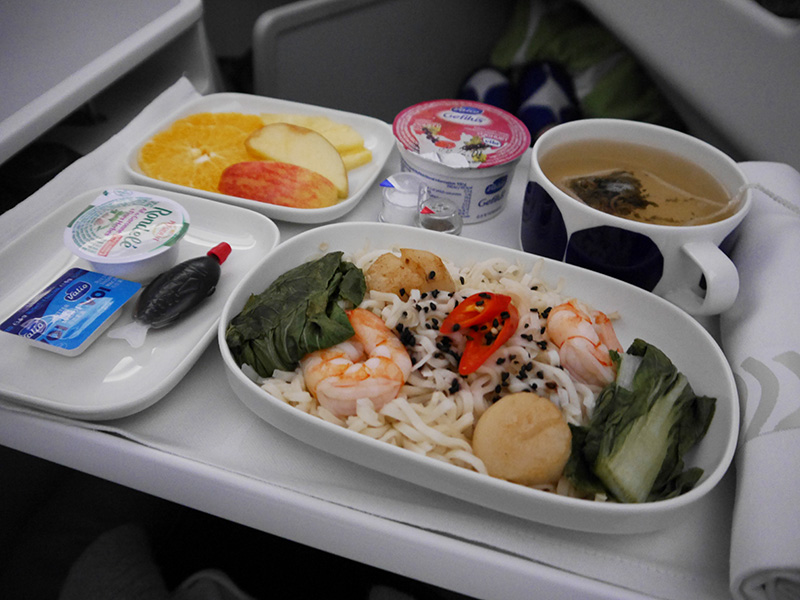 The entertainment system consists of a 16″ touchscreen with Bose noise cancelling headset. I found the touchscreen to be incredibly responsive and packed with the latest movies, although I was so sleepy on this particular flight I didn’t have a chance to watch one! Finnair provides free WiFi in Business Class, so all you have to do is enter the token code displayed on your entertainment screen and you’re good to go. 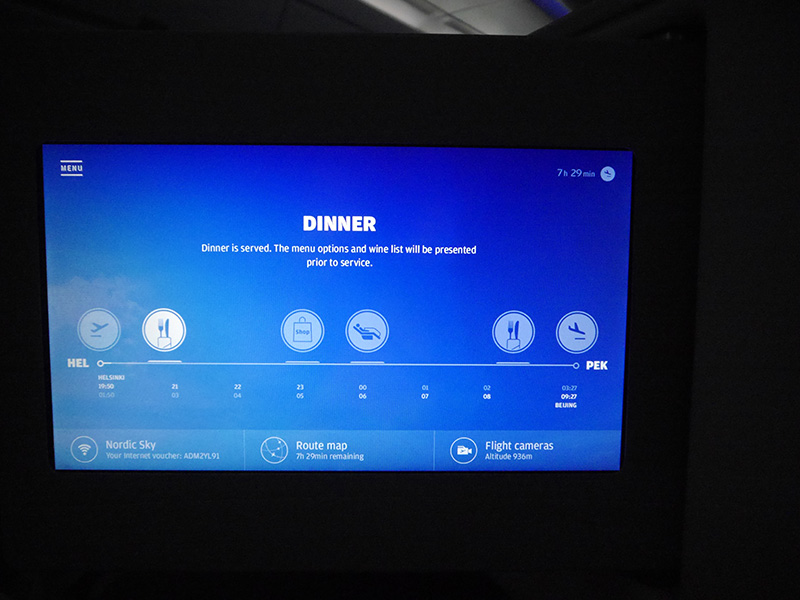 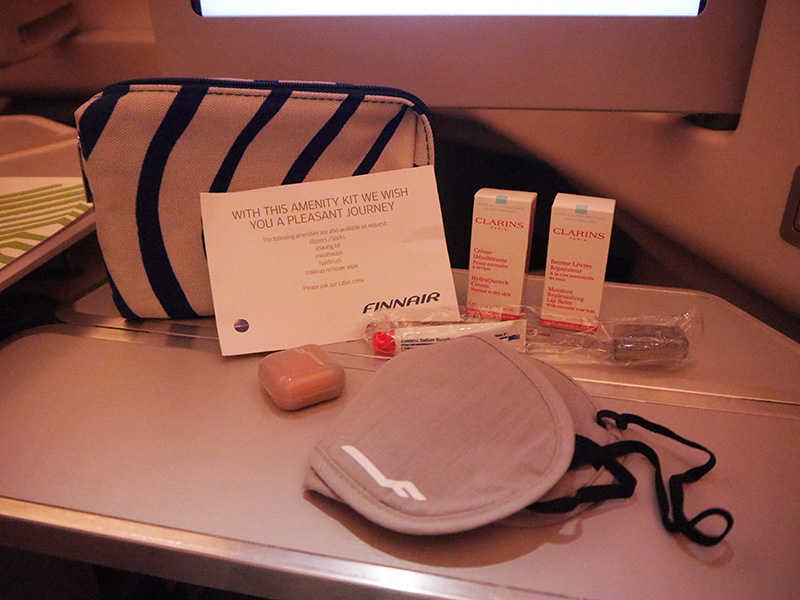 Before take-off a member of cabin crew put my shoes in a shoe bag and I was provided with a pair of slippers. In Business Class you receive a complimentary Marimekko flower patterned zip bag containing Clarins skincare products, earplugs, toothbrush and toothpaste, and an eye mask. There’s also a bathroom geared towards female travellers, containing fragrances, cosmetics and skincare products, although the bathroom can still be used by both sexes.

To see what Finnair’s Business Class is like in more detail, you can watch my full video review on Youtube:

As a travel blogger, I really appreciated having free WiFi in Business Class, so I was able to upload pictures, message my friends on Whatsapp and answer my emails. One thing that stood out on Finnair was the pleasantness of the staff – they were cheerful and provided a great service. It really is just a shame that this flight wasn’t a little bit longer. Flying Finnair means you are flying the shorter and faster route between Europe and Asia, but by the time I had finished my meal I only had a few hours sleep before landing.

Disclosure: I was a guest of Finnair, however the opinions expressed here are my honest views.

1 thought on “Finnair A350 Business Class Review: Helsinki to Beijing”