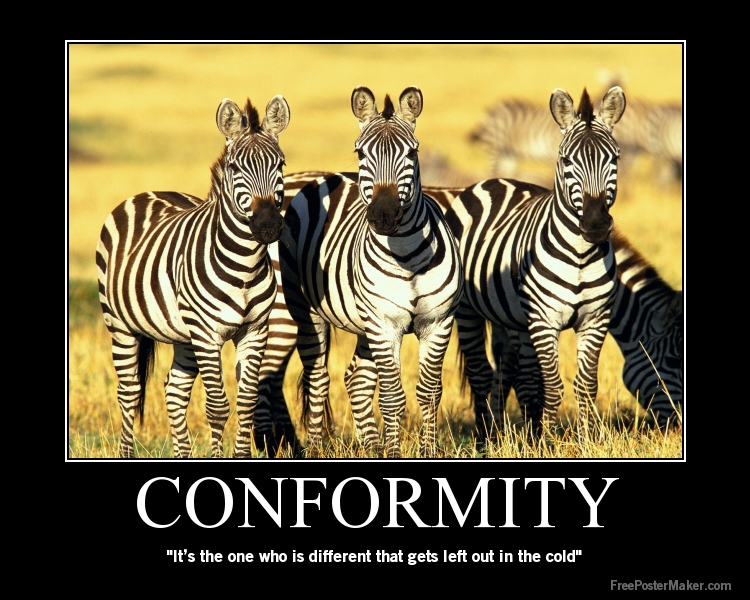 25 Nov Conforming to Society vs Living Your Dreams

Posted at 10:18h in Blog by Victoria 19 Comments
Share

Part of my decision to travel the world was because of my dislike for that word. Why are we so hell bent on conforming to society?

[quote]Conformity is the act of matching attitudes, beliefs, and behaviours to what individuals perceive is normal to their society or social group. This influence occurs in small groups and/or society as a whole, and may result from subtle unconscious influences, or direct and overt social pressure.[/quote]

In school I was a straight A student and went to an all-girls’ private school. I was told by my teachers and my Mum, that straight-A students go to university and study to be a doctor or a lawyer…something with ‘status’. Those doctors or lawyers go on to make lots of money, get a mortgage, buy a house, meet a handsome fellow and have a couple of children. They get to go to those school reunions at 50 and feel comfortable that they did a good job you know?

But deep down I always knew I didn’t really want to conform to society. Why does that pattern constitute success? What is success even??

I liked the idea of being different. My Mum could see that, and that made her despair somewhat. She has struggled with money, and she didn’t want to see me do the same. I didn’t know quite what I wanted to be, but I knew it wasn’t what my teachers hoped for me.

I like watching movies, and I would watch these inspirational films and think “I want to do something great with my life”. Travel. Have fun. Do amazing things. Fall in love. Meet all sorts of weird and wonderful people. Perhaps change the world around me a little bit.

All those great inventors, explorers, entrepreneurs- the people that I look up to- they all have one thing in common…they gave the middle finger to conformity. Some of the most successful people in the world didn’t even finish school! I recently read an article about billionnaire Richard Branson. He’s dyslexic, struggled in school and left at 15 because he had some big ideas. At the age of 99, Sir Richard’s grandmother wrote to him to suggest he read: “A Brief History of Time” by Stephen Hawking…within the letter she wrote; “You’ve got one go in life, so make the most of it.” Looks like he really paid attention to those words.

One day I sat down and wondered…why do we eat cereal for breakfast? Why can’t we eat other foods at breakfast time? Why does the fork go on the left and the knife on the right? Why is a suit considered formal attire? And the only answer I could come up with…was convention.

Next time you do something, ask yourself; “Am I doing it because I want to, or because it’s what society tells me to do?”

Perhaps there’s an afterlife, but I’m not taking my chances.

To me, we only get one shot at life. Don’t worry about what people think. Don’t waste it working in a job that doesn’t make you happy. Don’t put off all those things you want to do for when you retire. You might not even make it to retirement. Live your dreams whilst you are young. Travel. Explore. Love. Live. Have stories to tell your grandchildren. Live a life that people would want to write about.

It can be scary being different. But don’t measure your own life by what other people are doing.

Let’s get one thing straight, living your dreams doesn’t have to be expensive. People think that traveling the world costs thousands of dollars, but you can do it for cheap. You can find jobs all over the world to get you by.

I get really tired of people telling me I’m “lucky” that I get to travel the word. “I wish I was doing what you’re doing!” they tell me. Why don’t you go an do it then? Save up some money and go do it!

And it’s not luck. It was a conscious decision I took. It’s been pretty hair-raising sometimes, but the hard work is starting to pay off. It’s not easy being self-employed, and I work pretty damn hard.

Traveling not really your thing? No worries. That’s what’s great about living your dreams. They’re your dreams. Perhaps you have a business idea but you’ve just not taken the leap. Well there’s no time like the present.

I’m 24. I may not be rich. I don’t have a house. My Mum still despairs. But I have never worked 9 to 5. I don’t like getting up early. I’m really just at the beginning of the road, but I like where it’s heading. I make money for this blog and from freelancing. I’m looking at starting new projects and websites. I like creating new ideas and being my own boss.

NOT conforming to society might just be the best decision you can ever make. To quote the Apple commercial Think Different – it’s the “crazy ones” that achieve the success.

Live your dreams as you travel the world and also work effortlessly from anywhere on any device with online services such as CloudDesktopOnline.com and CloudAppsPortal.com