Posted at 12:57h in Blog, REVIEWS by Victoria 2 Comments
Share 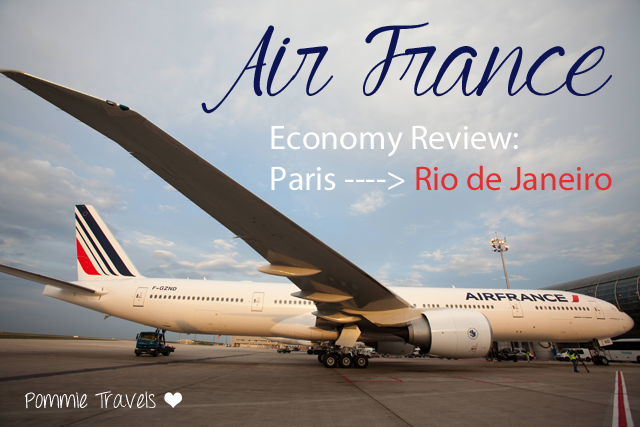 Air France operates lots of flights from Paris Charles de Gaulle to various destinations in South America and recently I flew with this airline from Manchester to Rio de Janeiro via Paris. It was my first time flying with Air France since I was a child and being a bit of an aviation geek, I was eager to try out their flight experience.

I quite like flying from Manchester airport- not only because it’s my closest airport, but also because it’s that little bit smaller. It may not have the shopping that the London airports have, but it’s generally easier to get to the gate and on a good day it doesn’t take too long to get through security. Before my flight I had the opportunity to relax in the Escape Lounge at Terminal 3, which you can pre-book online for £18.99 per adult. I’ve hung out in a few airport lounges over the years and this was right up there with some of the First and Business Class lounges of major airlines- I was very pleasantly surprised. 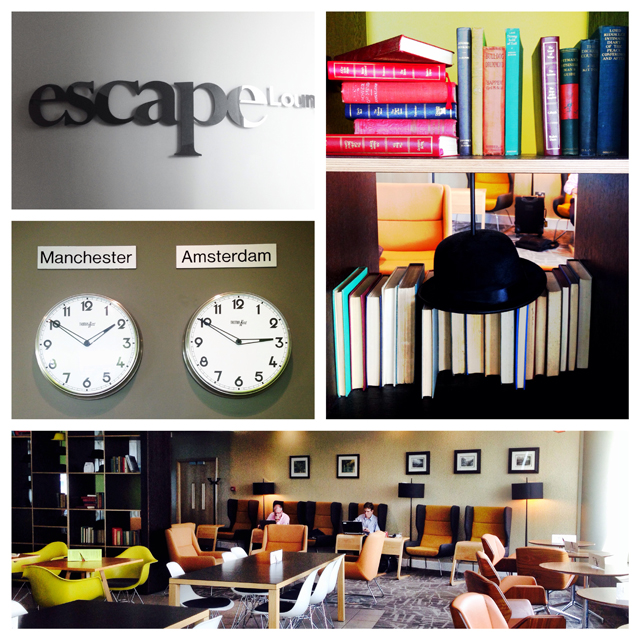 Not only was the lounge modern and stylish, it also had a fantastic view of the runway. You can see my Air France aircraft in the background: 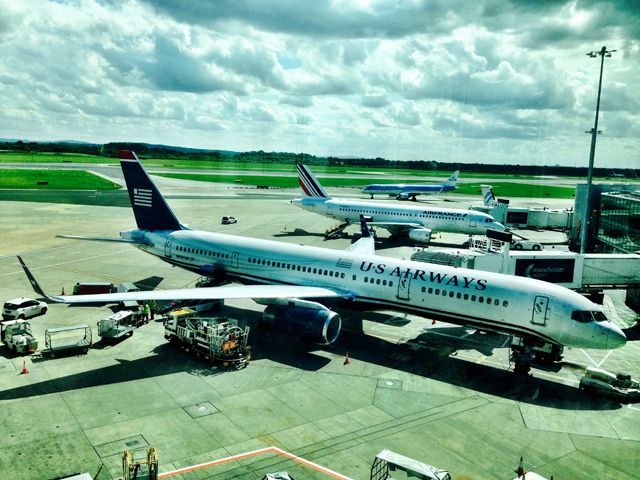 The lounge has free Wi-Fi and plenty of comfy seating, plus the food options are good. You can order hot soup and fresh bread from the service staff, or help yourself to the buffet which consists of various snacks, including sandwiches, cookies, cakes, pasta salad, kettle chips, nuts, cheeses, relishes, dressings and dips. You can pour yourself a beer, cider or glass of wine, or help yourself to another non-alcoholic beverage from the fridge.

I only had about 20 minutes to spare in here by the time I’d got through security and done my airport shopping- I really wish I’d had longer!

My first flight from Manchester to Paris departed on time at 14:20 and only took about 1 hour and 30 minutes, landing at 16:50. I often fly with budget carriers on short haul flights to Europe so it made a nice change to be offered complimentary drinks and a snack. I had several hours to kill at Charles de Gaulle airport after that, with my flight to Rio departing at 23:25 at night.

Luckily Charles de Gaulle has some relaxation areas with loungers that are very easy to fall asleep in. After landing I had a bit of a nap, then headed through security to my gate area. Besides the luxury shops, it was nice to see some healthy food options; I get really tired of all the fast food places and generally lacklustre food you usually see in airports. I sat down in Exki, which serves lots of natural, fresh foods and got my laptop out to do some work on the free airport Wi-Fi.

The flight boarded on time and the aircraft I was flying on was a modern Boeing 777-300ER. The first thing that stood out was the stylish colours on Air France– I like the navy blue upholstery and the bright red cushions. It also seemed fairly spacious, with large overhead lockers. 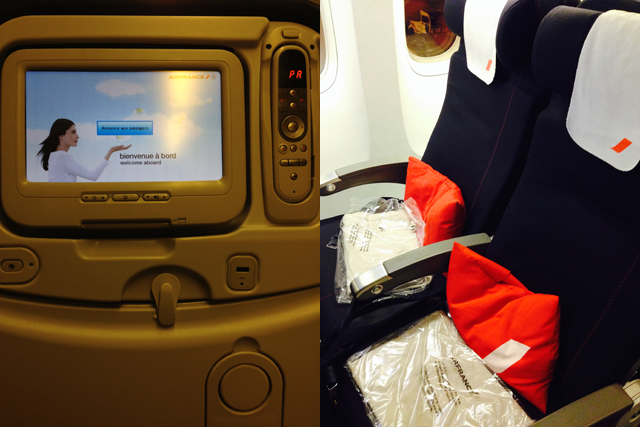 When checking in online I looked at the seat map and selected a window seat towards the rear of the plane (Seat 55L), because the rows towards the front of the aircraft were in threes, whereas the ones at the back were in twos. In hindsight I wish I’d picked one of the rows of three, because although there was more room, there was a huge gap between my seat and the window. I always choose a window seat where possible because I like to be able to rest my head against it and fall asleep, but with this big void between my seat and the window, that wasn’t really possible. I tried to bridge the gap with a bunch of pillows, but it didn’t really work. Note to self: choose a row of three if you want the window seat.

In terms of entertainment there’s a personal seat-back video screen and a remote control that can be stowed away alongside it. Although there isn’t a plug socket, there is a USB port so I was able to charge my mobile phone throughout the flight. There were several new movie releases available to watch, but I was so tired that I didn’t even watch a movie! You are also supplied with a feather-filled cushion, a blanket and an eye mask to help you get comfortable.

A highlight of flying in Economy on Air France is that you can order a glass of champagne. While many airlines reserve champagne for Business and First Class, on Air France you are treated to a glass of bubbly even if you’re flying in coach. Naturally I had to order it! 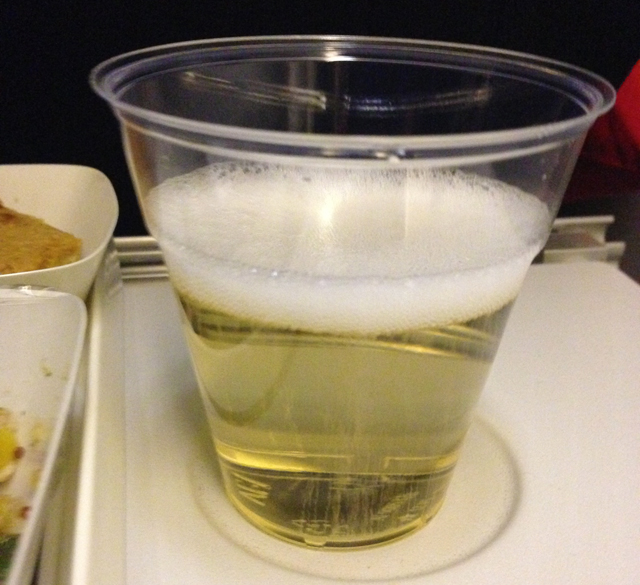 The French are famous for their cuisine and they certainly don’t skimp! The main meal included a quinoa salad and a real bread roll with President butter, not one of the fake foamy tasting rolls you get on some flights. For the main there were two choices- I had the chicken in a creamy sauce with orzo pasta, which tasted pretty fresh, healthy and good. I passed on the dessert and went straight to the best bit- the cheese. Of course this is a French airline, so naturally there was Camembert in there…my favourite! 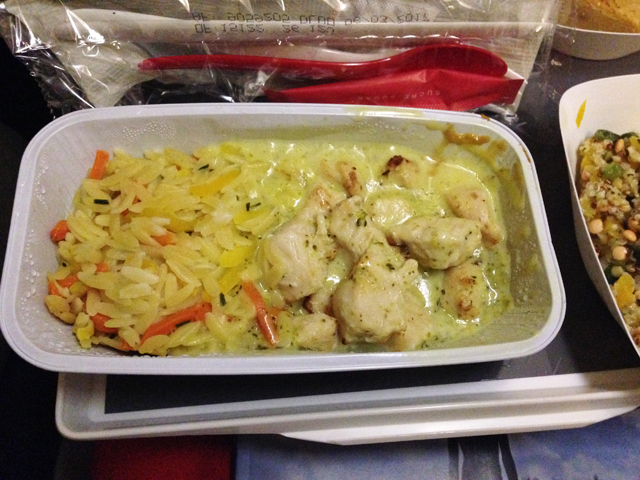 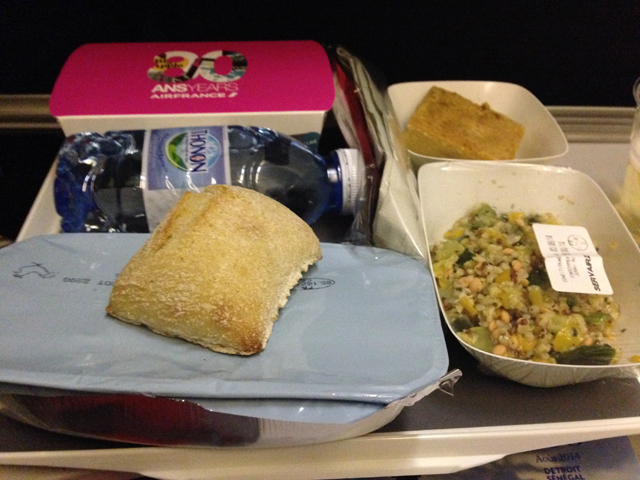 After the meal I chatted to my new neighbour for quite a while over a couple of Bloody Marys, then as soon as the cabin lights were dimmed I drifted to sleep for what seemed like a few hours, but who knows. Eventually it was time for the second meal service- breakfast. I get a bit bored of the usual omelette and chicken sausage option on flights, but on this particular flight we had a cheese quiche which tasted pretty good. Alongside it there was orange juice, a yoghurt, two bread rolls, President butter, jam and a huge tub of apple compote. My neighbour thought it looked and tasted like baby food, but I secretly liked this cold apple sauce and ate the whole lot pretty quickly. 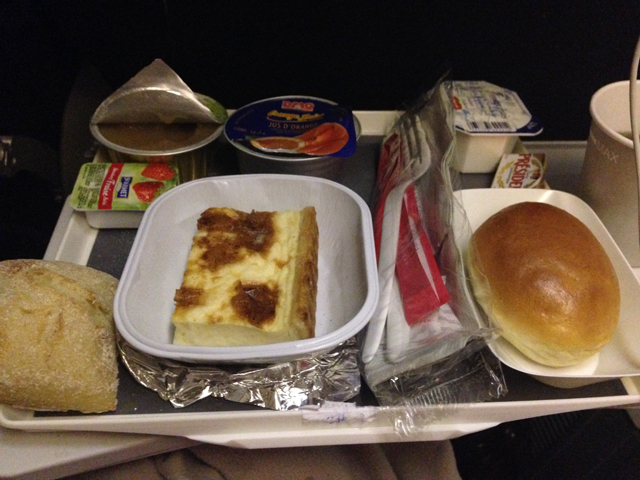 Air France cabin crew were really very friendly and welcoming when I boarded the plane, helping me with my bags. Even though the drinks service didn’t come around as often as we would have liked, we seemed to have no problem getting the attention of a flight attendant for more drinks. I definitely rate their customer service.

Have you flown Air France? What did you think? Fancy going to South America? Air France have created an interactive destinations guide with plenty of suggestions for things to do in any of their destinations around the world.