Where do I start with explaining how amazing the Philippines is?! 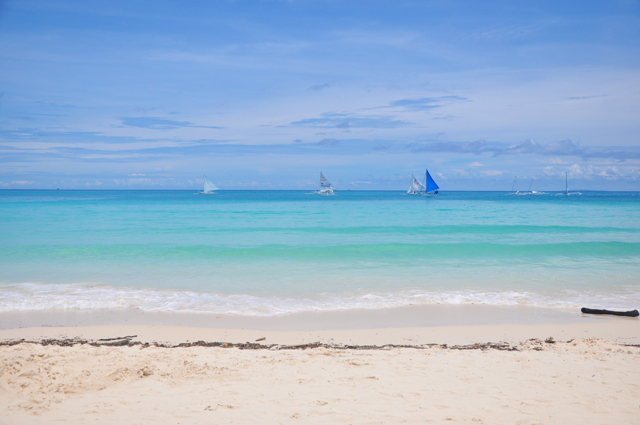 I’ve been to numerous countries in Southeast Asia-Cambodia, Laos, Myanmar, Thailand, Vietnam, Malaysia, Indonesia and Singapore-but the Philippines really captured my heart. I had such a fantastic two weeks there, and I can’t wait to go back again some day. I travelled solo in the Philippines and I felt so safe and welcomed.

I feel like a lot of backpackers skip the Philippines because it is a little more out of the way. If you’re on a budget and traveling overland by buses and trains it can feel like a bit of a stretch to fly out to the Philippines, but with AirAsia offering cheap flights to Manila and other islands, there’s no excuse not to go!

Here’s why it’s more fun in the Philippines…

Honestly, from all my travels, Filipinos have been the friendliest and most welcoming people I have ever come across. It’s impossible not to fall in love with a country when the people are this kind and smiley. Plus the kids…they are so so cute. There are so many times when I see kids crying or acting up back home, but Filipino kids seem so calm and well behaved. 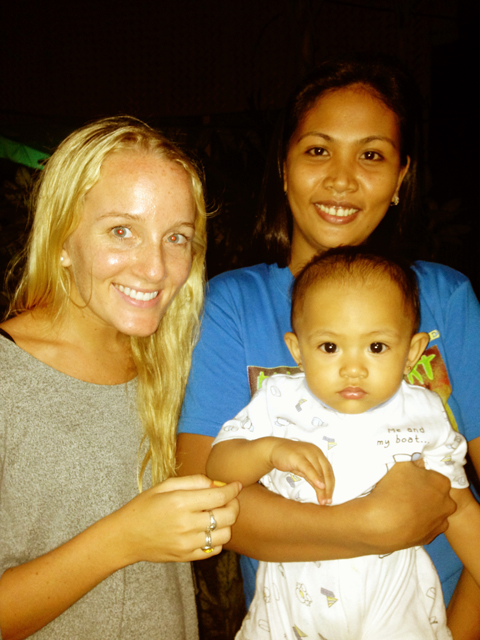 They love to celebrate too. Take my birthday for instance. I usually keep my birthday a little quiet because I don’t like to make a fuss, but the staff at Frendz resort went to the trouble of getting me a birthday cake! I heard a knock at the door to my dorm room, and when I opened it, I was greeted by several members of staff singing Happy Birthday with a guitar! I was shocked and so happy that they would do such a lovely thing for me. It was one of the best birthdays I’ve had in a while. 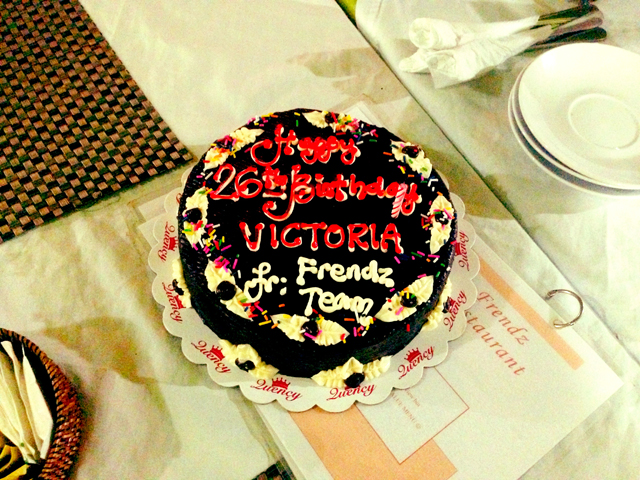 After visiting various other countries in Southeast Asia, I was used to being hassled a bit and ripped off at times. In the Philippines I didn’t feel like that at all. It was so easy to become friends with Filipinos and I always felt safe and welcomed.

With more than 7,000 islands and even more beaches, you’re really spoilt for choice in the Philippines. If you’re looking for blinding white sands and turquoise blue water, the Philippines has that and more. I only made it to Boracay this trip, but would love to go back and visit El Nido in Palawan. My favourite beach in Boracay was Puka Beach– it was paradise! 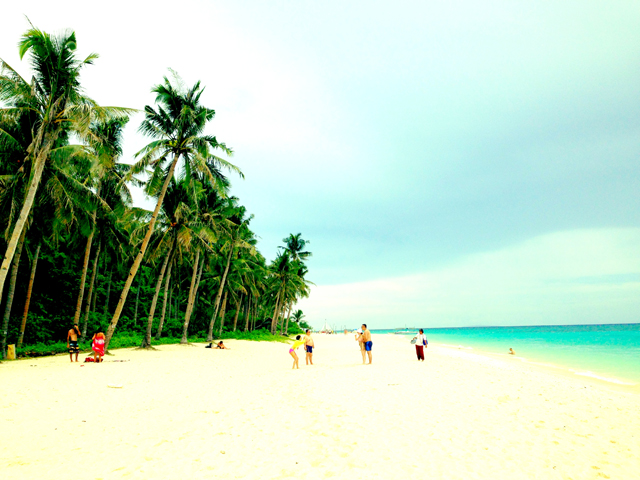 The Filipino people speak brilliant English. Obviously as a foreigner I shouldn’t expect people in other countries to speak English, but it made my time there a lot easier because I could communicate with people and there was no language barrier. 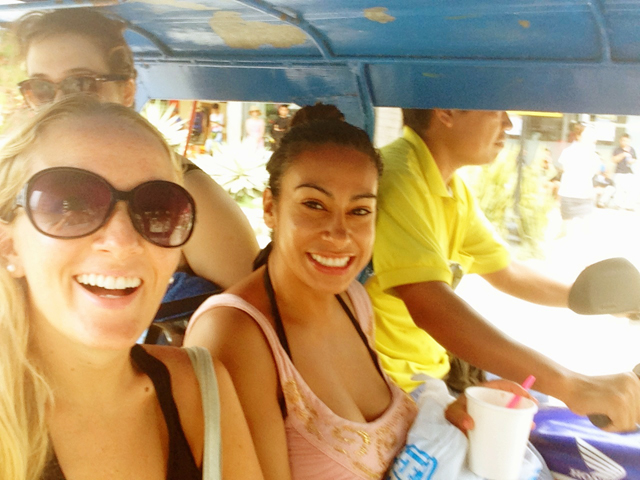 When I was in Boracay, I ate spamsilog for breakfast every day. I know SPAM is a bit of an acquired taste, but my grandma used to feed it to me when I was a kid so it reminded me of my childhood days! SPAM was introduced to Filipinos by the Americans during World War II, and now it is a treasured food dish. As you can see from the picture, spamsilog consists of slices of fried SPAM, a portion of garlic rice, slices of tomato and a fried egg. Yum! 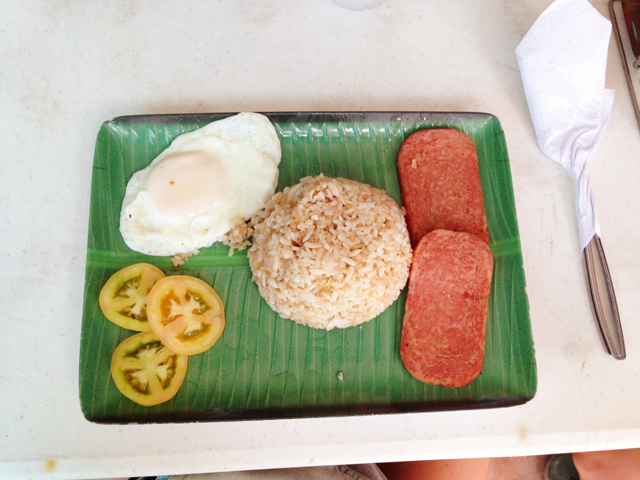 You can’t visit the Philippines without trying Halo Halo at some point. It’s basically a dessert made from shaved ice and evaporated milk, which is mixed with a funny concoction of things like kidney beans, candy and fruits. It sounds so wrong, but it tastes so right! It’s the perfect way to cool off in the heat and I love the assortment of textures.

Translated “Halo-Halo” literally means “mix mix” and it is very symbolic to the Filipino culture; a mixture of cultural influences such as Chinese, Japanese, Malaysian, Spanish and American. If you visit Boracay, drop by Halo Halo Hut. 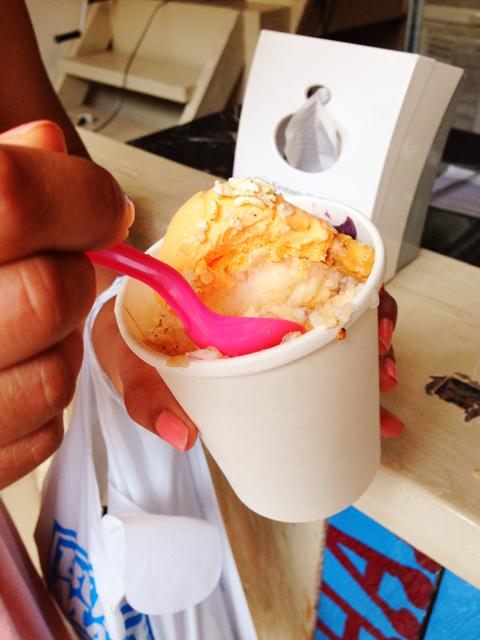 I didn’t know much about Filipino cuisine until I arrived in Manila, but I soon discovered that they love pork! And not just bacon or pork loin; they eat every part of the pig! At first I was a little bit nervous about trying some of the foods because I had no idea what they contained, but I found the food to be pretty delicious. I tried things like sisig in a pouch (kind of like a wanton filled with pig’s head parts and innards), as well as pork skewers and other yummy things. If you’re nervous about eating organs, just don’t ask! In case you’re wondering, I ate this meal pictured below at Mesa Filipino Moderne in Greenbelt Mall. 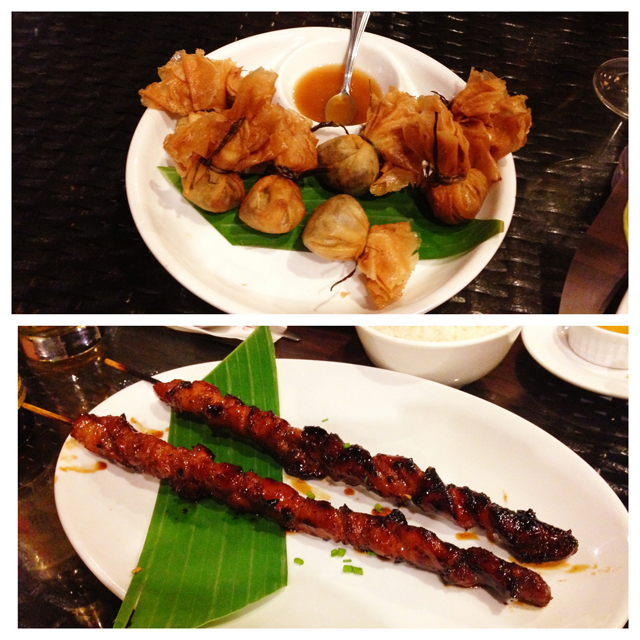 You can shop till you drop

If you like shopping, Manila has tons of enormous shopping malls, including Mall of Asia, Glorietta and Greenbelt Mall. My favourite is Greenbelt in the Makati district; who would have thought that the picture below was a shopping mall? It’s like a tropical jungle with lots of designer shops, and restaurants. There’s even a cinema here, so it’s a great place for an evening out. 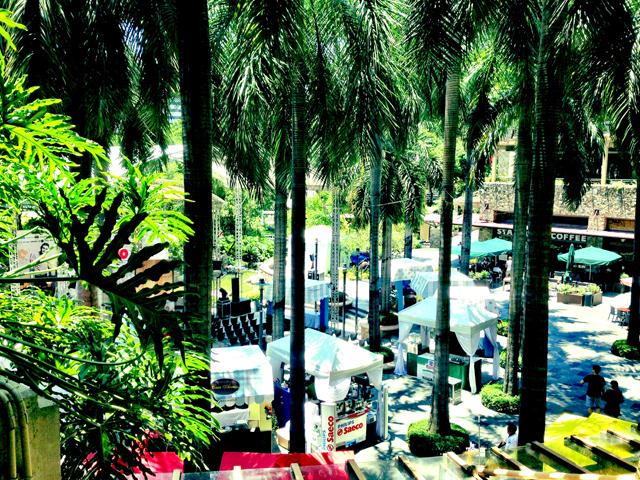 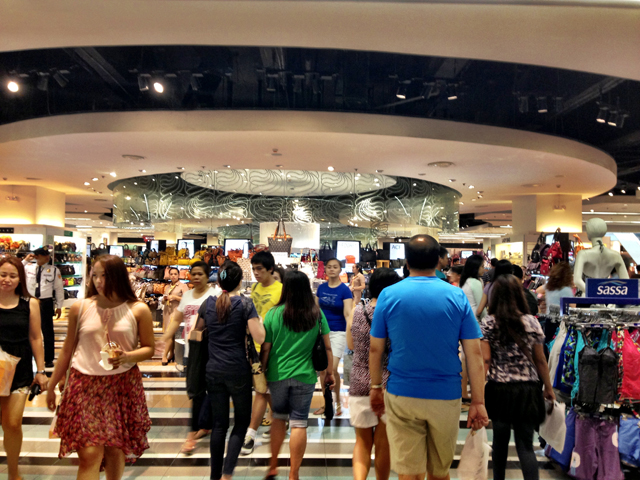 I thought the service was good in the USA, but Filipinos take service to a whole new level. There’s a reason that Filipinos are highly sought after in the hospitality industry around the world!

They are really into remembering names. In restaurants my server would ask me my name, then refer to me by name throughout the entire meal. They are so helpful, attentive and always smiling!

The Jeepney is so colourful!

Ahhh the jeepney, the funniest looking mode of public transportation I have ever seen. Overcrowded and colourful, Jeepneys have become a national image of the Philippines. Jeepneys originally came from U.S military jeeps left over from World War 2. They were sold or given to the Filipinos, who then customised them with vibrant colours and reconfigured them so they could fit more passengers. To me, they’re a symbol of how fun the Philippines actually is. 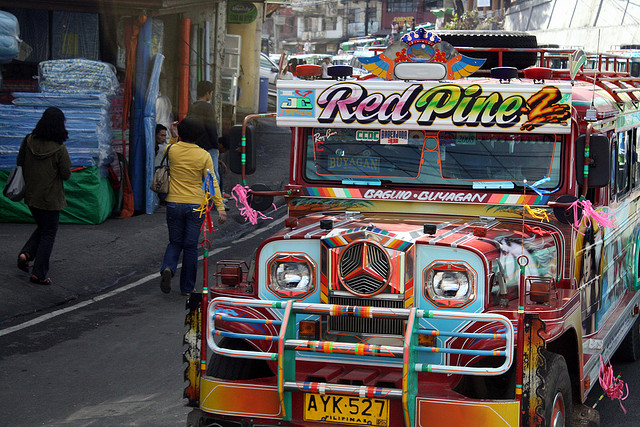 While in Manila you simply must do the Carlos Celdran Intramuros walking tour. It’s the best walking tour I’ve done anywhere in the world, and it will give you a fascinating insight into the history of the Philippines and Manila. Carlos Celdran is a fantastic storyteller with lots of character, and he brings the tour alive with funny jokes and props. It wasn’t just foreigners on the tour- there were lots of Filipinos who came along too. 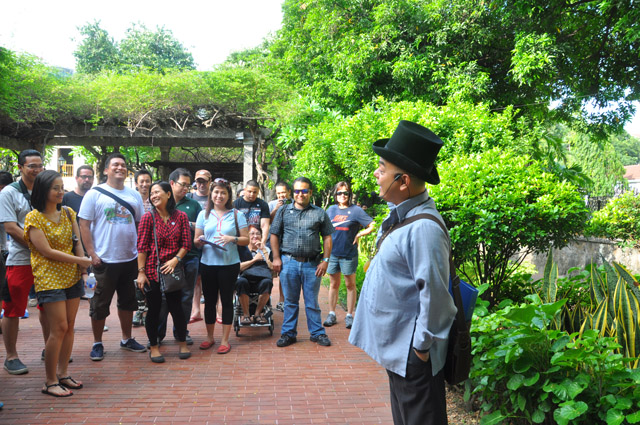 Because this guy stood like this, with drink in hand, the whole way home…

(OK so I know I said 10 Reasons Why…but here’s number 11) While in Boracay I took a boat trip to Ariel’s Point, which is a popular cliff jumping spot. On the boat journey home this Filipino guy stood perfectly balanced, with one foot on each pole, the whole way back to shore. What’s even better is he was holding a drink in his hand and pulled out the peace sign for this photo. 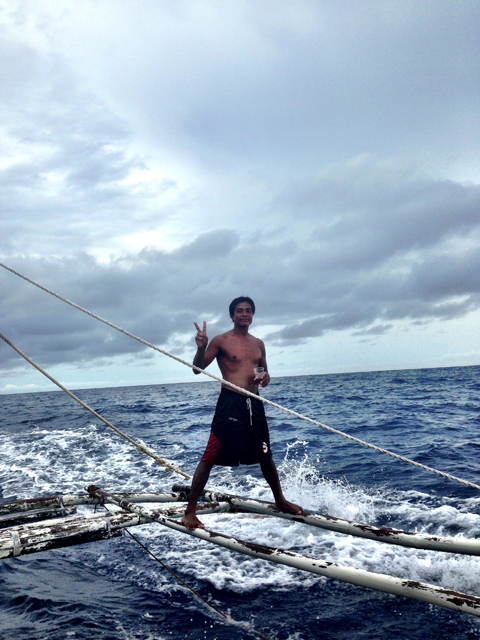 Have you visited the Philippines? What do you love about it? Leave your comments below!