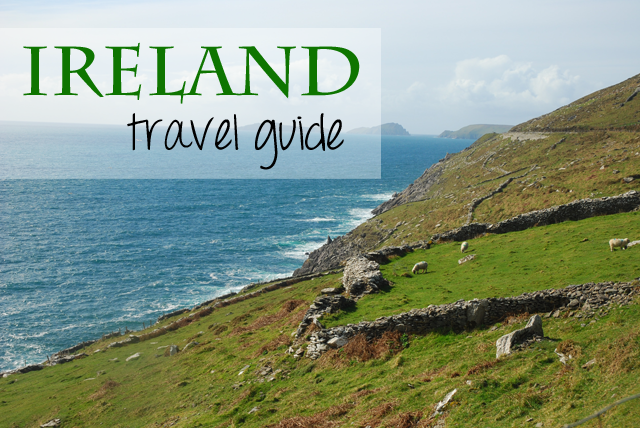 I absolutely fell in love with Ireland and its people. Irish people are some of the friendliest, funniest and chattiest people I’ve ever met, and let’s face it, the accent is pretty sexy too.

If you fly into Ireland one thing you’ll notice is how incredibly green it is- there’s a reason it’s known as ‘The Emerald Isle’. It’s not just the land that’s green- just about everywhere you go there are flashes of green. Its relatively small size makes Ireland a great place to travel around and there’s so much beautiful scenery to see. But most of all I love the spirit of Ireland- the warm cozy pubs, the Guinness, the singing, the dancing and the musicality of the people. It’s not uncommon for the Irish to just whip out their guitars and have a good sing song in the pub, or at home, or wherever they feel like. Since it’s a quick hop over the pond from the UK I’ve been to Ireland on numerous occasions and it’s always a good ‘craic’.

Note: Politically the land mass of Ireland is divided into the Republic of Ireland and Northern Ireland (part of Great Britain)- but for the sake of this travel guide I’m going to include both and cover the island as a whole. If you’re planning a trip don’t skip out Northern Ireland, as it’s well worth visiting the north to learn about the internal political, religious and social struggles that have been played out over many years.

Currency: Euro in Republic of Ireland, Pound in Northern Ireland.

Beer: Forget beer, it’s a pint of the black stuff you’re after! Guinness!

PS I Love You Ireland

Top 10 Things to See in Dublin

Paddywagon: An Unforgettable Tour of Ireland!

A Walking Tour of Derry

Visiting the Cliffs of Moher

Pour Your Own Pint at the Guinness Storehouse

My Best NYE Yet! Ringing in the New Year in Dublin

You can get to Ireland by flight or by ferry crossing from the UK.

I usually find Ryanair to be the cheapest airline flying to Dublin from Great Britain, but sometimes I’ve flown Aer Lingus. A number of airlines fly into Ireland- visit Skyscanner to compare flight prices for your dates, and read my guide on finding cheap flights. If you land at Dublin airport don’t bother with a taxi if you’re staying in the city- walk outside arrivals and buy a ticket for one of the airport coaches into town. There are several main dropoff points dotted around the city.

If you wish to travel by ferry there are two ferry companies that make the crossing- Irish Ferries and Stena Line. I recommend getting a Rail Sail ticket which includes your train from any National Rail station in England, Scotland or Wales, plus the ferry over to Ireland from Holyhead, Stranraer or Fishguard. It takes much longer than a quick one-hour flight, but there are some benefits to travelling by ferry. Rail Sail tickets start at £33 one-way, so you’re travelling last minutes and the flight prices have skyrocketed, ferry is actually the cheapest option. Secondly you don’t have to worry about the restrictive luggage limits that come with flying.

The most convenient way to explore Ireland is by renting a car so you can get to the more remote and scenic places. Remember they drive on the left hand side of the road in Ireland. Last time I visited Ireland I rented a car with Budget and the price was rather affordable- it’s even cheaper if you split the cost with a couple of friends. It’s worth noting that if you pick up or drop the car off at Dublin airport, you may go on some toll roads- if you do so you have till 8pm the following day to pay the toll online at www.eflow.ie, over the phone or by cash at Payzone outlets.

If you’re travelling alone around Ireland I highly recommend doing the 6-day Paddywagon Tour of all Ireland. It’s seriously the most fun I’ve ever had on a tour and the best bit is your transport is included! I made so many friends and there was plenty of ‘craic’ as they say in Ireland. You can read all about my experience on the Paddywagon tour here.

Failing that you can also travel Ireland by public transport using the trains and buses. Bus travel is a cheap way of getting around and Bus Éireann is the main bus line in the Republic of Ireland. Meanwhile Ulsterbus operates the buses in Northern Ireland. There are also a number of express buses between major destinations and airports, check out aircoach.ie, gobe.ie, gobus.ie and citylink.ie

Hotels in Ireland vary from traditional to modern. For an affordable stay in Dublin I stayed at the Eliza Lodge in Temple Bar and it cost €49 for the night for a double room. It was very small but the room was clean and I had great views over the river. I have also stayed at The Clarence, which is a gorgeous hotel part-owned by Bono from U2. The hotel is really conveniently located for sightseeing in Dublin and offers a high-level of quality and service. You can search for hotels in Dublin on sites like Expedia, Trivago, Booking.com or Hotels.com.

B&Bs are a fantastic option and a little more affordable. AirBnB is also a great site where people advertise their own rooms or apartments to rent. If you’ve ever seen PS I Love You you’ll know that Cameron Diaz and Kate Winslet did a home exchange, so check out www.HomeExchange.com if that’s something you’d like to try out. For vacation rental apartments check in with Dublin Escape.

For backpackers there are hostels in most towns around Ireland- visit Hostelworld to find a hostel in your destination. Here’s a list of the favourites:

The Irish love their potatoes…and their Guinness. You can’t leave Ireland without trying a pint of Guinness in a pub, or even better, in the Guinness Storehouse itself. Typical foods to try in Ireland include Irish stew, bacon and cabbage and full Irish breakfasts with black pudding. The food is warm and hearty, which is good because Ireland is often windy and freezing!

Food isn’t cheap, particularly in tourist areas. You’ll struggle to find something to eat for less than €10 and €20 will get you an average meal. Dublin is the priciest for eating but the cheapest eats are usually in pubs. There are also lots of great gourmet restaurants, so if you’re a bit of a foodie I recommend reading the Good Food Ireland website for some ideas.

In Ireland you can expect to experience four seasons in one day, so pack something to wear for every eventuality. The weather is highly unpredictable, so you could experience grey clouds, rain and sunshine all in one day. On thing Ireland never seems to lack is wind! I’ve visited Ireland at all times of year and have never been able to predict the weather.

Despite what other websites tell you about Ireland having a mild maritime climate because of the Atlantic Ocean, I’ve found it can be bitterly cold in winter from November-February. Pack your coat, warm boots, gloves, hat and scarf- then be prepared to strip off as soon as you find refuge in a warm cosy pub. You won’t necessarily see snow, but it does feel cold.

The best time to experience Ireland is over St. Patrick’s Day on March 17th each year, but be warned, everything books up in advance and prices skyrocket over the festivities. Spring (March-May) gets a bit warmer but again you can never predict the weather, so pack a variety of layers.

If you want warmer weather, try to go in the summer if you can, when the weather is much warmer and the days are incredibly long, with sun setting around 10pm at night! Peak season is June-August is the busiest and that’s when you’ll be able to go to the beach, but remember to wear sunscreen as the wind can disguise the actual strength of the sun.

If you’re planning to get away from Dublin and visit some more rural areas of Ireland, pack some rugged, sensible footwear in case you go walking. Forget umbrellas (they’ll turn inside out) and pack a rain/wind proof jacket.

Things To Do in Ireland