I’ve been to Oktoberfest twice; once in 2011 and the second time in 2012. I love, love, love Oktoberfest, but this year I found myself at a different German beer festival; the 168th Cannstatter Volksfest just outside of Stuttgart. 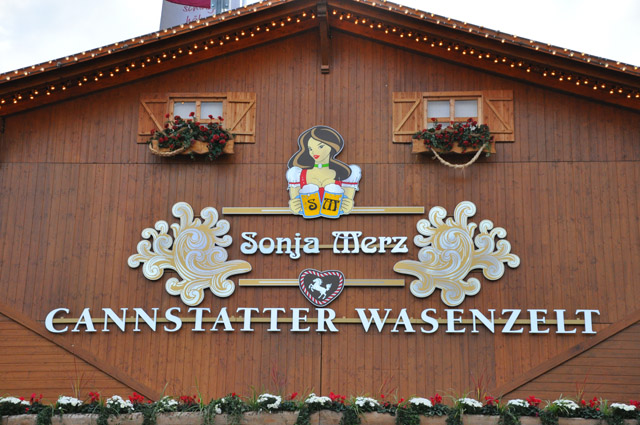 The Cannstatter Wasen is a 35-hectare area on the banks of the Neckar River and each year it plays host to the three-week Cannstatter Wasen beer festival, which usually starts around a week after Oktoberfest in late September/early October.

A gentleman from the Deutsche Bahn informed me it’s not wise to mention Oktoberfest- the rival festival- when you’re sipping beers in the Cannstatter Wasen, but I couldn’t help but compare the two. After all, Cannstatter Volksfest is considered to be the second largest beer festival after the one in Munich. Founded in 1818 by by King Wilhelm 1 of Wurttemberg and his wife Katharina, the festival now attracts around 3.5 million people annually. The centerpiece of this harvest festival is something called the “Fruchtsäule”, which literally translates as “fruit column”. 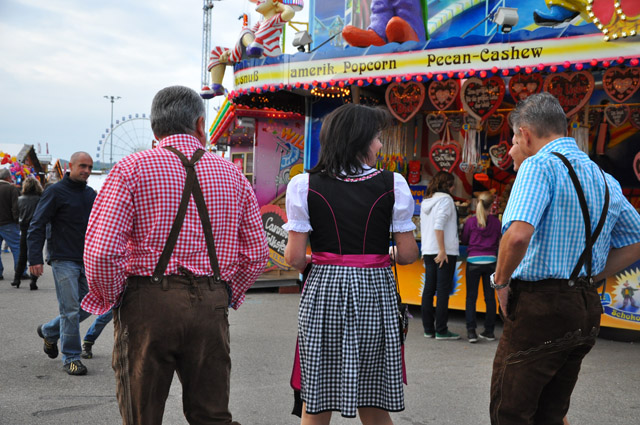 The fairground is a lot bigger than at Oktoberfest, with tons of stomach churning rides that made me feel sick just looking at them. To be honest I’m a big scaredy cat and I’m not good with rides, so I was entrusted with the bags while my fellow bloggers braved it! 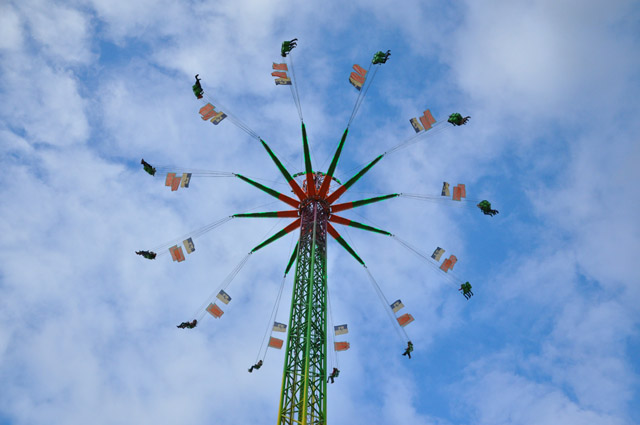 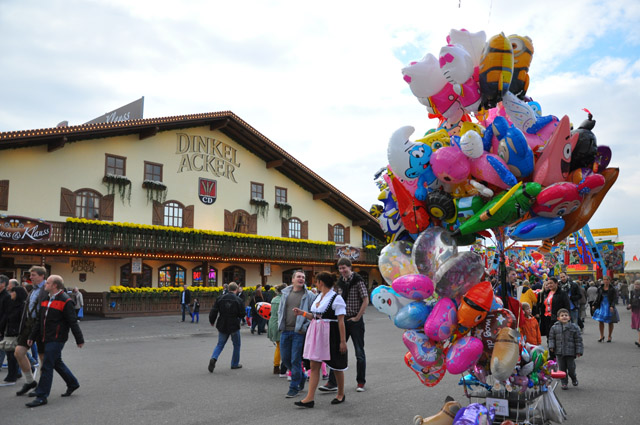 Just like at Oktoberfest there are also lots of food stalls serving foods like Bratwurst, roasted chicken, pizza and enormous heart-shaped cookies. We were given some chocolate covered strawberries and chillis to try- naturally I went straight for the chilli.

When I first bit into the chilli I thought it wasn’t hot at all, but as I got further in I discovered the seeds and soon my mouth was BURNING, although not as much as when I tried the world’s hottest pepper extract at Tears of Joy in Austin. 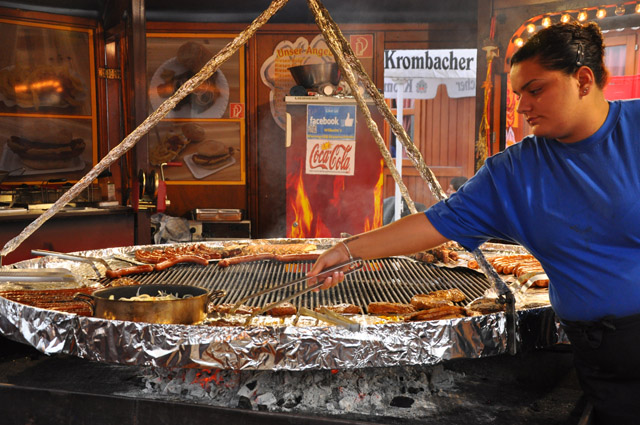 I skipped the ‘Star Flyer’ and the dodgems, but I did psyche myself up to go on the big ferris wheel for some spectacular views over the entire Festival. 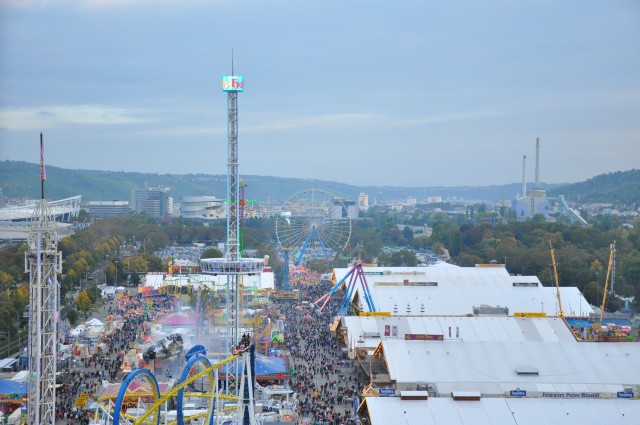 Afterwards we made our way to our beer table in the Alpine Village, which our guide told us was ‘a special place with individual cabins’. To be honest this doesn’t have the same atmosphere as the big beer tents and reminded me of a retirement village as it was much quieter. I even spotted a mobility scooter or two which demonstrates the average age of the clientele in this area. But as the beers started flowing and we satisfied our hungry bellies with roasted chicken, even this could be a good party.  We all relaxed and eventually we were dancing on the tables to a mixture of traditional German songs and various other pop songs from my childhood.

It was time to step it up a notch, so at 9pm we piled into one of the big tents, which I believe was called Grandls Hofbrauzelt, although my memory is a bit hazy. This was just like my memories of Oktoberfest- thousands of people dancing on tables and singing songs, drinking beer out of glasses bigger than their heads. We drank, we danced, and with each ‘maß’ the photos got more and more blurry. 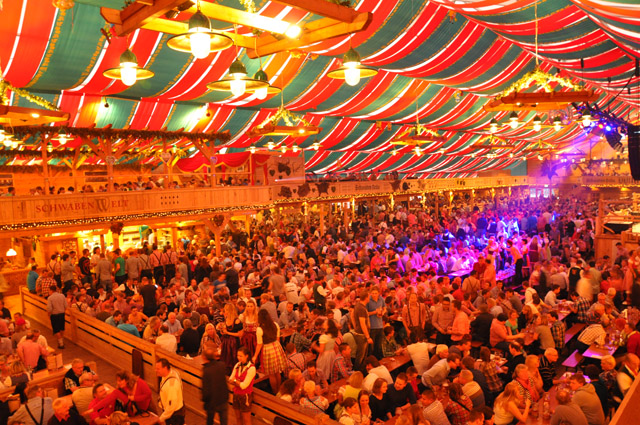 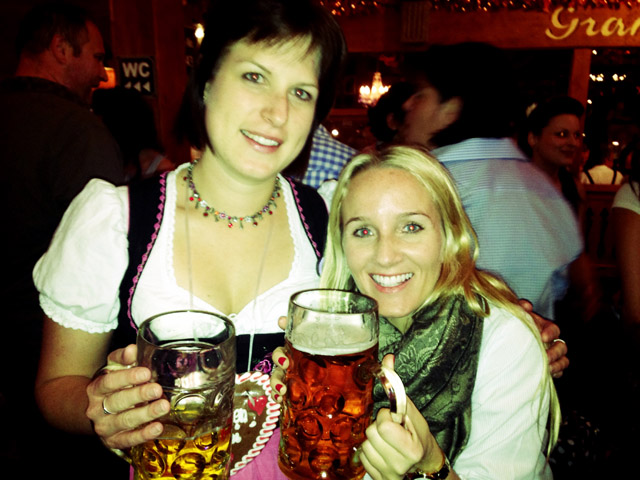 So would I recommend Cannstatter Wasen? Absolutely. If you can’t make it to Oktoberfest then this is a great option and has just the same atmosphere, with an even bigger fairground. Less people are dressed up in the Lederhosen and Dirndls here, but it’s still a fantastic beer festival. Accommodation in Munich gets SO expensive and is always fully booked around Oktoberfest. Stuttgart is also very busy around this time but I am told it is a little bit easier.

6 thoughts on “Move Over Oktoberfest: Drinking Beer at Cannstatter Wasen!”