With some of the best food in the world and exquisite architecture, it’s no wonder Italy is one of the most visited countries in the world. You just have to visit Italy at least once in your life and if you want to stay a while, there are plenty of opportunities to teach English in Italy. I’ve personally been to Italy four times to see the major cities, and I’d like to go back to explore more of the countryside and the coastal towns.

There are 5 cities in particular that stand out as being the most popular amongst travellers-explore them individually, or if you prefer, there are lots of Italian Tours that will take you on a whistle stop tour to see all of them in one go.

Florence is an incredibly beautiful city and gateway to the Tuscan region, so it’s a great place to start if you wish to visit the countryside and take a wine tour. Birthplace of the Renaissance, the city itself is a great place for art lovers and has some exquisite architecture. Major things to see include the statue of David, Piazza della Signoria and Palazzo Vechhio, Il Duomo, The Baptistery and Ponte Vechhio. Florence is also foodie-heaven, and has some of the best gelato in the country.

There’s just no place in the world like Venice. Built entirely on water, the roads here are replaced by canals and cars are replaced by boats. Venice is both hectic and peaceful at the same time- one minute you can be fighting your way through crowds of tourists in Piazza San Marco, and the next minute you can be lost in the quiet backstreet canals. Of course Venice is famous for its gondolas, and a gondola ride is definitely worth doing at least once in your lifetime.

Milan Malpensa is a major international airport and if you’re traveling to other destinations in Europe, at some point you will probably travel via this city.  Whilst Milan isn’t one of my favourite cities, it is known as the fashion capital of the world, so if you have the cash to spend, then you’ll want to head to Via Montenapoleone where you’ll find all the major designers like Dior, Valentino, Prada and Missoni. Milan’s major landmarks include the jaw-dropping Duomo and the Sforza Castle. 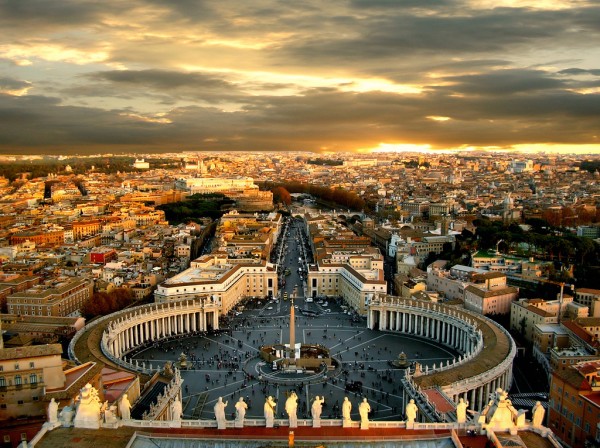 As the capital city of Italy and the seat of the Papacy, Rome is a must-visit on any tour of Italy. With a history spanning over two and a half thousand years, there are plenty of historic sights to see here, from the remains of the famous Colosseum to the ruins of the Roman Forum. Take a tour of the Vatican and gaze up at Michelangelo’s paintings in the Sistine Chapel, enjoy some of the country’s best gelado, and visit Rome’s best preserved building, The Pantheon. Before you leave, throw a coin in the Trevi fountain and you’ll be sure to return to Rome.

Think of Pisa and the first image that springs to mind is usually the famous Leaning Tower, but there’s so much more to this city than that. Located in Tuscany, Pisa is a university town with around 60,000 students, and there are plenty of other architectural sights to see including churches, palaces and bridges. The Piazza del Duomo (or Piazza dei Miracoli) not only houses the Leaning Tower, but also the Duomo, the Baptistry and the Camposanto Monumentale. The city has natural spas with thermal waters that are rich in minerals and are said to have therapeutic properties.