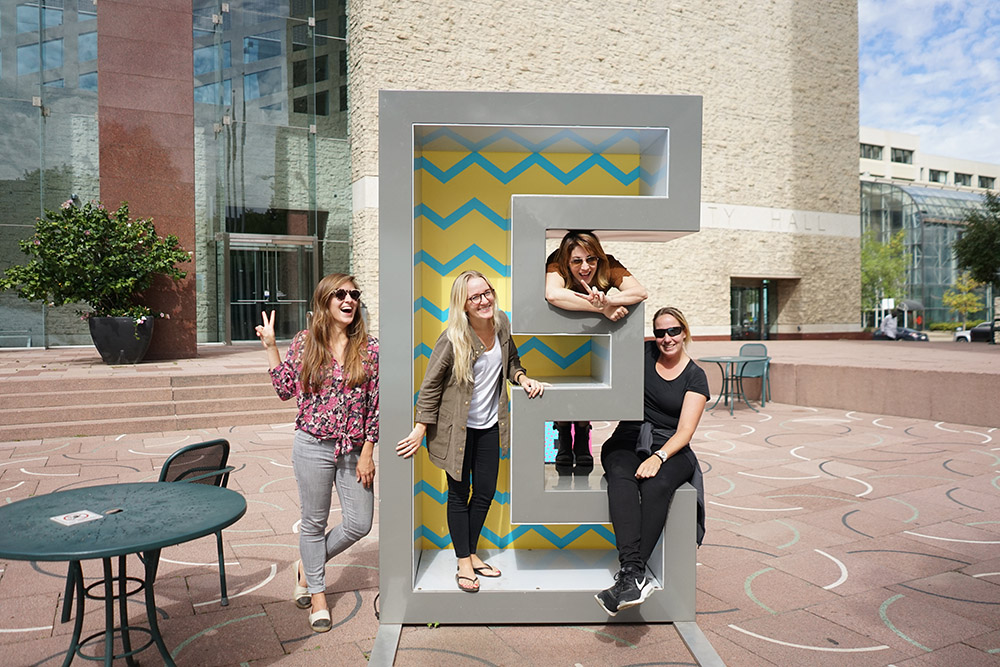 06 Sep 16 Totally Awesome Things to Do in Edmonton

Up until last month my only experience of Canada was Toronto, so naturally I needed to go back and see some more. This time I had the opportunity to fly to Edmonton on KLM with three Dutch bloggers – Vi from GirlsLove2Travel, Roell from We are Travellers and Claire who captures Sounds of Silence.

If I mention Canada most people start talking about Vancouver or Toronto, but I think Edmonton is an underrated city that deserves the limelight too. The city has lots going on for it; a really great foodie scene, the largest shopping mall in North America and a stunning national park only 45 minutes from downtown. The people here were really friendly and it reminded me a little bit of Portland or Austin in the sense that it’s super laid back with a cool, quirky vibe.  In the space of week we did so much and every single activity was worth mentioning on this list. So if you’re wondering where’s best to go, here are 16 really awesome things to do in Edmonton:

1. Watch a Show at the Edmonton Fringe 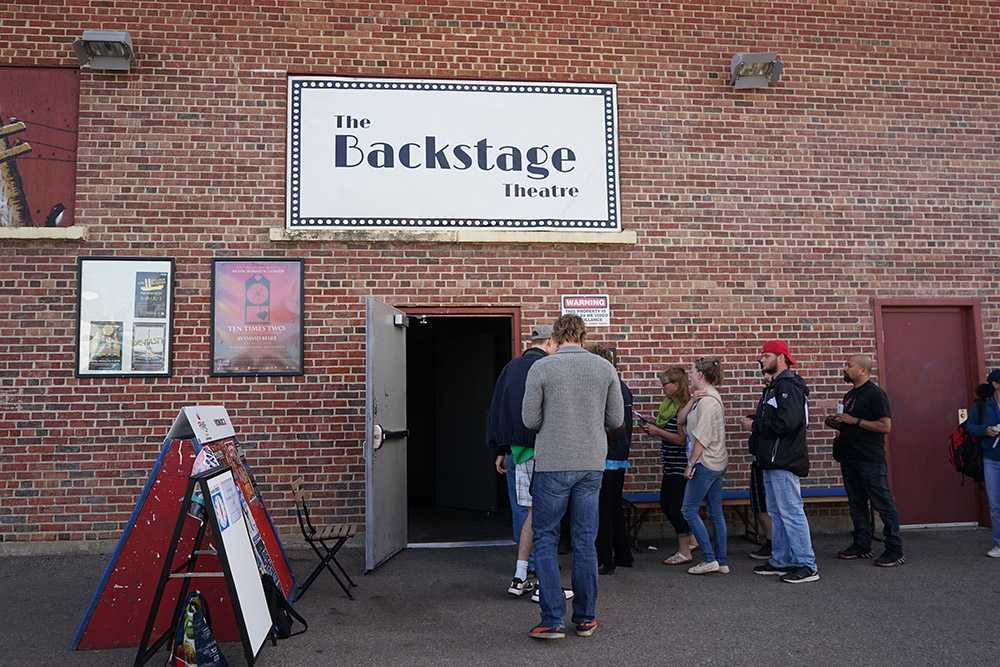 This year I had the pleasure of visiting Edmonton during their annual Fringe Theatre Festival, so the city was alive with street performers and food stalls. If you can visit at this time of year (August), make sure you get tickets for one of the shows. We saw ‘God is a Scottish Drag Queen‘, a one-man show starring stand up comedian Mike Delamon. Dressed in drag and putting on a Scottish accent, Mike tells an array of gags including one very funny one about Ken Ham and his $100,000 million project to build Noah’s Ark. Next year Mike says he’s going to come back as ‘the devil’ – Donald Trump!

We also had the opportunity to see Scratch, which was a hilariously funny improv show based on topic suggestions from the audience. At times it borders on the ridiculous but it had me laughing from start to finish. Definitely a must-see. Outside of the Fringe you can also try classic Canadian foods, like Poutine (chips with cheese curds and gravy) or green onion cakes. 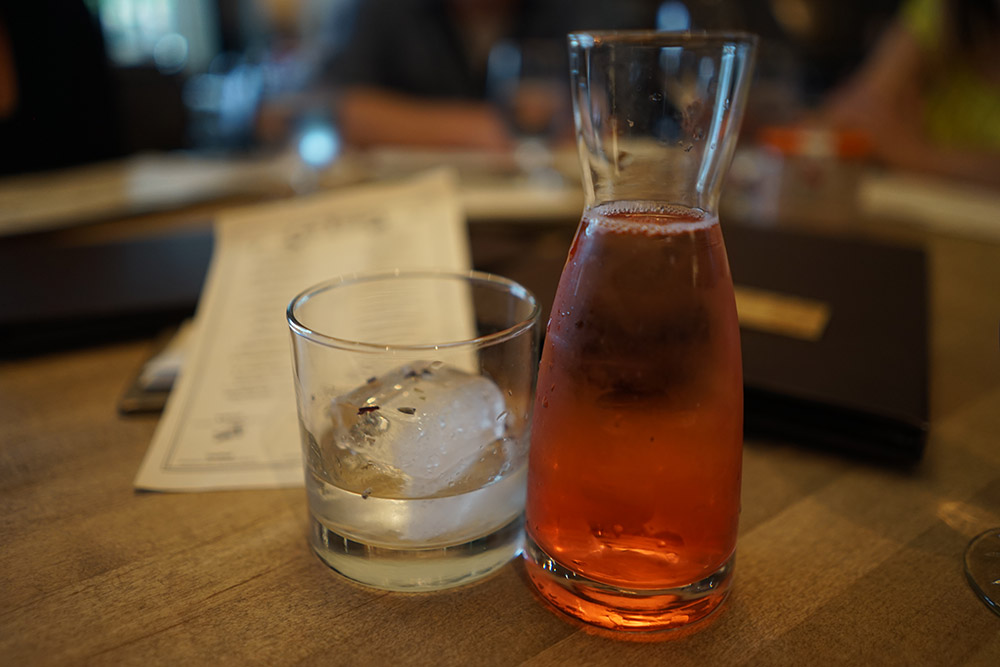 &27 or ‘Ampersand 27’ has an impressive selection of gin & tonics infused with aromas and flavours, so if you love a good G+T, this is the place for you. Their food is also excellent, with enormous charcuterie boards that are ideal for sharing. From their small plates menu I highly recommend the roasted cauliflower and the AAA Alberta beef tartar. 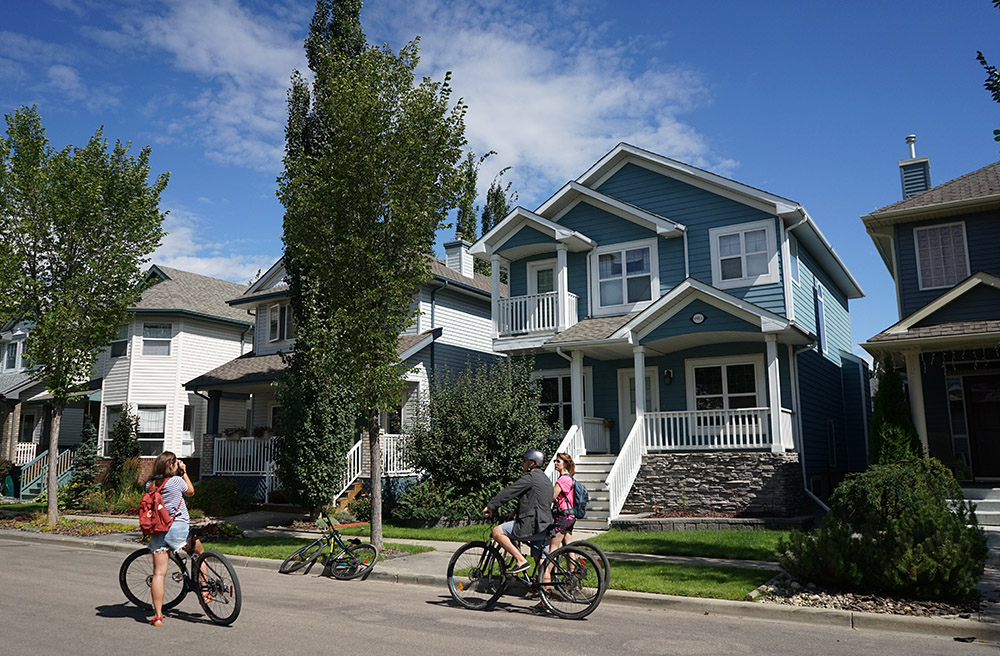 Biking the River Valley was definitely one of the highlights of my trip. I hadn’t ridden a bike since I was about 6 years old so I wasn’t feeling particularly confident at the beginning but as soon as I was on the bike I got into the swing of things. The views were really scenic and it was great to get some exercise while exploring the city at the same time. There’s a running joke that there are two seasons in Edmonton – ‘winter’ and ‘construction’ – so since some of the roads were closed, we had to do quite a bit of uphill biking. But I’m told that usually the trail is a lot easier!

4. Have lunch at Little Brick 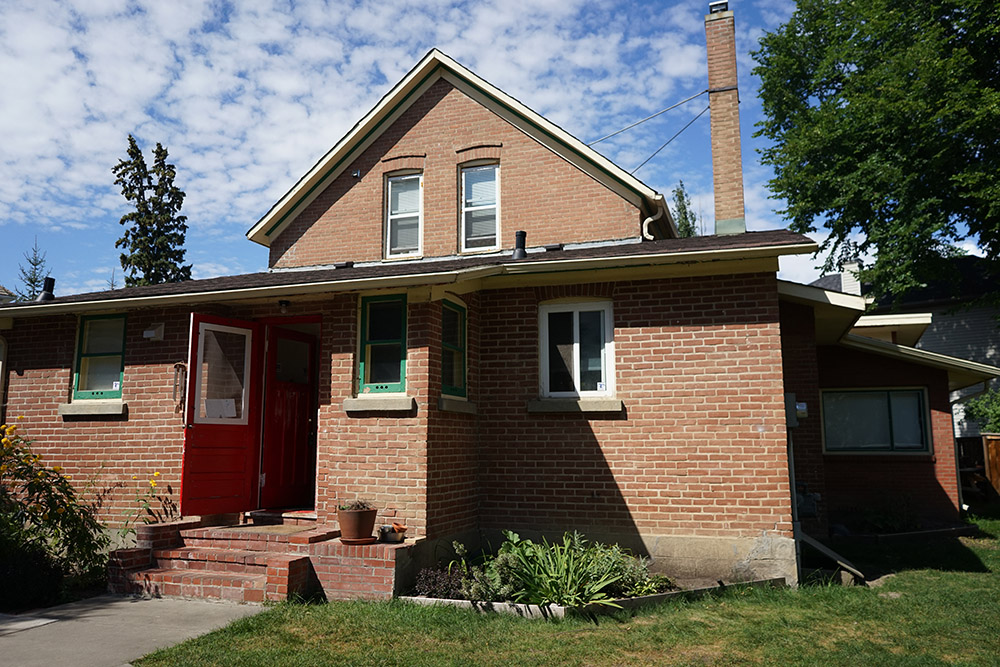 Little Brick is basically a coffee shop/general store inside a house in a suburban neighbourhood. It reminded me a little bit of being on Rainey street in Austin, Texas. We stopped here for lunch on a break from our bike tour and sat at picnic tables – it was a really relaxing spot with good coffee and healthy snacks.

5. See the Pyramids at Muttart Conservatory 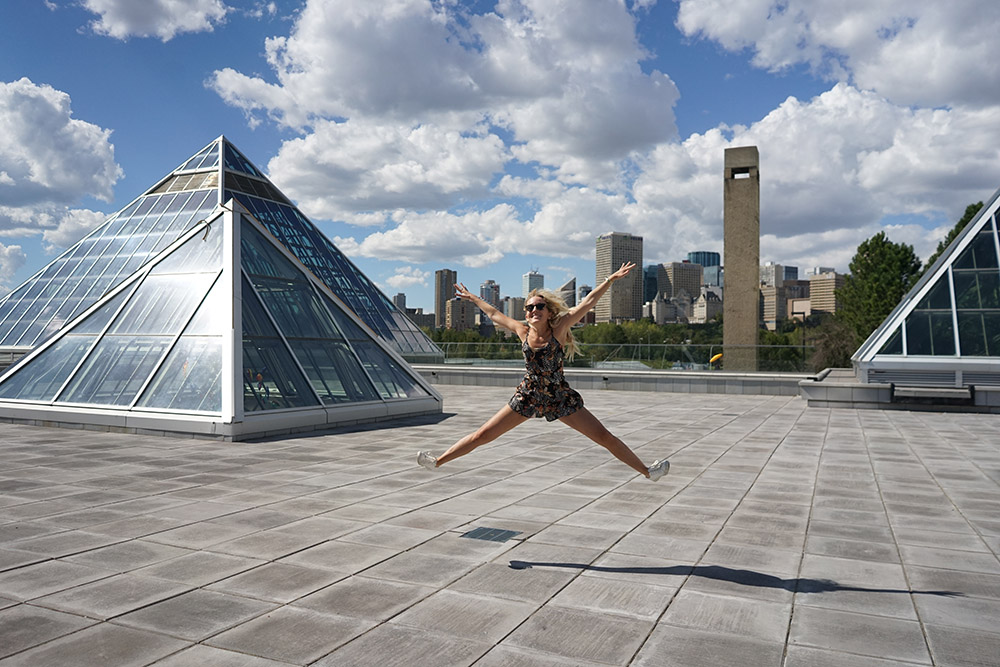 Forget the Pyramids of Giza – if you’re looking for an insta-worthy moment then head over to the Muttart Conservatory. The conservatory boasts three glass pyramids with arid, tropical and temperate climates – each housing different collections of plant life. The pyramids themselves make for some great photos, especially if you can get creative with the reflections.

6. Enjoy sundowners at The Fairmont 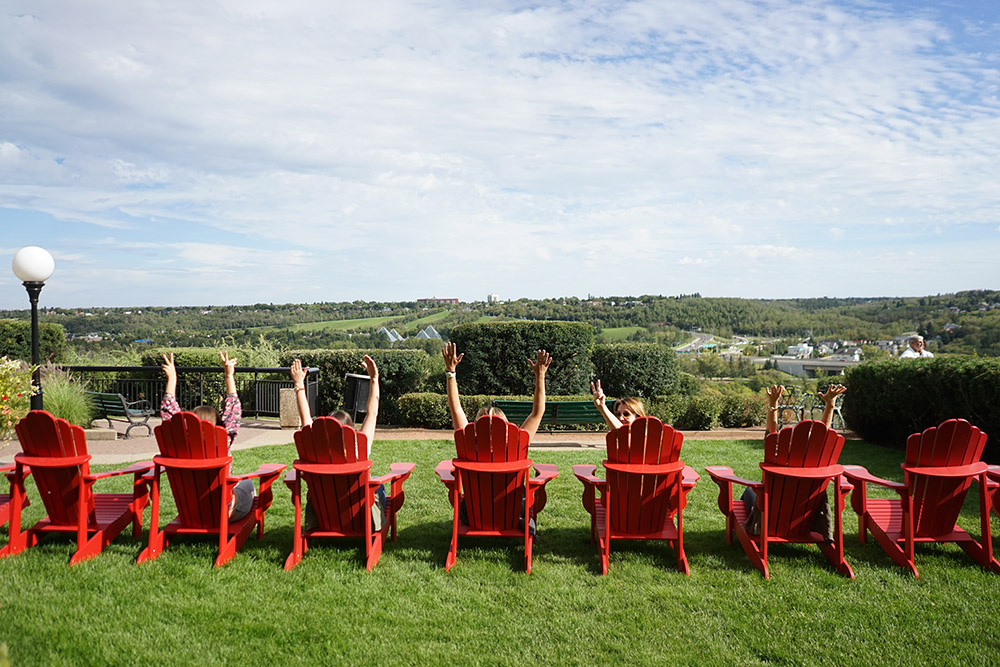 I love to go somewhere nice for cocktails and the terrace at The Fairmont Hotel Macdonald is a real treat. This historic hotel has existed in Edmonton since 1915 and exudes classic charm and elegance. The lawn also features some of the iconic red chairs that are usually found in Canada’s national parks. Order the Confed’s Ice Wine Martini made with 22 Belvedre vodka, ice wine and champagne!

7. Eat all the food at Uccellino 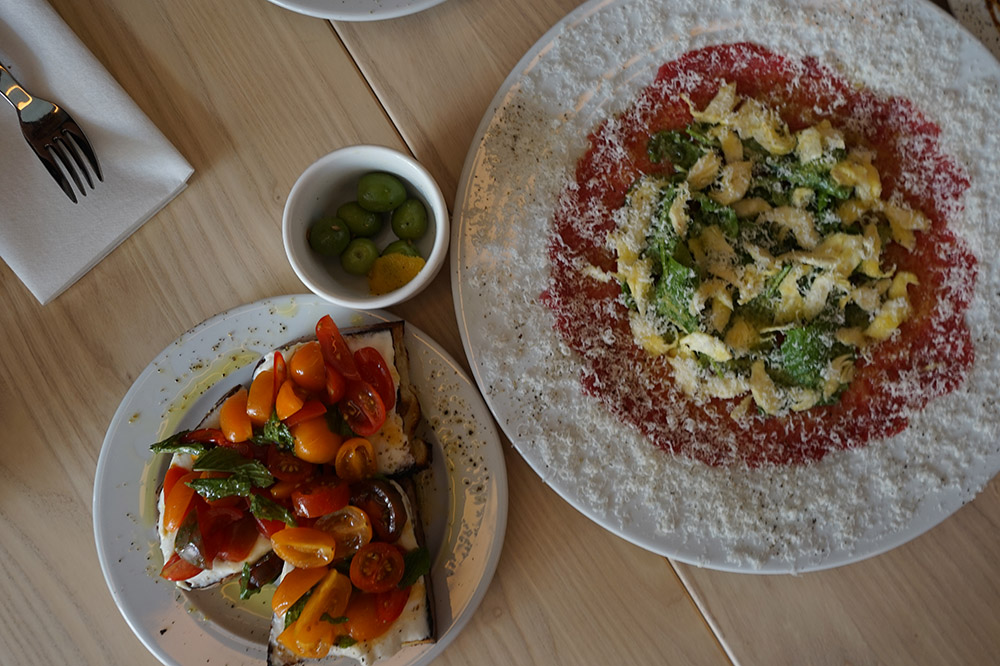 My meal at Uccellino was hands down my favourite of the trip. We went to dinner with Edmontonian food blogger Linda Hoang, who helped us choose some of her favourites from the menu. In hindsight we ordered too many dishes as the portions were actually quite substantial but everything was incredible. Often it’s hard to find really good Italian food outside of Italy but in this case I’d say it’s one of the best Italian meals I’ve ever had. I’ll never forget the chicken! Called ‘chicken cooked under a brick’ this chicken was ridiculously succulent and juicy with a nice crispy skin.

8. Go back in time at Fort Edmonton 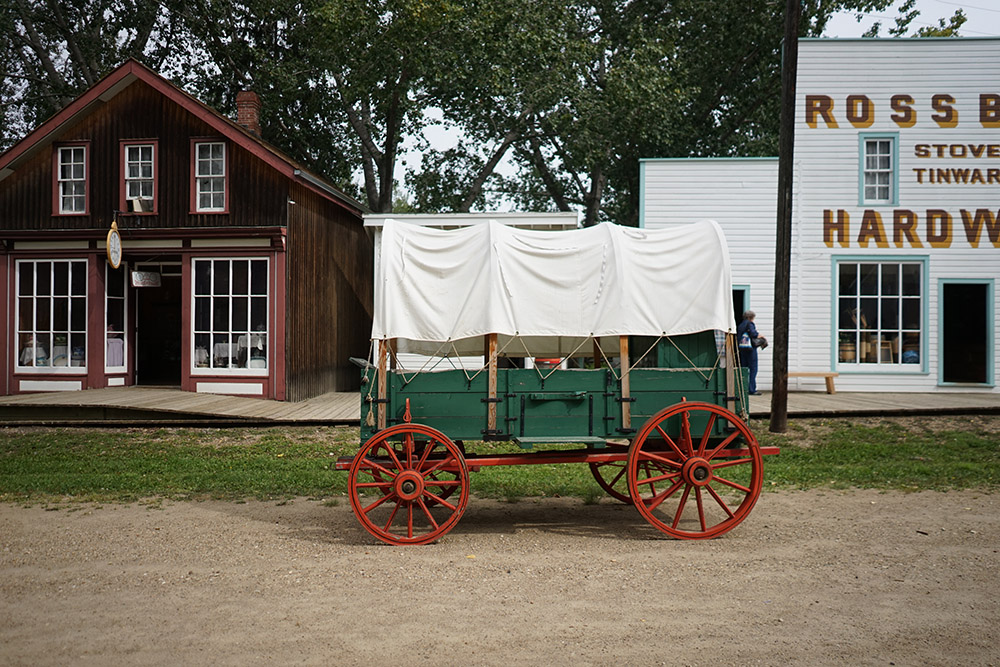 If you’re into your history or you’re looking for a day out with the kids then Fort Edmonton Park may just be the place for you. A historic steam train takes you to this living history museum, which is divided up into four sections, each representing a different era. First we arrived at the Hudson’s Bay Company fort (representing the fur trade era) where we were taken on a guided tour of the house. Afterwards we visited a small aboriginal camp where we learnt about Edmonton’s aboriginal history, before walking down 1885 Street, which features a wagon, a Methodist Church and a saloon. 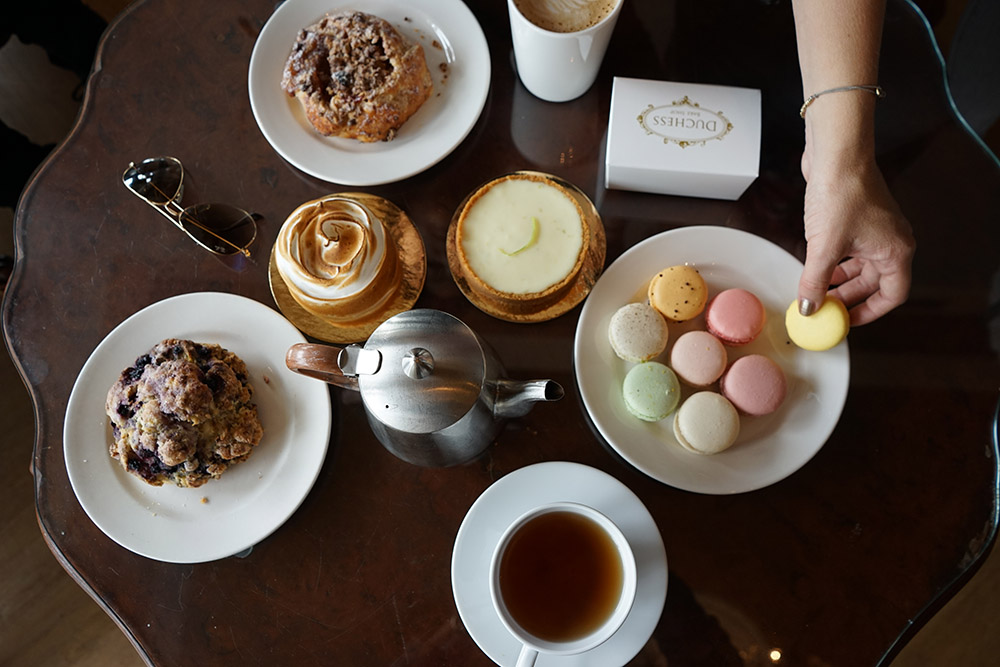 Now personally I don’t have much of a sweet tooth but I’ll make an exception for Duchess Bake Shop. From croissants and cookies to delicious cheesecakes and macaroons, this cafe makes some really exquisite baked goods. My personal favourite was the lemon meringue cake – each mouthful was like a little drop of heaven. The decor inside has a fancy tea room sort of vibe, so it’s definitely worth waiting for a table. 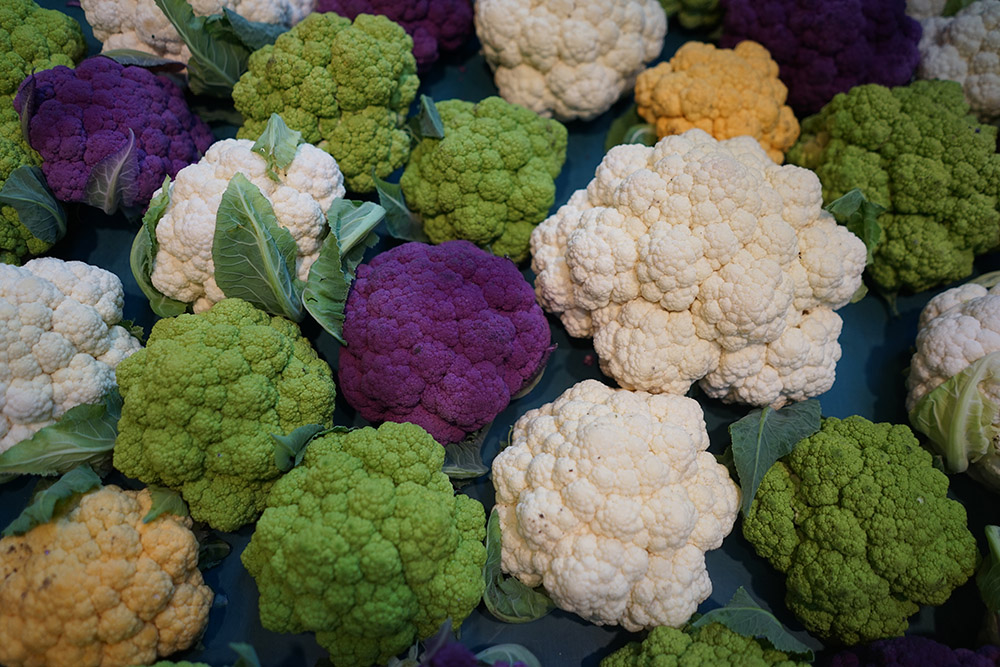 If you enjoy tasting fresh produce then I’d recommend visiting one of Edmonton’s Farmer’s Markets. Old Strathcona has lots of stalls selling fresh produce such as cherries, cheeses and even brightly coloured cauliflower. Did you know they can naturally come in purple and yellow colours as well as white?! 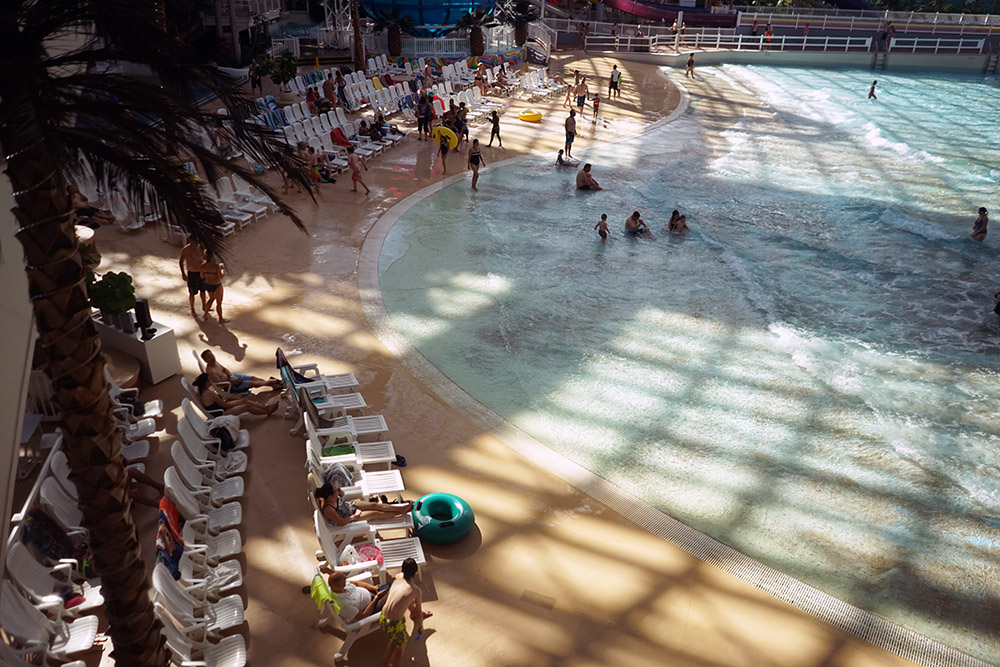 Before I visited Edmonton I had no idea that it was home to North America’s largest mall. I thought that title might have gone to Mall of America. This West Edmonton Mall isn’t your average mall; it boasts a roller coaster, a skating rink and an indoor water park where you can take surf lessons. But really I just had one thing on my mind and that was handing over my credit card to buy things. I prepared for shopping like I was getting ready for an olympic race, visiting as many stores as possible in the time available! 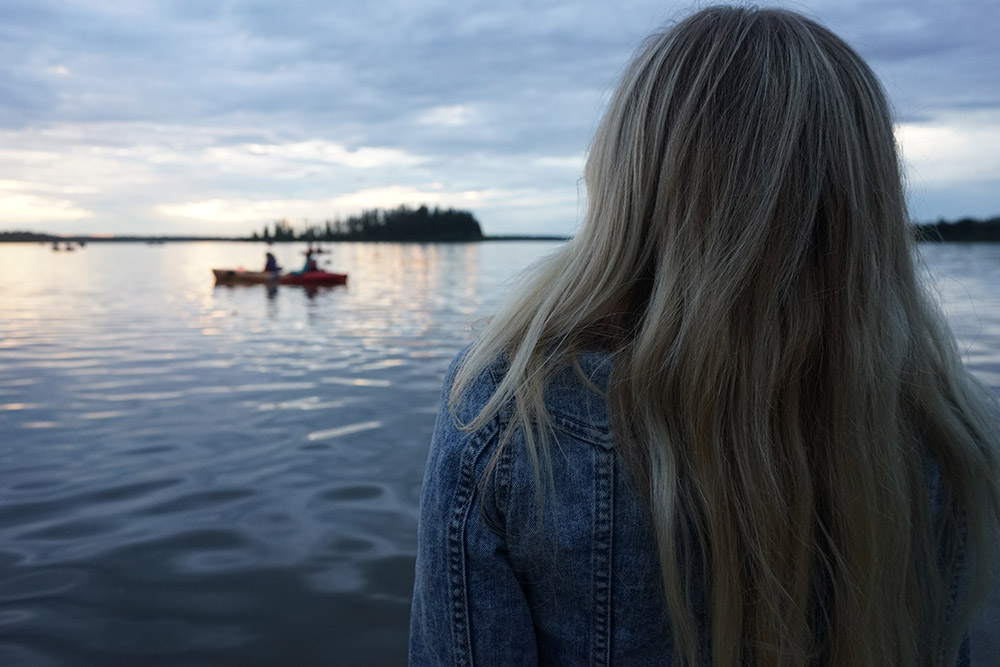 If you want to get in touch with nature and have a true Canadian experience then pay a visit to Elk Island National Park, which is known for its bison herds. Sadly we didn’t see any bison there (I think it was just too hot for them when we were looking) but if you’re driving around at dawn or dusk then you’re more likely to see them. We did however stop to take a tour of the bison handling facility before hopping in a canoe and paddling around peaceful Lake Astotin.

We also had a truly magical experience enjoying a long table dinner under the stars. Prepared by Chef Brad Smoliak, the fine dining menu features ingredients and flavours from the area, including an incredible bison roast. The menu costs $150CAD per person and covers admission to the park, as well as beer and wine pairings. There are only 24 seats at the table and with only 5 sittings per year, you need to book well in advance. For more details, visit this page. 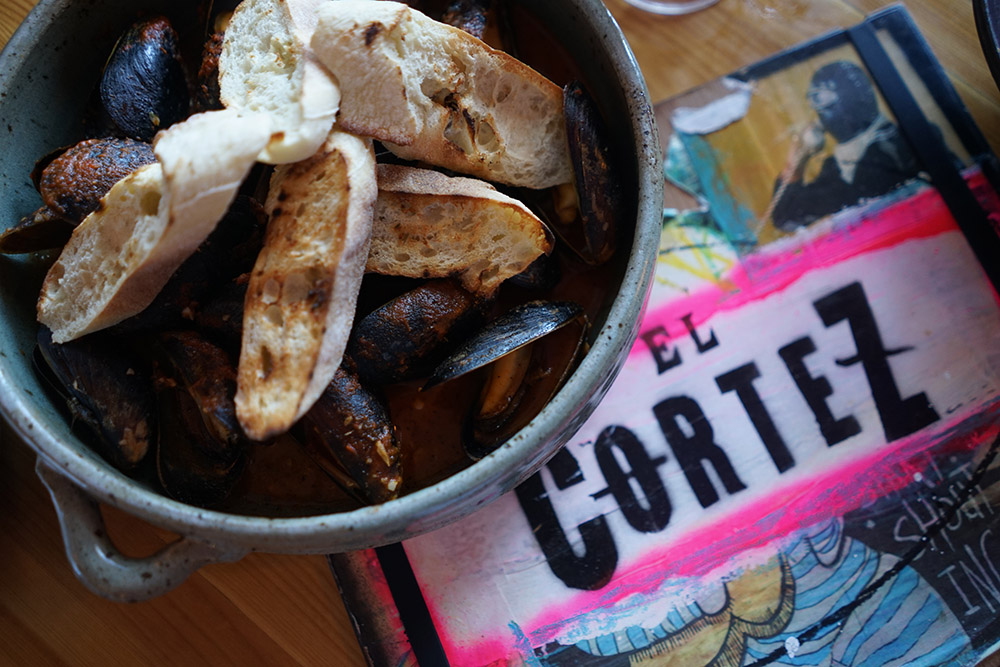 I love Mexican food and it’s one thing I really miss when I’m back in the UK. In Edmonton we paid a visit to El Cortez – a Mexican restaurant serving a wide selection of tequilas and delicious margaritas. The decor is a little bit hipster and funky, with a sign on the wall that says “Find what you love and let it kill you.” Perhaps not the best dating advice I’ve ever heard 😉

I had the mussels with a salsa Mexicana, butter, cerveza, smokey rojo, followed by the shrimp and snapper ceviche with Serrano, lime, tomato and olive. Both were delicious. 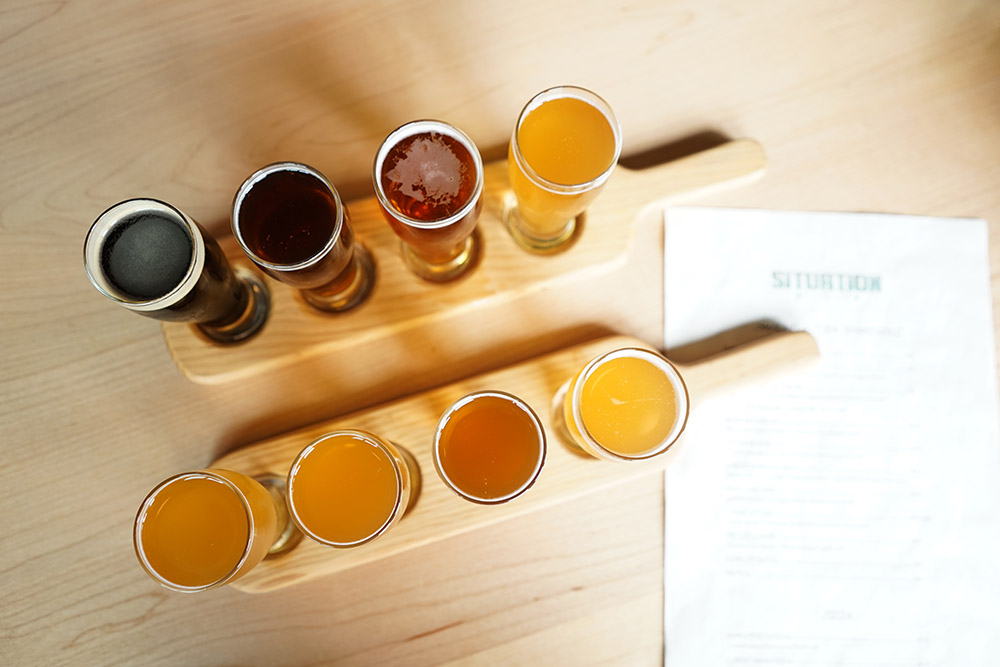 I’m a huge fan of craft beers. I love a good stout, an amber, an IPA, a pale ale…anything that’s not a watery lager like Heineken or Coors Light. The Situation is an awesome brew pub with a difference – you can actually see the beer being made in the microbrewery and get to taste it in the bar afterwards. It’s worth ordering some food to soak up the alcohol –  the mac ‘n’ cheese and the beer mussels are really good. 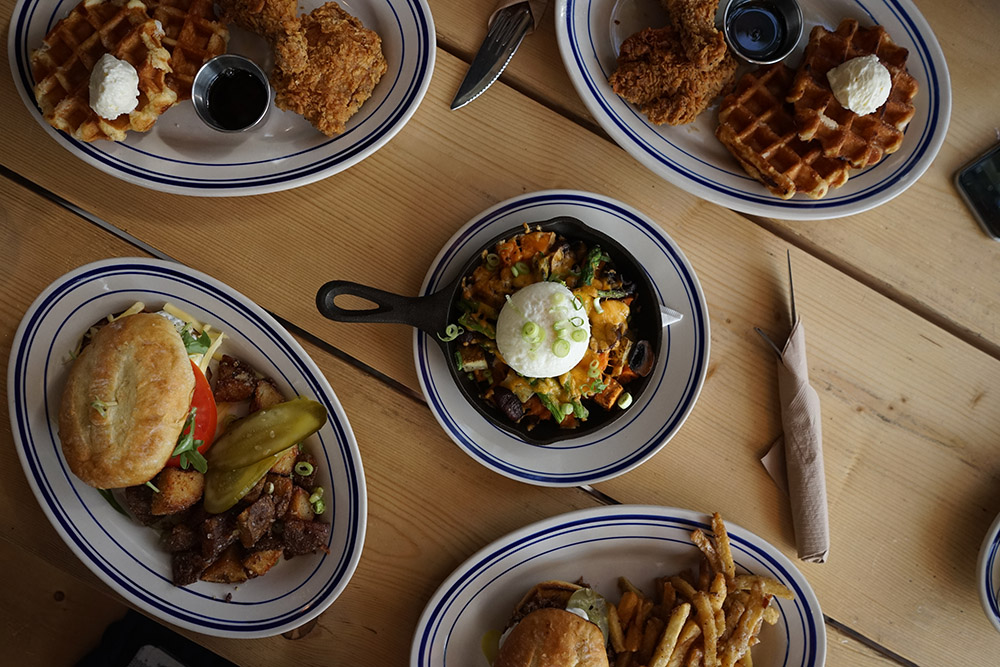 It may be called MEAT For Dinner, but meat for brunch is also pretty tasty. And even if you’re a vegetarian, they do have a couple of meatless brunch options on the menu. Their hash is really, really good, as is their brisket burger with garlic fries. If you’re a fan of salty and sweet, their chicken and waffles is a firm favourite too. 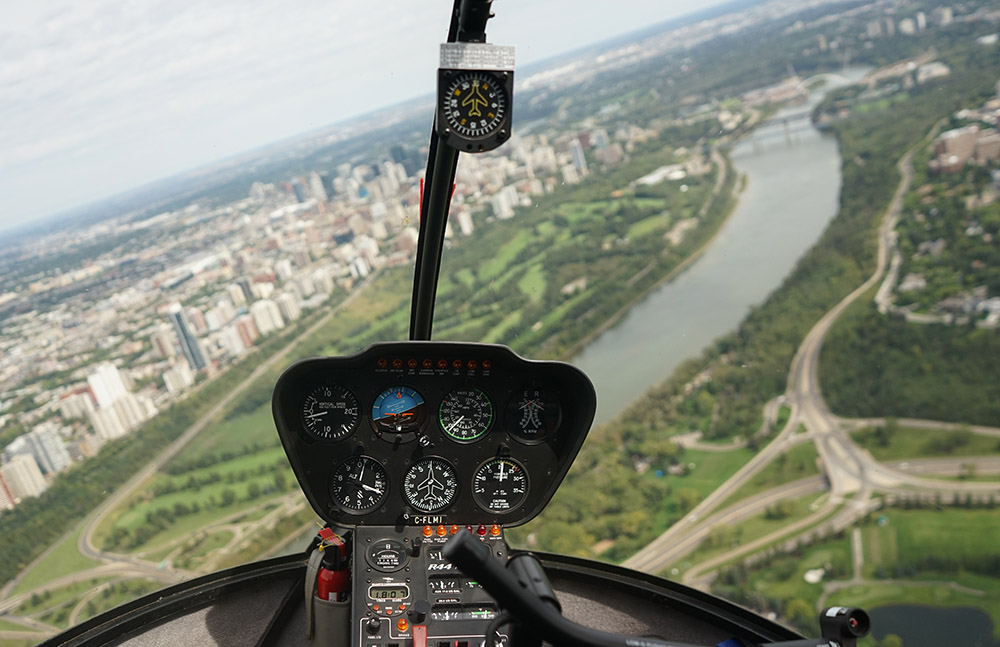 Before catching our flights out of Edmonton airport we did have one last thing on the itinerary – a regional helicopter tour! I’ve been on a helicopter twice in my life – the first time was when I worked on a TV show called Helicopter Heroes and the second time was in South Australia. However for the rest of the girls it was their first time and it was so exciting for me to see the looks on their faces. The views of downtown were absolutely incredible and it gave us a much better sense of where everything was. We flew over the river and we even landed on it, which was really cool because we got to take-off again, causing ripples through the water.

Have you visited Edmonton? Do you want to now? For more information about all the things to do in Edmonton, visit http://exploreedmonton.com/.

I was a guest of Explore Edmonton on this trip but all opinions expressed here are my own. It was just super awesome.