With heavy traffic, huge high-rise buildings and oppressive humidity, it can take a while to adjust to life in Bangkok. Thailand’s capital is a big, chaotic city, but don’t let this put you off. As you explore further you’ll find opulent palaces, colourful markets and all kinds of nightlife.

When I visited Thailand for the first time, my friend told me I shouldn’t spend any time in Bangkok on my way to Koh Samui. “There’s not really much to do there but shopping and it’s dirty” she said. Having lived in Singapore her entire life, she and her family had taken many trips to Bangkok. So I guess it’s not for everyone.

Me on the other hand, I loved Bangkok, like many other nomads living there. I had two nights and three days in Bangkok and I honestly felt I didn’t have enough time there. There’s something about its energy, the colours, the grand elaborate temples, the gold Buddhas, the smells, the food, the crowds of people and the luxury high-rise hotels that make Bangkok so different and appealing. Plus you can get some really good deals on flights to Bangkok, so it’s a good place to stop over in Asia for a few days. Here’s a list of my top things to do if you have a few days in Bangkok.

1. Take a river boat on the Chao Phraya river

No visitor to Bangkok should miss seeing Bangkok from the river. A great way to get around Bangkok without the hassle and hustle and bustle of traffic  is by the Chao Phraya Express. There are stops all along the river bank and its a quick and cheap way to get from one place to another. 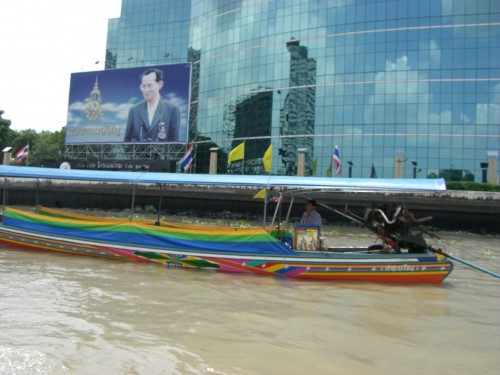 Wat Arun is on the other side of the river and can be accessed either by taking a taxi across the bridges, or by cross-river ferry. The Chao Phraya Express also has two stops on that side of the river: Thon Buri Railroad Station and Phrannock. Wat Arun is named after Aruna, the Indian god of dawn and stands at around 79m high. It is covered in broken pieces of porcelain and is clearly visible on the bank of the river. You can climb the steep steps of the temple to see the spectacular views it offers of Bangkok. 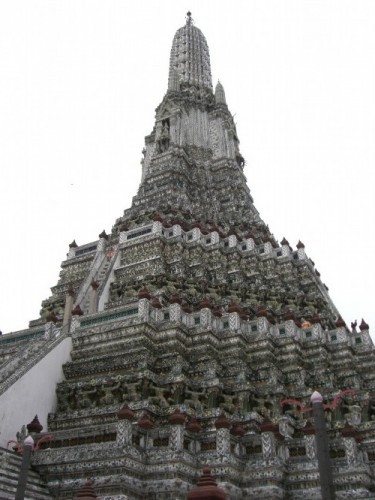 Not many people I know who’ve been to Bangkok have been to Dusit Park, but this was my favourite part of the city. If you’re tired of the hustle and bustle, the hoards of people, the traffic and the pollution, Dusit Park is a haven of green and tranquillity. The park is a result of King Chulalongkorn’s attempts to Westernize Bangkok, by creating a green space with manicured gardens and teak mansions. Highlights of the park include Vimanmek mansion and the Abhisek Dusit Throne Hall. Vimanmek mansion is the largest golden teak building in the world and was the summer palace of the royal family. It’s colour themed rooms contain fascinating artefacts and are open to visitors. 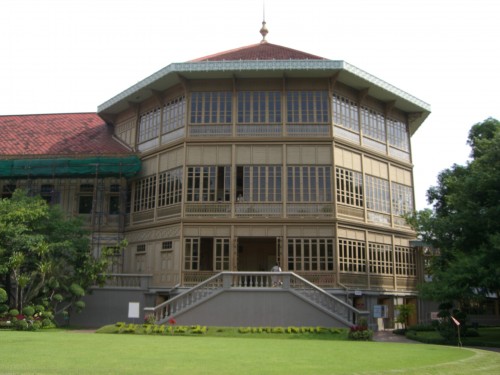 4. Have a cocktail in the Vertigo Bar

The Vertigo Grill and Moon Bar on top of the Banyan Tree hotel offers the best view of the city by night. On the roof of the 61st floor, at 196 metres high, you can sip on a cocktail and gaze at the twinkling lights of Bangkok below. Aptly named Vertigo, this open-air bar isn’t for those who are scared of heights and is only open weather permitting. 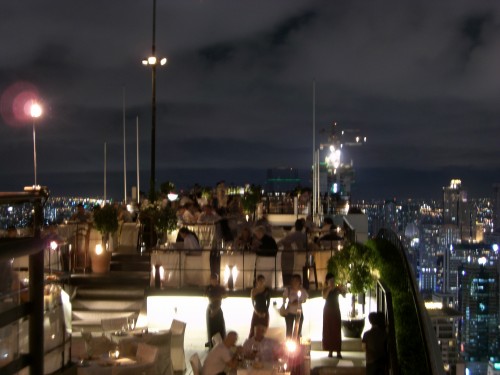 5. Take a photo at the Grand Palace

The elaborate Grand Palace and Wat Phra Kaeo are the most photographed sights in Bangkok. Work began on the Grand Palace under King Rama I in 1782 to provide a home for the King and a resting place for the Emerald Buddha. The Royal Family no longer lives in the Grand Palace, having moved to the Dusit area, but tourists visit this spectacular site to see Thailand’s holiest temple, Wat Phra Kaeo. 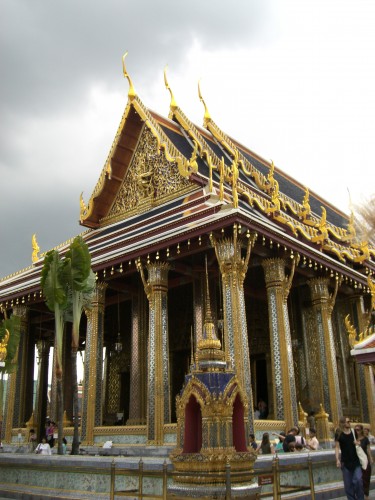 Wat Pho is Bangkok’s oldest and largest temple, built in the 16th century, and is a place of learning and traditional medicine. Since the 1960s Wat Pho has been home to the most respected massage school in Bangkok and visitors can enjoy a massage or take a course in Thai or English. The Chapel of the Reclining Buddha was built by Rama III and the impressive 46 metre gilded sculpture of the reclining Buddha fills the whole chapel. 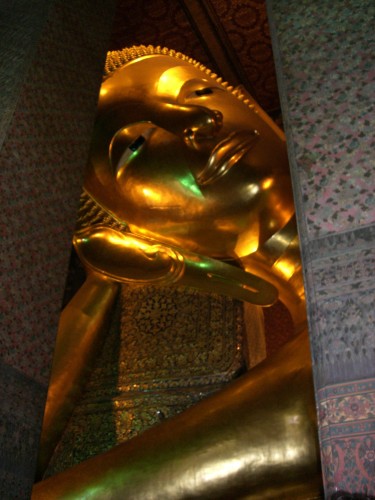 Chinatown is a colourful, noisy, busy area and home to Bangkok’s Chinese community. The Chinese residents used to live in the area where the Old City is, but Rama I decided to move the capital city across the river in 1782, and in doing so relocated the Chinese community. Chinatown is dotted with Chinese shrines and the streets are packed with market stalls, gold shops, Chinese medicine stores, wholesale spice shops and snack stalls. Whilst you’re there, eat some dim sum in one of the many Chinese restaurants. 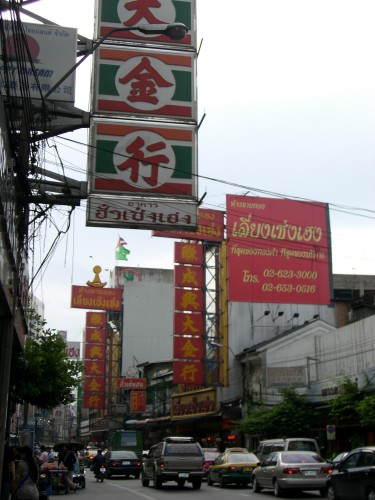 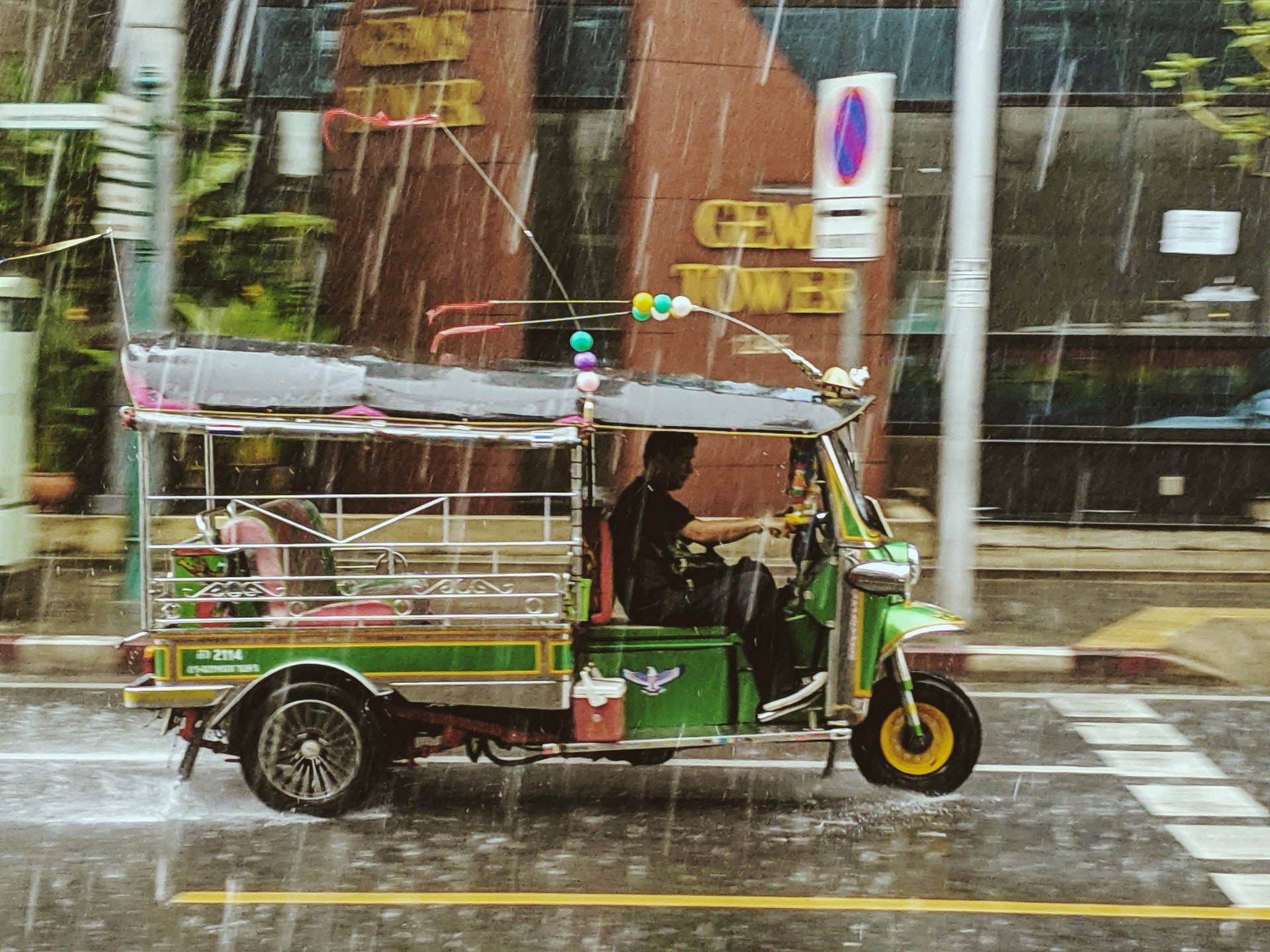 Taking a ride in a Tuk Tuk is a fun and novel way to get around the city of Bangkok although you should make sure you negotiate a price before hopping on. Unlike taxis, the Tuk Tuk’s aren’t on meters and the drivers will often try to tell you that a particular tourist site is closed so that they can take you to a tailor or another site further away. Be firm with them, negotiate and you’ll be fine . I foolishly believed a Tuk Tuk driver when he told me that the Grand Palace was closed because it was only open to local people, only to find out later it was open the entire time. I soon new not to believe them when I was told Wat Pho and Dusit Park were closed.

Jim Thompson was a famous American silk merchant who came to Bangkok in 1945. He became a social celebrity in Thailand, thanks to his contribution to the Thai silk industry, but mysteriously disappeared in 1967 whilst walking in the Cameron Highlands in Malaysia. His house is a great example of a traditional Thai teak home and one of the finest museums in Thailand.

10. Buy something on the floating market 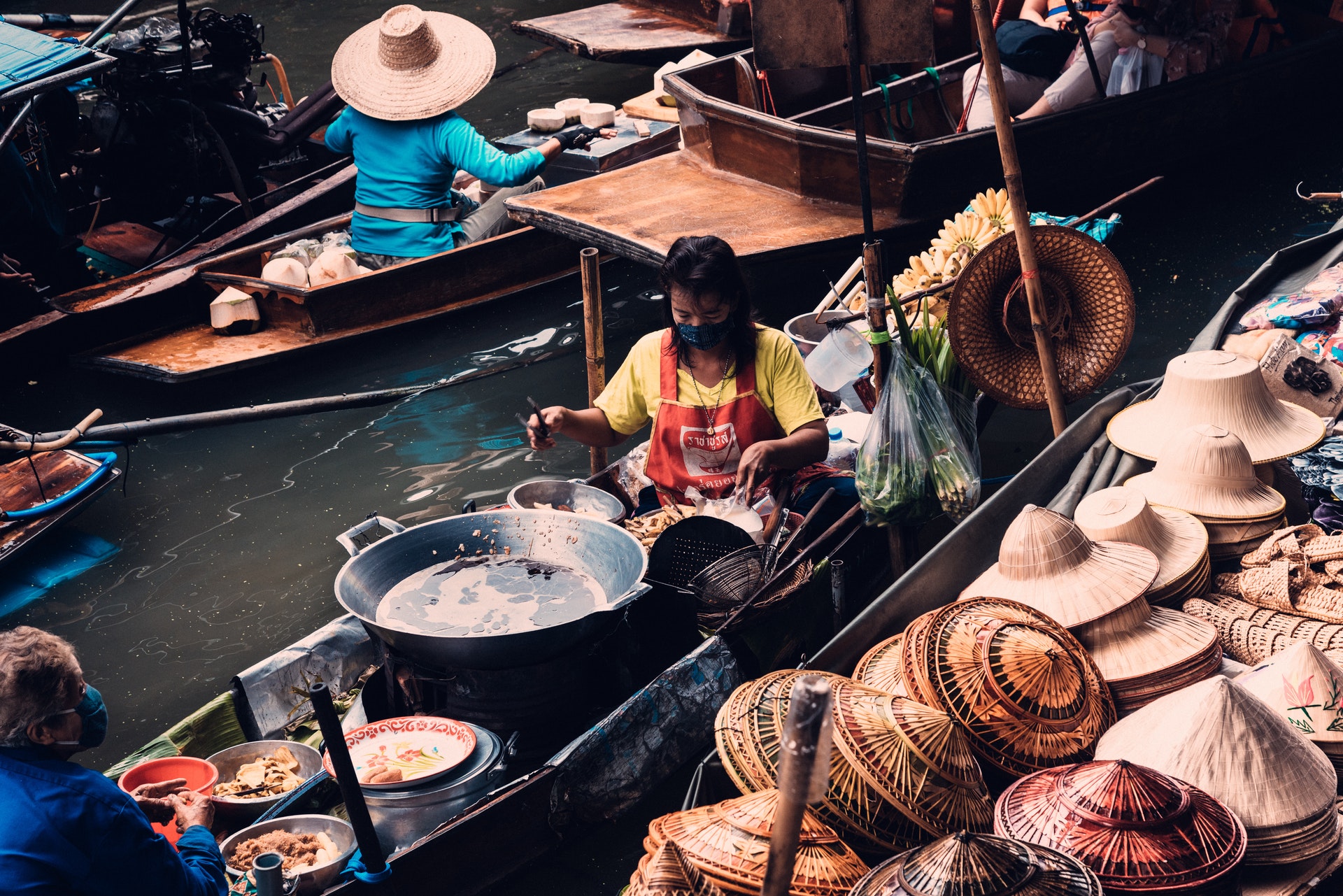 There are numerous floating markets in Bangkok but Damnoen Saduak floating market is the main floating market, although it is largely for tourists. It is best to take a boat through the labrynth of narrow canals, filled with wooden row boats and vendors selling fruit, vegetables,  flowers, spices, straw hats and snack food. The market is located around 62 miles southwest of Bangkok and it is best to visit between the hours of 7am and 9am. 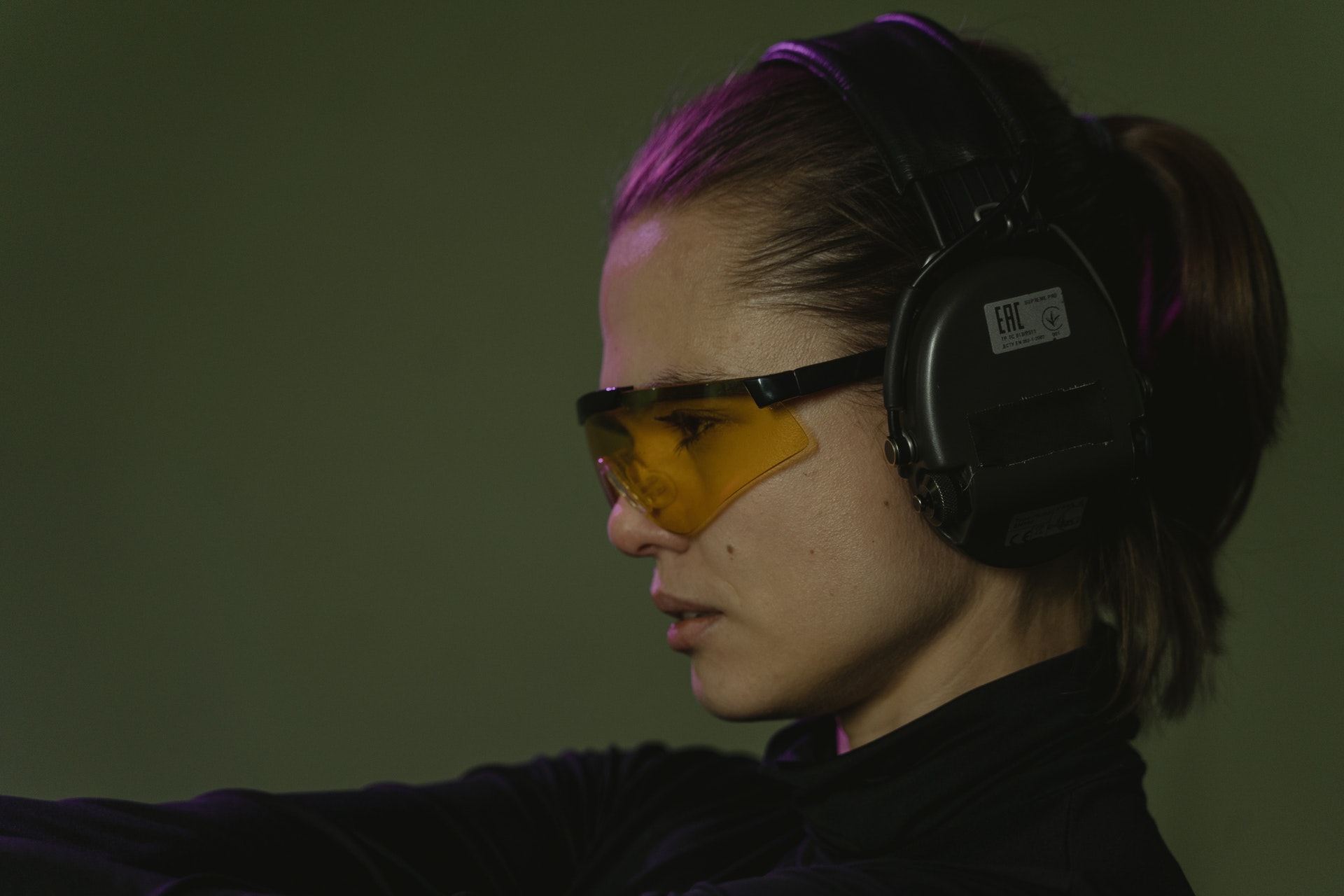 Go to a shooting range! Want to learn how to shoot and have do something bit different. Go to a shooting range in Bangkok where you can try shotguns, military rifles, revolvers and pistols – it makes for a super unique experience. Never shot a gun before? Don’t worry! Licensed English speaking instructors will show you the ropes.